Can i please request members to review my portfolio and give in their thoughts.

Below is the reason for my investment along with risk factors i am considering. Would be great to have your views. 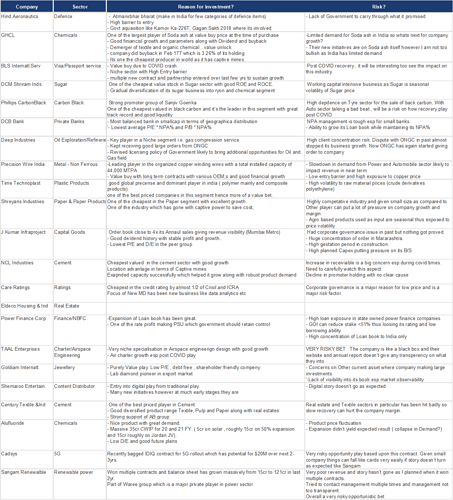 I will usually re-balance my portfolio when i feel exit price has come or Risk factor has played out .

Two stocks which are near my exit price. Waiting for maybe 10-20% more upside.

Would love to get your views and learn

One of the most impressive portfolios I have seen on this forum. Rather than going with investment tide, you have actually picked good stocks with bottoms up approach. One of the portfolios that falls into “Value Investing”. If you don’t mind, can you explain how do you go about picking companies? Like what parameters you check about companies? Also, why are you selling winners in your portfolio? Do you have exit prices in mind whenever you make purchase? or do you stay invested till companies keep performing?

thanks a lot Chaitanya for your kind words

i usually am a very conservative person so i think value investing is part of my nature. Infact my 80% of portfolio at even such good time is in debt fund and that has been the case for last 10yrs now. I invest around 20% of my investment only in Equity and those are highly value based

Hi All I was trying a way to find the cheapest stock in banks and used the below methodology. what you all think? I use an average of P/E x Gross NPA% AND P/B x Gross NPA % to find the lowest ratio along with those banks only where Capital Adequacy is >12.5% as required by Basel norms on a conservative basis** Many of you might be seeing above stock-picking methodology for first time. Reasons for this is as below Example 1: Suppose you have two stocks with a P/E of 10 and Gross NPA of 1% an…

lastly in short time i have learned so much from this forum. I hope to keep learning here and contributing to this lovely forum

Reason for still not fully exiting it

So given story still has potential , decided by keep my profit invested

Now on S P Apparels, its a pure value play like i did with GHCL,i think it will do well…

I checked Sangam Renewables.
The spelling of executive is executtive on the website: http://sangamrenew.com/our-team/. Not a good sign 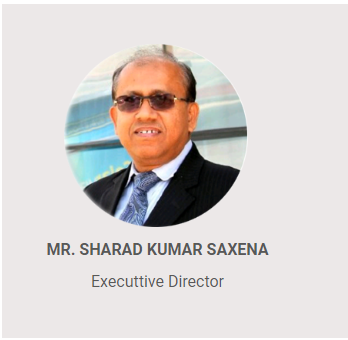 Company had 7Cr of sales in 2019 and market cap is only 16 crore rupees. Debt of the company at 37 Crores is 5 times the sales and 2.5 times the market cap. Confusing why the company has cash & eq of 7 crore (which is equal to its sales) when the debt is so high! Company is not able to service its interest also as seen by negative interest coverage ratio. Given this is 4% of your portfolio, recommend booking a loss and finding better avenues.

Renewable energy is a very capital intensive business. Not sure this firm can be a going concern in a few years time.

thanks @rkirana for your comments

Coming to Sangam, yes i am aware its a very risky play and the largest loss i have is on this company in my portfolio

I don’t think we can look at this company from the normal prism of fundamental analysis as these are opportunistic play where things slowly unfold.

My question to management has always been around why not acknowledge this backdoor entry and why did it not go public itself. However, if you closely follow this company, you will see what I mean

Thus, in short, company has raised multiple money ( waree, etc) and also made substantial investments. I have no doubt it has strong Waree group support as have been following this company for more than 3yrs now and my conviction on this company hasn’t changed

Red flag in this company is management transparency however I still think the story is yet to come out on this stock. It’s a risky play as I mentioned where I might lose 100% capital ( i usually have 10-15% of my equity in such risky bets while the remaining 80% are value-based safe stocks)

I think no company I have found in India where there is no corporate governance issue. I am aware of the promoter making wrong disclosure of their shareholding and I think the market is still punishing them after all these years however they got cleared by SEBI. Other than that, I see their actions to be fairly reasonable and also they are quite engaged in emails.

(FYI: After investing in Reliance Industries, I have stopped caring about corporate governance issues in any company till the time its really a red flag. We all know how reliance has grown and still, most of the investors have made an investment in that company including myself.)

Goldiam, yes true. this sector is a tough one to track and esp after Nirav Modi’s case, it just proves how lack of transparency has hurt this sector prospects. I still think a well-diversified portfolio should have gold.diamond stocks.

Hi - I have made 2 changes to my portfolio after doing a review of all the company’s quarterly results and COVID impacts on the company results.

(1) Sold Century textile and bough IST. Century was purchased at 285 and today I exited it at 312.
Reason for exit: Quarterly result was way worst then my expectations and the outlook of textile doesn’t seem good in next 1-2 yrs unless its a niche player in segment ( one of the reasons for entering S P Apparels)

I will post the quarterly results on each company in my portfolio by weekend however the result was too poor than my expectations in Century hence cutting it away.

(2) Goldiam International: Although company management actions are shareholder-friendly and primarily it looked like one of the best-priced company in the Jewelry segment but after going into details and studying this industry further for last 1 month now, I realized the concerns @sahil_vi highlighted regarding investments, in particular, were genuine. We reached out to management and they were satisfactory in most of their other concerns however for me the lack of transparency in their product was still something making me uncomfortable. I entered this at 114 and exited at 114.2 so not a good feeling but I have realized one thing in the last 10yr that as soon as we are not optimistic like we were at the time of investing, it’s better to switch it. My decision might prove wrong in future.

(1) Renaissance global: I found this company very similar to Goldiam however the product transparency was something that attracted me. The company has a famous Disney brand which has got good response so far
https://renaissanceglobal.com/enchanted-disney/
and also it has multiple stores in Mumbai along with a recent tie-up with china big houses which is expected to boost its revenue.

Jay Gems, a subsidiary of Renaissance Global, said on Tuesday it has signed an agreement with Lao Feng Xiang (LFX), one of the largest Chinese jewellery retailers, to launch Enchanted Disney Fine Jewellery in Mainland China.The launch into China,

will post more on this in the Renaissance forum soon. Entered @218 for 4% of my portfolio.

(2) Instead of Century, i have entered IST LTD. This is a very interesting cash-rich company with a high float. One thing which attracted me about this company is high growth with high promoter holding which is a lethal combination. Entered @236 today for 4% of my portfolio. Will post more on this in IST LTD thread.

Hi…Where is the link for IST Limited on the forum. I tried but just could not find it. Thanks!

Hi @smallcapvaluefind,
Tell us more about IST ltd. With P/E of merely 4.5, nearly 500cr worth of investment, promoter holding 75% and operating margin close to 70% !!! for an auto ancillary company looks too good to be true.

Hi…Where is the link for IST Limited on the forum. I tried but just could not find it. Thanks!

IST has a wonderful RE asset which churns out about 75 cr per year after tax !!
Investments etc are just the result of this cash flow…

I had invested in Renaissance Global during the March crash after tracking the co for nearly a year…
Seems like we’ve found a 100x here.

What is the advantage of buying stake in the company where largest equity holder not willing to share any penny?

They are cash rich but don’t want to share wealth generated via Dividend or Buyback.

I hope you’re referring to Renaissance.

Unfortunately more than 66% of Indian companies will fail on this test.That is the paradox!!

No Gaurav, It was for IST.