I see Genus Power being mentioned in many peoples PF, but there is no dedicated thread on this company. I started looking into this company 2 months back and below is the summary of my findings… I am new to this and request seniors to provide their inputs.

Genus Power is a leading player in the domestic electric metering market. It was incorporated in 1992 for manufacturing PCB Assemblies. Production of tamper-proof meters started in 1996 and since then, the company has installed more than 60 million meters. 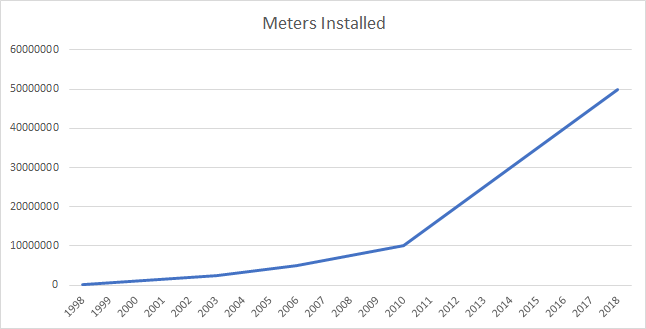 The company gets it’s revenues only from domestic market. 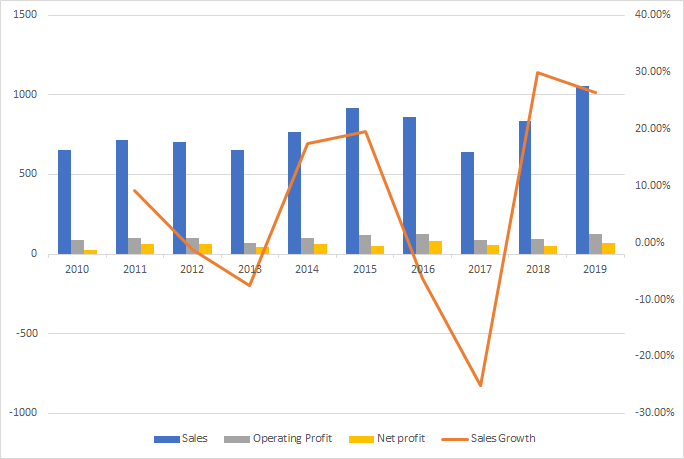 There are 3 years when the revenue growth was negative

OPM and NPM has been steady during all this period. 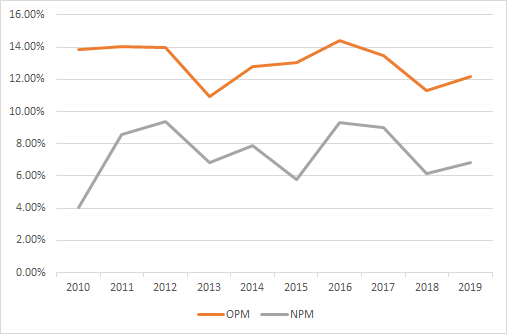 I was not able to find breakup between the two divisions in the annual reports. So revenue, margin breakup is not available

Market position: Genus is fairly well known and large player in a very competitive market. Competitors include companies like L&T, ITI, Keonics, JnJ.
EESL is currently handling the deployment of Smart Meters (About Smart Meters). The contracts are awarded through tendering process. Often larger infra companies like L&T participate. However, the actual supply of meters get further sub-contracted and end up with companies like Genus. Having all the necessary certifications helps Genus.
Examples

Imports, especially Chinese imports, are a constant threat as mentioned by Jitendra Agarwal of Genus Power in this interview - “Chinese imports have led to closure of many businesses”. However, in the last earnings call, he clarifies that no Chinese company has bagged a EESL tender

image1764×679 54.7 KB
However, this seems to be a constant threat.
Margins and Pricing: Being fixed price contracts, pricing is important during the bidding process. Raw material availability and cost form a big portion of the costs. The OPM and NPM has been steady (as shown above) at 12% and 6% respectively. The last two quarters has seen a sudden jump in these two to 15% and 8.5%. The conference call has some pointers on this improvement 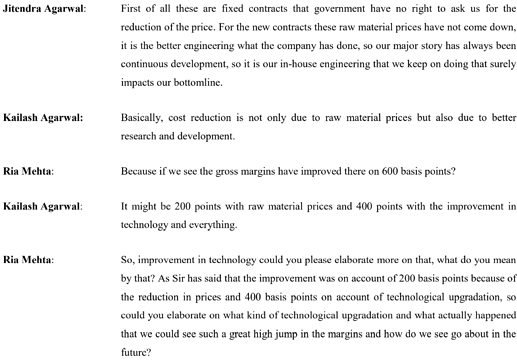 Receivables: The receivable days is high for obvious reasons. It’s consistently around 6 months. CCC too is similarly high

Debt Levels: Debt to Equity has been reducing consistently over the years

Related Party Transactions: The company had a Joint Venture in Brazil Genus SA, Brazil. This was divested in FY 2016. There was another subsidiary Genus Paper and Boards which was transferred to Genus Shareholders Trust. However there two associate companies and a few companies where Key Management Personnel are in position of influence. The concerning issue is that Genus Power has extended unsecured loans and guarantees to these unlisted companies. There are also transactions with these companies and KMP

Pledge
Another concern is that the promoters have pledged shares starting Dec 2017. The pledge is creeping up steadily

There is no doubt that the Smart Meter market is going to grow at a decent clip in the coming years. Department of Science and Technology’s report on Smart Grids clearly details the future direction. The section on Smart Metering mentions a CAGR of 8~10% in the next 4~5 years.

There is intense competition but Genus seems to be well placed to ride the Smart Meter wave over the next three years. It has the required R&D infra to handle the technological shifts. The management is confident of maintaining margins going forward. Looking at history, Genus seems to have managed the Receivables and CCC well.

The related party transactions and pledged shares is one of the major concerns. The market seems to have factored this into the 5-year low PE of 6.59. With two good quarters and improving margins, if the company can build on the momentum, we should see some improvement in market valuation.

Disc: Started tracking a couple of months back. Invested less than 5% of PF as a tracking amount.

Nice analysis. Agreed Genus continues to grow the order book resulting in higher revenues while the margins keep improving. But the corporate governance is the main issue for Genus. In addition to RPTs, Genus was also levied a big penalty for excise violation a year back.

Summary of the Q3 earnings call transcript.
(I have tried my best to quote the management and not restate their replies)

Management summary of the results 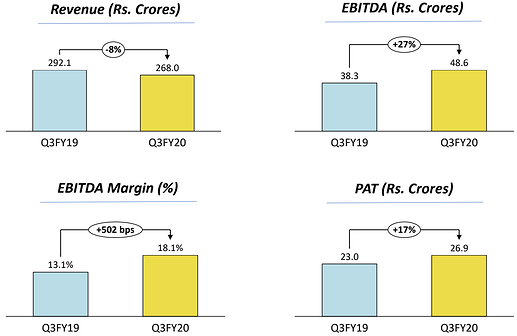 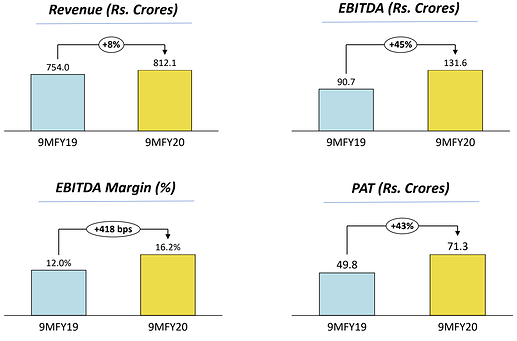 Summary of the Q4 and FY20 earnings call transcript 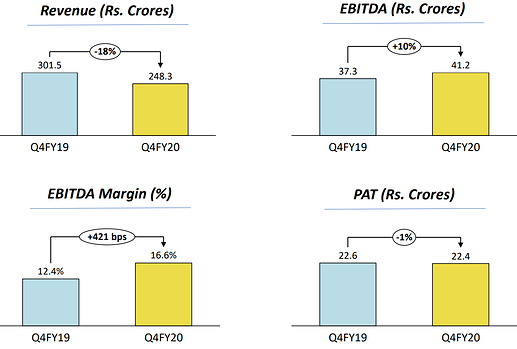 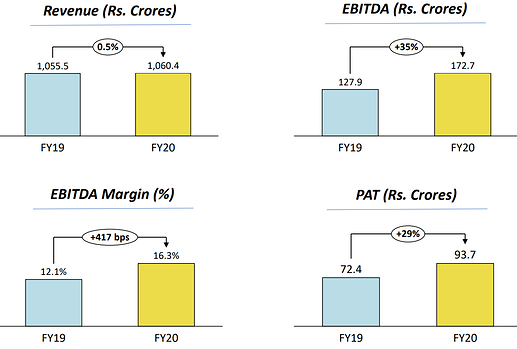 As per the report, RIL is planning to offer these services through Narrow Band-Internet of Thing (NB-IoT). Jio had in 2018 launched its pan-India NB-I..

As per the second report, Jio is interested in leveraging its pan-India NB-IoT network. In fact, Genus had started trials of NB-IoT with Vodafone earlier 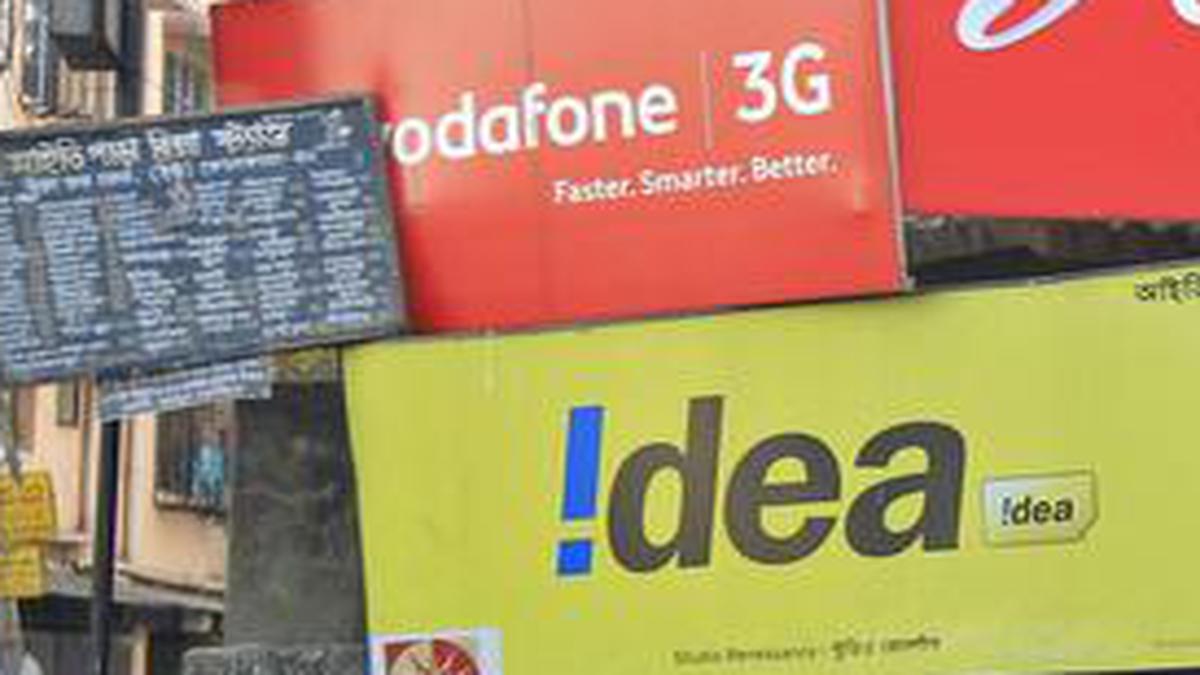 Disc: Invested (< 5% of portfolio). Above information is not an recommendation.

Towards the end of June, The government had approved the Rs. 3 Lakh Crore Reforms Based Result-Linked Power Distribution Sector Scheme. (Cabinet approves ₹3.03 trillion power discom reform scheme). The Earnings Call for Q1/FY22 was all about this scheme and it’s impact on Genus…

The summary below has the details provided by the Management. I found the call very informative and took away two important developments

My only concern is the high risk associated of doing business with the central / state governments And it’s effect on the working capital days going forward .

The positive is that the government knows that this is the only solution going forward to reduce discoms losses.

Thus we anticipate robust order inflows starting from January 2022 onwards. We expect sizable order book by the end of March 2022

Investor Release
Jaipur – 15th December 2021
Genus Power Infrastructures Ltd, today announced that it has received ~Rs. 325cr worth of orders. These orders are across Exports geography and Domestic geography. Within Domestic Geography, orders have been received for Smart Meters across multiple State Electricity boards and Gas Meters. These orders will be executed over next 12 months. With these orders, the company has crossed Rs. 1,000cr orderbook

Thanks @lsubs for regular updates on the thread and excellent notes, and @Tar for superb article on structural reforms being carried out in sector.

The one sector on the cusp of regulatory transformation

Exploring opportunities arising out of the Electricity Amendment Bill of 2021

India wants to do 10 Cr meter by 2023 out of planned 25 cr, 1.5Lac cr has been budgeted for metering out of 3Lac cr overall budget overlay( more details in AR 21 and reform article above), opportunity size is clearly huge and so is sense of urgency/policy push from Govt.

Being invested in sector via Borosilrenwable( alongside IEX and Tata power), which has given very good returns driven by multiple QoQ improvement in performance over last many quarters as well as multfold upcoming capacities. Wanted to check possibilities in smart meter push.

IDEA is not direct comparison but wanted to see if something meaningful can play out here for Genus, some stark differences stand out in business model

Path forward for Genus
Now that Corona situations had adverse impact in FY21 and H1 22, Genus is guiding for a better H2 22 and solid FY23 on back of -

Valuations- company has guided for 1300 cr revenue and 16-17% margins in FY 23( per them conservative), at current valuations available at 1.1X sales and 6X EBDITA for FY 23. FY20 they have done 1100 cr revenue and 100+ cr EBDITA so numbers look doable. A visible growth and sunrise sector can good valuations, as soon as one good qtrly performance is delivered- rerating likely to happen One learning though is to scale position only based on performance, not based on hopes given history of company

Genus has a installed capacities of 1cr meters, can double in 6 months with brownfield approach, as of day has 1000 cr order book from 4000 cr+ tenders participated, out of another visible 6000 cr tender in Q4 , they can win another 2000 cr given past history).

Genus Power - Smart Metering Untested - but worth a good look

Do we have any information if Genus power has interests in entering the EV charging meter business ?

Recently started studying the power sector and related areas - renewables, EV charging landscape, CNG, discom reforms and Electricity Amendment Bill - as @Tar mentions in his blog, this sector is definitely ripe for policy driven disruption. Secular trends which I can spot are :

Power generation : Increase of renewables primarily solar
Power transmission and distribution : Increase in smart meter adoption, increase in share of private players in discom business
Energy consumption - Increase in CNG/LPG in transport/industrials/home fuel and adoption of EVs in auto industry (Led by 2W/3W and followed by PVs, CVs are laggards)

) - is a soundly thought one scheme which is a win-win for discoms, end consumers and power generators. Resistance from State Govts is low as the scheme has been worked out with two things in mind - 1. Incentives which are linked to discom performance and 2. Opex component where discoms can pay for new infra (smart meters) in a rental model rather than all upfront. The financing mechanism seems to be be in place (Supplier receivables are sovereign guaranteed, therefore bank appetite for loans to private players will increase).

In the context of RBRLPDSS taking off from FY23 (After delays due to Covid), I have tried to project the opportunity that Genus Power presents to investors in the next 3-5 year horizon.

Note 1: Genus’s present tender win rate is 30%, I have assumed 20% and 15% respectively for Phase I and Phase II as a conservative estimate and also because going beyond that scale may put tremendous pressure on company’s balance sheet.

Note 2: AMISP stands for Advanced Metering Infrastructure Service provider - Essentially a company responsible for investing in buying/manufacturing smart meters and deploying them and associated software stack for discoms and thereafter providing maintenance services for the meters and the software stack. 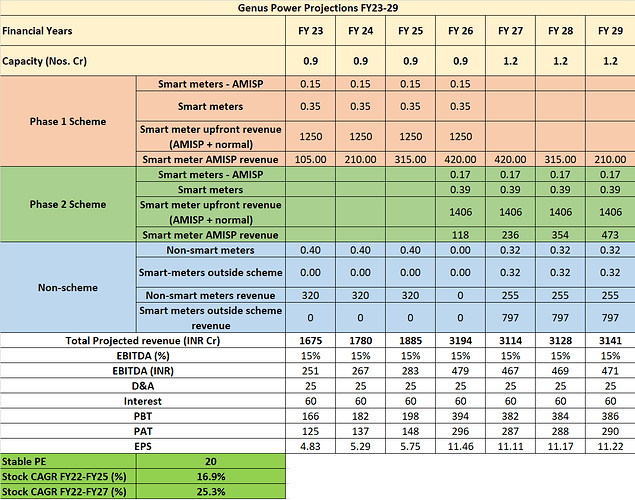 Given these assumptions, company EPS is projected to grow to INR 11.5/share by the end of FY26. I think growth in this company will be lumpy due to the scheme phases with one leg of growth coming in FY23 and the 2nd leg coming in FY26. Projected stock price CAGRs as per the model are 17% for FY22-25 and 25% for FY22-27.

Phew! That was a long first post. Feedback and corrections welcome

In addition to all the excellent points that you mention, there is an added optionality of Gas Metering too…

Disc: Invested. Views may be biased

Since you are trying to include analysis for long term, always look into board of company. Last year, they added two folks :

This gives you confidence that company is improving its management .