Exports play an important role in the country’s economic growth and India is no exception. If we look back at the data exports as a contribution to country GDP has grown rapidly during the period 2002-03 to 2008-09.

Those were the best years for Indian stock market to lead by exponential earnings growth for Indian companies. In general exports revenue has better margins also. From 2009-10 exports as % of GDP was almost plateaued and in declining trend. Subsequently even the corporate profit as a percentage of GDP has reduced. 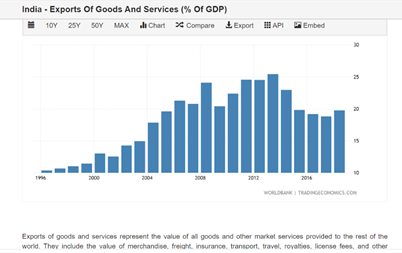 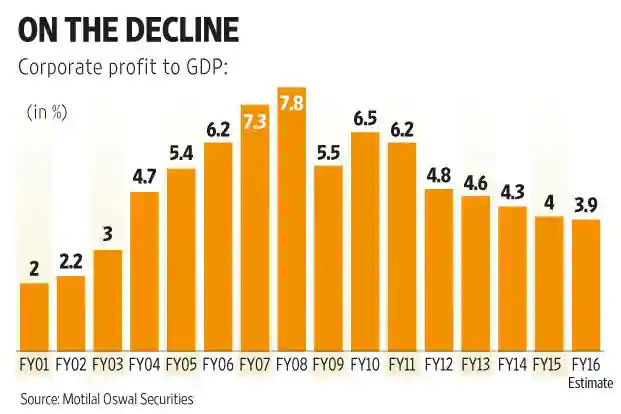 During the last few years Indian chemical industry is getting benefited as global companies are shifting their sourcing from China mainly due to environmental issues. Ongoing Covid crisis and visible sentiment against China may further accelerate the shift in global outsourcing to other industries as well.
During the latest con-calls many companies across the sectors gave an optimistic view on export opportunities from Europe/US clients as they want to avoid China as a single source.

Other changes happened during the last few quarters as GOI reduced the corporate tax and offered various incentives for companies to set up manufacturing factories in India to become alternative source for global outsourcing.

Does the export pick up really happen on ground or not is to be backed up by data. Govt of India releases export import data of major commodities on 15th of every month (service sector data for previous month) along with macro view on total import, export, trade balance which is a reliable and practical way to track.

Using export import data we can substantiate some of the changes investors think as fundamental change happening in particular sectors/companies and build our conviction in what we track/invest. Exports have become more important in the present scenario of domestic slowdown due to Covid.
Also possible is first look at the data and if there is significant change (either positive or negative) in the trend of a particular sector, we can follow it up further to assess what has changed fundamentally, so that investment decision becomes easier.

Whole Idea is to identify the trend on what we think is changing fundamentally and substantiate it by nos. (Not to focus too much on macro data but to get limited and information for the investment purpose) 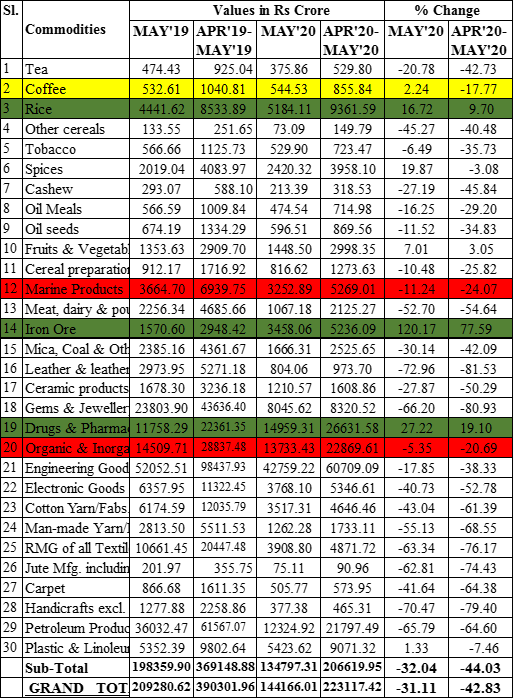 As expected most commodities have shown significant degrowth during the month of May-20 compared to May -19.

Coffee exports have shown slight uptick of 2% MoM but down by -17% for corresponding months of FY (April to May) ( related CCL products which gets majority of revenue from exports, may be even for Tata coffee ltd?)

Rice exports have positive growth of 16% MoM and 9% for the corresponding months (April to May) of FY ( important data for KRBL, LT foods and Chamanlal exports)

Drugs and pharmaceuticals have registered growth of +27% MoM and +19% for corresponding months of FY (April to May) as anticipated.

Surprisingly Iron ore exports have shown a big jump of more than 100% MoM and +77% for FY.( Need to check what is changing here and which companies to benefit) 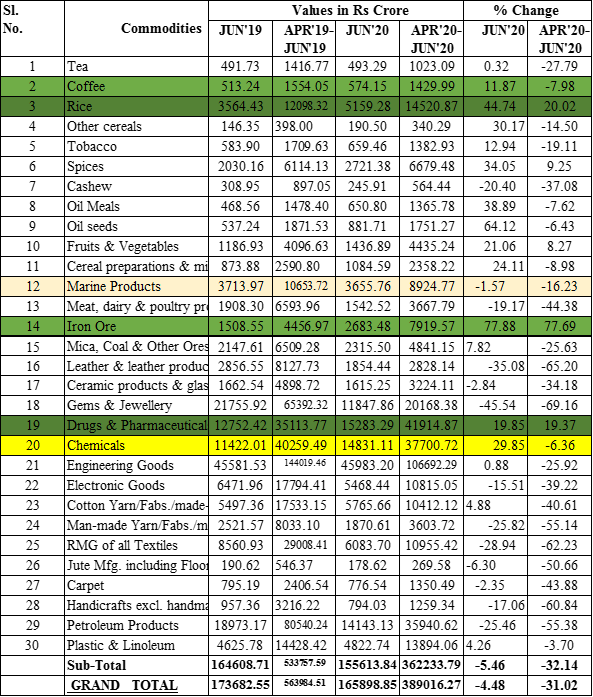 Rice exports also increased further with growth of +44% for MoM and increased by 20% for FY till June.

Pharma export continues good run with growth of 19% for MoM and till June of Fy20.

Iron ore exports have grown by 77% for the MoM and for FY (someone tracking the sector may share more insights on this. Godawari ispat and power ltd does iron ore exports as mentioned by vp member during offline discussion)

Export of chemicals are back in action after degrowth during the previous month. Impressive 30% growth for the month (down by -6% for Fy)

Many commodities like tobacco, spices, Oil seeds, cereals, fruits have grown positively compared to degrowth of the previous month.

Overall trade balance was turned positive for the first time for India during the last decade.
Both import and export in absolute terms remains low.

Few points:
Data link of commodities exports for April-20 is not available.
There may be pent up in some of the exports like pharma during the month of May due to lockdown during the previous month.
Data will be more curated and presented as we learn further
Revenue is presented in Rs Crore. Follow the above links for further detail in dollar terms and import data also.
Going ahead we will try to get more insights on import statistics also which help in noticing certain changes in particular industries. (Eg: Coffee industry imports and it will be exported after processing)
More granular data will be available based on HSN code of particular material which is published by GOI with delay of 1-2 months. 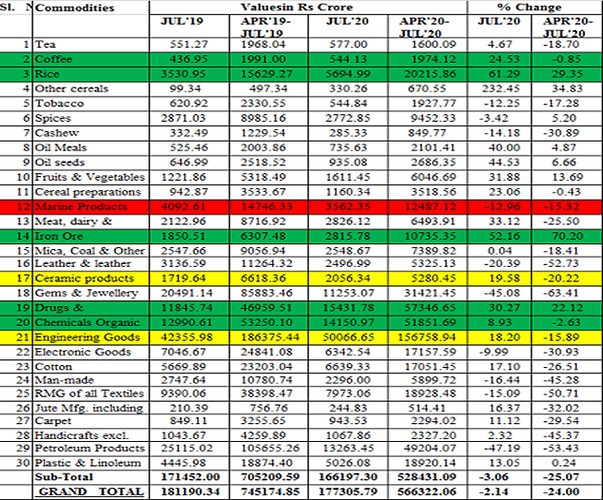 image635×526 289 KB
Coffee exports continued to grow further showing impressive growth of 24% for July MoM (flat growth till July month of current FY). coffee prices were lowest in 2019 in the last ten years and seems to be recovering slowly.

Rice exports grew substantailly +61%% for MoM and increased by 29% for FY till July.

Engineering goods have grown 18% after de-growth in the last two months. 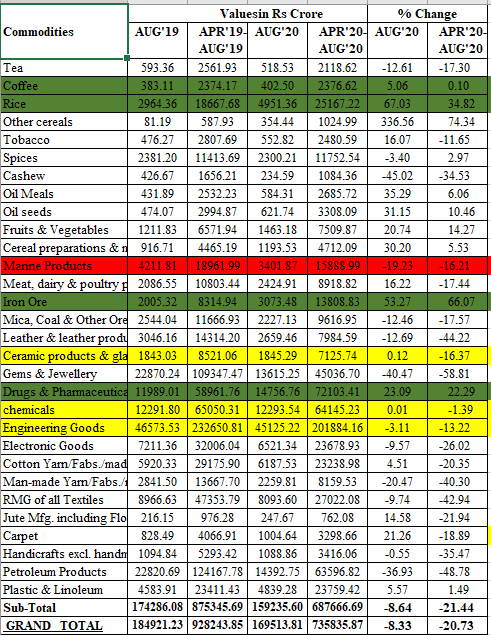 Rice exports continue to grow substantailly +67%% for MoM and increased by 35% for FY till August.

Overall export registered negative growth of -8%( In Rs terms) for the month of August -20 compared to Aug-19.

Early data on agri commodities export for the period of April-Sept 2020:
(Complete details of exports for the September month is yet to announced)
Essential agri commodities for April-sept 2020 has increased by 43%.
Major commodities showing positive export growth in Q2:
Groundnut: +35%
Refined sugar:+104%
Wheat :+206%
Basmati rice: +13%
Non basmati rice:+105%
Trade balance for Q2 is positive at Rs.9002 cr vs deficit of Rs.2133Cr during Q2FY19
(Relatively lesser export growth in basmati rice is probably due to payment issue with Iran) 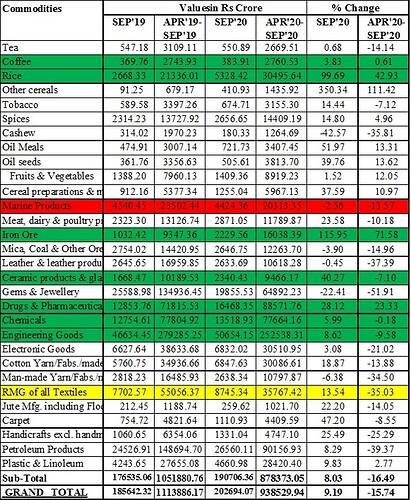 Coffee exports continue to grow at a low pace of 3.8% MoM and almost flat for the 6M of FY.

Chemicals exports better than the previous month and grew at 6% for MoM and flat for H1FY20.
Eng goods, ceramic products have shown positive growth.

Finally it seems to turn around in the textile sector with RMG of textiles, cotton yarn…etc started showing positive growth. 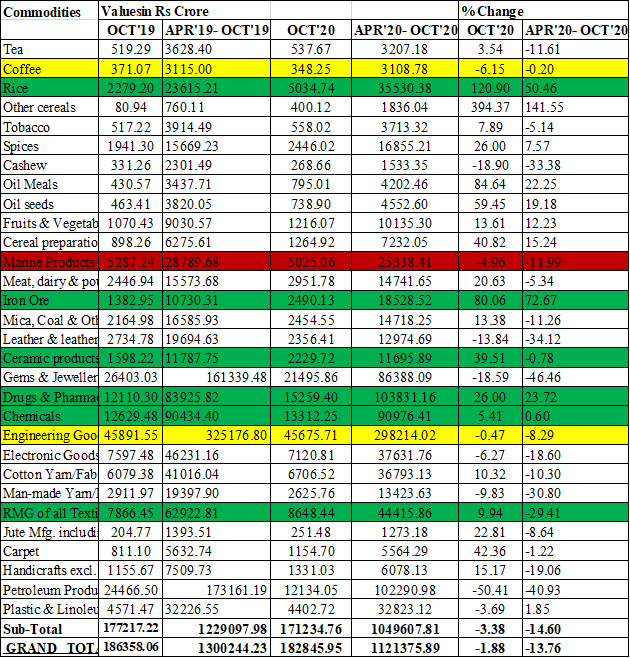 Rice exports remains strong,growth of 120% MoM and increased by 50% for till Oct20. 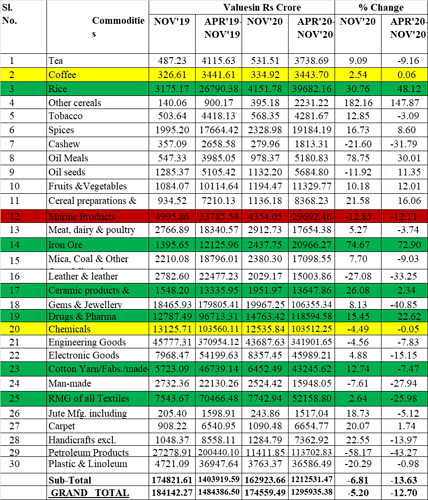 Coffee exports marginal growth of (2.5%) compared to negative growth in previous month and remains flat for the year till Nov202

Marine product exports continue to de-grew (-12.8%) MoM and the trend remains the same for the last few months.

Iron ore exports up by 74% MoM and 73% till April-Nov20.( Iron ore prices at multi year high last seen in 2013 https://tradingeconomics.com/commodity/iron-ore)

Ceramic products exports are increasing from the last 2 months.

Pharma exports remain positive with growth of 15% MoM and 22% till Nov20. (some moderation in growth compared to last few months growth of more than 20-25%)

RMG of textiles has shown some moderation in growth (2.6%) for Nov month. 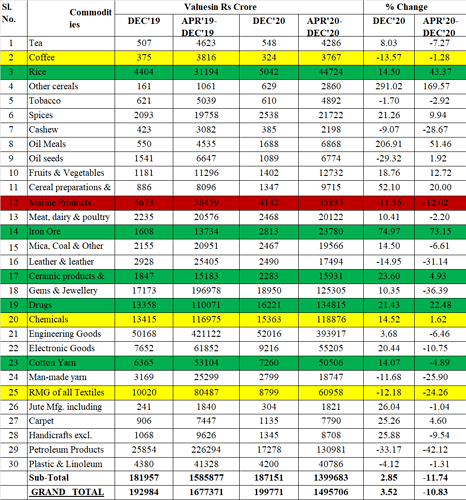 Rice exports at growth of 14.5% for Dec month and by 43% for period April-Dec 20.( some moderation in growth after growing at more than 50% during last few months).

Marine product exports continue to de-grew (-12.8%) and the trend remains the same for the last few months.

Ceramic products exports are grown at 23% for Dec and last 3 months of positive growth.

Pharma exports showed good growth of 21% for Dec-20 and 22% for April-Dec20.
Chemicals exports back to growth by registering +14% for Dec and flat for period April- Dec 20 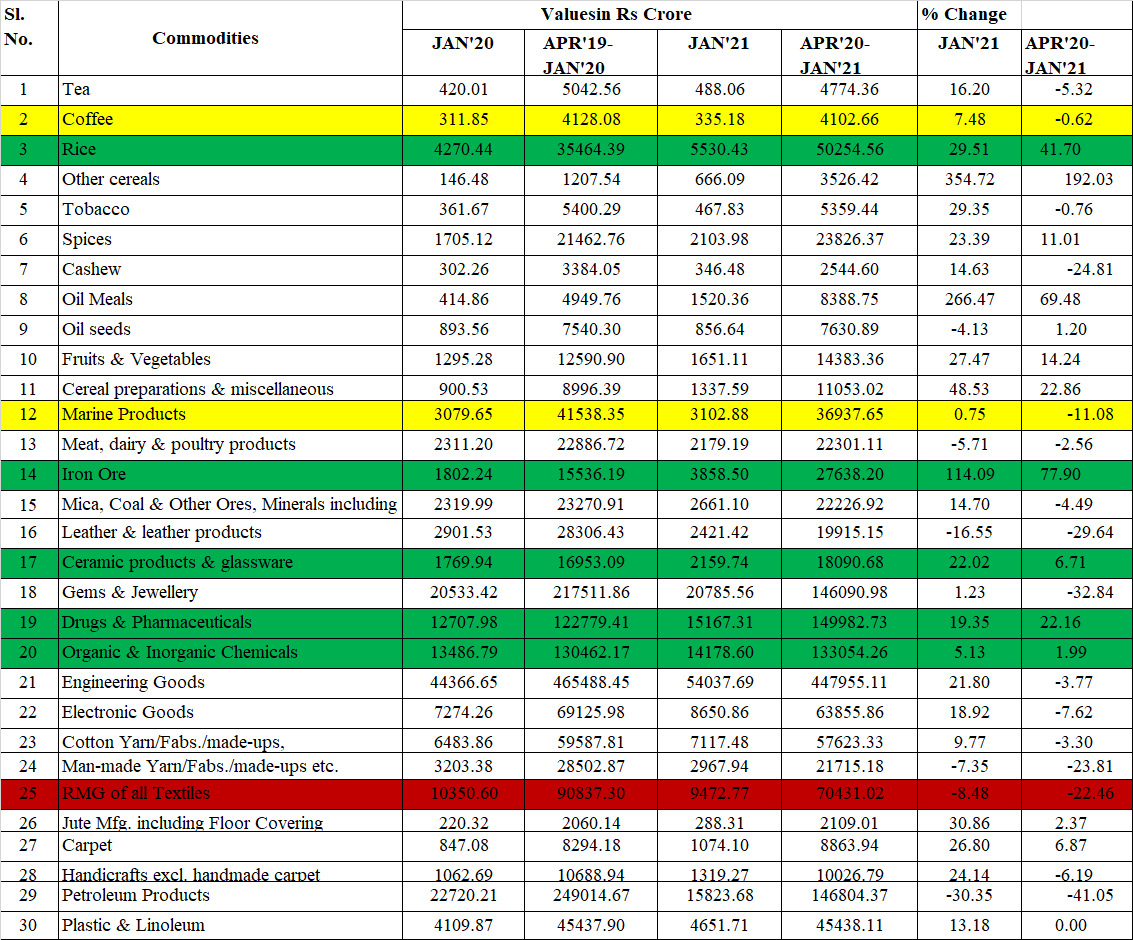 Coffee exports grew by 7%( previous 3 months of negative/flat growth) compared to Jan-20 month and -5% for the period April to Jan-21.

Chemicals exports at moderate growth of 5% for Jan and 2% for the period April- Jan-21. 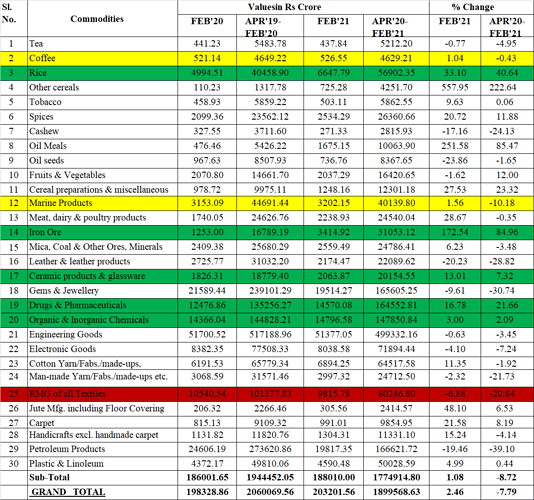 Coffee exports remained flat for the month of February and for the period April20 to Feb 21.

Marine product exports have remained flat from the last 2 months.
Iron ore exports grow by whooping 172% during Feb-21 and 85% for the period April to Jan-21.

Chemicals growth remains subdued at 3% for February and 2% for the period April to Feb-21. 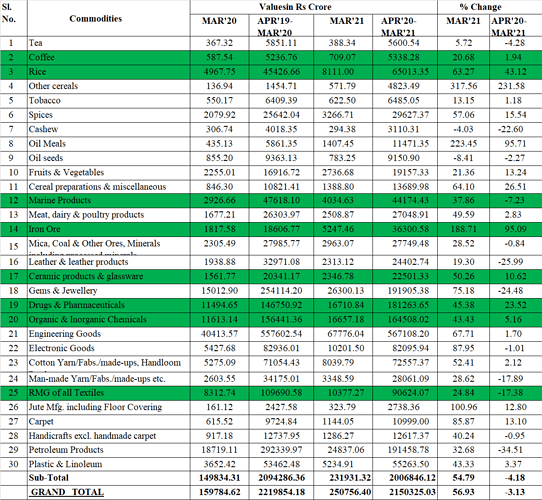 Coffee exports had growth of 20% yoy for the month of March but overall growth for the period April20 to March21 remained flat at 2%.

Rice exports continue to grow like previous months with growth of at 63% for March-21 month and up by 43% for FY.

Marine product exports for March month at 37%(compared to flat no during previous months) and de-growth of -7% for the whole FY.

Chemicals growth had positive growth of 43% during March and 5% for the period April to March-21.

RMG of textiles exports grown at 24% for March and negative growth of 17% for April to March21.

(Considering April 20 had full impact of lockdown during last year, I have included April 19 data to compare with April 21 rather than comparing with low base of April 20) 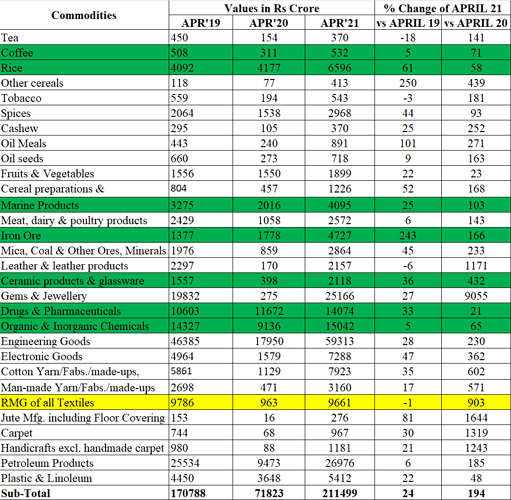 Marine product exports had growth of 25% compared to April 19 and more than 100% against April 20.

Ceramic products and glassware had growth of 36% vs April 19.

Pharma exports remained consistently positive at 33% and 21% against April19 and April 21 respectively.

RMG of textiles had negative growth of -1% compared to April 19.

May 2021 merchandise export date update(In Rs Cr).
(added May 19 data also considering impact of national lockdown on exports during May-20. Even though various states have imposed lockdown during May 21 due to second wave of covid, it was not as severe as first lockdown) 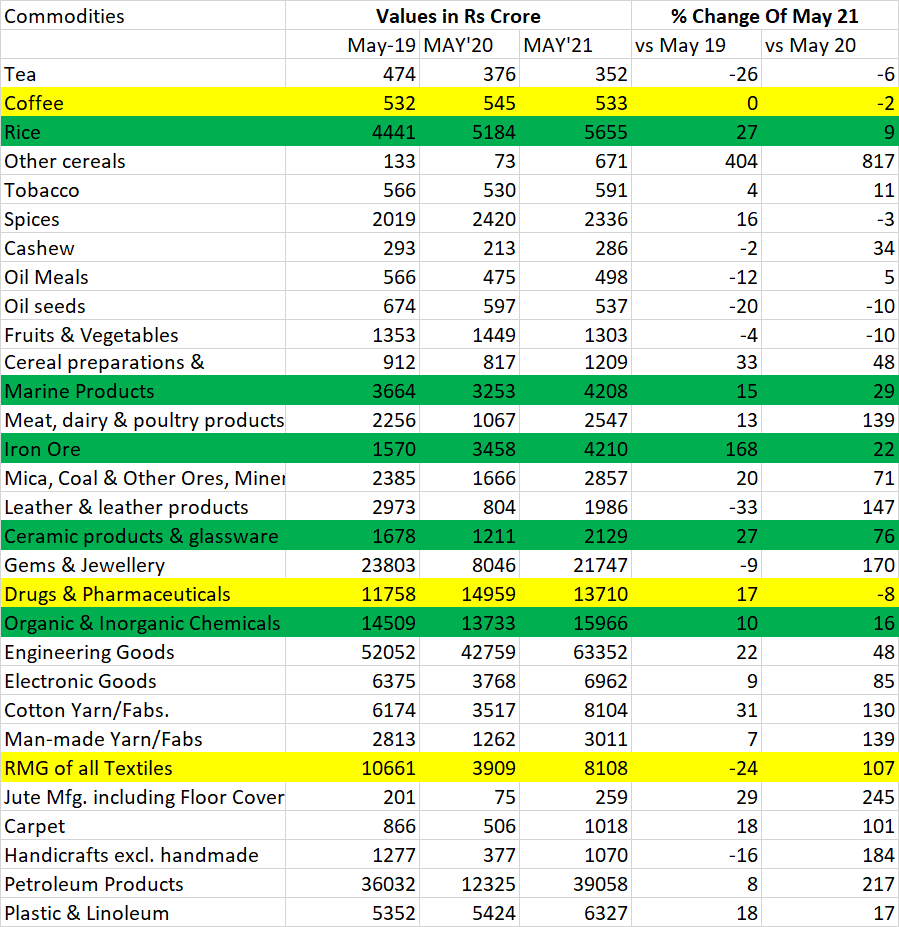 Coffee exports were flat against May19.

Marine product exports grew at 15% and 29% compared to May19 and May 20 respectively.

Ceramic products and glassware had growth of 27% against May19 and 76% vs last May.

RMG of textiles had negative growth of -24% compared to May19. 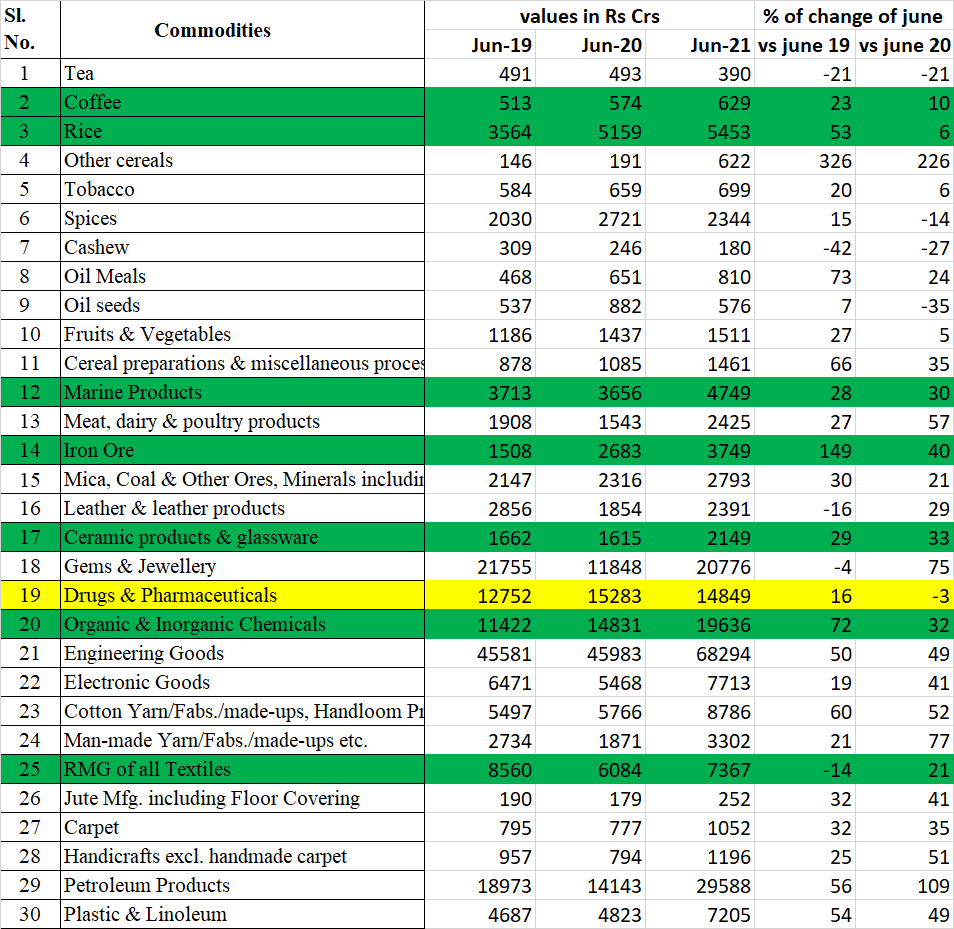 Coffee exports are higher by 10% yoy and 23% compared to june-19.( coffee prices are in upward trend due to low production in Brazil. Trend of international coffee prices can tracked using the link International Coffee Organization - Daily Coffee Prices)

Rice exports remain positive but the growth rate has been reduced from the last two months compared to previous quarters.

Ceramic products and glassware exports continue to grow at 29% and 33% compared to the same month of last two years.

Chemicals exports growth is getting better with +72% compared to june19 and 32% vs june20. 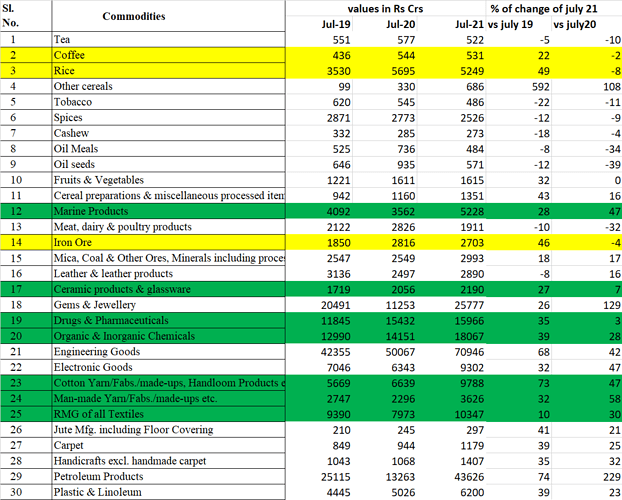 India’s overall exports(merchandise and services combined) in July 2021estimated at USD 54.95Billion showing positive growth of 36% and 23% over July20 and july19 respectively.

Coffee exports are higher by 22% compared to July19 and marginally down by -2% vs july20.

Pharma exports marginal growth of 3% against July20 and 35% compared to july19.

Chemicals exports growth of 39% and 28% compared to july19 and july20 respectively. 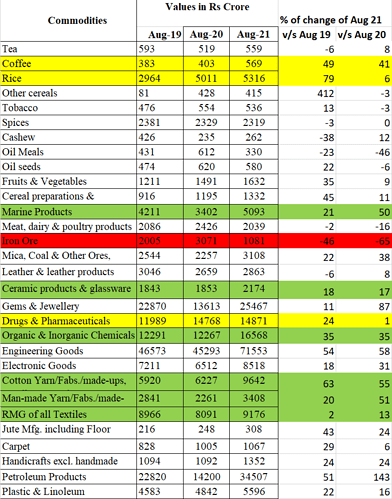 India’s overall exports(merchandise and services combined) for Aug 2021estimated at USD 52.2 Billion showing positive growth of 34% and 16% over Aug 20 and Aug19 respectively.

Rice exports increased marginally by 6% compared to Aug 20.(on a high base )

Marine product exports continue to have good export growth of 20% compared to Aug19 and 50% vs Aug 20.

Chemicals exports growth of 35% compared to the same month of last two years.