Elecon Engineering Limited (EEL) is one of Indiaâs largest manufacturer of Material Handling Equipments (MHE) and Industrial Gears and Power Transmission products. MHE systems primarily comprise of various conveyor systems. EEL is one of the largest manufacturers of industrial gears and was the first company in India to introduce modular design concept, case hardened and ground gear technology. EEL is the gear supplier of choice to core sectors like Sugar, Cement, Steel, Fertilizer, Plastic Extrusion and Rubber. They are the only manufacturers of Vertical Roller Mill Gear for the power and cement industry.

Turn around in capex cycle has meant that the order inflow has stabilized. EEC has acquired the Benzler-Radicon business from the David Brown Gear Systems Group for a consideration of ~132cr. The company proposes to fund 80% of the acquisition through debt. That means an additional debt burden of 105 cr. This acquisition provides EEL with access to European markets.

Debt-Equity Ratio is likely to go up after the acquisition. Increased debt of 105cr would mean an additional interest outgo of around 10-12 cr.

Political instability may reduce the pace of infrastructure development and may harm the growth for the company.

Input cost of steel is important for margins and any sudden and large increase in prices may impact margins.

I would not be surprised if I see atleast a 50% price appreciation in one year. The downside risk seems to be limited to 10%-15%

Actual performance will pick up once the upstream sectors where their gears are used actually pick up - sectors like sugar, cement. Till then the stock will languish. Need to keep an eye out for the company as they will benefit from the revival in the infra spending.

Call addr by Mr. Prayasvin Patel CMD & Mr. Rajat Jain CFO. Highlights-Capital Mkt
Company bagged orders worth Rs 140 crore in June’15 quarter in Gears division domestically, and total order book position as on June’15 stood at Rs 260 crore as compared to Rs 285 crore in June’14.As per the management, while there are lots of enquiries going on, yet the conversion of those enquiries into concrete orders is taking time. Further, there are delays and deferments happening in existing orders. As per the management while it will take another around 6 months time for things to improve, concrete action needs to be taken by the Government and management is hopeful of the same.
Of the total consolidated revenue of around Rs 257 crore, about Rs 97 crore is from Indian Gear business, Rs 89 crore from Material Handling Business (MHE), about Rs 71 crore from International Gear business. At Ebidta level, Indian Gear business reported around Rs 22 crore of Ebidta, International gear around Rs 7 crore, while there was a loss at MHE division.MHE division sales were lower by about 14% to Rs 89 crore YoY and the segment reported a loss of about Rs 8.5 crore at PAT level. Lower execution is predominant reason of losses. Going forward management expects things to improve in next couple of quarters; however it’s difficult to give any timeline for the segment.
As per the management, there are not much tenders floating around for mining activities. Both public and private sector are taking time and delays are seen. There is no concrete action happening at the ground level at the current juncture for mining sector.MHE has an order book of around Rs 1100 crore as on June’15. The company expects another Rs 1000 crore of orders to come in, provided some tendering and business activity starts.As per the management, already activities have started at underground mining activity, where Eimco Elecon is present. Some orders for Tunneling, which is a pre requisite for mining activity, especially from private players who had won the coal auctions, is already received by Eimco Elecon. Gradually orders for conveyors, components, gear boxes etc should start in next 6 months if the mining activity picks up.
The international gear business has turned around in June’15 quarter. The strategy of the management to transfer all the manufacturing process to India and then subsequently to export to these countries and to use the subsidiary more from marketing and after sales and service business, has started yielding results for the company. Management expects the subsidiary to continue to do well. It has an order book of around Rs 150 crore as on June’15.The consolidated debt as on June’15 is around Rs 500 crore.For FY’16 management expects consolidated net sales to grow by around 10%. However all depends upon how the dispatch and delivery and execution of orders happen during the year.

Call addr by Mr. Prayasvin Patel CMD & Mr. Rajat Jain CFO.Highlights-Capital Mkt
Co bagged orders worth Rs 112 crore in Sep’15 quarter in Gears division domestically as compared to Rs 107 crore of orders in Sep’14 quarter, and total order book position as on Sep’15 stood at Rs 258 crore as compared to Rs 275 crore in Sep’14.The company continues to remain cautious on order intake and was very selective. Given the order backlog, outlook remains robust for execution in coming quarters.Management continues to remain optimistic for orders and its execution in H2 FY’16. As per the management, the open cast mining would see more inflow of orders in next 9 months time frame. Upsurge will happen in order inflow in H2 FY’16.Defense, sugar and fertilizer sector are showing good traction and good orders are expected in H2 FY’16.Ebdita margins at consolidated level was around 13% in Sep’15 quarter largely due to improvement in international gear business and domestic gear business and increase in sales of spare parts together with tight costs control initiatives.
Elecon EPC or the MHE business sales stood at around Rs 101 crore in Sep’15 quarter with a loss of about Rs 12 crore and international gear business reported sales of Rs 74 crore for Sep’15 quarter with PAT of Rs 1 crore.Elecon EPC business has an order book of around Rs 1000 crore and international gear business has orders of around Rs 60 crore as on Sep’15.
Overseas entity Ebidta is expected to remain around 7% going forward for rest of FY’16.
Overall, management expects around 10% growth in consolidated net sales and Ebidta margins of around 12-13% for FY’16.Debt at consolidated level as on Sep’16 stood at around Rs 632 crore.The company is operating at 45% of capacity for gear business and there are not much capex planned for next 12 months.As per the management, so far not much benefit of lower steel prices was visible to the company as the company always booked the raw material on back to back basis.Around Rs 275 crore is the retention money lying with customers for more than 1 year now. Management expects Rs 60 crore of recovery before Mar’16.

Elecon Engineering Company held its conference call after it declared its results for the quarter ended December 2015.
Prayasvin B Patel, Chairman & Managing Director and CFO Rajat Jain addressed the call.

Highlights of the call:

At the standalone level the company had a challenging quarter from a margin standpoint. Its EBITDA levels came down on account of unfavorable revenue mix involving bulk of the shipments of low margins.

`Its end customers continue to grapple with execution challenges and the environment remains challenging in the medium to short term.

From an order book perspective, the company booked Rs 121 crore worth of orders, however it continues to see lackluster demand from the key sectors such as Cement & Steel.

At the PAT level, profits were boosted by gains from sale of surplus land.

Its consolidated topline grew 17% quarter on quarter essentially on account of performance in EPC and overseas business.

The EPC business, however, remains sluggish owing to macro factors which the management believes would be taken care of by the government’s ongoing measures across sectors.

The company is seeing traction in some sectors especially defense.

The management hopes that its business would sooner than later reap the benefits of economic upturn.

The management is upbeat on the long term business outlook of the company.

Given the current global economic scenario, the management understands that the government has a very hard task at hand.

After sales business in overall sales fell in quarter thus the company had to take hit on margins.

Segments that will drive revenues for FY 2017 would be defence and marine business. This is where the company expects more orders in the future. Also the sugar sector and partially cement sector is promising.

In sugar business exports would be driving sales in FY 2017. Cement industry per se is not doing good but there are requirement coming for modification and minor enhancements which will drive growth as this is coming frequently for different plants.

In material handling business the company is focusing on those orders which have good margins.

EPC will see topline growth in this year and next year too but can not quantify.

In fourth quarter after sales should recover and the company expects it to contribute to 25% of total sales in FY 2017 from 20% last year.

The key for growth, however, would be the uptick of demand in key industries like power, mining, sugar and other infrastructure sectors that directly have a bearing on the company’s growth prospects.

All the necessary capital expenditure required for expansion has been done and hence it sees no need for additional capex in the foreseeable future other than the maintenance capex which is not substantial.

Land sold was surplus land which Elecon owned. It was under long term lease by Madhuban resort. Total realization was Rs 25 crore out of which 21.6 crore was capital gains. This land / resort was of no use to the company.

Loss of the EPC business during the current quarter was Rs 19.5 crore.

In FY 2016 EPC will not be able to make profit but the management will try to get it at breakeven levels.

Q4 will be definitely be profitable quarter. For this business the higher the turn over the better the profits.

Focus will be on products business

Key takeaways of the call

Discl: i am not invested in this stock as of now.

Hi Mehnazfatima ji,
Any further views on the technicals of Elecon?

Looks like the initial move of elecon has begun… Could you share the chart with your indicators please? 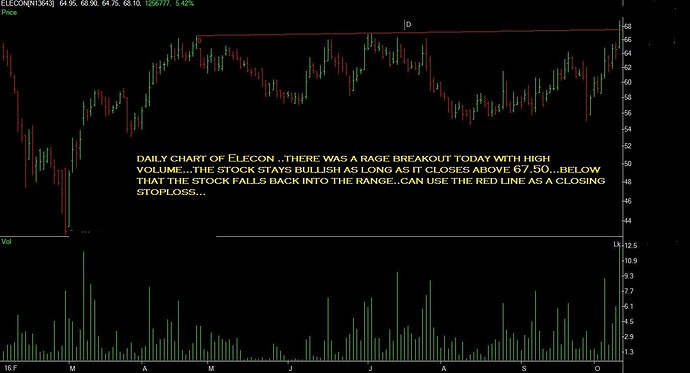 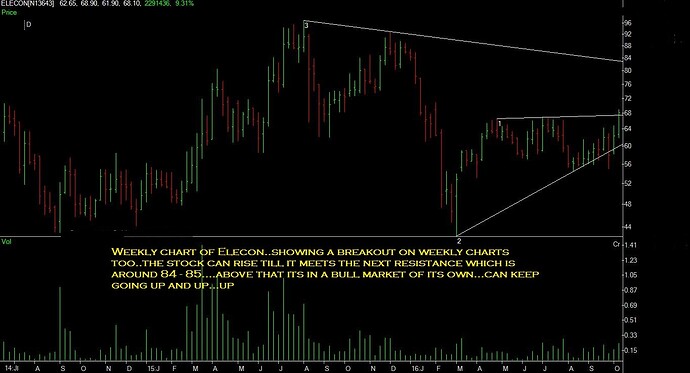 My impression is that this is just the begining…once the rally gathers momentum, the stock can keep going up and up for quite sime time…a slow and steady kind of upmove.

Since there appears to be a turnaround on monthly charts too…and a pickup in demand for equipment makers…Elecon can be held as a long term investment …for next 1-2 years…or maybe even longer.

And incase the rally fizzles out, one can always sell it if it closes the day below 67.50…and again repurchase when there is another breakout…and once the stock breaks out of the next resistance of 84 -85, at that point another incremental purchase can be made.

Any views on Elecon now? Seems like a decent breakout has happened…What does your analysis say?

Yes…it’s a breakout…and hope it sustains

Management seems to be working on debt reduction by 35 Cr this year.
Also focus is more on gear buisness which is profitable and at 50-55 pcnt capacity.
20% revenue from export focus is to increase export revenue as margins are better.
Management seems confident of buisness over a medium term horizon. 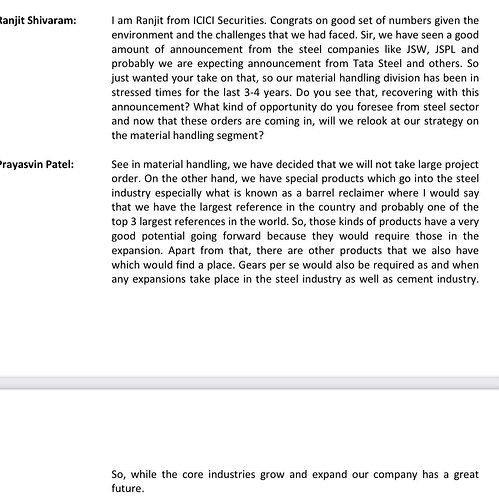 Company making barrel reclaimer for steel industry which is the largest in the country and top 3 in the world. 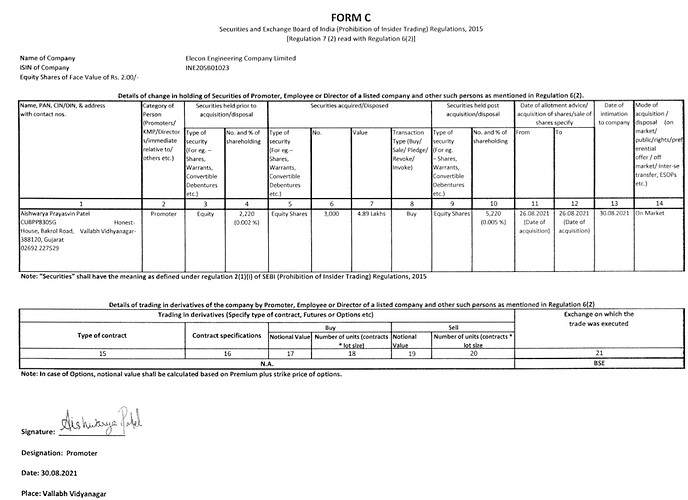