Dr. Reddy’s Laboratories (DRL) is India’s second largest pharma company by global revenues. The company was founded in 1984 and is headquartered in Hyderabad, India. DRL has ~20,000 employees, 1,200 scientists, 350 Ph.D. and amazing portfolio. DRL has been known for great science and great R&D.

Why muted performance between Fy15 to Fy18?

This is few years ago… When mainstay generics business had started coming under pressure, it led DRL to focus on creating a branded (specialty) portfolio in the US. DRL stepped into an uncharted territory and faced high investments, long gestation periods, and challenges in gaining meaningful market share issues.

At a high level had two main issues in past; one capital allocation and other execution.

Smart cos re-evaluate their strategies; so did DRL.

DRL promoters (Reddy and Prasad) hired Erez Israeli in early 2018 as COO and Global Head of Generics & PSAI role. Israeli’s long stint (23 years) with Teva has prepared him well for the job at DRL. Since his joining, DRL has been on transformation journey (almost 2 years now). Erez is promoted to CEO in mid 2019.

New strategy at a high level has been -

Next 3 years… Can DRL achieve this or better it?

To summarize: Investment thesis is based on timely approvals and slew of launches to support US sales; faster growth in Europe, India, EMs and PSAI segments. Operating leverage to kick-in as total expenditure as a proportion of revenues dips, resulting in higher OPM (conservative 25-26% EBIDTA assumption above) as DRL focuses on cost optimization and profitability by leveraging assets.

Disc: Invested. DRL is relatively new to me. Look forward to learn more together.

)
b) illustrate how my mind works/reacts on the DRL Transformation underway - my Key Takeaways captured on Page 4 on how we could take this forward. 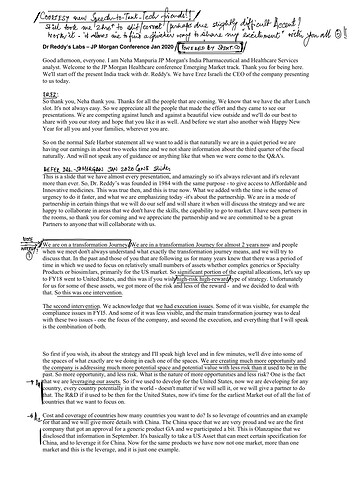 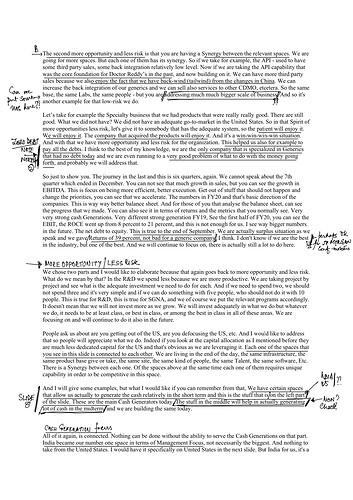 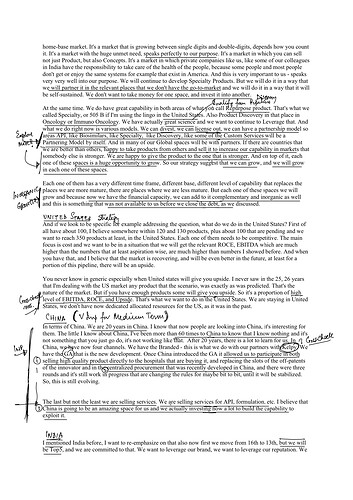 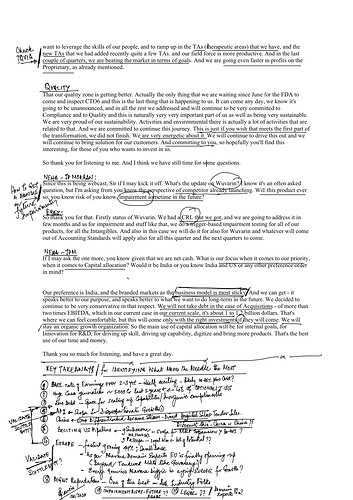 Look forward to more inputs from those who might be invested/tracking DRL
Disc: Invested. Low familiarity with business - just last 2 months or so. Possibility of blind-sides

We could quickly move to Bearish Viewpoints on DRL - there was a Baron’s Note on DRL - pointed to by @rupaniamit?? Can you work more from that perspective and pick holes in the story? Others feel free to put up your hands or invite a domain expert in.

Thanks for sharing it. @Donald. insightful. 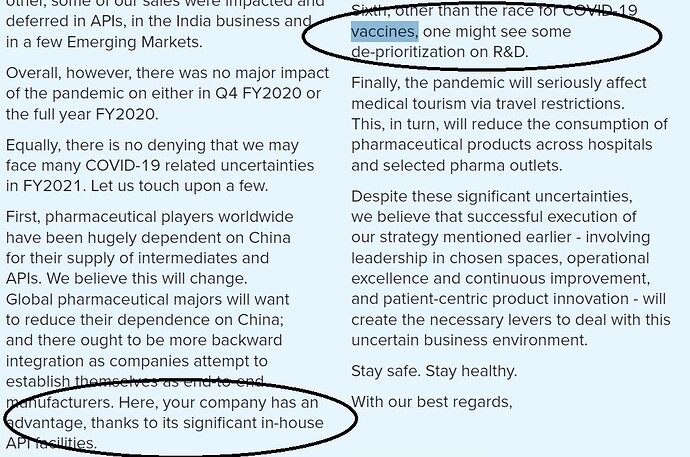 Point 6; reading between the line says they are not in deep race to find vaccination and intent to be focused in existing R&D priorities. This is sensible as per me.

To understand this, here is a relevant extract from the ARs

Additions during the year ended 31 March 2017 primarily consist of -

Some folks are asking for a screenshot of my Key Takeaways (too small to read without downloading).
So here goes.

Initially was having a tough time converting prospective Collaborators to the DRL Puzzle, even after Sandip Patel’s super posts above. But as I called a few folks and personally took them through the key Takeaways (for me) …they were ready converts.

How are they planning to take things forward?
The below enhanced Takeaway picture is a direct result of our discussions - courtesy Collaborators. 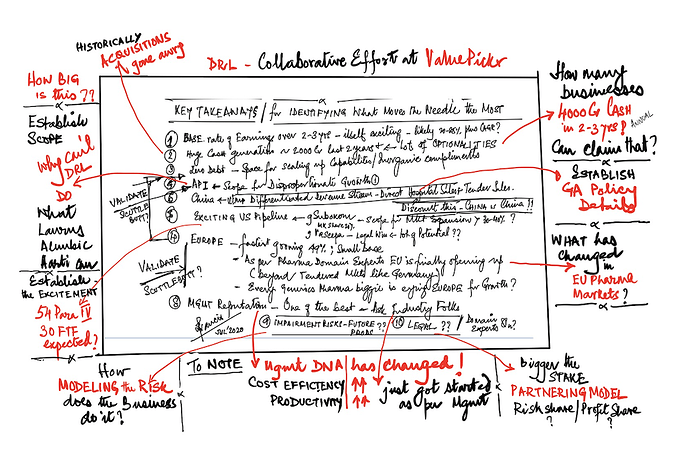 On the risks side, the key risk to be watched out here is acquisitions. Two large acquisitions in the past that have not gone well for Dr Reddy’s:-

2006 : Dr Reddy’s acquired Betapharm group for c. $570m in all cash deal, which was the 4th largest generics company in Germany at that time. The intent was to expand presence in global generic markets and diversify away from US markets. The deal was funded through mix of accruals and debt (including recourse debt to Dr Reddy’s India and non-recourse debt at German co.).

Almost a year after the acquisition, German government undertook healthcare sector reforms turning an attractive branded generics market in Germany to a predominantly commoditized tender driven business, significantly reducing the drug prices and margins. As a result, by 2010, Dr Reddy’s had written off more than 80% of the acquisition cost. They paid off all the debt (including non-recourse debt raised in Germany) from Dr Reddy’s other cash flows (which speaks about their management integrity!).

Clearly this went wrong but for no fault of theirs and was just bad luck in terms of timing.

2016 : Dr Reddy’s acquired a portfolio of eight Abbreviated New Drug Applications (ANDAs) in the US for $350 million (c. Rs 2300 crs) in cash from Teva. The combined sales of the branded versions of the 8 products in the U.S. was approximately $3.5 billion MAT for the most recent 12 months ending in June 2016 according to IMS Health. These molecules were expected to drive growth in the medium term.

Of this, c. Rs 1340 crs (c.58%) was impaired in FY 20 due to launch of gNuvaring by competition leading to loss of potential cash flows for Dr. Reddy’s.

Acquisition strategy remains a risk for any pharma company and needs to be watched out for (especially if it is a large one). Acquisitions haven’t played well for many other pharma companies as well like Lupin -Gavis, Sun Pharma – Ranbaxy etc.

For Dr Reddy’s with annual cash flow generation of c. Rs 2,000-3,000 crs, this risk again becomes center-stage. Though the new Executive Management can be expected to certainly be more cautious and twice shy (also evident in their stated strategy of – “creating more opportunities with less risk”).

On the other side, clearly the new CEO clearly has brought transformational changes here evident in increase in EBITDA margins from 17% in FY 18 to 27% in FY 20 (excl impairments). Even US FDA issues which were pending for 5+ years were finally sorted.

Looking forward from here, appended below are snippets from last few call transcripts which highlight the possible upsides to their business:

There are certain structural tailwinds also for us, such as opportunities for improving our market share across multiple markets and ramping up relevance in our global API business. Overall, we remain hopeful to continue to grow and emerge as a much stronger company, meeting the expectations of all of our stakeholders.

Question: So firstly, on the cost management. How close are we to sort of achieving the optimal cost structure that you would have desired?

Answer: I cannot quantify these numbers, but there is still a lot of room to be better. The goal is to be the most efficient company on earth in our space, and we are very far from there. So, we will continue to see these efforts also going forward.

Question: Okay. And just in terms of your commentary in some of your calls where you said that the ideal metrics that you want to target is a 25% EBITDA with a 25% ROCE. Do you think that’s something which is achievable over the next 2, 3 years? Or you would target that for the next year itself? How would you think about that goal?

Question: You expect this EBITDA margin to expand substantially over next 2-year period?

Answer : I believe that we can do much better on the EBITDA. Yes, absolutely.

Today, as we told that there are some assets in our networks, which is quite underutilized. But overall, utilization level is also something when we can do much more with the current level of investment or our network that we have created.
…

If they deliver on the above lines, this could give further impetus to the projections given above (through increase in margins).

Appended below is summary of conversation with an industry expert on various pharma divisions.

All in all, pharma expected to do very well over next 2-3 years with all spaces expected to grow – API, US generics, Contract mfg.

Separately, summary of Dr. Reddy’s launches YTD CY 20. It seems to give a sense of few differentiated launches with limited no. of players:

Conference call
Option 1: Express Join with DiamondPass™
Pre-register with the below link and join without waiting for the operator.
https://services.choruscall.in/DiamondPassRegistration/register?confirmationNumber=122477&linkSecurityString=5070ddaf

New regulations in U.S. (recent norms, which U.S. president has been talking about)

Big news for Dr Reddy’s……they have settled their litigation with Celgene, a wholly owned subsidiary of Bristol Myres Squibb related to Revlimid . 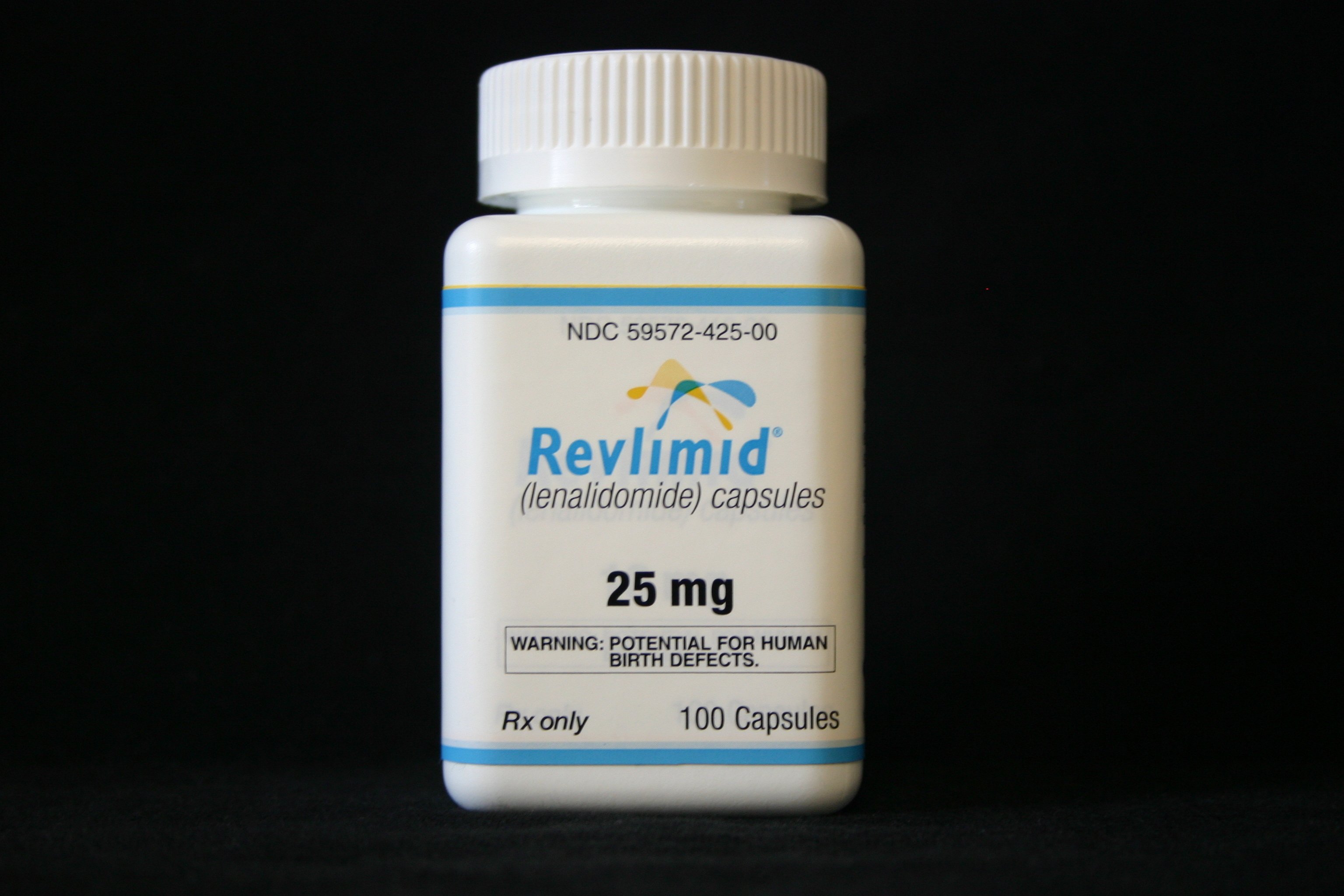 Despite more than a decade on the market, Bristol Myers Squibb’s Revlimid—formerly a Celgene bestseller—has kept growing in recent years despite patent challenges and growing competition. Riding a big approval in 2019, those...

Under the deal, Dr Reddy’s gets a license to sell volume limited amounts (% is confidential) of the generic version beginning on a date after March 2022 and sell without volume limitation beginning 31.01.26 (both subject to regulatory approval).

Phenylketonuria(PKU) is an inherited disorder of amino acid(phenylalanine) metabolism with frequency of 1:10,000. Most newborns in the US, Europe and Australia are screened to diagnose early and treatment to be continued for life long.

Kuvan(sapropterin dihydrochloride) used in conjunction with Phenylalanine restricted diet in patients with PKU. BioMarin got US FDA approval for Kuvan in 2007 which is the first specific drug therapy for PKU.

It must be a limited competition drug without much price erosion in near future as the US FDA orange book doesn’t show any other company name except innovator Biomarin and Par pharma. ( I can’t even see Dr Reddy lab name here. I must be missing something)

Pre-register with the below link and join without waiting for the operator.
https://services.choruscall.in/DiamondPassRegistration/register?confirmationNumber=5122677&linkSecurityString=e52c5aa7d

India gets its third vaccine, Sputnik V gets emergency approval

Russian Direct Investment Fund (RDIF) has tied up with a number of Indian manufacturers to produce the vaccine . These include Hyderabad based Dr Reddy's Laboratories, Hetero Biopharma, Gland Pharma, Stelis Biopharma and Vichrow Biotech for the...

RDIF has tied up with a number of Indian manufacturers to produce the vaccine . These include Hyderabad based Dr Reddy’s Laboratories, Hetero Biopharma, Gland Pharma, Stelis Biopharma and Vichrow Biotech for the production of vaccine doses.

I am adding some of my observations of DRL numbers over the last 12-years which covers atleast 1 full business cycle.

US business
DRL’s sales stagnated at ~1900 cr. in FY09-11 which was followed by the acquisition of GlaxoSmithkline’s penicillin facility in US along with rights for certain brands. This was followed by new product launches from this facility which catapaulted US revenues to 3189 cr. in FY12. The penicillin facility was recent sold to Neopharma (link). This was followed by a golden phase for DRL and other generic pharma companies, where DRL’s US sales surged from 1’900 cr. in FY11 to 7’545 cr. in FY16. FY21 US sales of 7049 cr. are still below the peak sales of FY16.

European business
The last time when DRL was growing strongly in EU was in the 2009 timeframe when Germany contributed 985 cr. to their sales. Following this, Germany de-grew drastically to 508 cr. in the next 3-years because of strong competition in the tender-driven German market. This was followed by a period of stagnation in European sales, between 700-800 cr. until FY19. Since then, EU has started growing (led by recovery in German sales + penetration in other markets (UK, France, Italy and Spain)). FY21 EU sales were ~1540 cr. (CAGR growth of 2.2% over the last 12-years).

R&D costs
R&D used to be 5-7% of sales until FY13 which was then increased to 13% levels due to DRL’s forey into complex generics, new drug applications and biosimilar program. R&D has recently come down to 8.7% of sales. In complex generics, DRL has concentrated on biosimilars (for emerging markets), opthalmology, dermatology, complex and controlled substances for the US market (IQVIA report). 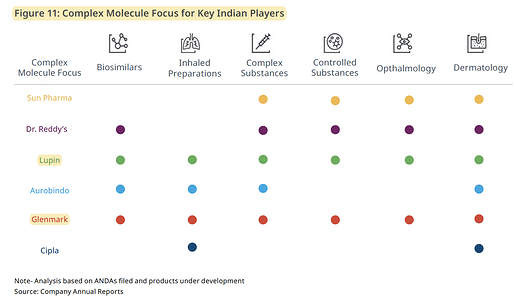 Disclosure: No investments as on date

Market Movers: Why Dr Reddy’s fell & took other drug stocks down with it

Market Movers: Why Dr Reddy’s fell & took other drug stocks down with it

The biggest trigger for the nose bleeding fall in Dr Reddy's Labs stock was hidden away in the notes to account of the companys P&L statement.