Diamines and Chemicals Ltd - Navigating for a long-term growth

Intro:
Diamines and Chemicals Ltd (DACL/Diamines) is a Vadodara-based based speciality chemical player and is the one of few manufacturers of ethyleneamines in India. The company enjoys barriers to entry based on technology and its long existence in the market. However, there are concerns on product concentration and limited visibility on long-term business growth. Though it seems well positioned to benefit from the upcoming growth opportunity.

Discovery:
Looking at chemical players (due to continued move of business from China), found the Alkyl Amines to be a promising bet, the company shares the promoter group with DACL, but there was a re-organization of ownership and the concerns were split off about a year ago, with a non-compete agreement. Amit M Mehta, took exclusive control, by relinquishing share in Alkyl Amines.

My understanding is that the Ethyl Amines are higher margin and have better process moat than Methyl Amines. Found the growth trajectory having good momentum and valuation seemed reasonable. The margins have recently become 4x compared to the 2013-2016 period. The company was in focus in 2011 but did not deliver on promised growth, it is a small player and can get crushed by imports by big players, which seems to have occurred then.

Main use of commodity products of the company seem to be deployed in Pharma and the competition seems to be mainly from China.

More details:
AR 2019 page#26 seems to show the company can be challenged due to over-supply, but it seems to have managed quite well since then and the reason might be deploying the unused capacity (of EDC) to make new sets of chemicals in demand. This EDC tech was cutting edge in 2011 but is obsolete now. 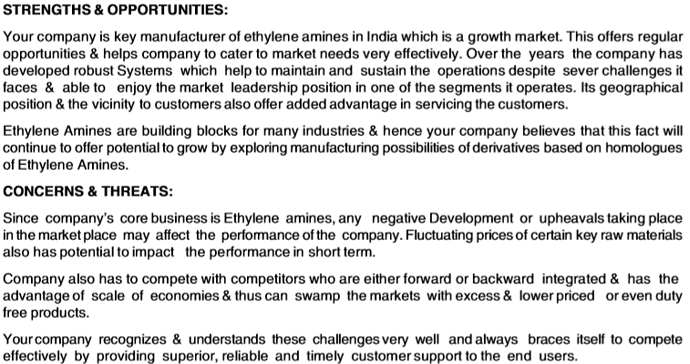 This is an excellent disclosure of the COVID-19 impact:

70% revenue is contributed by Piperazine (PIP-A) and 30% by assorted Ethylamines (EDA).

PIP-A is mainly used by Pharma to manufacture Ciprofloxacin. EDA etc. used mainly for Fungicides, and its derivative EDTA in Pharma as chelating agent. 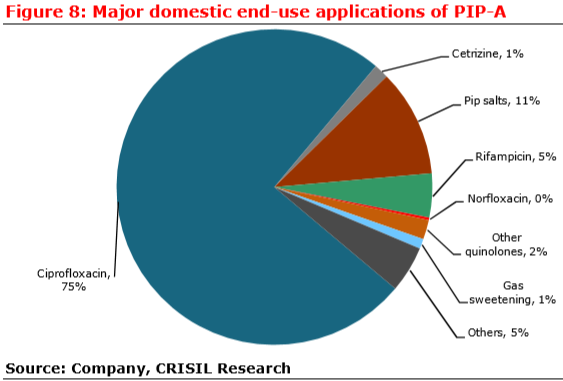 As per CRISIL the company seems to have a very restricted USP due to small size and lack of import restrictions, this may rapidly change if Atma-Nirbhar bharat special focus on Pharma and intermediates really takes off. But something seems to have changed structurally since 2016 to kick the company on a strong performance uptrend. 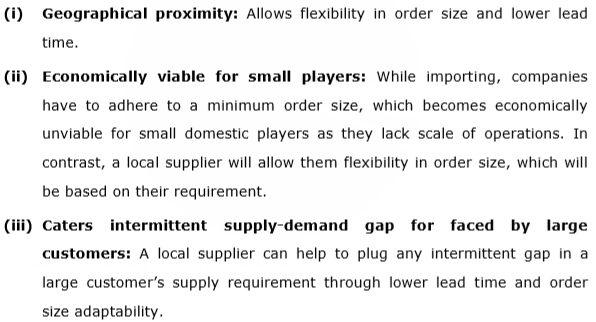 DACL past week, 35% up, hopefully results are not that bad tomorrow! 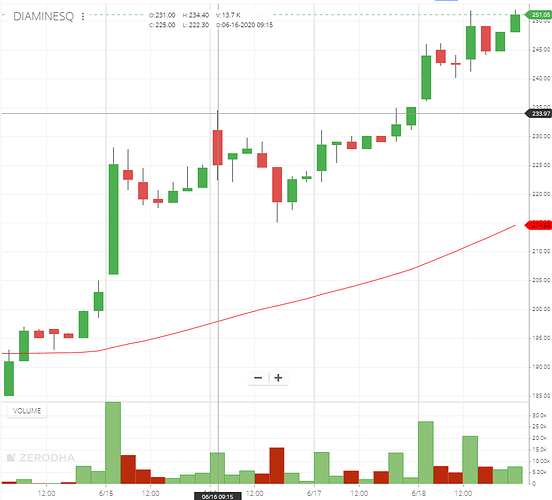 Another 10% jump today on the back of good results, 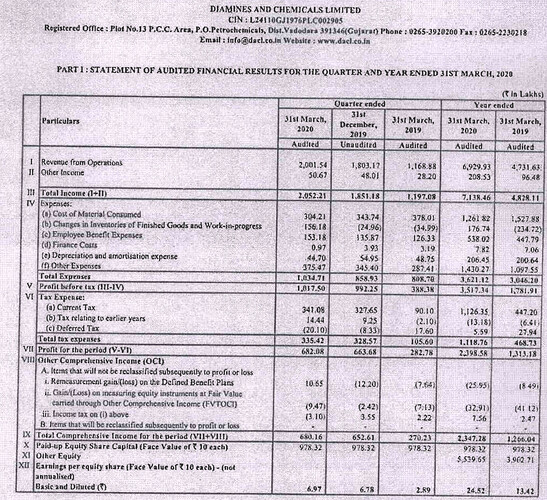 Thanks @Vivek_6954 for sharing this excellent latest overview of all the top few chemicals plays
https://forum.valuepickr.com/uploads/short-url/gNahHxsUHer05IoXDnqZGNcP7DN.pdf

Do not see why they chose BAL (Balaji amines). Apparently, some direct competition coming the way of DACL.

This maybe a positive, it shows capacity uptake is there on demand-side hence this plan. Hopefully, there is enough space and sourcing is strategically diversified by these big players to be enough for DACL to grow at a steady pace.
DACL yearly sales have just barely crossed the FY20 target of BAL.
This does mean OPM may moderate back to the historical 35% range from 50% now, no big issues if volume compensates again.

Amines or pie big enouugh for both ?Did u listened to the concall of Balaji amines or saw their PPT post results?

Any threat from China RM restriction and benefit if ADD is imposed on Chinese products?

I guess the scale of operations of both are so small, the pie size is ok, and there are always concerns on overcapacity for any biz. I guess they will not overdo to make their own profitability a concern, at least the number of players seems quite low, 2+ perhaps.

China will continue to face longer-term issues (such as due to Galwan), maybe several products cannot be easily substituted, but for Pharma and Chem space it is just a matter of time, maybe ~2 years to achieve majority substitution.

I will check the PPT, thanks!

As per this PPT I found posted today on BAL thread:

BAL Ethylenediamine+ capacity almost all in BSC (Balaji Spec Chem) is as per them 45,330 MTPA.

So, DACL is about 7-10% of BAL capacity, overall conclusion remains that customers will diversify their sources and both can play in the market and that BAL expansion + DACL bump in profits only points to a healthy market.

Alkyl Amines has zero stake in DACL as of now, they already divested their stake fully. Thanks!

See this: (this happened in Nov 2019 and got me interested in the first place)

Thanks for starting this thread. I had a couple of questions:

Nice study! I guess the 8% growth is from the out-dated CRISIL report, they had expected this to bump up in 2013, but that never happened, actually the opposite happened!
Yes, so far this is definitely a commodity cyclical, but the anti-China or China+1 story is going to give this a leg-up hopefully.
Strange, the profits are behaving anti-cyclical, such a regular pattern looks almost seasonal to me, LoL!
There might be stronger underlying reasons, such as ramp-up in capacity + margins as a result and strong vendor relations, driving up realizations!
The best endorsement, quite contrarian logic, seems to come from the immense investment Balaji Amines is making in the exact same product range! (Speciality) Chem is going to be a multi-year growth story.

DACL has enjoyed monopoly till now on Piperozine and Ethylene Amines. Now considering that Balaji Amines is also entering the same space with huge investments, won’t it affect the profitability of DACL ? Moreover, Balaji Amines is comparitively a large player and can split the market share of DACL by a considerable extent. Please share your thoughts.

Quoting from the posts above:

This maybe a positive, it shows capacity uptake is there on demand-side hence this plan. Hopefully, there is enough space and sourcing is strategically diversified by these big players to be enough for DACL to grow at a steady pace.

I guess the scale of operations of both are so small, the pie size is ok, and there are always concerns on overcapacity for any biz. I guess they will not overdo to make their own profitability a concern, at least the number of players seems quite low, 2+ perhaps.

So, DACL is about 7-10% of BAL capacity, overall conclusion remains that customers will diversify their sources and both can play in the market and that BAL expansion + DACL bump in profits only points to a healthy market.

BAL has long term plans over 3 years to ramp up production, it gives enough time to see the situation developing (and provide a safe exit perhaps), esp. in light of atma-nirbhar focus on pharma-chem. 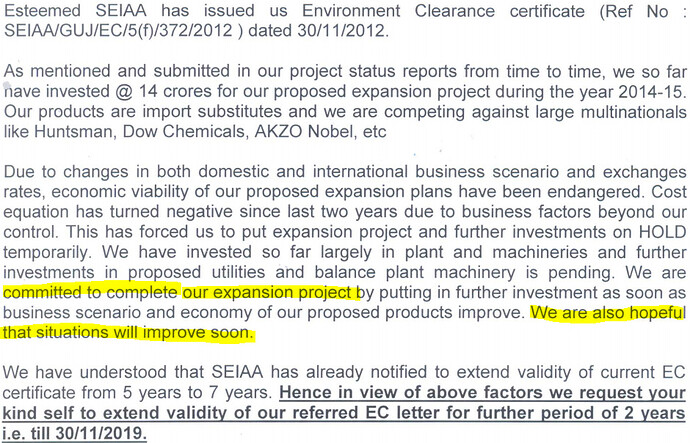 Company had a good run in terms of top-line and bottom-line from 2016 to present. However, i believe major contributing factor is falling of crude oil prices (i guess its raw material is mostly crude derivative products).No doubt revenues were supported by rising volumes (1402 MTPA in 2016 to 2322 MTPA in 2019) but realization per tonne decreased from ~Rs 2.7 lakhs to ~Rs 1.94 lakhs.

Its important for the company that crude price remain at lower levels as in past historic years when crude was in the range of $100-80 per barrel, their net margins were very poor. One can say that this crude factor will impact most of the companies in this sectors. But i feel they will be impacted most as their peers have some level of backward integration processes, so passing crude hike to their client wont be possible.

Not sure such simplistic raw-material dependency analysis explains profit variation, after all most/several producers are dependent on crude! Their margins are crude based, so fall should reduce margins.
The company’s worst years were 2014-2016 while crude had steeply fallen in Nov 2014 and reached historic lows by Dec 2015 (their worst year).

Escalating imports, esp. from China are to blamed, as per my analysis which never let the company grow. Moving of chemicals out of China since the two massive explosions, and severe crackdown by the authorities, who need to make a show of taking hard action to their chain of command, has improved the scenario in past 3 years.
President for Life Winnie the Pooh (Xi), has made it his personal mission to clean up the environment, communist style works and works best! 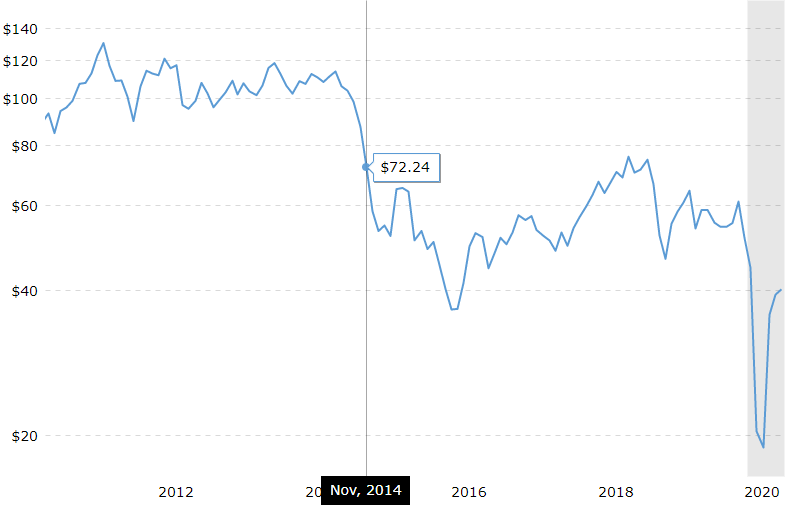 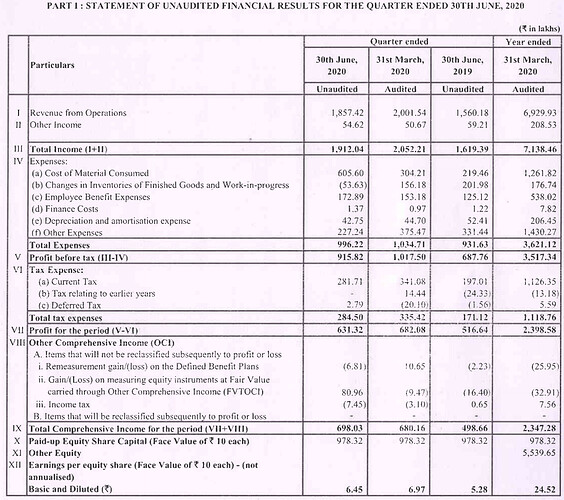 Results are good considering the shutdown had affected them for almost a month!

Power use by chemicals division has increased appreciably. 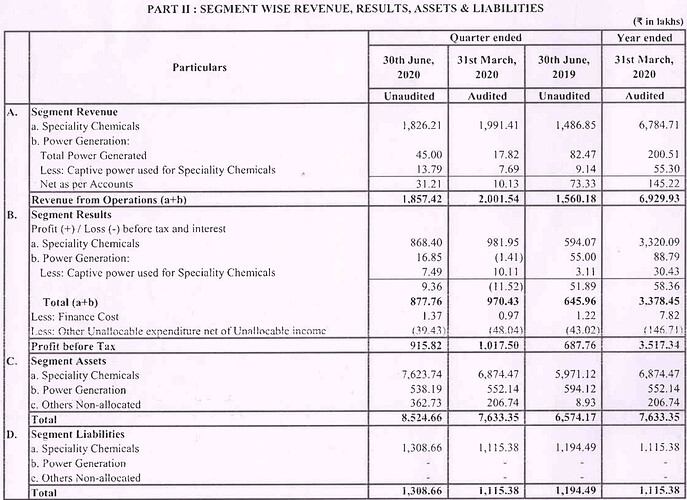 They were shutdown from 23 March till 22 April.
The Covid-19 related update sent on 6 June to BSE:

Latest AR offers not much clues to the company, except an optimistic statement of product demand remaining elevated for another year.
Negatively, they booked loss of 4.5 Cr on EDC plant having been unable to make any use of it, they think this will not be possible to use anymore.

Nothing concrete at all on expansion plans.

So, all top-line growth is just because of amines market imbalance.