Investment Summary:
I follow a framework driven approach where I look for companies with strong background, good financial and execution quality reflected through high ROE, ROCE, higher asset turnover, high PAT margin, low debt equity driven businesses with strong management quality available at reasonable valuations. However, sometimes I do break some of the rules if most of the rules are intact and there is genuine case.
During 2016, while reading an article about the current MD of crompton consumer, Mr. Shantanu Khiosla and subsequently exploring the company, I was impressed by this company during Mar’16 and took a position and have regularly accumulated it. Some of the key numbers are below: Company history:
This used to be a part of Crompton greaves. However, in 2015, Avanta holdings acquired consumer electric goods business from Crompton greaves and brought Mr. Shantanu Khosla on board.
Now, here is a brief about Mr. Shantanu Khosla:
A P&G veteran for 30 years, Khosla (a graduate of the Indian Institute of Technology, Mumbai, and Indian Institute of Management, Calcutta,) came on board when the world’s largest consumer company acquired Richardson Hindustan Ltd, known for its Vicks brand, in 1983. It was formally rechristened Procter & Gamble India Ltd in 1985. Today, the Cincinnati, US, headquartered P&G has one wholly-owned company in India, Procter & Gamble Home Products Ltd (PGHP), which sells detergents (Ariel and Tide) and shampoos (Head & Shoulders and Pantene), and two listed companies, Gillette India Ltd, which sells razors like Mach 3 and Gillette, and Procter & Gamble Hygiene and Health Care Ltd (PGHH), which sells feminine hygiene products like Whisper.
After several stints abroad over a decade, in places such as Newcastle (the company’s UK headquarters), Kobe (Japan), Singapore and Kuala Lumpur (Malaysia), Khosla, who joined Richardson Hindustan Ltd as a management trainee in 1983, opted to return to India in 2002. “It was my professional desire to come back to live here and make a difference,” he says.
In the driver’s seat for 10 years, Khosla has grown the India business revenue from $110 million (around Rs.592 crore now) in 2002 to close to $1.5 billion as of June, which roughly translates to 13-fold growth, making it one of the fastest growing consumer companies in India. In the last 10 years, rival HUL grew its revenue more than two-fold, to Rs.23,436.33 crore.
The growth came as P&G, a late entrant, took on HUL, which has been in India since 1933. In the detergent space, the two multinationals have engaged at least twice in price wars which led to deteriorating margins for both. In fact, it’s after the losses incurred in one such price war in 2004-05 that the detergent business moved from PGHH, a listed subsidiary, to an unlisted subsidiary in India, in July 2005.
The losses were no deterrent, however. As recently as 2009-10, HUL and P&G were once again warring for supremacy in the detergent space, which is one of the largest and most penetrated segments in India.
Over the last decade, P&G, which operates in 24 categories globally, has increased its presence from six categories to 14 in India and now plans to bring in the parent’s entire portfolio, with the exception of toilet paper, says Khosla.
In the last three years, it has increased its distribution reach by 60% to nearly six million stores, closing in on the gap with HUL, which reaches a little over seven million stores. It is addressing the perception that it’s relevant just to urban consumers. Close to a fourth of its revenue now comes from rural India, compared with 12% three years ago.
Source: http://www.livemint.com/Leisure/dVM4p9Ib1njpjEFxL0QkBJ/Shantanu-Khosla--The-consumer-captain.html
Key to note is he has led one of the biggest FMCG operations across the world and in India has beaten his peers in and out where in 10 years he grew revenue 13 times in 10 years against 2 times by closest competitor.

Why Khosla joined Crompton consumer?
I do not have that article but I was drawn to this company when I read an article titled “60s is new 30s for these CEOs” where Khosla was one of them rolling his sleeves to revive Crompton brand. As per article, his interest to take board position was that he has done all sorts of job in FMCG but taking an old brand, which was quite popular but had lost its charm kind of looked challenging
So, the demerged business has a history of 2 years approx. How Mr. Khosla has done so far. In order to decode this, let us see what Mr. Khosla had promised to his shareholders. This was a crisp 1-page communication with a clear cut 5-point agenda: Now let us look at how he has done against this 5-point agenda in last 2 years: As One can see, management salary is 2.5% of PAT which is reasonable and also increase in management remuneration looks reasonable considering the growth they have achieved in business. Coming to future, this is what I interpret: Note: Concall transcripts are very detailed and available at company website. Serious investors if find company attractive must go through last 8-10 quarters of concall transcripts to understand business in more detail
Disc: 6% of portfolio with average price of Rs 173

KOLKATA, MARCH 20: Electrical appliances major Crompton Greaves Consumer Electricals Ltd is hoping to close the fiscal with double-digit topline growth, even as it aims to boost brand recall amongst the younger generation. Crompton Greaves Consumer Electricals products are now branded as ‘Crompton’. Till April-December 2016 (the first nine months of this fiscal), the topline growth had been 12 per cent. The company reported a turnover of ₹2,900 crore and a profit after tax of ₹204 crore durin…

@kmadiga the highlighted thread was about cromton greaves before the industrial and consumer business were separated. So, I am not sure if the page is dedicated to CG power and industrial or CG Consumer as 95% of posts are pre demerger on demerger opportunity. Also, once the company got listed separately, no 1st hand analysis of business was conducted. Hence, I have started a fresh thread dedicated to CG consumer

Hasnt it quite run up? Seems over valued for the price atm

As it is not attractively priced, I have left it to individuals to decide on valuation.Please read my comments on valuation. Personally, my last accumulation was at 205, 2 months before. I would be interested to accumulate 20% below current price whether it comes from quarterly EPS growth or price correction or time correction. Reason to start a thread was to have page for a quality business. I have been lethargic in starting thread though was thinking from a long time.

Crompton’s launch of air purifiers in Delhi
http://www.uniindia.com/crompton-forays-into-air-purifiers-segment/business-economy/news/1035870.html
Would be glad to know any first hand feedback of product vs competitors .
Checked feedback on Amazon . With new launch and only few reviews which looks mixed to good so far except few poor ratings, but too early to say on this sample. Also, looks like Honeywell n philipis are strong players with good reviews. So, if Crompton decides to fight PAN India , this is going to be challenging and interesting. Will spend some more time on this understanding each players market offering on 4Ps to get better sense out of it 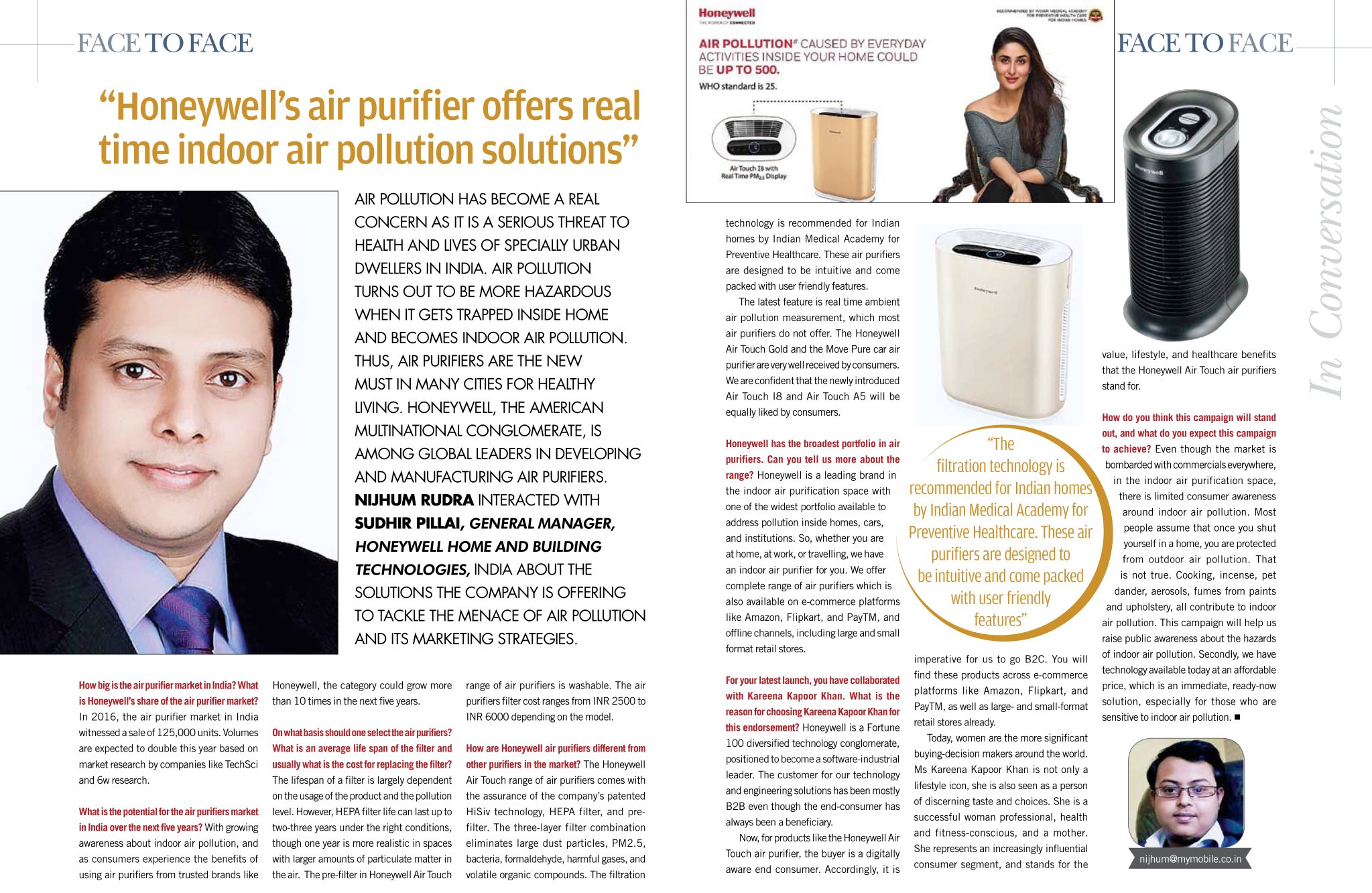 Honeywell automation ~Air purifier:This category can grow more than 10 times in next 5 years

We have delivered 11-12% growth while the market has grown 6-8%: Mathew Job, CG Consumer Electricals

“We want to ensure that in every category we play in, we are among the top 3 players.” Crompton Eying To Grow Its Share In The Consumer Appliance Market In Next 2-3...

I have taken a tracking position in CG Power & Industrial Solutions a couple of months ago. I admire your persistence in continuing to post about this company and your views in spite of little input from others. Please continue to do so. It will certainly help me.

Have you compared this with Orient Electric? There was a management change there too and the company has reported very strong numbers since. Post the demerger it looks far more attractively priced vis a vis others. They do about similar gross margins as Crompton and are present in fans, electrical appliances(coolers, lights etc) and switchgears. That said they get 70% of their revenues from fans and now playing in the premiumization theme. They were the first ones to come out with noiseless fans.

Will NBFC fiasco affect consumer durables sector and its peak valations of 35 to 40 PE.
In 2 minds whether to sell or not Expecting EPS of 7.5 by FY20, quoting at fy20 30 PE.

Decent quarter in terms of results and the innovation path continues with proposed launch of LED bulbs which can kill 88% of bacteria in room. Below are key points from conference call: Have not looked in detail but overall Crompton numbers reflect better business (as of now) whether it is margins, return on capital, inventory turns, debtor days, leverage etc.Also, one of key reasons for me investing in Crompton was the entry of Mr. Shantanu Khosla and he has been delivering what he has committed in his shareholder communication. So, would keep a watch on competition but no change of plans. More than fans, the competition has heated up in LED and if I heard it right based on q2 concall, its Indiabulls which has launched LED bulbs and killing the margins in market :). So, let us see how does it go and lets us see how does Cromton’s new innovation on bacteria killing LED lights perform in the market once launched

Crompton Greaves Consumer Electricals has the potential to become a long term holding in ones portfolio, but the thing that has turned me off from this company is the persistent pledging of shares by promoters.

There are no promoters. The promoters are private equity firms Advent and Temasek

How does crompton compare with Havells and V guard