I guess its time the company deserved its own thread. I’ve been following the Company since around May and invested at 140 levels. Brief below:-

About the Company
Creative Newtech is a distribution company that sells Samsung / GoPro / PNY and other products. They categorise them into Imaging (Zeiss, GoPro), IT (Samsung, Cooler Master) and Lifestyle (Fitness brands // Health, etc.). Since FY 2018-19, Company has forayed into two new business segments:- 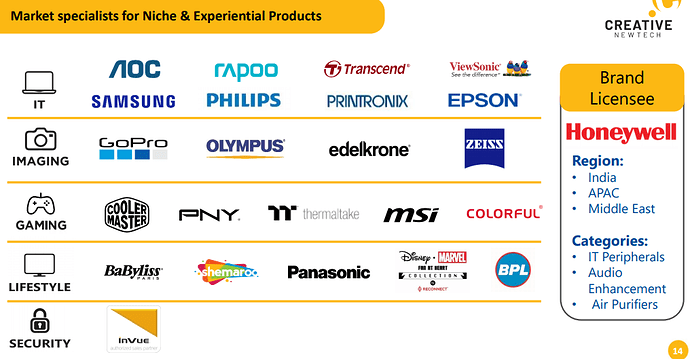 The platform is relatively small with only 200cr worth of orders placed since inception (August 2021) and bulk of which is Creative’s own business moving to ckart but as the management says, this is their “blue ocean”. In Q1FY22 con-call, they’ve said that they are consulting with their board (which has IIM prof teaching social networks) on the right skill set and organisation structure for this business and will come to a decision in quarter’s time.

Thank you @luckbychance for starting this thread. For easy reference, I am pasting here from the “Smallcap hunters” thread, a couple of posts related to the recent preferential issue at Rs 110 price by Creative Newtech:

The recent developments at Creative Newtech look interesting. I have a tracking position. However, I have a couple of questions. I recently found that the company allotted a substantial number of preferential shares (400K equity shares and 600K warrants) for Rs 110. The approval from board was received on 1 July when the share price was around Rs 186. Why was such a huge discount given? Is such low pricing even legal? Even if legal, such low pricing is against the interest of the minority shar…

This issue was spoken of in the Q1FY22 con-call and I have myself been critical of the move but here’s the perspective of management:- We were talks with these for last 1/2 years; Not sure if the rights would have been subscribed (management sounded skeptical) Said they’ll consider rights in future fund raising requirements No further immediate funding requirements, so no further dilution. And yes, the pricing is as per SEBI norms, it looks very low because the stock had a sharp upmove from 1…

In continuation of this discussion, I would like to give an example of another company that I am invested in. They waited for an ongoing upmove to stabilize before going ahead with the preference issue pricing—quite friendly to the minority shareholders.

I feel around Rs 150 to even Rs 200 could have been a reasonable price. Such preferential issue price acts as a support level for the stock price but now this support has been set too low. Even though prospects of the company look bright, the low issue price can become a self-fulfilling prophecy if there are large market corrections.

Disc: I have a tracking position.

Re air purifiers, the management in Q1FY22 con call indicated that while earlier air purifiers were more of a North India thing, but because of COVID and HEPA technology of Honeywell which has filters designed to stop the flow of COVID virus, they’re seeing a broad based demand.

Honeywell and other potential licensing agreement if they execute well are definitely the interesting aspects to watch out for.

Anyone has any insights as to who gets the sale revenue from product sales on amazon etc? I see Honeywell purifiers listed there and the seller being Cloudtail. The Company says that they have an exclusive licensing and distribution arrangement with Honeywell for such products.

I’m a little confused then with Cloudtail selling these products on Amazon? Or does Creative sell these to Cloudtail as the retailer?

The company has come out with its annual report. Will post detailed insights later.

And i’m not even taking Honeywell business into account, which should be an extra 80 to 100 crs as guided earlier. Co should most likely exceed its guidance for FY22

Guidance for FY23 for the Honeywell business 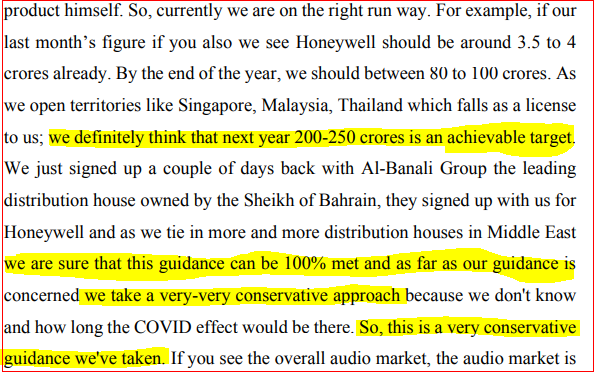 3% royalty payable to Honeywell or a certain fixed value, whichever is lower. Beyond a certain level of sales, operating leverage should kick in and royalty would become redundant. Right now, the Honeywell agreement is till FY 2025.

Is anyone aware of revenue they generate from contract manufacturing. Also do they have any manufacturing setup for honeywell?

Is there any concrete plan for contract manufacturing on scale going forward?

Hi, I think they are into “brand licensing” arrangements. This is slightly different from contract manufacturing. A dixon doesn’t do any marketing and doesn’t create its own marketing channel to sell products. Creative does that for Honeywell. That is one.

Secondly, Creative has clarified on their con call that they don’t own the manufacturing facility, but, they scout third party manufacturers under the standards of Honeywell and then Honeywell inspects the facility. The products are then manufactured and sold by Creative.

The revenue from Honeywell business (sole brand licensing business) is guided to be INR 100cr in FY22.

Hope the above helps.

Not sure what has happened in this counter. But this is now at lifetime highs. I expect Q2 results to be good and here are my expectations:-

Consolidated revenue: 210crs of revenue (70cr *3)
EBITDA margin: To improve to 3.5 to 4% on a consolidated basis (reason: expecting higher go-pro sales which is relatively higher margin product for them). Standalone EBITDA margins could cross 5%.

Valuations
12. Price has moved up a lot - currently trading at a mcap of 457crs which is 10x officially guided EBITDA for FY23.
13. Due to diversified nature, need to do a SOTP analysis here. Page industries is valued at 50+ FY23E PE. That is also because of the certainty on long term licensing arrangement it has (Page has licensing agreement with Jockey until 2040 whereas Creative Honeywell agreement is until 2025 for now)

Imo, fairly valued right now. Although all estimates that i’ve assumed are very conservative and upside is likely here. Key focus area to track is the FMSG business which includes the Honeywell licensing business.

Why the EPS in consolidated result is less than previous quarter ? 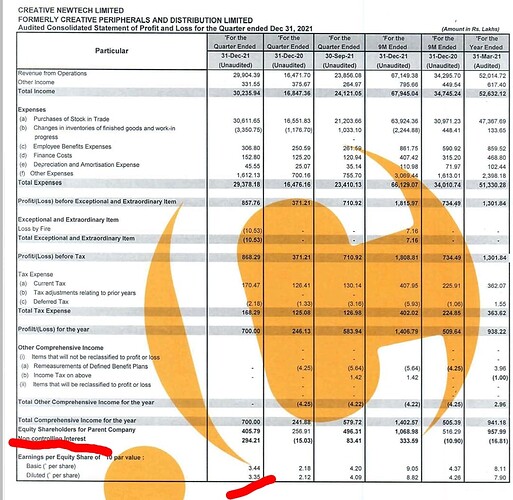 Yes, it is strange. There is no detailed description of the ownership structure of the subsidiaries anywhere in the investor presentation or the results.

I found the following statement in the latest results:

A few months back I did not like the very low price given for preferential allotment to particular persons when they could have allotted at 3-4x price simply by waiting for a few weeks. Now, it is very important that the company clarify on this increasing non-controlling interest.

In the last concall, it was discussed that the company’s holding in the Hong Kong subsidiary named Secure Connection Ltd reduced from 70% to 52%. The details of this transaction are unclear and probably was not even notified to the exchanges. I could not find the details of the other shareholders of this subsidiary. This explains the increase in non-controlling interest.

As one can see in the last Annual Report, there is another related-party company named Secure Connection Private Limited seemingly based in India. Two companies by the same name, one subsidiary and another held by the promoters looks suspicious. Furthermore, there are 2-3 more related-party companies doing transactions with Creative.

My image of good corporate governance in this company has gone for a toss after I got to know the above information. Most likely I will exit the stock soon.

There isn’t much difference in consolidated and standalone revenue

Standalone revenue does not matter much if a major portion of the profit is accrued to the obfuscated subsidiary.

The full picture can be clarified only by the management but I have my doubts about whether they will clarify, given their past record.

Try to buy or sell a small quantity. You will observe instant new orders. The counter seems to be a favorite of algorithmic traders. The trading activity is unrelated to the company management/promoters, although previous observations show that they appear to be quite ‘creative’.

Was just wondering why should a brand licensing arrangement with Honeywell command an EBITDA margin of 15%+ eventually? Read somewhere that this can be scaled up to 18-20% margins (basis revenue growth). Can anyone help me draw a parallel here with another listed brand licensing entity?

I would have thought a 15%+ EBITDA margin in Honeywell would make sense if they were manufacturing in-house. Here they outsource that as well. Are gross margins so high that they can get such a margin?