The stock appears to have reasonable margin of safety (Excluding promoter integrity issues as highlighted earlier in the thread).

There are two points needs deep digging in consolidaed statement.

What is the capacity utilization of CMI , I think with Shilpi Cables going bankrupt , CMI will get bulk of the contracts if they have unutilized capacity for those.

CMI has won two orders this week: 1) Supply of 66KV xlpe cables to Gujarat Energy Transmission Corporation Limited worth of 36 cr 2) Supply of signaling cables to Central Railways worth of 86 cr. Both orders will be executed in the current fiscal year.

As mentioned by earlier members I have googled about the management integrity and related topics, but I could not find any thing, infact for that matter I have found that management is aggressive and good. If some one has any information please share it along with its link. Secondly why the stock has corrected from December 2015 levels(ie-400), any specific reason that we are missing,thirdly why the consolidated balance sheet is showing cash from exceptional items in Fy16 as 91.74cr, for what reason they got money which is being reflected in PAT? ,lastly promoters have issued warrants and diluting the equity, any specific reason for the same? Any information is most welcome on my above concerns.

Revenue for FY17 grew by approximately 30%.
I don’t understand why would a management come up with such over ambitous goal.
I like managements who give conservative estimates and then over achieves it.

Do some research, you will some related companies and their past.

Can you post links of your research, I couldn’t find anything bad.

Actually the revenue growth from FY 16 to FY 17 was 57.3%. Please do not misquote numbers to further your agenda.

Has anyone been able to find the tenders won by CMI recently on the client websites (BHEL, railways etc.)? Would be useful to also keep track of future tender awards.

What quote are you talking about? The numbers you gave and I gave are same?
But what the promoters said they would, they couldn’t. Thats what I was mentioned.
And what is the agenda you are talking about?

Any Idea when the company will publish its AR(Why have they not published it till now, whats the problem…I think something major is cooking up) and when is the Q2 results.
Anyone any idea

Indian Railways is fast-tracking its electrification plans under Piyush Goel. He is shifting the model to large scale tendering of 500km blocks of track length to drive down costs and speed up execution. This is similar to his strategy in MNRE of moving power procurement from Feed in Tariffs to online auctions which drove down power prices.

Railways electrification is one of the major catalysts for CMI’s growth as also highlighted in last AR:

Full Mint article: Railways To Issue Large Tenders Of Up To 1,500km For Electrification | Mint 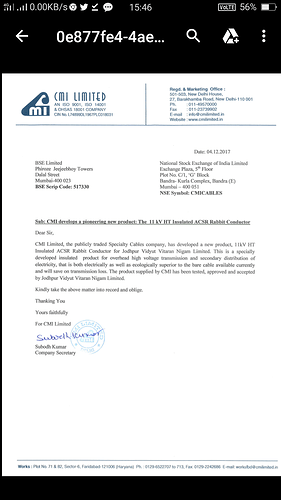 tell me page number ? i read AR 2016 but i didnt find anything about the order book. 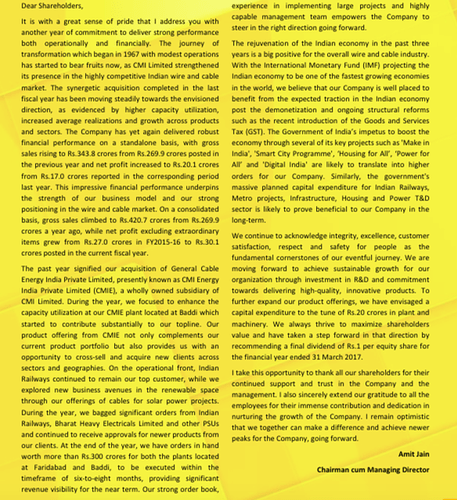