Chemcon Speciality Chemicals Ltd is in the process of listing right now, with IPO closing on 23rd Sep 2020. With Spec Chem being the flavor of the season, decided to have a in-depth look at this one to find if its a red herring just riding the wave, or if it can deliver true value over long term.

Business Analysis
Since the company is in listing process right now, financial data is available only for limited period of FY17, FY18 and FY19 in DRHP document.

There are couple of additional significant Red Flags about the promotors

Yes, Price to Book valuation is definitely high. Its a larger issue in a way, as to how market has been valuing the Spec Chem stocks in general in recent years. So Rossari, the other blockbuster IPO this year in spec chem space is being valued at 21.8 times book value, Vinati is sitting at 10.69 times, Alkyl Amines at 12.4, Black Rose at 9.79 and Navin, Aarti and Atul at relatively modest 7.6, 6.09 and 5.9 times book value respectively. Ideal situation would be to enter Chemcon (or any of the other names mentioned here) at much lower levels. Whether the market gives such an opportunity or not, only time will tell. I would prefer waiting for correction to enter at lower valuation.

Someone Please help in decoding results.

The result looks like thumbs down to me. Here are few observations 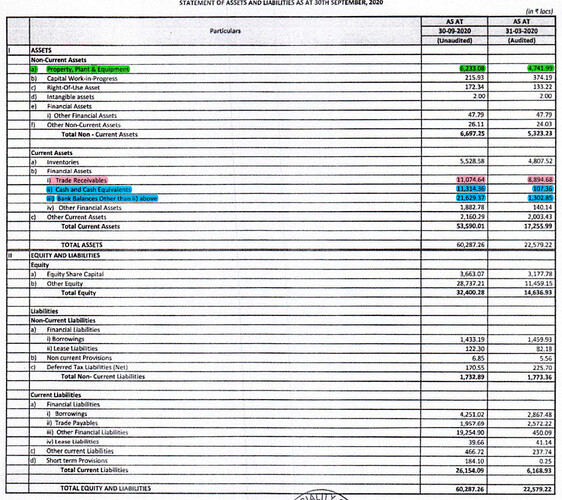 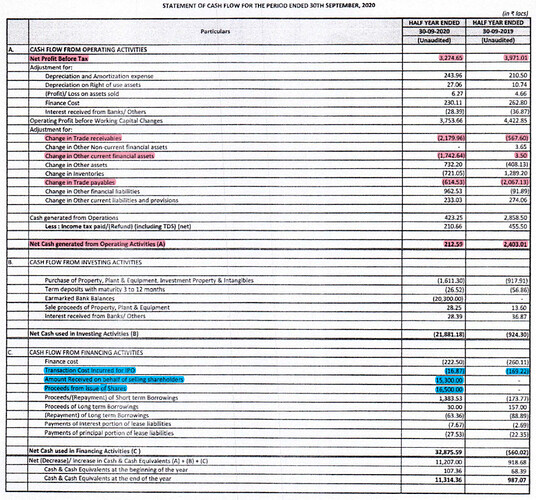 With this, its very important to watch out for the following in the next 2 quarters, and beyond that too

If these do not improve in next couple of quarters, this could be negative for the company.

Conclusion: They have capacity in place problem is realizing the business. Global production is less than the global capacity so definitely there will be pressure. But with economy of scale and low labor cost they can prevail.

I dont know much about Technical analysis, but read that the stock witnessed a breakout yesterday. Has seen a very strong up move in the 2 trading sessions since yesterday.

There have been a spate of bulk deals yesterday, some with a very strange short term pattern (marked under red block), and onhuge one which seems to have caused the strong break out and price movement.

Though these short term signals are strong, will wait for the Q3 results to be out for clarity on the long term direction.

From the last investor call transcript, the management looks very confident of future growth. I think the company is in the right space to tap the opportunity. Even the past financial performance reflects the same.

There are a couple of Pros and many Cons in CSCPL as I fundamentally see it. It also appears to be over-valued at the moment.

Disclosure - Had some positions. Exited in the recent rise. Planning to re-buy on dips to have some margin of safety.

Chemcon had posted good set of Q3 numbers both on YOY and QOQ basis. 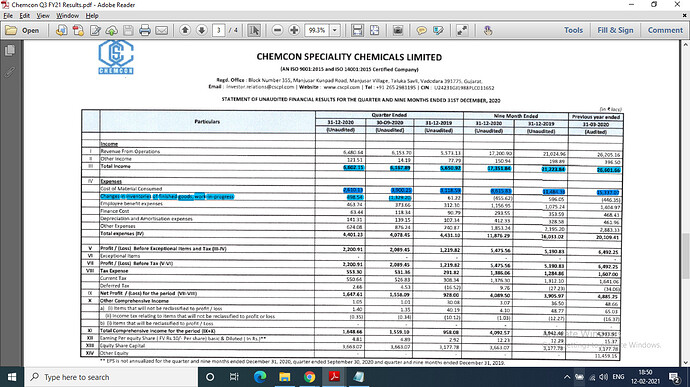 Had a quick look, seems at best like a small reversal in de-growth trend seen since last year.

So in summary, continuing from the questions raised in my post on Q2 results

With this, its very important to watch out for the following in the next 2 quarters, and beyond that too

Revenue shows a decent improvement. Lets see how the trend continues in next quarter.

Positively, the COGS shows a downward trend, helping shore up the margins. This however, needs long-term mitigation through long-term purchase contracts with vendors.

In absence of Balance sheet data, remains to be seen.

Remains to be seen.

One of the main purpose of the IPO was to raise funds for capacity expansion. There seems to be very slow progress on this front. Of 41 cr earmarked for the CAPEX, only about 4 crores or roughly about 10% have been utilised in the 3 months since the IPO. Please note that the company does not need to spend any money on land, as the plants are to be setup on their existing site. So the planned CAPEX is only for civil and machinery / plant setup. Additionally, the company had already obtained quotations for Civil work, plant / machinery / equipment in late 2019, from leading vendors. Especially within this context, I think the progress appears extremely slow. Though its not clear what their implementation timelines are, if there is any delay it could lead to cost over-runs and will delay the revenue growth even further

Please check their Investor presentation, worldwide production(of company products) is already more than the demand so expansion does not make sense.
While economy of scale might help but demand shall be there.

Whilst you spoke on the revenue growth, would you also give some color on their bottom line performance? Thanks.

Ideally with lower RM prices, bottom line should have seen significant improvement in this quarter… however, part of the gains there flow into the increase in inventory to the tune of about 5 cr. Other than COGS, most of the expenses are more or less flattish, hence on a higher revenue and lower COGS, net profit could have been higher, but for the change in inventory. The problem however is in the long run… every upward swing in RM prices will squeeze the margins for them, due to the fact that neither they have long term procurement agreement with their vendors, nor do they have significant pricing power with their customers. For them to have predictability and stability in margins, they need have a mitigation strategy in place.

The reason I stress more about revenue growth for Chemcon is because almost 2/3 of their revenue comes from Pharma industry… and they have grown significantly in last 3 years prior to IPO based on pharma products. Given the world we have seen in last year, all strong pharma companies have grown much faster than their past averages. So why not Chemcon? ARV products have been a raging success for several companies like Laurus Labs, Hetero, Aurobindo, and its important to note that all of them are Chemcon’s customers. So the same product category is driving explosive growth for Laurus / Hetero but not for Chemcon? I will be honest to say that my knowledge in this sector is very limited, so the reasons may be very obvious to people who know, but not to me. There has to be something missing here that we cant decipher or are not aware of.

@ankit_tripathi since I have not seen the presentation you are referring to, cannot comment on it… will be happy to look at it if you can share a link…but yes, you could be right, that the current production / supply of Chemcons products may be larger than demand… having said that, that does not necessarily mean that a company cannot expand its business, or should not expand its capacity. That will be taking a very narrow view of the given data. Let me elaborate on this, and for this I will paste some lines from my very first post on this thread.

Please refer to the above points… There is strong growth projected in these products, not just in India but globally too. Now, its possible that projection for growth could go totally wrong, so lets just ignore them for now… In both these products, India is a net importer by a massive margin. This despite Chemcon being India’s ONLY producer of HMDS and 8th largest globally… and India’s largest producer of CMIC and 2nd largest globally. Given its market leadership position within India, and given all the anti-china rhetoric in recent past (and the china + 1 strategy) expanding market share aggressively through import substitution should be well within its reach.

What stops it? Current capacity utilization. Capacity utilization in FY19 for HMDS is 93%, for CMIC is at 95% and for Bromides is at 57%. If this data is true, then capacity expansion is the only logical way ahead. Besides, the IPO event is barely 4 months old… so if the company did not have plans to expand, why would it launch an IPO with one of the stated objectives for fund raise being capacity expansion? Hope this clarifies.

Probably you are missing few facts. Also I suggest you to have a look at their last investor con call and the last investor presentation for better perspective. Also Q3 investor call is scheduled on Feb 16th. 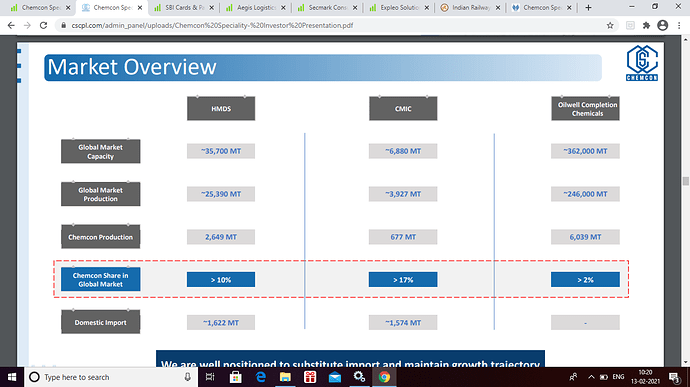 Chemcon Vs Its Peers on some important parameters:

Working capital intensity remains high in our business which reflects in our financial statements. Our accounts receivables has increased in line with our growth in business. Infact this is one of the reasons of IPO Fund raise is augment long term working capital.

Further in our business many of the raw materials are required to be imported. In view of the anticipated challenges in raw material sourcing during pandemic, the company had built an inventory of raw materials resulting in higher inventory days during H1FY21. Further large part of H1FY21 sales took place in Q2FY21 and therefore the debtor levels appear high which is anticipated to normalize in the coming quarters. Finally the pandemic has caused all suppliers to extend credit period to clients which has resulted in slow realization of debtors. The company is confident on debtor recovery and manages prudent risk management strategy to realize its monies.

From the recent investor call transcript…