Bharti Airtel - What doesn't kill you makes you stronger?

Telecom is probably one of the industries which any potential investor seeking to compound returns over long periods of time will want to stay away from - significant capex intensity, heavy under-trading of ARPU’s and the periodic interference by Governments.

From clocking net margins of 24% in 2008, Bharti’s net margins have fallen to a meagre 2% as of FY’17 ( and are likely to be heading further south this year) . However, what is even more painful is that IF you remove Other Income from profitability, the company has actually reported a loss at Net level in 2017 and is barely managing to stay in black this fiscal - all thanks to Mr Jio’s nonchalant grip on the Pricing metrics of the industry.

'If you can’t beat’em , join ‘em’ has been the catch phrase for the industry as marginal players have finally given up the ghost and joined hands with the bigwigs. Competition has fallen from 15 players in 2012 to just 3 currently

As Bruce Berkowitz says, focus on where the puck is going and not where it is at currently.

The current scenario -
The telecom industry is currently a battleground for just three players who are in charge of serving 125cr mobile connections in the country - with little by way of ensuing profitability - which raises the question? has this business become an eventual charity?

Charlie Munger, when asked about his wife’s ex-husband famously said ‘you’ve got to ensure your competition is weak.’

For Bharti, competition stems mainly from Jio who has been on a nonchalant capex drive to garner market share. The company is now targeting the existing 2g subscriber base of Idea Cellular and has again resorted to a tariff war in order to get incremental market share. On the demand side, data has become the be all and end all source of entertainment and work for a majority of the Indian population. From being a luxury, data is now a necessity and most of this boils down to Jio’s agressive stance on pricing. It would be safe to say that data penetration is only expected to rise with time ( current data users in India stands at approx 45 crore vis a vis total mobile subscription base of 120cr)

The key risks -
When does all of this demand growth actually translate into numbers for incumbents. Bharti guides for an annual capex figure of 25,000cr and mentions that the high capex intensity is stated to continue( remember, this is after incurring a massive 60,000cr over the last three years). Idea and Vodafone are now gearing themselves up for a 60,000cr round of capex in the next three years. With industry profitability already nearing the zone of danger, one wonders as to how long are earnings going to remain suppressed.

I am attaching my notes from Bharti’s conference call and a few other links to help boarders get a better understanding of the industry in general and the current scenario.
Airtel and Telecom.docx (19.5 KB) 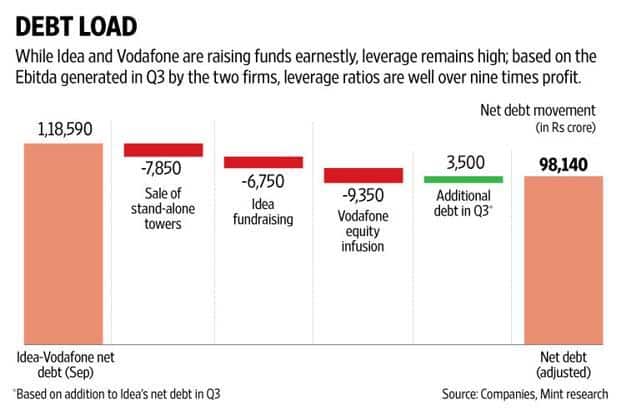 In building war chest, Idea Vodafone can take a leaf out of Singtel’s books

If Idea-Vodafone use a structure to have joint control, it can open the tap to a large source for funding, which will help the merged entity effectively compete in the marketplace Do Idea and Vodafone’s merger terms need a rethink?

Conclusion - For any upside risks to RoE’s , both Net profit Margins and Asset turns have to increase . Net profit margins are a function of the ARPU recovery going ahead AND asset turns are a function of internet penetration( which in my mind will only go up with time) and ARPU’s . Timing the ARPU recovery is something potential investors need to watch for as that is the single biggest driving factor behind this case

Disc - token quantity; still building up on the thesis

With the fresh capital, the company aims to continue its investments in future rollouts to build large network capacity.

An industry in which the raw material (spectrum) is being bid up & getting expensive and ever evolving (2G to 3G to 4G and now 5G in less than a decade) and in which the players have no pricing power to speak of (at the moment) is not good in my opinion.

Let Mr. Ambani come to his senses on the pricing front and then we can have a second look. Vodafone Idea merger doesn’t look like it’s going to survive with a combined debt load of 1.23 lac crore, a paltry capital raise of 25K crore & poor EBITDA compared to peers with a fast eroding subscriber base.

Somewhere I think Jio is taking away the 2G/3G subscribers of Airtel, Idea and Voda and will be able to upgrade them on its network with its superior content partnerships and better network performance.

Airtel is raising money at a 30% discount to the market price but it looks better positioned to compete, with its well performing Africa operations.

I think both the short term momentum, and long term value creation( via increasing operating leverage ) is turning in favour of Airtel. The QIP had a great appetite & most of the risks are priced in. Could lead to serious profit increase,if the ARPUs start moving up steadily. A duopoly (with Vodafone Idea in bad shape) in a proxy consumption sector, with the GOI keen to support the sector is an attractive investment thesis