Company Background
BCL is a part of the Mittal Group founded in 1976, by Late Shri D. D. Mittal. Under the stewardship of Mr. Rajinder Mittal, the company has now grown into an Rs1400crs business empire.

The company is a diversified conglomerate in manufacturing and development with business interests spread across a variety of industry verticals namely Edible Oil and Vanaspati, Distillery and Real Estate.

The company distillery can also manufacture Ethanol along with ENA. After the launch of the Ethanol Blended Petrol (EBP) program the company converted 130 KLPD of its existing capacity into production of Ethanol.

Oil marketing companies (OMCs) have recently allocated BCL to supply 36mn liters of ethanol from its manufacturing unit at Bathinda. Further, the company has also applied for additional quantity of 5 million liters. The total sellable quantity to OMC’s will be 41mn liters for the period from 01st Dececmber, 2021 till 30th November, 2022. BCL has been supplying ethanol to the OMC’s since 2018.

BCL distillery can manufacture ENA/ethanol from multiple crops which has reduced its dependency on a single crop and thus the company can avoid the vagaries of raw material price fluctuations.

Capacity expansion of 3.5x times
The company currently has 200 KLPD capacity in Bathinda.

300 KLPD addition in West Bengal
BCL wants to capitalize on the ENA deficit demand scenario of North-Eastern India by setting up a 200 KLPD state-of-the-art ENA plant at Kharagpur, West Bengal. The company has joined hands with M/s. Svarna Infrastructure in building this capacity and owns 75% equity in this new project. The capacity is expected to come online by Q4FY22.

The company plans to further expand this capacity by another 100KLPD by Q3FY23 as land and power required for further capacity expansion is already in place.

200 KLPD addition in Bathinda
The company has obtained permission to add another 200 KLPD Grain Based Biofuel Distillery in Bathinda. All the prerequisites for expansion like land, power and cheap finance (interest subvention) are already in place and capacity is expected to start production in Q3FY23.

Latest update on capacity expansion as of Jan 11, 2022
We hereby submit business update that the initial plant testing at the 200 KLPD Ethanol plant of Subsidiary of the Company viz. Svaksha Distillery Limited has begun and the commercial production at this plant is expected to commence in the next few months before end of financial year 2021‐22. The Unit is being set up without raising any debt.

Further, the Subsidiary of the Company has also obtained in principal approval from MoEF for enhancing the capacity by another 100 KLPD at the same premises. The Subsidiary has all the requisite land and utilities arranged for the expansion. The work to install and establish another 100 KLPD will begin soon after commissioning commercial production at the 200 KLPD plant and will be executed at minimal capex due to the existing facilities. The 100 KLPD expansion is expected to be completed in financial year 2022‐23.

After the commencement of commercial production at Svaksha Distillery Limited in year 2021‐22 and the proposed expansion plant of 100 KLPD, the total capacity of the Subsidiary of the Company shall be 300 KLPD.

Further, as already informed, the Company (BCL Industries Limited) is also undergoing the expansion at Bathinda Unit by way of setting another 200 KLPD plant. The work for the Bathinda plant is on‐going at full swing. After commencement of commercial production in its new plant, the total capacity of the Company in Bathinda shall be 400 KLPD.

With all units of the Company and Subsidiary generating production, the total capacity of the Company (BCL Industries Limited) together with its Subsidiary (Svaksha Distillery Limited) will be 700 KLPD and we will be one of the largest producers of Ethanol from grains in private sector in India. 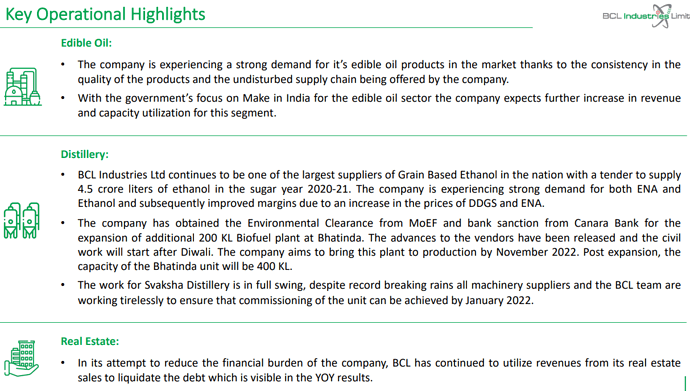 Key risks
Broken rice is mainly used to produce ENA and any rise in its price will directly impact gross profit.

Final product prices are decided by state/central governments and/or OMCs (oil marketing companies) and hence, regular price hike is not a guarantee for profitability.

Ban on sale and consumption of alcohol in Gujarat, Bihar, Nagaland and Lakshadweep. If the governments in states that BCL operates in decide to ban or restrict the use of alcohol, it will have an
adverse impact.

Execution risk as the expansion undertaken is massive.

Extrapolating 1HFY22 numbers the company is set to do Rs80crs plus in FY22 and is trading a P/E of
14.1x at the current market cap of Rs1127crs with 3.5x capacity expansion over the next 2 years 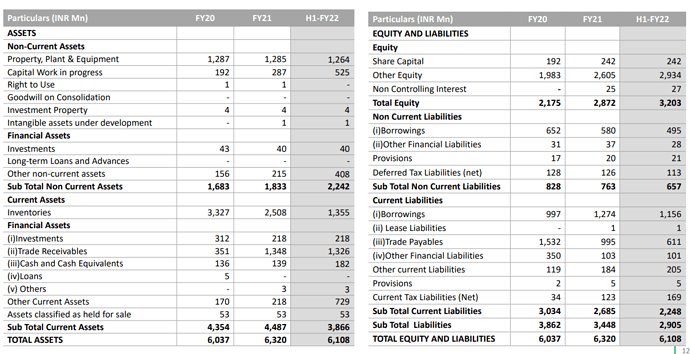 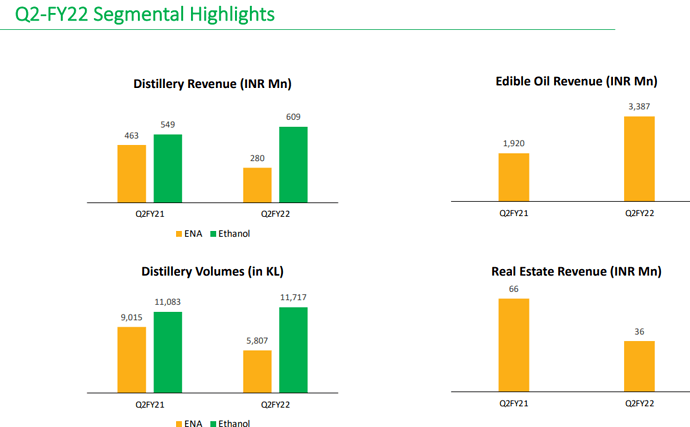 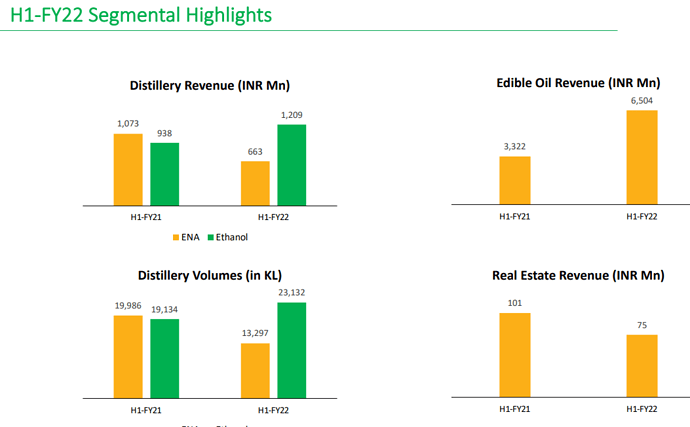 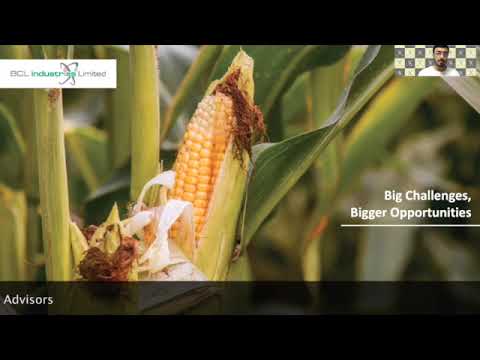 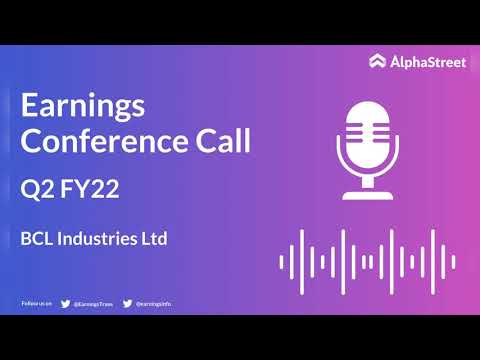 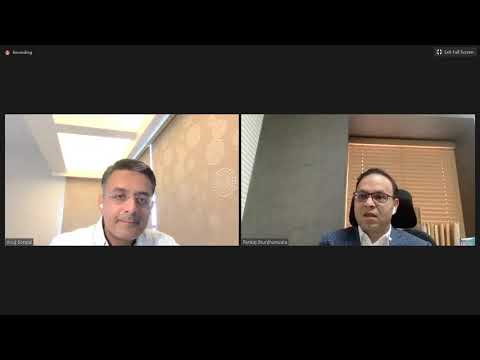 Company is expanding its great but one thing which disturbs me is their expansion speed look from 2018 they are saying that We are coming up with a distillery in west bengal and in every concall they used to delay it’s commencement And now they inform that they got it ready and it will be ready to use from Q4FY22 It’s now great that they achieved their target but they have taken too much time don’t you think?
And now they are expanding more What if they took same time that they have taken for west Bengal I know it will be less time as campare to west bengal bcoz they have taken all permission and rights and GOI is ramping up Ethanol programme,but what if they takes too much? May be more than Q3FY22

Most companies plan capacity expansion assuming a certain amount of demand. If the demand takes longer to come through, companies delay capex. No point putting up capacity ahead of time.

Also in India it takes time to get various permissions and clearances. This is what causes delays. The actual construction gets delayed rarely. In the case of BCL all clearances and permissions are in place. So the chances of delay of in expansion till 700 KLPD is less. Yes expansion beyond that could get delayed.

Okay got it If you have studied the BCL can you just tell me their Edible oil segment How you see their business? Does they are able to scale up bcoz its Volume business not margin business

could you please shed some light on the debt they are intended to raise? per Q2 concall transcript, I see that debt will shoot up 25% on the current level 280 crs post-implementing 700 KLPD. I tried to figure out the current rating for this company to withdraw an impression that a better rating company offers the debt with a lesser interest rate, however no information I found about this. 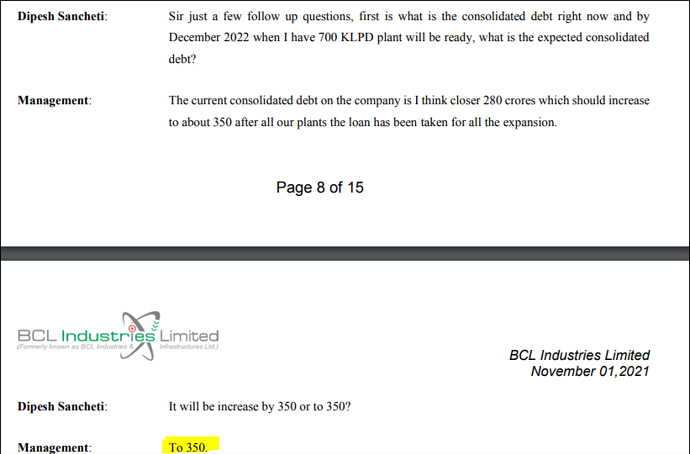 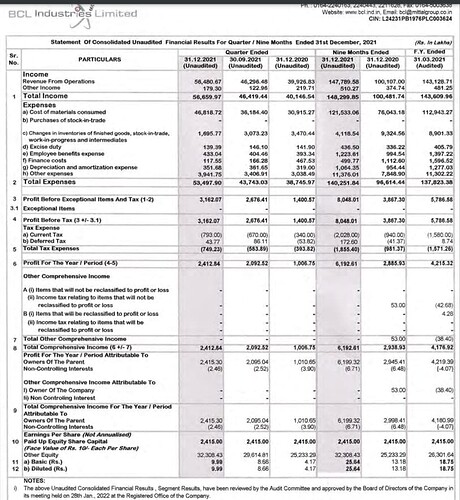 In one of their notes, I noticed the management mentioned they want to move away from their real estate business ?

I think they just want to sell out their inventory and use the amount to reduce debt let’s see they have guided to complete this process by FY23 end.

Yes they dont intend to expand into RE. They are just selling the remaining inventory. They would have ventured into RE few years back when there was no Ethanol play and margins of their original business i.e. Edible oil was low. Companies Corp Gov used to be dodgy, but offlate they have improved. Last year they issued good dividends to non-promoter shareholders. Also investing in their Investor Relation management. They have been sharing quarterly investor presentations and conducting calls.
The headline of the original post says 3.5X in 2 yrs, though true, but the important thing to note is that the capacity will be 3X by end of this calendar year. Currently, major profit comes from their ENA/Ethanol plan whose capacity is 200KLPD. By Mar end capacity will be around 400KLPD and by year end 600KLPD. So you can do your calculations about the EPS.
Now, even the edible oil segment is doing better now which has been since many years under-utilized (around 50%). Now it seems they are at 70%.
Disclosure: Invested.

@njain1983 . Thanks. Fair point. Indeed I noticed the same in the last Q3 results note. They are only selling the remaining inventory. In Q3, there seems to be not much inventory to sell off, therefore the revenue from that was not much. But at least, the management’s intent to reduce the debt from the proceeds of RE seems to be good idea. I think they did to a larger extent as they said. Any idea what is their current capacity utilization for the current 200KLPD?

Can you elaborate about, “Companies Corp Gov used to be dodgy” please?

This quarter it was 110% (not a typo, it was more than 100%). The demand for Ethanol and ENA is more than what current producers can produce.
The Bengal plant also wont have any issues in selling off its produce as there are hardly any Ethanol/ENA producers in the east. Moreover they will also save logistics cost, as most of the current suppliers to East India are from far away places (e.g. north, central India).

Another great gesture by the promoters. I wonder why people say corporate governance is poor! How many promoters have foregone dividends in India?

A meeting of the Board of Directors is scheduled to be held on Thursday, 10th day of March, 2022 at
to consider declaration of interim dividend for the financial year 2021-22

This is further to inform that the Board shall consider declaration for payment of interim dividend for FY 2021-22 only upon 9331173 equity shares held by public category shareholders.

The Promoters/ Promoters Group have waived/forgone his/their right to receive the dividend by him/them for financial year 2021-22 on any shares as may be held by them as on record date. The Promoters Group had also same way, waived off their right to dividend in the previous year i.e. for year 2020-21 @ Rs. 5/- per share declared at the AGM held in year 2021. Hence the dividend, if any shall be on public category shareholdings.

Yes this is second time COMPANY promoter is forgiving their Dividends Great gesture by the management.

50% of business of edible oil is pure commodity albeit having good tailwinds at present.

Whats your take on massive ethanol expansion happening all over india & there is some change in GOI policy on pricing etc? whats abt the risk from increasing CNG & EV usage slowing down the consumprion of Petrol ?
Ethanol is not fit for diesel mixing anyway.

There is far far more Ethanol demand than supply (even after considering the capacity additions).
CNG is indeed a substitute but both CNG and Petrol 4W will co-exist in India for many years to come. EV threat in 4W segment is even lesser. EV adoption will for next few year will mainly be restricted to 2/3W, followed by intra city (local) busses. Inshort petrol/ICE 4W demand for next decade is not going to stop. Moreover, if India is going to indeed become a 5/10 trillion economy, muti-fold 4W will be purchased annually compared to today. The pie will only get bigger for everyone.
Both Ethanol and Edible oils are an import substitution play. At least till this central govt is in place, I dont see any policy changes.

Ethanol story is very much known and well discussed here. I would like to get some info on their edible oil business.

How it is going to be impacted by PLI and focus on self sufficiency by government? Will it lead to higher reveneus and margins by the company?