Valuation: The stock is trading at ~11x FY17 Expected profit as compared to Finolex PE of 25x and astral PE OF >50X.

Firstly, nice catch on Peter Lynch’s approach-that is good
Following are my comments

Given the issues above and the seemingly low present valuation, I think will give this a pass until better clarity emerges on reasons for underlying improvement of sales in FY16-in a situation where all other companies struggled to show sales growth.

Valuation: The stock is trading at ~11x FY17 Expected profit as compared to Finolex PE of 25x and astral PE OF >50X.

The merger to be approved will need approval of minority shareholders (and a special resolution). This is unlikely to happen if the valuation remains at 110/share(refer scheme of merger) as versus the current market price. Hence, if the merger is approved, the Amulya valution would need to be at CMP i.e Rs 200/share. If we revise the Apollo Pipes valuation also, the resultant entity would trade at 22 P/E basis present price and hence no upside. A classic case of efficient market hypothesis. However if merger fails, there is downside risk from holding company discount, yet no upside risk.

The last slide is interesting esp this statement:

So much for ethical management and fair value

Pls go thru the last 6-yrs ARs to understand - Amulya Leasing was always a shell company mostly after acquisition by Sudesh family. I don’t know why promoters buy finance companies but some people do

It’s hilarious to see how ARs can be written for companies which don’t do any business. Am amused to see their website now.

It looks like everything is playing out to a plan created yrs back to help the dear brother.

Disc, though not reqd based on my comments: Not invested

This is one story that has intrigued me though I haven’t gotten into the details ever. The link between APL Apollo Tubes and Amulya Leasing was the one grey area I wasn’t too comfortable with when I was contemplating my investment into APL Apollo Tubes in 2014. I eventually took the plunge and went ahead because the story was just too good even after adjusting expectations for this grey area.

APL Apollo Tubes promoter family is now focusing on improving corporate governance, hence the change of auditor to Deloitte and subsequent changes in some accounting policies. My perception (based purely on business performance and the vision articulated by the management) of the promoter family is that these are very grounded, street smart people who know how to get things done. APL Apollo Tubes will end up being the darling of investors going by the business potential and the length of the runway available to them. I would be surprised if they do something silly in APL Apollo Pipes/Amulya Leasing from here on since that will reflect badly on the bigger business as well (APL Apollo is valued at 2200 Cr now and is likely to be valued at 4000+ Cr 3 years from now - of course as per my own conservative analysis)

In such scenarios where there is a large corporate action coming up, my approach has always been to sit by the sidelines till all news is out in the open and then take a call. I do not like analyzing situations where I have to cut through promoter intent behind a corporate action in addition to analyzing the worthiness of the business. I am waiting for the event to play out, will then look at this story

I plan to attend the AGM on 24th this week.Please post any questions you have regarding Amulya Leasing.Will try to get them answered.

No agreement with Apl Apollo. Just some distributors may be common and promoters are common.

Industry has 40% capacity with unorganized players. Gst will help organized.

We try to maintain prices (new capacity coming up, so we are not taking price cuts to sell that).
Realization per kg= 80 rs.

Merger- got exchange approval recently.
Now to go to Court.
Expect to do in 6-7 months.

Special thanks to @jk321 for compiling the notes.

Looks like the re-rating triggered by merger talk has largely played out at this price. It’s prudent to wait until the event actually happens and see what picture emerges.
This merger with a listed company is more like an IPO of Apollo Pipes to get the later listed. Nothing wrong with that. Avoid the hassle and costs of IPO.

This is from the 2016 AR. Annexure 1 contains the financials of the subsidiary Apollo Pipes. The account equation says Assets = Liabilities + Equity

In this subsidiary, Assets = Liabilities with no twin entry that balances the equity side. I found this odd. Sharing here to get peer views on this issue. Anyone else found this odd? 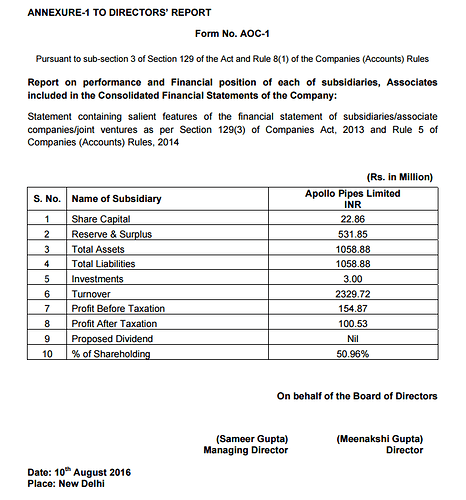 Hi All,
Posting discussion on some other thread here. Possibility of demerger in 2 months (not verified but expected) hence inviting comments from fellow members who are tracking this…pl suggest if it is it right time to enter.

I recently analysed the company and it looks like a good pick to me even at current prices.

Amulya leasing is a holding company of Apollo pipes, maker of PVC pipes based out of North India. Apollo pipes and Amulya leasing will be merged and name will be changed to Apollo Irrigation. Apollo pipe is a private company. In the merged entity, promoters will be having a 70% share. Amulya has no other business rather than being a holding company. At current price of 300, post-merger P/E would be 21.5. Talking about the industry, I see PVC pipes to be doing good in the coming years with housing, irrigation headwinds. Management is expecting 25% revenue growth and I think it is possible beacuse of the low base. Organised PVC pipes is 60% and I think it will increase rapidly.
PVC pipes are light weigh, corrosion free, long lasting, durable, no reaction with chemicals and have longer length and thus joint free.
Capacity is 48K mt/year. 500-Sales staff.
Talking about financials, margins in pipe industry are fairly constant and crude doesn’t have a big impact. Gross profit margins are 26% and Ebitda margins are 13.3%. Raw material cost is 74% which is 3% higher than Astral pipes, the leader in the market and this may be because of the price premium they would be charging. RoE and RoCE are comfotable at 22% and 20%. Working capital cycle is better than Industry leader with Inventory days and Receivable days at 35 and 52 vs 48 and 66 for Astral. One reason for this may be 70% sale to the retail segment and 30% to Institutional. On the investment side, it has 3,00,000 shares of APL Apollo tubes which at current price will fetch 50cr.
In such a small company with revenue of 240cr and M-cap of 150cr, I think one or two years time and one major capex can do wonders and help company reach entirely different orbit.
On the debt front, it is pretty comfotable with EBITDA/Interest of more than 10. Tax payout is 33% constantly thus we are safe on that front.
Taking about the management, company is a part of APL Apollo group and they have been wealth creators. Younger brother looks after the pipe business and are extremly effecient. APL apollo tubes is India’s largest steel pipes company and has shown consistent high growth.
Brand they use in pipes is APL apollo and it is very well known in the market beause of steel pipes division.
In terms of margins, Q417 was exceptional with EBITDA margn of 16.2% and raw material costs at 72%.
Taking about valuations, it is available at 21.54 P/E post merger and revenue multiple of 1.38.
Astral has a P/E of 77 and revenue multiple of 5.58.
Finolex has a P/E of 21.6 and revenue multiple of 2.67, they also have a raw material plant
Concerns -
1- It is under the GSM security list and we have to pay 100% margin even in the cash segment
2- Capacity that Finolex and Astral have. They have huge excess capacity but I think in a Industry that is set to grow at 15-20%, there is enough space and every company can make a mark for themselves. Plus, I am not worries since revenue for Amulya is still very less
3-Delay in the merger

I think market will rerate it with merger taking place and if 25% growth happens, it will be a huge wealth creator.

I am new to valuepickr and will be happy to get feedback!!

Amulya leasing continue to excellent story based on business fundamentals and merger should complete soon.

However, stock would languish near current price due to GSM rule.

any idea, when is the merger, likely to happen?

I m attaching the screen shots for the Note : 12 Non Current Investment, Year 14-15, 15-16 and 16-17. I found some discrepancy and i could not find the solution so just requesting boarders to look in to it. If holding shares then just write mail to the management for clarification as i do not hold it right now. 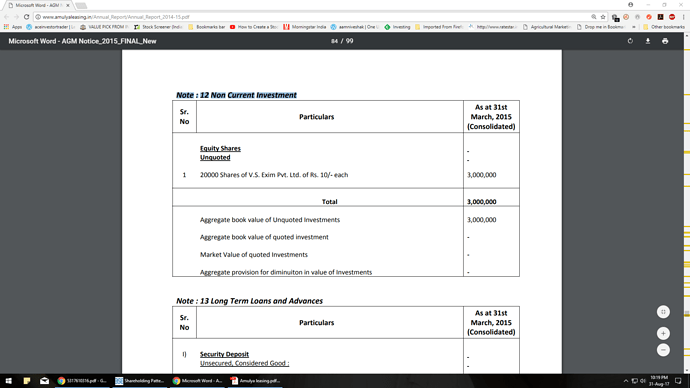 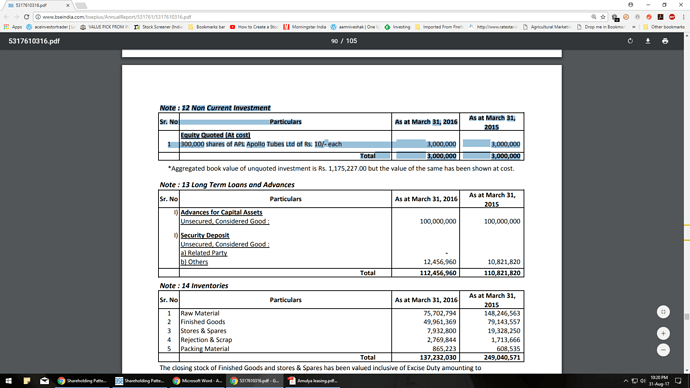 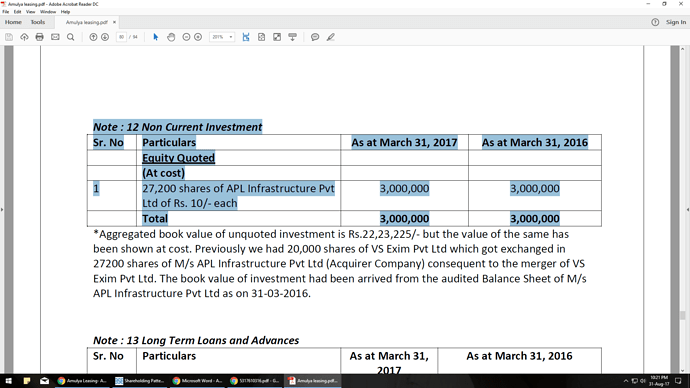 Could not the relation in terms of Value wise between APL Apollo Tube, VS Exim Pvt and APL Infrastructure Pvt ltd.
If we just consider the APL Apollo Tube as the right holding then the value will be around 47 Crore for a 140 Crore market cap company.

In such a small company with revenue of 240cr and M-cap of 150cr, I think one or two years time and one major capex can do wonders and help company reach entirely different orbit.

Can you please quote the source of your information -

Also the Market cap is not 150 Crores. On post merger basis the market cap is 300 Crores at the CMP of 272/share