Apcotex Industries is a small cap with a mcap of 750 cr. They are mainly involved in the manufacture of performance emulsion polymers which are mainly used in the automotive industry(v-belts, conveyor belts, hoses) ,the footwear industry ,and in gloves etc . The balance sheet looks healthy. The valuation is a bit rich at the moment with a PE of 32. Looking at the other numbers.

The sales though have not grown much in the last 5 years. But that could possibly change after the recent acquisition of Omnova Solutions and now they have a monopoly position in Synthetic Rubber . I think they are the only manufacturer of Nitrile Latex in India.

Now looking at the future of Synthetic rubber in India. Though India is the 4th largest producer of natural rubber , India is still deficient in Synthetic rubber production.
Synthetic rubber has a few advantages over natural rubber other than being cheaper.It has greater resistance to abrasion, wear and water, better wet grip,more resistant to oil, certain chemicals and oxygen ,resilience over a wider temperature range and better ageing.

-2.5 billion square meters of roads will have to be paved, 20 times the capacity added in the past decade -per capital income increasing and thus more demand for auto mobiles
-Growing auto mobile and Tyre industry

The promoter is the Choksey family. Atul Champaklal Choksey was earlier also a promoter of Asian Paints i think.
Top public shareholders include Vijay Kedia

Quarterly results came out on Friday and the income from operations was down to 43 cr compared to 60 cr in the prev quarter. This might have been because of the close down of Taloja plant in June for maintenance
Apcotex to shutdown Taloja rubber plant for maintenance | Business Standard News.

I have been looking into investing in Apcotex due to the management pedigree and the niche business.
But, performance in the past 1 year has been lackluster. It’s not just this quarter or the one before that - the worrying trend is long standing it seems. Your views @kk82 ?

Revenue was down around 24 % in 2016 compared to 2015. The reason given by the management was higher imports into India because of the lower Petrochemical prices in Europe…

Quoting from AR
"The major reason for reduction in Revenue is due to of adjustment of lower prices of oil and oil derivatives. Volumes were also affected due to lower petrochemical prices in Europe leading to lower exports and higher imports into India from Europe."

Also according to the management after the acquisition of Omnova, they expect 2016-17 to be a much better year. Have to see how this pans out in the next few quarters…

The management conf call is on Monday 7th November at 3 pm.
http://www.moneycontrol.com/stocks/reports/apcotex-ind-intimationconference-call-5310581.html

Saw from another thread that you guys are tracking this. Would be great if you could share your views on this.

Yes, I have been invested in Apcotex from lower levels. Last couple of quarters have been tepid and business environment has been challenging for the company due to both internal as well as external factors. However, I feel the medium/long term attractiveness of the business is because of its presence in niche where entry barriers are high. This in turn allows it to operate in virtual monopoly/duopoly in most of its segments in domestic market. Management has scaled up this business efficiently over last many years and has been expanding its size of opportunity through introduction of new products. So management has demonstrated its competence over reasonably long period.

At the same time, valuation mismatch that existed at 200 odd levels, has been largely bridged and my hunch is that market seems to have built in expectation of turnaround of Omnova acquisition in price. So the key monitor able in the story remains the margin improvement trajectory of Omnova’s business (which will become difficult to track post amalgamation). If they are able to grow the business on consolidated level at decent rate (10-15%) while improving Omnova’s margin to 12-14% as per management plan, there seems decent value on the table even from current price.

Another factor to watch out for how new management handles the dumping from Malaysian/Korean players which has led to significant market share erosion for erstwhile Omnova in nitrile rubber business.

Disl: Invested from lower levels with decent allocation in portfolio.

This is a good stock to add on corrections. Over valued at the moment. Dont know if it will ever reach there but the trendline at around 240 would be a good place to add/buy.

The traded volumes on Apcotex are generally low. Doesn’t technical analysis depend on relatively high volumes?

Not really
While volume is a major parameter in TA, the basic premise is demand and supply, past crowd behavior etc.

Why promoter are selling Atul Choksey and his wife sold 560 & 198K today? 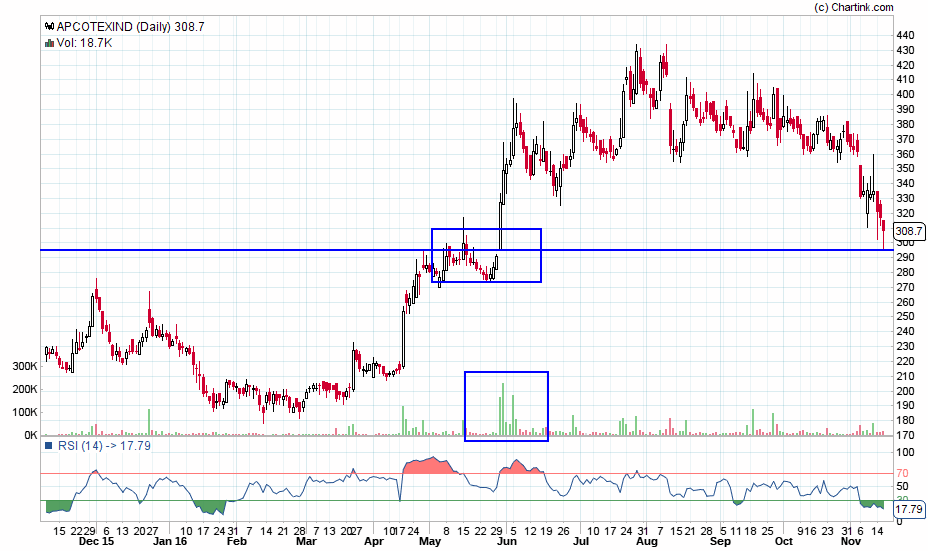 At a good support. Probable reversal?

Found this in Phillip Capital’s report on its Specialty Chemicals Conference in September.

While the Chinese government has come down harshly the polluting
chemicals industry, it is keen to provide adequate facilities for complex
chemistry R&D. Within this, its focus is towards segments that can achieve
global scale, but not on segments that require more customisation.

But this is from the Wikipedia page of Nitrile Rubber

The production process itself is not overly complex; the polymerization,
monomer recovery, and coagulation processes require some additives and
equipment, but they are typical of the production of most rubbers. The
necessary apparatus is simple and easy to obtain. For these reasons, the
substance is widely produced in poorer countries where labor is
relatively cheap. Among the highest producers of NBR are mainland China
and Taiwan.

If I’m not wrong, most of the Nitrile Rubber used in India is imported. The aim of the Omnova acquisition was to achieve Import Substitution for Nitrile Rubber. By Apcotex’s own admission (at the conference mentioned above), the Synthetic rubber’s growth will be flat while Nitrile Rubber is expected to grow 10-15% in the medium term. Will Apcotex be able to get decent margins for Nitrile Rubber?

Also, one of their major clients for Paper & Paper Board Coating - BILT is neither willing to sell its plants nor reopen them.

BATA isn’t one of their clients for High styrene butadiene rubber. Any idea who BATA buys HSB rubber from?

Anyone tracking this stock , it came out with strong set of Q1 numbers and with expansion plan in progress it should clock good growth going forward

Can we revive the thread , anyone attending their conf call. Pls share views

Have been following this counter for last 3 qtrs.

Looking for some valuable inputs from veterans in this forum.

Kerala produces 92% of India’s natural rubber and is devastated by floods. Does it have any +ve or -ve impact on Apcotex that produces synthetic rubber?