I have the same concerns. Need some more insights. What are your thoughts?

I think they will keep cash to buy RM when prices cool off bcz nmlly coy keeps inv. of 8/9/10 months but this time inv is less due to higher cotton prices. So mgmt always takes strategic decisions to run b/z as per situations. We should check how mch volume of yarn n fabrics increased over fy19/20/21 so can get sense of sales growth due to yran prices increase or due to increase in demand of their pdcts bcz they had low priced inv from last 3-4 yrs.

Looks very attractive right now.Stock is at 4.5 pe with zero debt.Will Mr Chandran’s daughter or son in law succeed him in the next five years.Also any growth projection by the company?

Apart from general market conditions, could we say that the market believes FY22 sales may not be sustainable? I wonder if FY21 sales is better to value this company.

Row material cost is increased 80% in last 1 year which will impact in margin. So all mills share is down you can check for Nahar Mills too. They do have very good profit(~500Cr) in last 1 year and company market cap is ~1200Cr.

Update based on credit rating report:

CRISIL Ratings has revised its outlook on the long-term bank facilities of Ambika Cotton Mills Limited (ACML) to ‘Positive’ from ‘Stable’ while reaffirming the rating at ‘CRISIL A+’. The short term rating has been reaffirmed at ‘CRISIL A1’.

The outlook revision reflects significant improvement in business risk profile marked by healthy revenue growth of 39% in FY22 leading to revenue of Rs.925.5 crore while margin increased from 19% to 29.5% during the same period. This improvement in business risk is backed by ACML’s strong pricing flexibility, aided by its premium positioning in the cotton yarn market, increased revenue contribution from higher margin fabric sales and its adequate captive power facilities. The margins are expected to remain at over 25 per cent given synergies from forward integration, additional of renewable power capacities and premium commanded by ACML’s products. Increase of topline and sustenance of profitability would remain key rating sensitivity factors.
Estimated net cash accruals of more than Rs.150 crore is expected to remain sufficient against no repayment obligations in FY23. Healthy cash and cash equivalents of around Rs.280 crore as on March 31, 2022 provides additional support to liquidity. Current ratio was moderate at around 5.13 times as on March 31, 2022.

Note that the current cash balance itself is about 30% of market cap! Additionally the company is expected to generate another 150 Crore during the current year based on report from Crisil above. Valuations remain compelling.
It would be interesting to understand managements plan to utilize the cash balance - they have generally been very prudent in the past and invested money into business only after understanding the long term demand trends.
I certainly think that they should deploy a part of cash to buy back shares. Looking forward to Q1 results and the AGM commentary.

This company recently showed up in my screen. Following is my initial thought process as to WHY CMP WARRANTS A DEEPER LOOK AT THE BUSINESS. It is by no means a concrete research but just a simple back of the envelope kind of calculation with tons of assumptions and pure guess work. Idea is to understand that with logical assumptions and guestimates whether the business looks interesting after providing for a large margin of safety. If it does, our job would be to verify/correct those assumptions and take up a deeper subjective analysis of the business and go through the ARs and other materials.

Ambika Cotton is a well known quality business. This time it looks even more interesting.

Market cap at CMP is roughly 1000 cr. Company has zero debt. Cash is 280cr and inventory is 229. That is net current asset of roughly 500cr. Which means we are paying 500cr for the business as things stands today.

We can not extrapolate the margins though, in fact we have to provide for large room of correction in margins because the cotton prices have increased significantly. 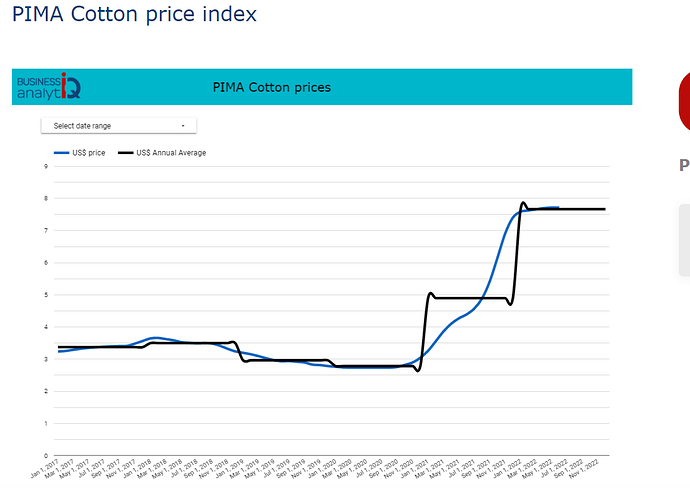 In year 2022, revenue increased from 633 to 921. Since I don’t know if revenue growth is sustainable, for this back of the envelope calculation I will assume that the revenue will be 650cr which where it has been for last 3-4 years.

Subtracting net current asset from CMP we are getting the business at valuation of 500cr so 52cr PAT would mean PE of 10 which is right at the 10 year median value!

This optimistic thesis is enough for me to initiate a deeper look at this business. I will share more notes as I go but I will really look forward to all view points and especially the anti-thesis points. It would be a huge help if those tracking this business would provide corrections in thesis above or add more color to it.

Raw material is cotton - one of the most volatile commodity
Cotton prices rose to historic high and that gave spinners bumper inventory gains but now that cycle
is reversing. So be careful. Also there were supply chain disruptions which created additional pull. These companies are best bought when out of favor. And there is a reason why they always trade at low multiple.

The interest of FII’s is slowly increasing - see the trend below:

image1714×429 38.7 KB
A significant rerating can happen when the the holding of FII’s and DII’s exceed 10% of share holding. If the performance keep improving over the next 12 months, funds will no longer be able to ignore Ambika.

AJ
Disclosure: Remain invested and added during the recent fall. 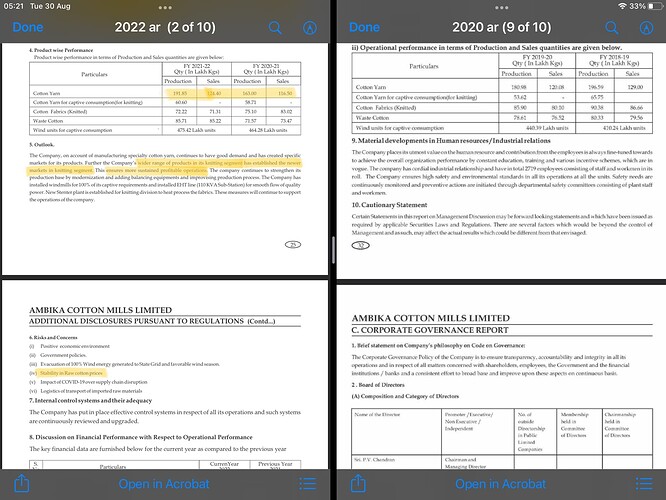 Open 2020 ar1920×1440 222 KB
I think Volumes are not increasing much. Fy 22 growth came mainly from higher prices of yarn and having low priced inventory. Also coy not doing good capex so I think future growth may be 10-12% max including price and volume mix. I think mgmt is competent and honest but not growth hungry or may be situation for b/z are such that they are not doing capex. I request to seniors pls share their views.
rahul_patel August 30, 2022, 1:20am #865 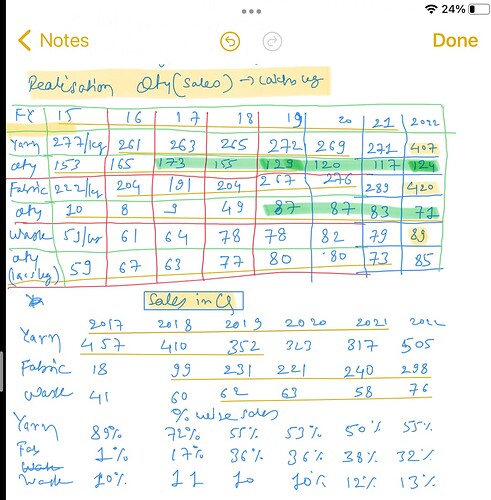 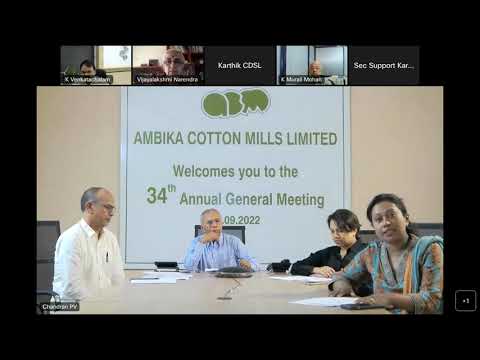 I don’t why I’m not able to find such important information from company website.

I went through the video, and Mr Chandran is a great speaker
Also he mentions that 600cr net current asset and 630cr gross fixed asset total 1250cr time 53:25-54:00
Current market cap is 885cr
If they believe it is so undervalued why are they not considering a buyback?

If they believe it is so undervalued why are they not considering a buyback?

This question has been asked in the AGM every year like clockwork for the last few years. The answer has always been we hear you, will consider this and do what is best for the company. Topline growth in the last few years has come mainly from operational efficiency, cost reduction and increase in realizations as the capacity expansion has not been done yet. The difference I heard this time around was the mention of possibility of inorganic growth with an acquisition if the opportunity at the right valuation arises which I do not believe was really called out previously.

Yes, this question was asked multiple times in past AGMs and rationale given was that the stock already suffers from lack of liquidity and that buyback would further reduce the floating stock. Any excess cash will be distributed in form of dividends. I wondered why a buyback followed by a stock split (to increase floating share, if that was a major concern) couldn’t be considered.

This time the question was why it wasn’t distributed in dividends or buyback as that would effectively reduce tax. What I understood is the cash chest gives enough protection from situations where bankers couldn’t support business with Sri Lankan vendors due to the financial turmoil there. But as per the CMD, they were never defaulted of a single payment in past 32 years, and they tried to prove the same to bankers but in vain. Still they went ahead without the support of bankers and all the payments are received on time. His point is that these things cannot be done if we do not have that amount of cash as a cushion.

He also says that when other mills were struggling due to the lack of cotton, Ambika sold the excess cotton to them and made handsome profits. If they do not have enough cash, they couldn’t hoard the cotton when prices are cheap and take advantage when prices go up with cotton being a highly volatile commodity. Expansion wouldn’t be prudent as the demand seen previously is temporary, and other mills that did the same are suffering now when demand came back to normal. The cash may be used to acquire a company if profitable.

Ultimate goal is profit is what I understood. As of now I don’t see it as a concern. The CMD with his extensive experience in the business I believe his decision is in the interest of the company’s profitability at large. But that’s just my take!

Disclosure: Invested and may be biased. Forms about 25% of my portfolio.

Coy had maximum pdcn of yarn 173 lakh kg in 2017 and fabrics 87 lakh kg in 2019/20 and in 2022 pdcn was 124 lakh kg in yarn and 71 in fabric so no need to do any capex bcz they can produce more with existing capacity. But imo growth ambition is less or may be industry dyanmics are such that the6 don’t want to expand.

I also seen in this AGM Video’s that floting share is already less in the market and 50+ % is with the promoter. And May of the long term investor don’t want to loss their position for long term so they don’t consider the buyback.

Some of my understandings of the company are -

The company DOES NOT largely time the cotton market and likes to keep all its cash parked in its RM.

However, they seem to have made a major exception in March 2022 when the cotton Prices peaked and they held much lower cotton than in march 2021 + The cotton prices were higher in 2022, so volume terms could be even lower. This is also reflected in the massive cash that they have built up on their Balance sheet. This seems to have played out very well with the subsequent crash in the cotton price for the next 9 months

For the first time in the AGM, it was hinted that the company may consider some Inorganic growth. While I still consider it extremely unlikely for a 'THANDA" company like Ambika, it seems interesting.

The daughters & son-in-law may be involved in the business but they do not seem to have a very strong executive position (eg - Deputy Managing Director). While the promoter taking a lower salary was loved by a lot of people on valuepickr earlier (also covered in Prof Bakshi’s note). The Daughters NOT taking a salary is now concerning considering Mr. Chandran is now 70+

Another understanding is - their Assets, especially Plant and Machinery seem to be “Over-depreciated” if that is the correct word / they have been maintained very well. A large chunk of their machinery seems to be a decade old and most other is even older(Net Block is much lower than what it was a decade ago).
In one of the AGMs, it was also mentioned by Mr. PV Chandran how his 20 years old machinery was working as well as new.

I wanted to get some understanding of the aging of machinery in the Textile/Yarn spinning industry, and if there is a probability that Ambika may end up being stuck with old efficient machines in the next few years.

While many investors are worried that the company isn’t doing growth CAPEX, they may have to first focus on replacement CAPEX too.

Feedback on the above comments would be appreciated.

No dude, I think you’re looking at sales numbers instead of production for 2022