It made a modest start in 1924 with a single manufacturing facility. Today, it has three manufacturing units located in Kolkata in West Bengal, Ghaziabad in U.P. and Mandideep in M.P. Its Kolkata plant is USFDA approved whereas the other two plants are WHO CMP & ISO 9002 certified. Some of its bulk drugs are also certified by the UK and the European Council.

ADL has a strong presence in various drug therapeutic classes like Immunomodulators, Vitamins & Nutritional Supplements, NSAIDs, Apetite Stimulants, Liver Protective, Anti-Ulcerants, Laxatives, Anti-Arthiritic Preparations, Muscle Relaxants and Adaptogenics among others. In the current year, it introduced new formulations in segments like anti-asthmatics, anti-ulcerants, another proton pump inhibitor and nutritional supplements. It also plans to venture into the pre-probiotic, infertility and nutraceuticals market.

With an extensive network of 1600+ stockists, ADL’s products are available all across India. It also has a presence in South East Asia, Africa, Middle East, Europe, USA and Latin America, covering approximately 35 countries.

The Company expects to achieve a turnover of Rs.400 crore in FY17. Its market cap is closer to Rs.200 crore, which is cheap when compared to other small-cap and mid-cap pharma companies which trade at a market cap:sales ratio of between 2x to 3x as against ADL’s 0.5x. It reported an EPS of Rs.15 in H1 FY16 and is trading at a P/E of 11x if we annualized the performance.

ADL has a small equity capital of Rs.5.71 crore supported by reserves of Rs.130 crore. The promoters hold 60.9% of the equity capital and the balance is held by the investing public.

the Company sold one of its brands ‘Actibile’ to Zydus Healthcare for Rs.55 crore

this is an exceptional item. yet company has added this to its CFO. is this ok or an instance of aggressive accounting?

Can someone who understand pharma throw some light on the prospects of the company and industry considering Albert David’s products? Also, I could not find capacity utilisation for their 3 plants in AR. Need to dig deeper but if someone has this information then please share.

No growth here. It is pretty old company. If company is forced to sell pieces of operating biz it is not something great unless they have a game plan to invest in high growth areas.

i have been on their Mandideep factory twice. The unit has huge scalability as well as land area but the management seems to have completely forgotten about this unit. Once a best factory in that region, it is currently running under capacity and barely breaking even. I do not follow this company but i think it has huge potential provided the mngt takes on a more agressive outlook. Else the company could stagnate hereforth.
Disclosure: My answer is based on only one of their three units.
I do have capacity utilisation and financials but not authorised to disclose.
Nor invested nor tracking.

Not a good set of numbers. Sales down due to de-stocking

If sales is down only due to destocking, it should not be an issue as it is one-time event.

Can anyone clarify on destocking. Does it mean distributors and retailers dont buy from company but company still manufactures and keep it as finished goods (or) company itself dont manufacture in order to reduce current inventory to negligible amount ?

The company might be in for better times and is worth a look now. Last quarter results were quite positive showing a PAT of 5 cr+ . They have appointed a new CEO who has worked with good companies in the past .

If anyone has more information - would love to hear

Mr. Parmar seems to have been true of his word.

Q4 delivered PBT of 13 crores and Mandideep plant has been put up for sale- mentioned in notes results.
Co is having 70 cr cash on books…and plant can fetch another 40-50 crores.
Mkt cap is 250 crs only.
Seems focus on growth from this yr onwards.

In terms of valuations, this is at 0.7 mkt cap to sales, and EV/EBITDA is unbelievably low!

It would appear that the company is going through a business restructuring process given the backdrop of the below:

I have excluded other income from calculations with assumption that if the company focuses on growth, much of the capital employed will come from the ready cash available, and hence other income would reduce (assuming that all the other income is from cash balances, which is not the case if you see breakup of OI from FY16 and 17 AR - however conservatively, they have been taken out of the calculations).

A couple of points stand out:

Views welcome. Have invested in this. 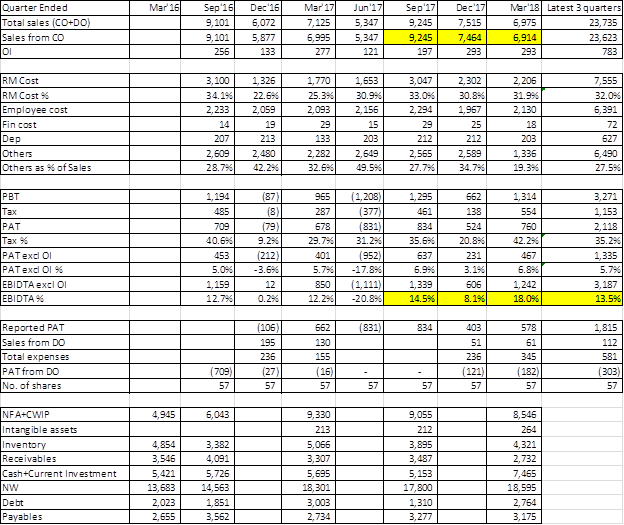 elevating him as MD&CEO in Apr 18

That’s quite good. Seems he got 100% control plus will stay for a long time as well!

He is 52 years old and comes from a professional background.

I am wondering why will the company hire such a high cost employee, if they dont want to focus on growth? And why will someone with so much professional experience join such a company if there were no potential?

He has closed loss making plant already. And was elevated to MD and CEO after a year of joining.

Another line of thought (since I am speculating anyways), is whether the family will hire high cost top guy in leadership role from market just to flog their existing assets. Maybe they are planning some expansion, maybe in the place of Mandideep facility.

Anyway, the AGM is on 3rd Sep and the FY18 AR will be out next month probably, which could provide some answers.

Good results by Albert. Highest ever quarterly sales at 94cr (excluding other income, which is low in comparison to earlier quarters). Was surprised by increase in cost of employees. hopefully that should turn out to be a positive if they continue to generate higher sales from it. Need to understand what is this other expenses bucket which comprises 30% of sales. 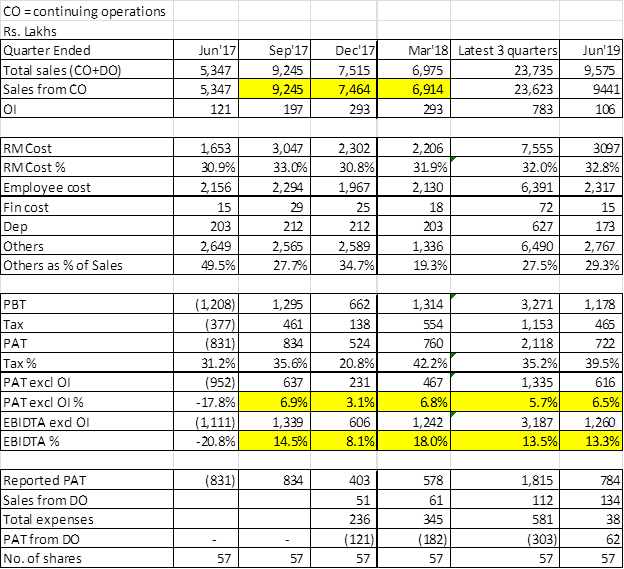 You are correct. The employee cost appears to very high even when we compare like Jenburkt, RPG Life and Unichem. Find enlcosed peer comparison for the company for your reference. While MR are critical points for the formulation company, the company need to improve productivity per Market represenative to improve operational performance. You may try to get Market representative strenght of company and calculate per MR sales to evaluare formualtors for better understanding of the company and its peer. I vaguely remember Torrent talking of achieving around Rs 10 Lakhs per MR Sales in Indian market. On Unichem, MR sales is around 6 Lakhs per annum as per enclosed article. 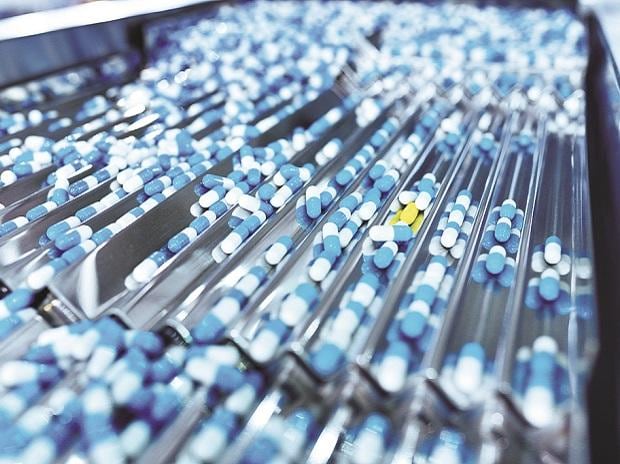 How Torrent Pharma is integrating Unichem to boost its domestic business

The Ahmedabad-based pharma company plans to launch its first product from Bio-Pharm stable this quarter in the US; Unichem MR attrition rate has halved in the hope of a turnaround

Thanks for the input Dhiraj. After closure of the Mandideep plant and giving VRS, I was expecting the employee cost to remain flat compared to earlier 3 quarters (in absolute number). However it has increased. As per the AR, the top management, especially the CEO, have got salary hikes compared to FY17. So this would have contributed to the higher salary. But, I also think that the company is investing in building its teams and probably hiring more number (and more experienced, maybe) of staff. As long as they bring in sales, the % would trend lower.

Albert David FY18 Annual Report Notes
Company did not provide much information in the Annual Report. Only highlight seems to be the new CEO Mr. Tarminder Singh Parmar who is drawing more salary than the promoters of the company. Following are the highlights from the AR.

Just to add a few points - As per the AR, they generated CFO of 30cr. They reduced inventory by 7cr and receivables by 11cr. Whether they can sustain operations at this reduced working capital level remains to be seen.

About 16cr is stuck as investment in group cos. Against which they keep taking and repaying inter corporate loan, which as on BS date was about 12cr.

One good thing is they cancelled a corporate guarantee that they had given to a bank on behalf of some group co. It was 35cr worth. No financial impact, but indicates some sort of cleaning up.

After adding about 15cr of Plant and Machinery in 2017 (14% of the gross block), they sold 33cr worth of plant and machinery for 4.9cr and generated 3.3 cr gains, because written down value of those assets was 1.6cr.

Their RnD section has some noting on some new product. It reads:
(b) Specific areas in which R&D was carried out Our work in establishing manufacturing of Miltefosine API and its drug product ‘Miltefosine Capsule’ at commercial level and for Regulatory submissions continues. Good work has been done to develop the Dossier document related information for drug substance like impurity profi ling, degradation studies, stability studies etc. This is to maintain our leadership position in providing sustainable treatment option for leishmaniasis (PKDL, ML & CL) worldwide.

As per FY17 AR, this section read as follows:
(b) Specific areas in which R&D was carried out We have moved to establish the manufacturing of Miltefosine API and its formulation from lab scale to commercial plant level to maintain our leadership in providing sustainable treatment option for leishmaniasis (PKDL, ML & CL worldwide).

It indicates that some progress seems to have happened on this front. The impact of this development on the business is not known.

I attended the AGM on 3rd Sep. Below are some notes (others who have attended, please feel free to add/amend as appropriate):

My thoughts as below, (and I may be wrong on some of them because these are my personal inferences):

Thanks @sammy11 for the AGM updates.

I went through the company AR and had a look at the company website to look at its products.

It seems that as the management maintains they have a full basket of products. What needs to be done is to market them efficiently and get better sales and profits out of same product basket.

I remember its product placentrex solution and gel which was launched many years ago and it used to be the only one company to launch the product. But of late its not available in Gujarat. Dont know the reason.

The best thing that seems to have happened to the company is induction of the new guy TS Parmar in place of a guy who was leading the co for 44 years. That could bring about some new vigour to the company. The new guy has been given a hefty salary of 1.5 crores plus which is a good sign.

They have gotten rid of loss making Mandideep facility which should help profitability going forward.

They have rid themselves of unionised MR force and inducted new MR who are not unionised. This again should help the company in its productivity.

As you mentioned shutting down their institutional sales should be a good sign as they can focus better on the more important business.

The first quarter results have been superb in terms of sales and profit growth. I would like to watch it for a couple of quarters more before deciding as the stock price has nearly doubled in a few months and might need cooling off.

The big question in my mind is the scalability of the business. Even with all these products for all these years while other companies have raced ahead, this company has remained in the same league it was in. Maybe the new CEO can create some magic. This however needs to be seen.

this company has remained in the same league it was in

Actually, this was in big league once upon a time. This was a large cap and part of sensex.
Today, it is a small cap.
Tomorrow, well let us see where Mr. Parmar takes it to!