Their parent company in the US, Abbott Nutrition private ltd sells popular products such as Pediasure (Note that these revenues don’t reflect in the Indian company as it is a 100% subsidiary of Abbott USA)

The operating profit margins show a rising trend indicating their focus on increased profitability. They are investing in assets such as real estate currently to develop the future growth drivers through branding and marketing products to consumers with high spending power. The focus seems to be in creating the brand Abbott as is reflected in the big logo which they paste on their products.

Overall, this seems to be a futuristic MNC pharma company with high growth potential. Attaching some images from the recent annual report of the company.

Key risks in my opinion include the decreasing spending power of the Indian consumer, profitability decrease for current products due to governmental norms etc.

Views & criticism from senior members & others are invited as I may be biased due to recent tracking position in my portfolio and family’s portfolio. 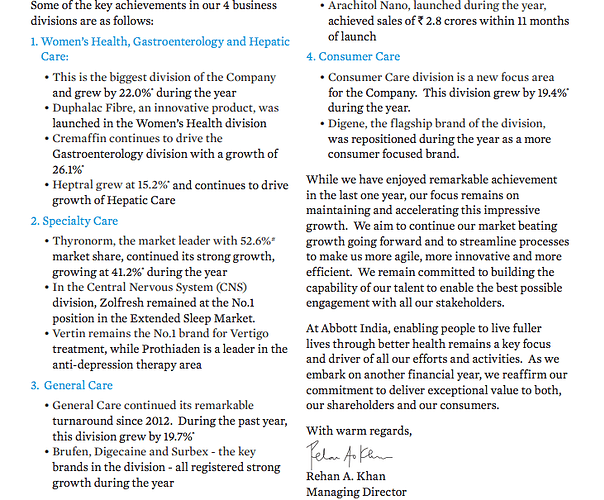 Most of the good product lines like Pediasure is getting launched thru unlisted subsidiaries.

Hi @nav_1996 Pediasure was launched way back in the year 2000. Are there any new products that they’re launching, which I am not aware of?

I don’t track this. But have they launched new products thru listed subsidary?

As is clear from the AR, they’re repositioning themselves as a consumer-focused company as of now. Digene is repositioned. Relatively insignificent launches include a blood glucose monitoring system.

Abbott India on Wednesday launched the professional version of its Flash Glucose Monitoring System, a glucose monitoring technology for diabetic patients in India.

On digging the AR more, I found out two things -
One: The company is focusing on developing awareness regarding preventive medicine as is clear from their CSR projects
Two: The risk outlined in the AR may also be a big opportunity.
Attaching two more images detailing the same points. 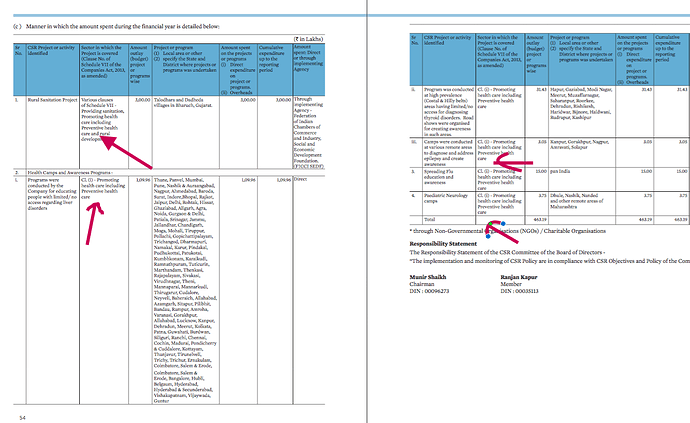 Positives
Look at the stock price of Abbott USA, shows a consistent rising trend with some slowdown in the last year. This indicates that they’re doing something right over there. Related link: http://www.bloomberg.com/news/articles/2015-11-05/meet-the-world-s-most-confident-consumers-flush-with-credit
Look at the products that they’ve launched. Ask a person who uses Pediasure… They’ll tell you that they buy it irrespective of the price.
Government spending in preventive healthcare has increased a lot in the past 2-3 years
A doctor who knows about Preventive & Social medicine says that major posts in rural government missions are being filled by PSM doctors
Connecting the dots backward indicate that they’re a consumer focused company
Nutritional product buyers love the brand they buy and are willing to pay the price
Promoters hold a major stake indicating they want control over how they invest going forward

Here's why you should be investing in high-price stock - Abbott India. #HighPricePhobia https://t.co/NS2NtZGAMz

Pediasure was launched way back in the year 2000. Are there any new products that they’re launching, which I am not aware of?

PediaSure for toddlers,
Similac for infants,
Ensure for adults,
Mama’s Best for pregnant women and lactating mothers
Glucerna for diabetics.

All under Abbot healthcare pvt ltd. Has commissioned a new plant in gujarat for india focused flavours.

Great products, great company. But not willing to share it with Indian investors.

I believe this is because of two things:

Since, you’re a senior member, I invite your views on how HUL was built & what are the similarities/difference between the strategies of both these ‘brands’

I too was looking into Abbott - Pediasure and came across this link. It claims the drink doesn’t have much nutritional value. (vs competitors.)
http://www.madhuriesingh.com/superindiankid/index.php/2012/pediasure-health-drink-supplement-is-not-for-every-one/

Digene seems to be a good product. Its widely used by doctors here in Kerala. It was prescribed along with a dose of antibiotics for me.

While online reviews of products help you to form a general opinion, I believe they’re not the best source to judge a PROFIT MAKING company. A lot of successful brands such as Dominos, Royal Enfield etc have their share of criticism on the internet but they proved to be great businesses to own in the past decade. While the concerns raised by the blogger maybe genuine, I believe interacting with actual customers would give us a better understanding of the product & company.

I can personally say that I have Thyroid problem and every time my doctor insists only on Thyronorm for it so it is indeed a well entrenched brand.

Pediasure is not part of listed entity This will impact Abbot India whose Phensedyl command ⅓ of cough syrup market in India.

I am planning to take a 5% portfolio kind of position in Abbott. Impressed by recent results. But PBV seems very high compared to rest pharma. PE and PEG is high but manageable. Also its a large mid cap company which suits my choice.

The fact that the star products are offered directly by Abbott USA is a dampener, though. If that comes under Abbott India, then its gift to shareholders

You seem to be a long time holder. Correct me if I am wrong. Can you kindly share your insights as of present Financials and Valuations and most importantly key risks. 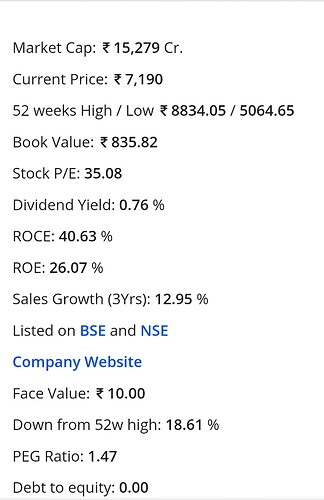 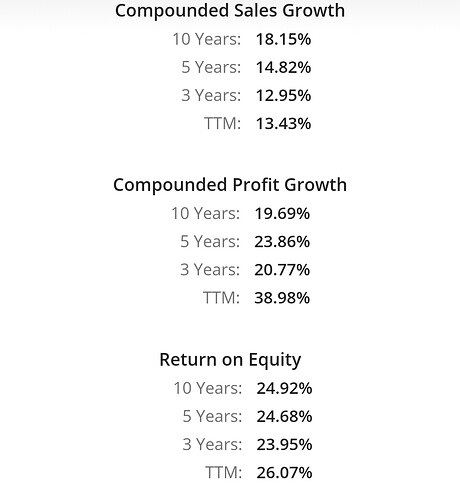 P/B is high as majority of its products are outsourced. The other MNC peers such as Sanofi, Pfizer and GSK are also trading at similar valuations.

Valuations do seem high as industry expectations are around 8-10% so even if we assume 15% growth for Abbott and a similar growth in earnings, 35x P/E does not seem on the higher side. Apart from the risk of multiple entities, regulatory risk like price controls and policy changes can be significant.

Why not buy an Abbott or a Pfizer or Glaxo? You are betting on the fact that Indians would be consuming better medicines. There are a lot of these big MNC players which could really benefit.

PediaSure for toddlers,
Similac for infants,
Ensure for adults,
Mama’s Best for pregnant women and lactating mothers
Glucerna for diabetics.

All under Abbot healthcare pvt ltd. Has commissioned a new plant in gujarat for india focused flavours.

Great products, great company. But not willing to share it with Indian investors.

Oh I used to think all these products are under Abbot India. Thats the problem with these MNCs, very difficult to understand what products they sell under Indian unit. Can you pls let us know exactly what consumer/nutrition and OTC brands come under Abott India?