I believe all resolutions by listed companies need to pass by minimum 75% voting in favor of the resolution.

In case the promoter’s hold 75% of the company, does it indicate the minority shareholders cannot oppose the resolution and get the same cancelled ?

Also, can the voting results be manipulated by the company ?

Thank you for your guidance

Section 114 of the Companies Act, 2013 defines an Ordinary and Special Resolutions.
It states:
(1) A resolution shall be an ordinary resolution if the notice required under this Act has been duly given and it is required to be passed by the votes cast, whether on a show of hands, or electronically or on a poll, as the case may be, in favour of the resolution, including the casting vote, if any, of the Chairman, by members who, being entitled so to do, vote in person, or where proxies are allowed, by proxy or by postal ballot, exceed the votes, if any, cast against the resolution by members, so entitled and voting.

Thank you. Just to understand your above points better in context of my query. For a company with promoter holding of 75% , all resolutions - ordinary or special - in 100% of resolutions, will essentially be passed if promoters want to pass the same ?

You are correct. However SEBI regulations requires all listed companies to have their promoter holding reduce to 75% or lower with in 3 years of listing.

Thanks for the earlier clarification. Can you help me understand the resolution of TBZ for salary increase of promoters ? The resolutions was passed as below :

However, the number of votes against the resolution was higher than no. of votes in favor (barring the promoter votes). This does not seems to be in line with your earlier clarification. 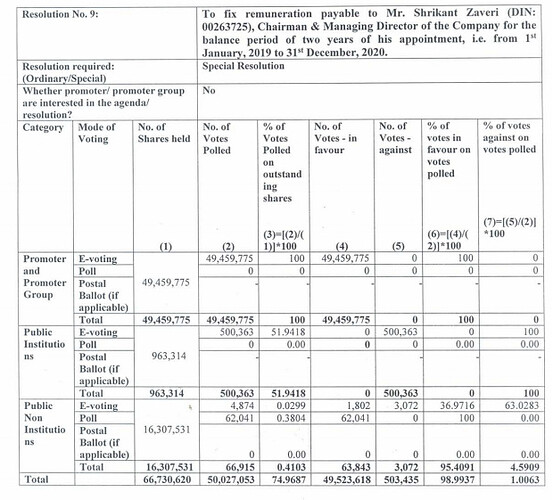 Thanks for your kind advice

Thanks for your response @sjain_13. So the regulations do require related parties not to vote on the transactions. For this particular transaction, the following parties are interested in the resolution.

I have also enclosed an article which you may find useful. As far as the voting outcome is concerned, the resolutions were approved by ~91% of minority shareholder. 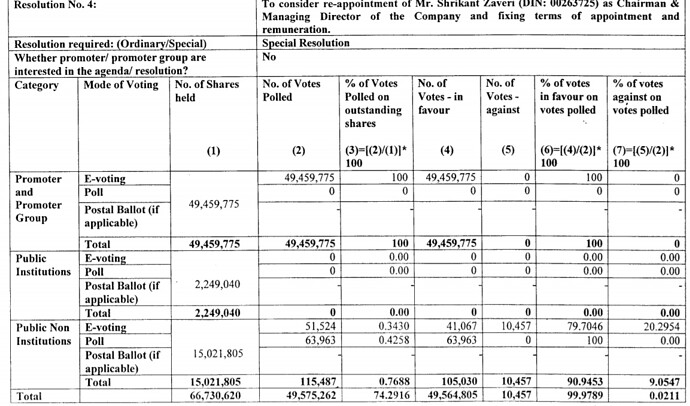 Thanks Shobhit for the feedback and the article. However, I was referring to resolution 9 (as against resolution 4 posted by you). Resolution 4 is appointment of MD (I think this is from last year).

Resolution 9 posted by me is from this year’s AGM. It can be seen that 503,435 votes were against the remuneration while only 63483 votes were in favor of resolution to increase the salary. These do not include promoter group votes. I think, this means that the resolution should not have been passed but it was not the case.

Can you please share your thoughts on this ? Thank you for your kind help

Dear Sourabh,
Thanks for your response and apologies for creating more confusion, than to provide clarity. I have sought advise from a legal professional on the matter. The simple majority of minority shareholders is required for two kind of resolutions only