Following is the Prof. Sanjay Bakshi reply on VLS in the Relaxo thread.

Many readers have responded to my blog on the Relaxo Cinderella Project. Thanks for that. On Friday 20 Sept, my friend, Ravi Purohit and I gave a talk to my students in MDI on the company. A modifi…

As always, your article has provided a great exercise in research work and a perfect start for the week, Thanks.

I have a question which I request you to answer / share your opinion on.
As a disclaimer, I would like to state the my intention for putting up this query is purely academic.

The company VLS Finance Ltd (listed), directly and through one of its 99.9% owned subsidiary holds close to 14.37% of the shares outstanding of Relaxo Footwear Ltd. This translates into a Market Value of Rs 136 – 137 Cr based on today’s closing price. Their cost of acquiring these shares was around Rs 76/- a share.
The market cap of VLS itself in Rs 41 Cr. Its balance sheet shows that it is a zero debt company and they have been in the financing and investing business since over a decade and a half (if not longer). In addition to its investment in Relaxo, it has other big and small investments like a part holding in Sunair Hotels (which owns the Niko Metropolitan Hotel in CP, New Delhi) and a profitably running Stock Broking and Merchant Banking business.

My question to you Prof is that how would you as an investor view this situation? Would you act on it? If not, what would be your reasons that would make you decide against investing in this company?

Again, I propose this question as an an academic exercise. Thank you sirs.

fundooprofessor says:
September 23, 2013 at 17:41
Ben Graham used to talk about a metaphorical “frozen corporation” whose charter prohibited it from ever paying out anything to its owners or ever being liquidated or sold. He used to ask, what’s that corporation’s shares worth to minority stockholders?

VLS is the functional equivalent of a frozen corporation. The company was underwriter to Relaxo’s IPO and the issue devolved on VLS. Lucky VLS.

It’s a frozen corporation because it does not pay a dividend and it is unlikely to be liquidated. Promoters officially own 39%, which is sufficient deterrent against a bid.

My advice? If you like Relaxo, buy it direct and not through VLS. I learnt this lesson the hard way (in other situations) and as Munger says you don’t have to pee on an electric fence to learn not to do it.

And also a recent blog by Gaurav.

http://www.gauravblog.com/?p=4173
VLS Finance @ just Rs 36 because of a colourful past !~Relax it has Relaxo Footwears!

A candid conversation ,which I had,with one of India’s top Bureaucrats based in New Delhi ,since deceased, in the 1990′s was peppered with really aggressive and loud colourful language by him when it came to the VLS Group and it’s Promoters

But Relax it ‘s Resurrecting through Relaxo Footwears !

…….but should a Minority Shareholder really Relax or should one Buy in?

VLS Finance’s Audited Consolidated Book Value is Rs 60+ as on March 31,2015 while Adjusted Book Value is Rs 180+ based on Current Valuations of the Non Current Quoted Investments of which Relaxo Footwears itself constitutes over 70% of the Value in the Quoted Holdings….assuming all such Investments have been carried over from FY 14 with more added

VLS Finance holds 45235287 Equity Shares of FV 1 => 7.54 % of the Relaxo Footwears Equity
VLS Securities( subsidiary & NSE Member) holds 4075000 Equity Shares of FV Rs 1 => 6.78% of the Relaxo Footwears Equity
Promoters ,the Dua Family, of Relaxo Footwears hold 75% of the Equity in their Company
We do not know the cost of the holding by VLS Securities but can safely assume that the Consolidated Adjusted Book Value will be much higher than computed above if the holdings of VLS Securities too are considered.This means the Haircut is much higher than 80%
Interestingly VLS Finance seems to specialise in Footwear Domain Knowledge with it’s huge investment exposure to Relaxo Footwears and it’s Clientele that includes leading Leather and Footwear Manufacturers,Mirza,Liberty & Lakhani

The intriguing observation is that VLS appears to have invested in many listed companies where it also has a Consultancy Client Relationship !

Over a Month ago, I had covered it in greater detail on the SCRIP WATCH Module of my company website when it was lower @ Rs 41 when Relaxo Footwears was @ Rs 800…check it out

Is it that the Past of VLS Finance remains a Heavy Stone to bear ?

Whatever ! ….VLS Finance may simply not be bothered by it’s Low Market Price !..…It’s making Life Changing Gains on Relaxo Footwear,albeit notional as of now….that should keep the Promoters and Top Management happy

……why bother about Minority Shareholders now when it has never done so in it’s history !

Watchout ! ……VLS Finance may just delist at these low levels to keep the goldmine gains in Relaxo Footwears within Promoters !

Is the Price being kept low deliberately for this !

What can explain such huge Market Operations Turnover of Rs 4625 crs shown as Income with corresponding Rs 4610 crs shown as Purchases in the Consolidated FY 15 P & L with just Rs 7.1 crs as PAT !...and some stock kept as Margin with Stock Brokers !..…What is the Nature of Such Market Operations and why indulge in this?

VLS Group’s Big Life Changing Value lies in the Multibagger Value of it’s Investments in Relaxo Footwears….This has not been unlocked yet and does not reflect in the Share Price of Rs 36

In simple words if VLS Finance Group had to close down today,each Shareholder would get in excess of Rs 200 at least

Keep a watch on Promoter increasing their stake through Markets…their Holding has already moved up from 43.51% on December 31,2014 to 44.86% on March 31,2015 through buying an aggregate 365309 shares through VLS Commodities & VLS Capital ……They will continue buying and VLS Finance itself may announce a Buy Back !..….all of these actions are alert indicators for a possible delisting

CONFUSION!! Appreciate if seniors could help me out.

How minority shareholders (MS) get rewarded

Since VLS does not have history of paying dividend or bonus, high probability MS won’t get anything in future as well.

Now, capital gain could be the possible reason for buying in stock but again, why stock price will rise?
Possible Reasons:

Is there any other reason which I am missing?

Note: This is just for educational purpose.

you are very very right in your observations. history has shown time and again - promoters with mindset of not sharing benefits with minority shareholders never change. So best way to play such situation is to act only when something positive fructifies.
When waiting goes for such a long time, its better to buy after the event because it is not discounted. Example is HPCL where stock is gaining after event because the same was not discounted as market was waiting for eternity.

In the case of VLS what type of positive are u expecting?

NO, I am not expecting anything and I wrote exactly the same in above post. Only if something positive comes out we should think of buying.

Here’s the logic behind not buying holding companies:
Assume that the probability of relaxo performing according to your expectations is 60% this means that there’s a 40% chance that your investment didn’t give adequate returns. So 40% is the risk or conversely you need a margin of safety to compensate for the 40% risk.
Let’s assume that there’s only a 40% chance that VLS management ‘does the right thing’ with its investment decisions (and also assume that this includes additional risks of fraud, embezzlement etc in VLS).
So what is the resultant risk of your investment in VLS? (Assume relaxo is the only holding).
Think before you answer… It’s not 40% or 60%! It’s actually over 75%! (1-.6*.4) this is the thing about probabilities, they multiply!
So essentially you now need a margin of safety for such a high risk. Not only that, the more the variables the more the chance for making an error because there are even more unknowns now.
To visualize this, think of hitting a pool ball with your white not to pocket it, but to have it hit another pool ball which you aim to pocket. If you’ve ever played pool, you’ll know that such shots are extremely hard and nearly impossible to predict. (Or in carom, hitting A to hit B to pocket B)
That is the same situation with holding companies… And generally it’s not worth taking the indirect shots.

I liked prof bakshi’s reply of frozen corporation but from last couple of days it is kind of moving. I have no experience in holding companies but liked a blog http://neerajmarathe.blogspot.in/2010/07/investing-in-holding-companies.html
here he talks about if the holding company is of promoter itself, which in vls case isn’t so.

Things are developing at VLS Finance.

Would appreciate some help in decoding this new event. It looks like the promoters have pledged 10% of their shares to IL&FS for purpose of takeover.

Disc: Not invested but looking to invest.

The moneycontrol livefeed states as follows:

40 lac equity shares have been pledged with IL&FS Trust Company in capacity as debenture trustee to secure NCD’s issued by VLS Capital.

the statement is self-explanatory and there is no question of ‘takeover’.

I understand that. I am trying to decode the effect of this action on the stock price. VLS is a deep undervaluation story but plagued with past management inaction. Deeper analysis please.

The Board of VLS has been authorised to consider exploring possibilities of diversifying into power/steel business. Are they planning to takeover some distressed company in this space ??? Is this a wise decision, to diversify into something that you have no experience of and given that the revival of the power/steel sector looks far far away ??? What could their potential takeover targets be ? Have they already made some investments in that space/company ? What is the status of the court case of their Hotel in Lutyens Delhi ? Will this development unlock shareholder value ? Many questions does anybody have the answers ???

Any investors in VLS Finance ltd?

Fellow members please send your questions - I can try to seek answers in AGM. Please also let me know if any fellow member plans to join in.

Note - Needless to mention I am an investor.
PS - AGM of relaxo footwears is also on same date and same venue (main value driver of VLS Finance).

They added 5.58 lakhs shares of STEL holdings in last 1 year… 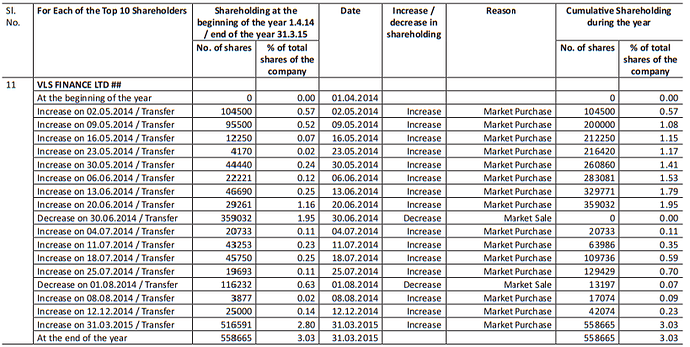 even though it added last year 5.58 lac shares then also average value for this investment come 1.5 crore to 1.75 crore.

i am also share holder of VLS finance but i cannot attend the AGM.
if you are attending AGM then pls also ask

even though it added last year 5.58 lac shares then also average value for this investment come 1.5 crore to 1.75 crore.

But question raised by Mr. Anurag Jain is remarkable

Sure. I will ask these questions. I myself need to review the annual report thoroughly for preparing my own questions.