Looks like a bonafide mistake of commission for me.

Before I discuss further, let me disclose upfront that I have reduced my allocation to less than 10% for Prabhat and intend to reduce it further to around 5%. Sold off around 80 at 20% loss to average buying price.

Will continue to hold and track it as a special situation (explained below).

Moving forward to my preliminary observations after lot of introspection yesterday night:

Using Munger’s Inversion approach, what is the worst that could happen to Prabhat Dairy’s B2C ventures if it were to fail. It could be sold off to other regional players looking to enter Maharashtra such as Hatsun which can use the Prabhat “Goodness Zone” and re-brand it as their Hatsun Daily Franchises (could apply just as well Creamline or other AP brands) 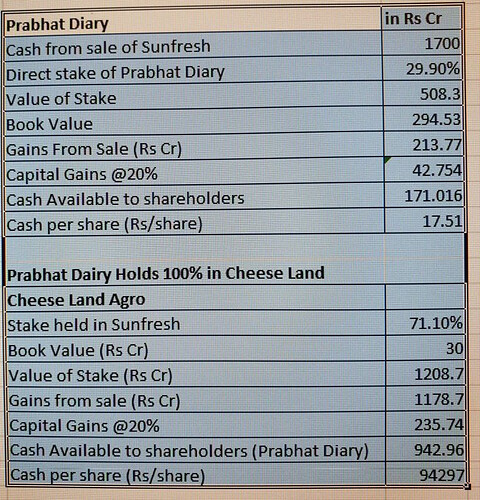 @sajeetkm
Will the shareholders of Prabhat Dairy benefit from sale of its core business. Prabhat Diary holds direct stake of 29.1% in Sunfresh rest held via Cheese Agro.

This reminds me of why it is good to start this thread. It helps me to commit to put down my mistakes and leanings from them, rather than having locked them away deep in a mind castle.

I expect I can learn more from this experience over time and can revisit or add any additional learnings which escape me currently. 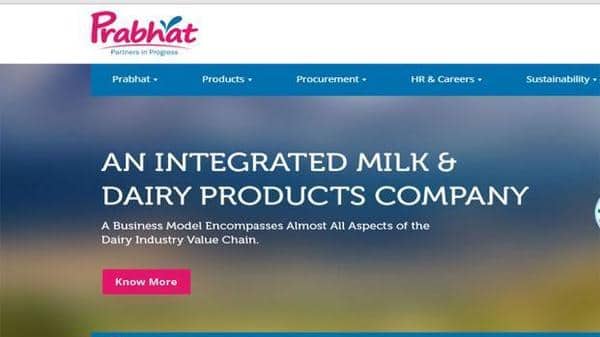 Who moved my milk: Prabhat Dairy and the ‘business disappearing’ risk

Prabhat Dairy's current market value is 55% lower than the sale consideration for its core businessIt remains to be seen if investors gang up and vote against the deal. Similar past deals have resulted in wealth erosion

The trick or the lesson i personally learned is, if one is having concentrated PF and high allocation, then sell first or get out at slight hint of doubt/discomfort, price does not matter just sell instantly, as the story/thesis changed and analyse later on side lines. If the thesis still hold good can be entered later.

Mostly it will save lot of permanent damage to the PF.

No change in my views. Levels are same as at the time of initial buy.
Would re-evaluate at end of FY19.

You can watch out for management commentary. I think they normally give an interview to one of the channels.
Would be nice to see if BSCL through EDA has started contributing to revenues.

then sell first or get out at slight hint of doubt/discomfort, price does not matter just sell instantly

I don’t think there was a question of doubt/discomfort. As I have stated above, when the investment rationale was affected by this announcement (facts had changed), I should have spent at least 10 mins to reflect on the allocation. I don’t think I would have sold it all as it would mean that I never trusted the management at all.

Nonetheless the advise is worth pondering over.

Will Prabhat have another Su-Prabhat ?

It’s funny how we take some major life decisions based on almost nothing and sometimes want every possible proof for smaller decisions. Ours is a country with very confusing faith systems. Fi…

Some math for investors who own or want to own the stock.

Of the 1700 cr cash, expect about 350-400 cr to be paid off as taxes. 1300 cr is all cash as the LIABILITIES too are being taken over by Thirumala Dairy. 1300 cr is about 133 rs of cash per shar e. Assume 33 rs is given off as dividend, at the CMP of 60 your net investment price is about 30. For a 30 rupee investment you are getting 100 rs cash in a company , that was created by the same management that people willings bought at 230 rupees a share not too long ago.

Remember with a 50% holding at a point, the promoter was worth 1200cr. Will he really damage his networth and credibility and bring it down to a mere 300 cr ? Current market cap 600 cr and falling)

My observations of above is that, it is now a question of probabilities and base rates.

How likely is that Prabhat ends up being a LEEL?
What is the base rate for this kind of acquisition considering all past slump sales including LEEL? Prabhat Dairy to merge subsidiary with itself

No new information.
Continue to play it as a special situation limiting the exposure to at max of 5% in PF.

They did announce the DLG animal nutrition deal with the intent to assuage any concerns about the future prospects a shareholder may have.
Now the move to merge the subsidiary suggests that they really want to remove any ambiguities about cash being returned so that they can get the shareholder approval.
This is important given the fact that promoter holding is around 50% with 40% of it pledged.

Let us wait and see how it unfolds.

If you or anyone near and dear have diabetes or other metabolic disorders such as hypertension, obesity, etc. this episode can be life changing.
This will be definitely worth your time.

Prabhat Dairy results are out, net profit falls qoq as well as yoy.

Slump sale to be closed by first quarter of next year. 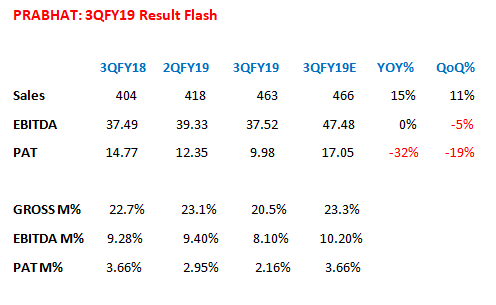 What is your expected future course of events.
Could you guide me on how I can analyse this as a special situation. Interested in learning about special situations and seeking guidance for the same.

What is your expected future course of events.

Let me layout the way I have thought about it:

Above is my simplistic understanding of the various probabilities.
Not done deep analysis of similar situations in the past.
I have already low expectations. Have mentally written of the losses.
Any positive outcome would be above expectation.

Below is a link to Joel Greenblatt’s Special Situation Class notes.
https://t.co/tyV9DpCFWF?amp=1

You can also read his book “You can be a stock market genius”.

Let me layout the way I have thought about it:

If I was the promoter of the company, I can clearly see that you will eventually sell the stock and the value will fall significantly. Hence makes no sense to give decent dividend. So LEEL like probability may be much much higher in my honest opinion.
If we learn from the past, the person who exits early may be the winner if the outcome is going to be like LEEL. The company still has liquidity and is having a 500c valuation.

You may well be right.

But on the other hand, the credibility of the promoter is at stake.
Even more so when they have tied-up with DLG. If they turn out to be not friendly to the minority shareholder, then it is not far-fetched for DLG to reconsider how they treat other stakeholders (DLG being one of them) in future.

Like I said, I have reduced my allocation to <5% in PF and even that I have mentally written it off.
Let us see how things unfold.

I have a 30% allocation to a single stock, just like you, and this event shows that I need to quickly diversify or stay in cash.

What was your rationale for choosing Prabhat over Parag Milk and Heritage?

My choices were between Hatsun and Prabhat.

Hatsun obviously was more than fair valued and did not offer the requisite margin of safety, while Prabhat was trying to replicate Hatsun’s playbook and a shareholder could track if mgmt is walking the talk or not (2020 Guidance)

I have been learning and tinkering a lot on healthy eating and intermittent fasting. My presentation on it https://t.co/SjPLVqQMY9. Thanks, @tapak7 @vishnu570 @GosaliaRishi @spranesh @saurabh_madaan and several others for educating me.

Do spare some time to watch. Nice primer on Healthy eating.

Thanks Vishnu , its a very good video on how the system works with food. Now i need more such video to further my understanding

Thanks, Satish for giving the opportunity to share my experience in the BIG meetup.

One stop shop for all the latest cutting edge research on LCHF right from the researchers themselves. You will not find a better resource than the below set of videos to get a Feynman level of understanding about nutrition and health. 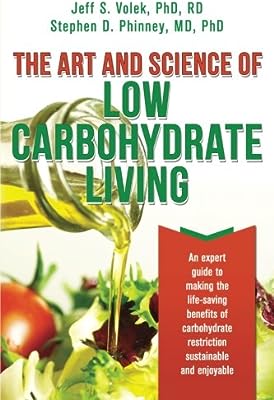 The Art and Science of Low Carbohydrate Living: An Expert Guide to Making the Life-Saving Benefits of Carbohydrate Restriction Sustainable and Enjoyable

Carbohydrate restricted diets are commonly practiced but seldom taught. As a result, doctors, dietitians, nutritionists, and nurses may have strong opinions about low carbohydrate dieting, but in many ...

Virta is the first clinically-proven treatment to safely and sustainably reverse type 2 diabetes without medications or surgery.

Another major influence during my initial days post diagnosis was the below lecture series: