How does the picture look now? Any better?

Disc - token investment in company to attend AGM, not a buy or sell recommendation, not a SEBI registered analyst

Vishnu are doing better as compared to their precarious situation earlier.

They are doing well with their Dichromate production and they have also resolved their Chrome Green production issues. After several years of closure, they are starting their Bhilai (East Central India) plant.

Concerning Barium Carbonate which is in our area of activity, some more detailed input for your understanding:

Operations: Availability of Baryte no longer an issue. They can produce upto 3000 tons per month of product.

Mr Murthy is a technocrat to the core.
His son who has joined him is an engineer by training, but currently focused on international market development.

Is anyone still follows Vishnu Chemicals?

High debt in Balance Sheet is a real concerning factor. Does anyone has any insight on why such huge borrowing? Is it for any capex / production we expansion? I can’t find any vision from management about when to reduce the debt

excellent results. The company is through with much of its expansion and debottlenecking. It has also achieved good results on the export front despite high freight rates

Really surprised at how inactive this thread is.Company has been doing very well recently and EBITDA margins have expanded all the way to 15% in Q3.Vishnu is one of the rare chemical companies that has been able to fully pass on logistic and freight costs.

The 50% higher Barium capacity will come online in Q4 and the backward integration plant has already started.In it’s Q2 call management had guided for 500 bps margin expansion post backward integration and even higher expansion,given the prevailing Soda ash prices.It is also worth noting that volumes in Q3 were hit due to heavy rainfall in southern states.Otherwise revenues would’ve been better.

Even assuming a similar 300 cr run rate in Q4,company will end the year with over a 30% growth in revenues.In their call company guided for a 20% volume growth in both chromium and barium segments for few years to come.They have plans to expand Chromium capacity to 100k from the current 70k over time.With additional Barium capacity one should see good growth in Fy23 alongwith decent margin expansion.Company has expanded it’s product basket a lot in recent years and is able to toggle well b/w better performing end user industries.

Post Q3 stock has been on a tear in an overall weak market.After some cool-off,I feel this still offers good upside potential on earnings growth alone.

Good points. Surprisingly such a big wealth creating cos thread has been totally in active.

Co seems to be walking the talk as is visible from recent results & indication given in Q2 concall.

Is the company into Commodity business with no pricing power or sp chemical with pricing power ? any competition in India & who are in abroad? Whats the moat co enjoys?

I think their biggest moat will be backward integration plant which will increase their EBITDA margins by 4 to 5%. Also this will give them pricing power.

They have 4 international competitors in chromium segment.

Vishnu Chem reported a strong set of numbers in Q4.

Margins expanded even on a qoq basis inspite of various headwinds faced by chemical cos. & many other industries.Concall highlights:

→ Chromium util at 90%,Barium at 85%. Chromium capacity to rise to 80k in Fy23 via debottlenecking.Barium now at 60k,mgt expects 40% kind of volume growth in Barium segment.

→ 120 cr. capex in FY23.90 cr of this will be towards a new import substitution opportunity: Barium Sulphate.Product is used as filler in Paint industry.India mkt size is 25 k MT and this product is completely imported.Global mkt size=130-40 k MT. Import contribution from China=70%,rest 30% is from Italy.Company sees a strong opp here since logistic costs are creating issues in imports.Expect to be as high quality as Italian imports.This capacity will be over & above the 60k barium capacity and will start contributing to topline from Q1FY24.

→ Russia was strong in Chromium segment.80k MT capacity is offline due to sanctions,etc.This has opened up a larger market for Vishnu.Growth is coming from both existing & new clients.

→ Q4 Barium segment EBITDA margins were hit since production in Q3 was delayed.So company had to honour Q3 prices in Q4 as well.From April this has normalized and expect 15-20% EBITDA here in FY23(vs. ~10% in Q4)

→ Seeing no slowdown in demand or inquiries from customers inspite of interest rate hikes,etc.Company remains confident of strong growth and industry leading RoCE.

Overall company seemed very confident of sustaining volume growth & improving margins.Debt/Equity will stay <1:1 even post capex.I don’t think there were any questions on pledging this time.

Well drafted notes indeed !
Are you aware of any domestic peer of this company?

your notes are comprehensive. do keep posting them

Sir seeing as how you were yourself a participant in the concall and asked some insightful questions,it will be great to have a more elaborate view from you on Vishnu Chem. Also given your large experience(over 3 decades) in markets your insights will be even more useful.

The company seems to be changing their credit rating agency frequently. They used to be rated by Ind – Ra in the past which was changed to CARE somewhere around 2016-17. In 2020-21 they have moved again from CARE to Infomerics Ratings. How should investors view this, and how credible is Infomerics?

The number of related party transactions seems to be higher for me. Can anyone more experienced in reading the annual reports confirm if there is something to be concerned about these transactions? 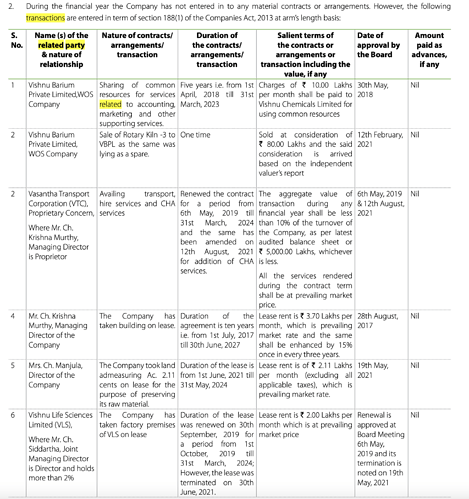 The promoters are drawing low salaries (1.3 crores combined) so I think the lease amount paid by the company to the KMP is fine. I am not sure how to interpret some of the other transactions. Eg: 3 & 8

Disc: Invested with minimum position sizing due to higher debt and promoter pledging.