I would like to initiate a thread on V2 Retail which is a micro cap discount apparel and accessories retailer catering to low income segment in tier III/IV cities. At the outset, I would like tostate that this is a high risk high reward kind of situation. However, the story seem to be turning positive in the last few months.

V2 Retail is a second attempt of RC Agarwal (RC), who had to sell out erstwhile Vishal Retail to a consortium lead by TPG via CDR. RC tried to expand too aggresively, piled up huge debt which resultedin the business going down and the eventual sell off. RC used the proceeds of the sale of Vishal Retail to start V2 retail in 2010-11 which focusses only on apparels and accessories.

Today, V2 is around 100 Cr mcap company with 16 stores spread across tier III/IV cities in Delhi, Bihar, UP, Orissa, HP and Assam. Till Fy14, V2 was into losses though the topline grew from 40 to 228 Cr from

I would like to start with the negatives first because this is where inputs from the fellow members are most needed.

Based on the auditor comments on FY14 annual report, there are 2 points which stand out:

Contingent liability of 170 Cr : Management reponse is of the opinion that the chances of these liabilities materializing on their current books is remote.

Deffered tax of 270 Cr : The company has recognized around 7 Cr in 9M Fy15. As per the note in Q3 Fy15 result, they mentioned that the remaining amount will be reversed in due cousre of business.

Also, these dues are under disputes at various forums.

Another negative is that 96% of promoters shares are pledged. I beileve this would have been a pre-condition for the CDR

As I mentioned before, it would be great to get inputs on the above inputs from the fellow folks, especially CAs.

2). As per their website (http://www.v2retail.com/about.php), company is looking to open 20-30 V2 stores by next year, which is expected to clock a combined turnover of 50-60 crore a month.

3). Based on my scuttlebutt with a store manager in Faridabad. I learnt that the stores are doing very well. He told me that the 8000 sqft store is doing 1000 Rs per sqft per month now and the target is toget 1500 in some time. He told me that the EBIDTA margins are 15%+ which is encouraging for a retailer

4). Recently, V2 has allotted warrants to Bennett Coleman (the guys who owns ET). This gives me some relief that the balance sheet issues MIGHT not be as severe as it seems. It may be wrong here.http://www.equitybulls.com/admin/news2006/news_det.asp?id=155661

5). Their plan to foray into eCommerce. They are already listing their products in eBay and Snapdeal.

-Entry into eCommerce from next month

-Ready with big warehouse of 3.5 lac sqft in Farukh Nagar, Delhi (this corroborates with the scuttlebutt I had with the Guwahati store manager). The idea is to have bulk buying at a centralized location to get cost advantage

-Hiring 50 people means this is a big initiative

Overall, this looks like a good turn around story with high risks involved. This is a bet on the guy who has done it before, failed and trying to bounce back.

Disclosure : Have been tracking it for the last 12 months and invested at average price of 30. 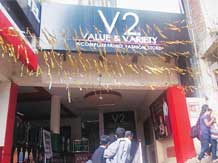 Even though the balance sheet issues remain, V2 showed turn around in Fy15. Its topline grew by 25% to 286 Cr and PAT 9.7 Cr from loss of 4.5 Cr in Fy14. So, this is a good show. I spoke to 3 store managers (Guwahati, Mahipalpur and Faridabad) and they gave very good feedback on the footfalls, sales and EBIDTA. So, it looks these numbers are real and V2 is doing good operationally.

Recently, their eCommerce site (v2kart) is up and it looks good. Few things I found interesting here are:

One positive I see is they recently raised money from Bennet Coleman (times group) and it could be partly ad for equity deal. As a result, V2 might get a good promotional support from the times group and this might not cost them a bomb in marketing cost.

Is anyone tracking this company? Comments welcome.

So, please check after some time

Someone named Sunny Porinju Veliyath entered into this stock and there is a frenzy.
Not sure if this guy is the same as Porinju who is famous for his small cap picks.

Anyways, keeping speculation aside, I did a scuttlebutt and spoke to the category head and he informed the following:

no both are different… not same

Uh oh - is it another ‘rakesh jhunjhunwala’ episode in the making

dont know about this but , this other porinju is actually a credible guy… i think he’s from ML

As per below article porinju is out of funds to buy stocks. LOL…
If he buys any thing he use to tweet about the stock.

Porinju Veliyath Has No Money Left To Buy Stocks

Porinju Veliyath has been buying stocks so aggressively that he has run out of cash. Will his bullish stance pay off and will he take home mega gains?

a la murphy’s law - that porinju veliyath is not him but another person with the same name :stuck_out_tongue

Sunny porinju veliyath looks to me as son of Porinju

he worked as research analyst in equity intelligence - porinjus company

just connecting the dots - not sure

He is indeed son of Porinju

Both are enough to put things in perceptive

What do you guys think about its website launch, V2kart.com does it started its operation or still undone ? What will be the impact ?

I have been tracking this company since it was Vishal Retail. I had invested at a price of Rs 60 because I was a novice then and had no clue to value investing. My logic was that the stock was once Rs 700, so if at all, I would lose my capital. But if I made it, I would earn a lot. My financial logic was incorrect but the intent is similar to what Monish Pabrai recommends (Heads I win, tails I don’t lose much).

Now back to the current discussion. I think the company is gradually turning around as is evident from the financials. The contingent liabilities might be a concern. The stock has now touched Rs 70. From a fundamental perspective I don’t think much has changed.

The triggers were Porinju Velliyath buying the stock (owner of Equity Intelligence) and the company launching an e-com site. He buys in his son’s and wife’s name too.

Neither triggers seem meaningful enough to me. In fact the site could even have been launched to attract e-com like valuations (GMV vs actual profits :P) . Will keep tracking this company to see if the fundamentals improve.

I also noticed that Ram Agarwal (the founder) is now very cautious in expansion. He was reckless in his Vishal Retail venture and raked up a lot of debt. In most of his interviews he speaks of keeping debt low and expansion gradual. I think this could be one quality that might help V2 Retail be different from the rest. The others might still end up burning their fingers like Vishal Retail.

Disclosure: I am still holding the stock I had purchased at Rs. 60.

V2 Retails has just come out with very good results:

The YoY profits have increased. However, what is a little worrisome are the deferred taxes of 262 crore. So it might be a while before they can clean up their balance sheet.

I’d like to hear the opinion of other boarders because I am not very accountancy savvy. Thanks.

It may be a case of glass half empty but I would prefer them growiung revenues with new stores rather than get profitable. They seem to be more profitable now than V Mart!

It may be a case of glass half empty but I would prefer them growiung revenues with new stores rather than get profitable. They seem to be more profitable now than V Mart!

@v4value
That was the mistake done by Mr.Agarwal during vishal retail time. Now he realized and concentrating more on the bottom line rather than increasing topline

MD of V2 Retail has been sentenced to three months civil imprisonment. Details below:

A managing director of a company has been awarded three months civil imprisonment by the Delhi High Court for the firm’s failure to file details of its assets in a matter pertaining to enforcement of an arbitral award.

Justice J R Midha said it was a fit case for exercise of powers
under the Code of Civil Procedure which provides for detention in civil
prison for not filing the affidavit as stipulated under the law.

“In the facts and circumstances of the case, in exercise of
power under the Code of Civil Procedure, the Managing Director of the
judgment debtor (V2 Retail) be detained in civil prison for a period of
three months,” the court said and listed the matter for compliance on
October 28.

The judge passed the order as the company had not filed the
affidavit and its managing director was also not present in court during
hearing of the execution petition filed by S S Enterprises which had
sought securing of the arbitral award in its favour by attachment and
sale of V2 Retail’s assets.

S S Enterprises’ lawyer, Vijay Kasana, also submitted before the court that the amount payable by V2 Retail was Rs 73,90,650.

He also submitted the computation of the amount which the court
noted “has been verified by the accounts officer of this court to be
correct”.

V2 Retail’s lawyer disputed the computation and submitted that the amount would be Rs 61,58,000.

The lawyer also told the court that the company would be
depositing Rs 50 lakh with the Registrar General of the high court and
therefore, the requisite affidavit was not filed.

The court, however, said it was “not satisfied” with the
explanation given by V2 Retail’s lawyer and directed him to file the
computation of amount, as claimed by the company, on affidavit within a
week.

Markets do not seem to have noticed this news. Funny, since promoter being jailed usually results in the stock nosediving.

there was also a clarification given to exchanges