BUSINESS MODEL (how does UM make money/win in the marketplace)

On a TTM basis, Usha Martin is available at ~17x PE given current market cap of Rs. 4500 Cr. Despite Covid introduced uncertainities there has been a marked improvement in performance metrics of the company in last three years.

The breakout year for Usha Marin could be FY24 with the large planned capex coming onstream by Q4 FY23, and company scaling up on opportunities in high-margin value-added segments in newer geographies like US, Russia, LatAm, and Europe.

CORPORATE GOVERNANCE SCAN
[to be completed]

RED FLAGS/FORENSIC SCAN
[to be completed]

USHA MARTIN BACKGROUNDER
Usha Martin Ltd is primarily engaged in manufacture and sale of steel wires, strands, wire ropes, cords, related accessories, etc. It is also involved in sale of other products such as wire drawing and allied machines.[1]

MAIN PRODUCTS/SEGMENTS
There are 3 segments in which company operates - Wire Ropes, LRPC and Wires.

Wire and Strands is small segment with high competitive intensity. In FY22, this segment contributed about 13% of the standalone revenue. In terms of volumes, company sold 39K MT of volumes in this segment in FY22 on consolidated basis.

There are many competitors in this segment - basically steel manufacturing forward integrating into wires. There are companies like Tata Wiron on one end and D P Wires etc. on the other end.

LRPC is second largest segment of the company and this also has moderately high competitive intensity. In FY22, this segment contributed 27% of the revenue on standalone basis. The volumes sold on consolidated basis in FY22 were 65K MT.

Most of the large steel players are also present in this segment and are expanding capacity. The company has decided to be cautious in spending capex in this segment. Capacity is being expanded to 75K MT in FY23 and further to 85K MT by FY24. No further investments are envisaged.

This is a cyclical segment with large contribution coming from Infrastructure segment (most bridges use LRPC, metro projects). In an upcycle, all the companies make very good margins (18-20%+) and these margins go down to 10% in an downcycle. To mitigate this company has included in the latest expansion 10,000 MT of plasticated LRPC which fetches higher margins.

Wire Ropes is the largest segment by revenue and profitability and the most interesting segment in the company. In FY22, wire ropes contributed 53% of the standalone revenue and majority of the revenue in overseas subsidiaries comes from wire ropes. Company sold 85K MT of wire ropes in FY22 on consolidated basis.

The company has ~5% market share in wire ropes globally. The global market has 5-6 global players and many regional players. The largest player globally is BBRG. 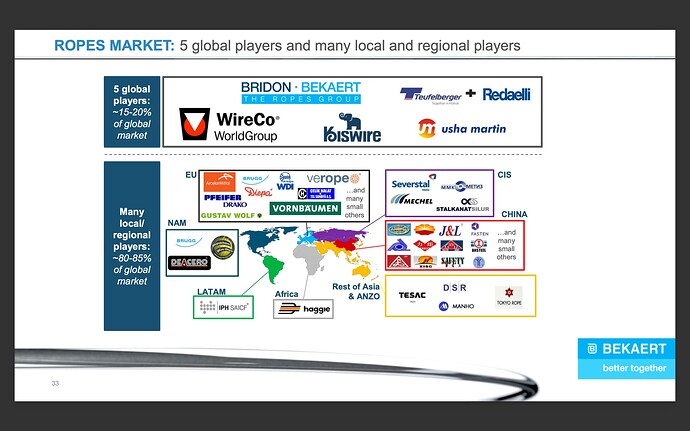 This segment is largely insulated from steel cycle and margins vary in a narrow band. The products are value added products that go into critical applications and has long approval cycle and inertia from customer side to change suppliers. 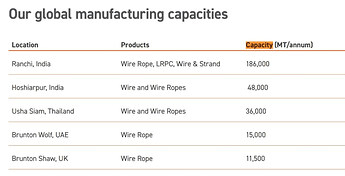 The company has manufacturing capacities of ~5500 TPM in India and with the capex it is expected to go upto 8000 TPM.

MAIN MARKETS
End industry segmentation was captured in older annual reports and it is provided below. 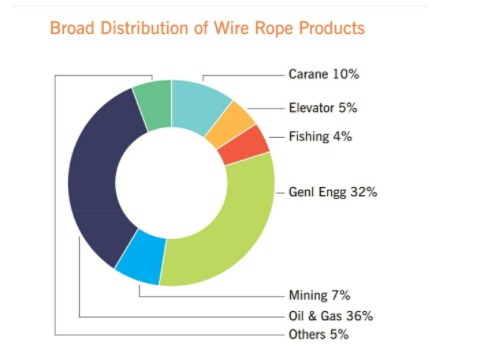 Ports segment is the highest contributor to Sales. Share of Oil & Gas segment has gone down to ~20% of sales and is expected to rise again. Fisheries, Elevators, Construction and Mining contribute ~5-7% Sales. Mining and Crane Ropes segment share should reflect increasing share given recent strong wins.

Following slide from BBRG capital markets day captures strengths and challenges of various segments as the leader does it. This provides good direction on how to think about these segments.