Any active shareholders on the forum? Quite interested in knowing the latest opinion of experienced investors on this stock.

Update - Latest investor presentation : decent results given the slowdown in capex post COVID - rev dropped by 25% but EBITDA dropped only by 7% due to cost measures. Order book at 670 Cr, which is ~1x annual revenue (which is worrisome to me)

Have a tracking position built this week, as part of my rotation from banking into Industrials.

Still accumulating this one on every dip - anyone who knows about the management and the clientele , can you please comment?
The other industrial / capex focused stocks i have been accumulating (Disa India, Kalpataru power, NCC) have been bouncing very strongly, but this one is still available for value pickers i think.

Just Studying this co. …any body has the Q2FY22 Earning Call transcripts ?

Management is progressive and efficient, and trustworthy. They have managed to keep margins intact even in a weak demand environment. The challenge has been the capex cycle, and as that turns, they should benefit.

Triveni Turbines might just have passed an inflection point.

To be sure, the numbers for the past 10 years have been nothing home to write about. Sales grew from Rs.300 crore to Rs.800 crore in 10 years, while profit growth has been tepid too.

The dispute with GE has been resolved on what looks like favorable terms for Triveni (click here). The stake held by GE & Baker Hughes has been bought back by Triveni for just Rs. 8 crores, making the 50:50 JV a 100% WOS. In addition, the company has received Rs.208 crores as settlement compensation. Triveni Turbines is now free to go to the market on its own and target the lucrative 30 – 100 MW segment. This increases the TAM for the company substantially. Icing on the cake is that in the very first quarter after this, company announced they have received 3 large orders from the export market in the 30 -100 MW.

Already, the business has a natural tailwind from the ESG waive sweeping the world. Besides thermal, steam turbines are used in all sorts of renewable energy plants such as those from biomass pellets, sugarcane bagasse, liquid biofuels like ethanol, gaseous fuels like biogas and landfill gas, solid waste processing plants and so on (but not solar). Steam turbines are also used in Waste Heat Recovery Systems (WHRS) used commonly in high energy consuming industries such as Steel, Cement, Petroleum etc.

But besides this, there are many other things I liked about Triveni Turbines.

The company has an asset light business model, despite being in the capital goods / infrastructure sector. The Gross Block which stands at Rs.352 crores stood at Rs.164 crore a decade ago, indicating minimal investment in fixed assets. Essentially, the company focuses on manufacture of a few critical IP-sensitive components and subcontracts the rest. And then, testing and final assembly is performed in-house to ensure quality of the final product.

The company works on negative working capital, as it gets advances from customers for the projects it executes. The Balance Sheet is debt free, has more than Rs.700 crore in surplus cash. It did a buyback in 2019. Margins in this business are high, as the product is tailored to customer requirements. No competitor can mass-produce a turbine on an assembly line and flood the market. In the domestic market, Triveni has a dominant market share of more than 50%.

Cash Flow from Operations have been consistently ahead of PAT for the last 3 years, understating the reported profitability of the company. P/E therefore looks elevated but actual valuation is lower. Going ahead, as the order book grows and bigger order come in (30 – 100 MW) cash flows should improve even further.

Around 25 – 30 % of the revenues come from the sale of spares, servicing and Operation & Maintenance activities. These are less volatile and more recurring in nature, they also carry higher margins. As the installed base of Triveni’s turbines grow, these revenues can only go up. They provide a recurring annuity type of cash flows for the company at very high margins.

The order flow remained consistent even during the two years of the pandemic with minimal declines. Meanwhile, the recent bump up in export orders may be a sign of times to come. 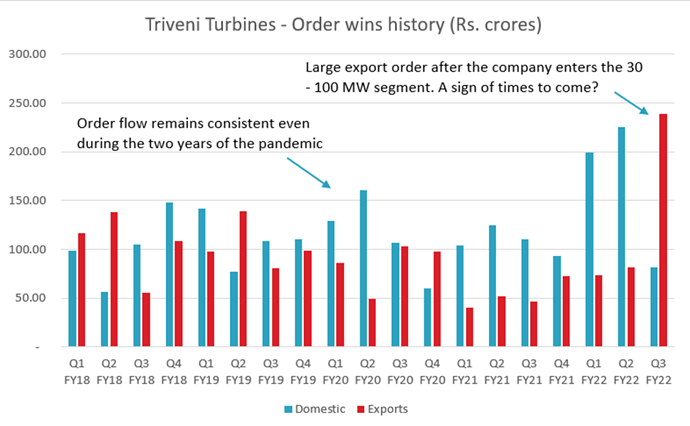 As can be seen above, less than 1/10th of the revenues came from the Percentage Completion Method. The corresponding figure for Siemens was 38% and Thermax was 59% for the financial year 2021.

Overall, there are many things going for Triveni Turbines. With the capex cycle beginning to take off, JV dispute out of the way and export markets warming up, the future may be very different from the past.

Counter points and anti-thesis is invited.

This is huge – the company signs a Rs.400 crore order in Guyana. Average quarterly order booking has been around Rs.200 crore historically. 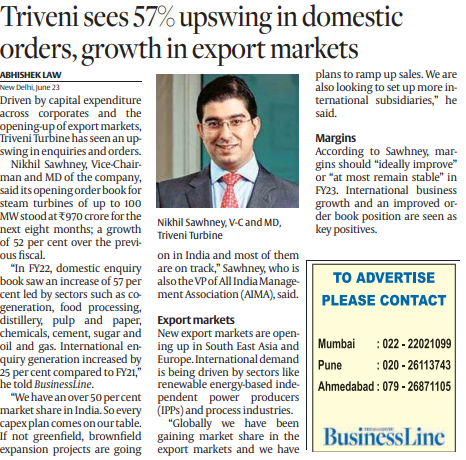 FY2021-22 was a good year for Triveni Turbines Ltd (TTL). Some pointers from the Annual Report:

The good performance has continued with strong set of numbers in Q1 FY23, with highest ever quarterly revenues of Rs.259 crores while the outstanding order book has crossed the thousand crore mark to reach Rs.1069 crore.

Disclosure: Bought today as part of trading opportunity - All time high close. However, fundamentally looks promising if Capex recovery plays a la 2003-2007, so studying further to build better position if I can get a grasp on fundamentals.

Thanks for the questions, will try to answer as best as I can.

Can you provide what could be the total market opportunity for Triveni Turbines until 100 MW?

Their Annual Report quotes from McCoy Reports which says that the global market for 5-100 MW segment has increased from 8.9 GW in 2012 to 11.7 GW in 2021, which is an annual increase of 3% over a period of 9 years. I am not sure how much this translates into in terms of dollars. This does not cover the below-5 MW segment in which the company operates, and for which I think no proper data is available. Broadly, the company says the market for large turbines (>100 MW) has declined in the past decade but that for smaller turbines is steady or growing slowly.

Any international company (either listed or not) to compare Triveni with?

In India, I understand Siemens is the main domestic competitor though not a comparable company since Siemens does many other things also. International players which operate in this segment are GE, Siemens, Mitsubishi, MAN, Baker Hughes, Solar Turbines, Ansaldo, and Elliott. Frankly, I haven’t gone to the extent of analyzing the competition to have a more detailed perspective.

As per Nikhil, the market reduced from 4750 crore to 750 crores in the last decade. While one positive is the company grew moderately despite this, however, how deep is the cyclicality of this business? Any companies with 1 billion dollar order book?

It must be highly cyclical no doubt, but I think the Ukraine war and the ensuing crisis is forcing the whole world to take a close hard look at its energy costs. This includes not only industry but also governments and municipalities. We are still in the middle of this, don’t know where it will end but hopefully the current upswing will last longer than normal economic cycles.

Renewables are a huge opportunity. It was already in an upswing as part of the broader ESG trend last two years, the company’s order book (pre-Ukraine war) was probably a reflection of that. The Ukraine war fallout will give it further impetus. This factor, is in addition to the sudden increase in TAM thanks to the GE settlement should move the company into a new orbit. That is the main investment thesis here.

I hope these answers suffice. For me also, this is the first and only investment in the capital goods / power / infra sector, so I am also trying to learn more.

Other key qualitative points are:

Capital goods is something I too never invested, so quite challenging to get a grip & build conviction. How ever, I think it is worth the time now.

On your IndiaMart AGM post, I’m in split minds on management. They come across as hardworking & decent corporate governance but some irritants remain. Probably, being new to stock markets make them jittery? I somehow did not like their minority investments strategy at all. But their presence through main business app IndiaMart is tough to ignore. With the sudden jump in quarterly subscriptions in 10000 range, I think it’s their sales team on steroids rather than genuine demand on the ground from MSMEs. In last concall for a question on what limits them to achieve 30% plus growth, if I hear correctly, Dinesh Agarwal said, “my bandwidth”! I did not like this. He should be able to recruit top talent and empower them to achieve targets rather than try to be one man show. 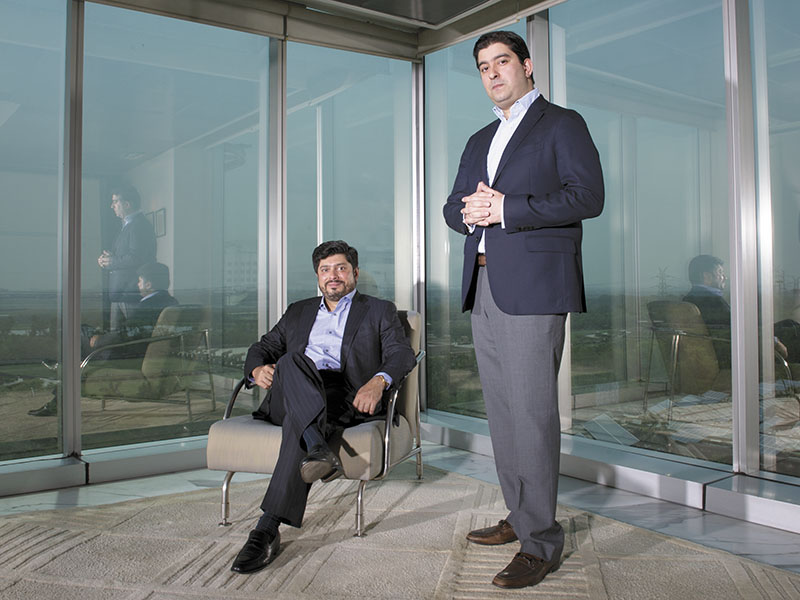 The Sawhney Brothers: Increasing Efficiencies At The Triveni Group - Forbes...

In the above interview, both the brothers gave lofty targets which were not at all achieved. Probably, we should give benefit of doubt as the external environment was not conducive? But something that needs monitoring if they are on track or not. 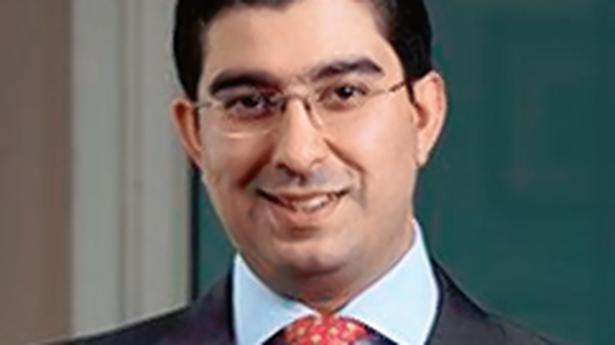