SVP Global Ventures Ltd. (“SVP”) is a diversified yarn manufacturing company, incorporated in 1982, and is listed on the Bombay Stock Exchange. SVP is a professionally managed company, led by a dynamic promoter Mr. Chirag Pittie, who has BSBA degree in Finance and Management from Boston University, USA.The Company has 3 units at Coimbatore, Palani, Madurai in Tamil Nadu for manufacturing Polyester & Cotton Blended Yarn with the Spindle Capacity of 98,000.

Growth Trigger: Recently the company has setup textile manufacturing facilities in the state of Rajasthan, at the RIICO Industrial Area in Dhanodi, District of Jhalawar. These new units will produce high quality compact yarn which are Low on hairiness, higher strength and elongation, less fiber fly, significant advantages.

Financial Projections:
The company is optimistic about the demand for the product and confident of selling increased capacity in the market. They have already registered 90% utilisation from the phase 1 of the expansion, which can be seen in the Q3FY17 results of the company. The company expect new projects to add ~800cr annual revenue with the EBITDA margins of 18-20%. Further, as company would be getting interest subsidy from the government, project is expected to boost the profitability of the company. Given below are the rough financial projections for the company: 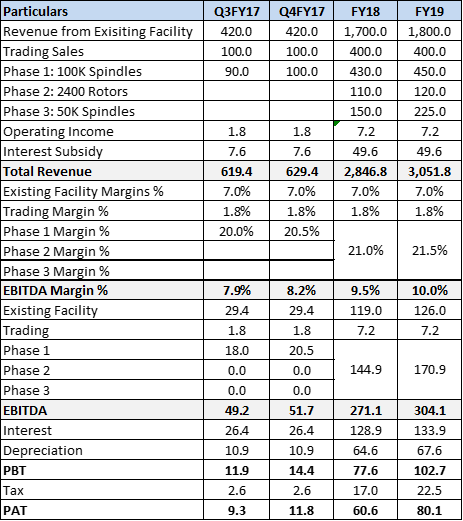 Note: Amount in the above table is in Cr.

are below revenues from existing facility sustainable? v high fluctuation every quarter on these revenue
–> 300 cr contract mfg (out of 400 cr - 100 cr is own mfg)
–> 100 cr trading

Contract manufacturing revenue can vary on a quarterly basis. However, on a yearly basis they aim to maintain the same.

Initially they were acquiring smaller companies and that was in private entity. Post that to expand they acquired the private entity into public entity at book value of Rs 103crs. Goodwill on consolidation is Rs 323crs which was introduced in FY17.

Managment on the last con call stated that new business at Jhalwar is selling at Rs 230-240. However it sold 5000 tonnes last quarter and revenue for that unit was stated at Rs 90crs. So why the mismatch?

I could only find last two years profit/loss on Screener.in. I have marked few question the image 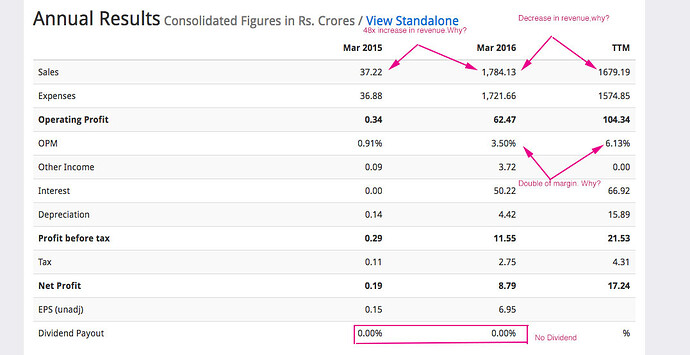 There are some apprehensions for the company… I am from Jhalawar , the place where its plant are located… I heard from my clients who directly deal with the commpany that they are using services of hotels and other service providers and not making payments to them.

Any thoughts on why SVP global’s Receivables to sales ratio for FY16 and FY17 at 29% and 33% Vs comparable peer Ambika Cotton for which the metric is around 6-7%.

That’s because svp global has not so good bargaining power with their customers and ambika cotton does have that. Also svp has different product mix as their southern units are of commodity nature and Rajasthan unit is of special yarn. So comparison between Rajasthan unit can be done but not for the mixed no’s.

I will be obliged if you can throw some light on negative news you have received.

Could you please share the negative news you have heard. Would be helpful for members here.

The company is allegedly defrauding PSU Banks and siphoning off money.

MUMBAI: A yarn-producing company took a total of Rs 700 crore as loans from a consortium of public sector banks with the intention of defrauding them .

Seems genuine to me. http://timesofoman.com/article/117828/Business/Indian-company-to-build-300m-cotton-yarn-project-in-Sohar

That means this news was Correct…

Is anyone still tracking this story. Whats the status of their Oman plant?