Sure, this is and was a known known. The glass half full version is that the cash burn for Stelis should end in a few quarters once the facilities ramp up and start delivering the existing order. And where it goes from there depends on how efficient and error / contamination free they can be in their manufacturing process. The demand for Bio-CDMO services is large enough for competition to not be a major constraint, at least in the near term.

Stelis will raise the cash that it needs from promotor warrants and other investors, so there won’t be any more burden on Strides.

Over 500cr received from Arrotex. Will be used for deleveraging. Explains the strength in the stock in this weak market. 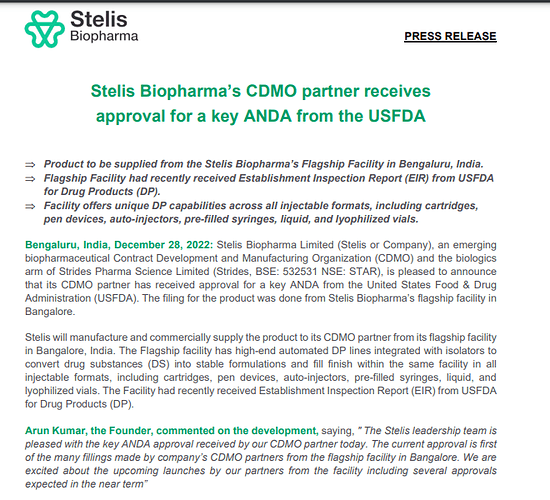 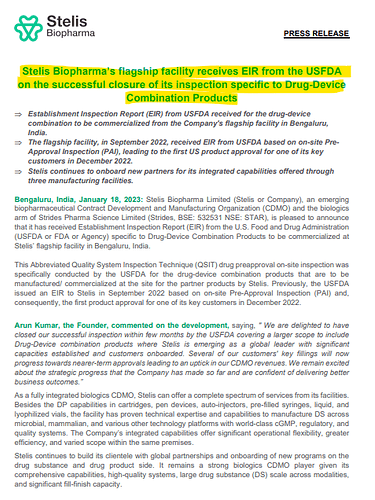 @Rafi_Syed and @Vineetjain111 - How do you see the announcement - Is it significant (on positive/negative side) or it is just a formality of already widely known fact.

“IV. Fund Requirements at Stelis
Stelis is poised to build a robust business with high margins & promising returns, delivering significant
value for the shareholders of Strides. With the pick-up in revenues and operating profits (expected to
break even in FY24), Stelis would have generated sufficient cash from operations to meet its business
and financing requirements (free cashflow generation from FY25). However, given the unprecedented
challenges in vaccine sales due to the geo-political situation and accelerated repayments of its existing
loans, Stelis is seeking to refinance its current debt of up to Rs. 7,000 million from Banks/ Financial
Institutions/ Non-Banking Financial Companies to meet its near-term obligations.
Stelis’ total debt stood at ~Rs. 11,700 million and Rs. 9,098 million, respectively, as at the end of March
31, 2022, and December 31, 2022. Post the refinancing arrangement, Stelis’ Debt Book is expected to
be at ~ Rs. 9,098 million. Strides has provided Security and/ or Corporate Guarantee for Stelis’ existing
borrowings to the extent of ~Rs. 11,800 million as at December 31, 2022. Some of the Stelis’
borrowings are also backed by Promoters’ personal guarantees.
Further, Promoters and other Investors of Stelis are committed to investing up to Rs. 6,451 million in
Stelis to meet its debt obligations. Stelis has already received Rs. 4,738 million of capital until
December 2022.
Page 8 of 22
With the refinancing proposal, while in the interim there will be hike in the security/ corporate guarantee
provided by Strides, the same is expected to get stabilized by the end of the refinancing arrangement at
~Rs. 11,000 million.
As a leading shareholder of Stelis, and a security provider/ corporate guarantor for its existing facilities,
the Company would be required to support the proposed refinancing arrangement by providing Security
and/ or Corporate Guarantee, in addition to the security Stelis and its Promoters would provide for
availing the facilities.
Since Stelis is meeting its financial obligations, and the Board believes that it will continue to do so,
the total value of the securities/ guarantees post the refinancing arrangement which can be enforced
against the Company for the borrowings of Stelis would be at ~Rs. 11,000 million.”

@manoopatil I don’t think it is significant. The corporate guarantees have been there and will be there as long as Stelis doesn’t start paying back.