The services it provides are: 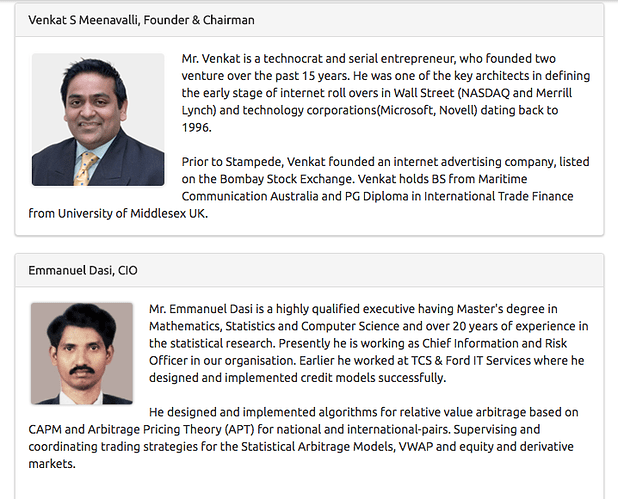 Northgate Technology was a software products company.
Software products startups’ failure rate is close to 90% .
Northgate Technology’s Globe7 Internet2 Soft phone technology crossed 2.5 million downloads at a point which may have created a surge in price. since Software products companies are more commodityish in nature I don’t take that as a big concern. In fact better tech entrepreneurs come out from experience of failed startups in past. Whereas in Finance businesses failure rates are lower. Stampede however is not a traditional finance company. It’s more towards building fintech infrastructure for trading firms.

I had looked at the company earlier. The following were some of the reasons I didnt go ahead and invest/analyse further.

Usha Meenavalli (promoter group) has been selling lakhs of shares every month since January 2016, supposedly to fund the listing of the company in Singapore.

Question is, do you believe the reason that is provided. In terms of perception, the company is in the Lycos Ltd league - so the only issue remains is whether you believe the accounts or not. There is no real evidence of hard cash being returned to shareholders, only of promoter entities selling relentlessly.

company compared itself to companies such as Citadel and Renaissance

What is the reason that you dislike it being compared with Citadel and Renaissance?
There is hardly any large asset management firms from India who have originated out of high end technology focused trading firm. In next 10-15 years I don’t see any reason why India can’t produce a company of that nature. Leaving aside HFT or any technology based trading, if you look at the broader landscape of asset management companies in india the largest ones are the AMCs of Private banks not any PMS or Prop Trading firms.
And I don’t fully agree it’s a prop trading firm, from whatever I seen on their website it is more of a technology provider for asset management firms that being a asset management firm itself.
What is surprising to me is rarely these kinds of companies list because they hardly need to raise additional capital to grow. Citadel and Renaissance are not listed. Even if you look at Indian brokers landscape I believe only motilal oswal is listed.

only of promoter entities selling relentlessly.

If it’s a prop trading firm, selling own stocks is not a concern because he would make more money trading with that cash than holding his own share. I am inquisitive about a different thing, generally these kinds of companies don’t list on exchanges as they don’t need much fund to grow.

I never said it is a prop trading firm, I just stated that the promoter is selling relentlessly with the reasoning it is for listing. This does not make sense as it is simply transfer of money from company to personal accounts.

You may make whatever inferences you see fit.

Very few companies succeed like Renaissance or Citadel. Maybe it is too much to compare against them at such an early stage.

On a different note, you may like this talk by the promoter

It’s the nature of the business, these businesses can never become huge as multiple small players can easily coexist in these businesses which according to me is a safer bet than buying a sector where the leader crushes the minos in the long run.

I generally don’t judge a book by its cover, so promoter talks are the last thing I care about. Having said that the promoter has vast experience and sounds energetic which definitely helps in leading teams more efficiently.

Venkat Meenavalli’s talk gives out very little on the company or operations. And wow, there were shlokas recitation in between, philosophical explanations etc. Strangely reminded me the fable "The Cat who went to Kashi"
But the book mentioned in the Q&A - Flash Boys gives out a lot of inner workings of Wall Street’s greed and HFT companies’ modus operandi.
Youtube gave a 2-3 links of Meenavalli’s interview for Northgate. Interesting one was where he is explaining how it went from 20 crores profit to 350 crore losses in 1 year.
Regretfully, Stampede has very little information on their operations or management commentary on their annual reports. Even where information is given, is about industry, prospects, virtu financial, renaissance, getco etc. than what Stampede does. Purposefully what they do has been kept as tech gibberish.
If it’s so high growth, not sure why they want to keep it under a public company. Especially a public company Brilliant Securities was taken over and reverse merged. Given the promoter’s knowledge on the inner workings of exchange, he did it for a reason - however holy or unholy it is.
The numerous name changes that Northgate (Proseed now) went through. I can count 6 or 7 such name changess, often including change of business lines. Again, he is a knowledgeable person who knows the inner workings of stock market & he did it for a reason, each time.
So many foreign exchanges where they are EMM are mentioned. Humongous trade volume in $. Forex outflows mentioned in Annual Reports, seems to be outrageously low. Where is the gap?
Even, if it’s argued that foreign subsidiaries retained forex, not sure how the initial investment for providing liquidity in global exchanges was generated? No traceability exists. Not much mention in annual reports either.
No break up by exchange volume available in those foreign exchanges.
No mention on the number of employees anywhere. Search elsewhere didn’t get many employees. EMM firms are known to be run with few people. So may be they have few staff. What’s surprising is there is only CS mentioned as key management personnel, outside Directors.
Doing the math on salary expenses less the stated compensation of directors, leaves very little for many employees. Leading me to conclude the salary budget for others (read high freq trading experts / technocrats) is very less. Not adding up.
If it’s such a great opportunity, why is that no one else is doing it? Even in US there is atleast 3 companies competing, as per the company itself.
Even assuming this is such a hard-to-get expertise, nothing prevents Industry players from buying a stake. Sadly no institutions (except for 1 Mauritius entity)
Principal promoter suddenly gifting almost all his stock to his wife. Ring fencing? Not sure ring fencing what, but certainly sounds fishy.
Promoter selling shares to finance a zero per cent loan to the company, in its efforts to list in foreign land. How sweet. True Altruism@Dalal street.

Numbers are definitely good but those innocent days when one believed the published numbers are long gone. Hard facts gleaned around company, promoters, their past behavior show more big red flags.

PS:
No positions
Space they claim to be in is certainly interesting. So certainly will be on watch list for sometime.

In 2012, Green Fire Agri Commodities
(GFAC)—to be renamed Proseed
India—came into existence after the
demerger of Northgate Technologies.
Northgate Technologies was demerged
into Northgate Com Tech (now
known as SpaceNet Enterprises) and
GFAC. GFAC claims to deal with agrocommodity
trading and bullion trading.
For the year ended December 2015,
GFAC generated revenue of Rs0.71
crore from its trading business, but
registered a loss of Rs5.79 crore! In
fact, after the demerger, sales have
declined and GFAC registered a loss
in each and every quarter. Strangely,
from a low of Rs0.45 on 1 April 2015,
the stock price shot up 278%, in just
over a year, to Rs1.70 on 3 May 2016.
In the two months between 15 June
2015 and 17 August 2015, the stock
price shot up a massive 491%—from
Rs0.68 to Rs4.02. But this rally was
shortlived and the stock soon declined
by over 50%, to Rs1.94 on 9 September
2015. It’s interesting to note that, in
August 2015, Kling Holdings acquired
around 38% of the promoters’ stake
from Stampede Holding. Will the
regulator investigate the strange price
movement before and after the change
of hands?  --moneylife may26th

I’ve spent 6 yrs working in technology (as a coder and then selling products to financial institutions), for the past 5 years I’ve been a capital markets professional. I’ve gone through the website and I have no issues saying that I just could not understand what it is that this company does.The products and services listed are full of tech gibberish, that’s enough reason to give me a pass by itself.

Other points I could see from a cursory glance -

It’s almost as if the firm has hired people to proof read their website and annual reports to ensure no meaningful information about what is their core business gets revealed! I see a truckload of fin tech mumbo jumbo without revealing anything about what the firm does in the first place 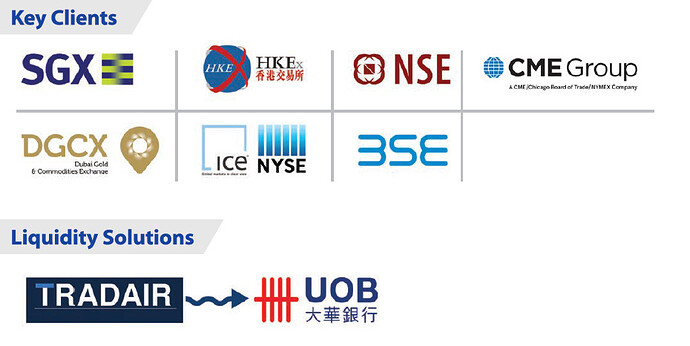 Global Peers: Virtu financial, Flow Traders, Leonteq
Virtu Financial had only “one losing trading day” over 1,238 days of trading. It disclosed this news at the time of IPO. Virtu’s Losing Day Was 1-In-1,238; Odds Say It Shouldn’t Have Happened at All - WSJ

A number of things and other pieces of information have been disclosed in Stampede’s latest AR: http://vccipl.com/Images/INE224E01028/Stamped-AR1516.pdf

To me the company looks like a cash machine and has the potential to grow really big.

Contrary to the company’s claims, I could find the company neither listed as a market maker (a firm that buys and sells stocks in high volumes and on a regular basis) in SGX or in HKEX

I was tracking this company and their actions for almost a year. To be frank, even after a year, I did not understand how exactly they make money and if their claims are true or not. The company kept posting great results quarter after quarter but stock price keeps falling inspite of that. The volumes traded are mind-boggling. To me it looks a complete manipulation .
Disc: Not invested and dont plan to invest as well

What’s happening with this company, bottomline may have shrunk, but topline grew 100% inspite all those positives the stock has been constantly falling. It is now at 80% down from top.

Because their sales are fake. Look at the rise in receivables in March 17 balance sheet.
Kanv