Skipper Ltd., (Power and Water) a moat in making?

Skipper Limited:
Market Cap: 1519.40 Crores
Current Price: 149.5
Book Value: 29.70
Stock P/E: 16.41
Dividend Yield: 0.88%
Face Value 1.00
Return on capital employed: 30.11%
Debt to equity: 1.13
Interest Coverage: 15.09
Skipper is the market leader in power and water sectors, is among the fastest growing companies in the power Transmission & Distribution area, which offers huge potential that the management is confident of exploiting. Its all-encompassing presence in the value chain from angles to tower production and fasteners to EPC enhances cost efficiency, which coupled with market leadership will lead to better returns. The company plans to scale up each of its businesses with an asset-light model, and focus on increasing tower exports. It also plans to gain a strong foothold in monopoles, EPC and PVC pipes.
Skipper has strong presence in North East India in Power T&D and have 5 plants across India ( 2 in Howrah, 1 in Assam, 1 in Telangana, 1 in Bulandhshr).
Recently company has ventured in Water Distribution (PVC) as well. Currently, 80% sales is from Power T&D and PVC has 7% share in share. Company is expecting to increase PVC share in sales to 20% on expanding the PVC pipes business.
MY VIEWS:
a) Given thrust of government to increase power and electricity across India, Power distributors like Skipper will be benefitted and Hence, increase in sales.
b) Third largest capacity of TLT towers: Skipper by April’2015 will have total capacity of 1, 75,000 TPA (up from 1, 51,000 TPA) of tower manufacturing capacity. It is the third largest capacity post KEC & Kalpataru in the domestic space. It has three manufacturing plants in the state of West Bengal and assam. Given the huge capex plans in TLT infrastructure in the country, the demand for towers are expected to grow at rapid pace and Skipper is well placed to capture the opportunity. All the three manufacturing plants are approved by PGCIL. Also it will have added cost advantage due to same.
c) The Government’s thrust on water, irrigation, river management, improving sanitation, sewerage and urbanization the PVC pipes and fittings markets is expected to grow at much higher pace then its historical 8-10% CAGR rate and reach ~391 bn in FY19. Skipper’s PVC business will also increase with recent investment in Ahmedabad for same.

PS. I am tracking the stock and do not hold any share.

Thanks for sharing this new story. I have been tracking this Company from past one week. Don’t know much about the Company but read its latest annual report.

Some of the important extracts from the Annual Report are the following: 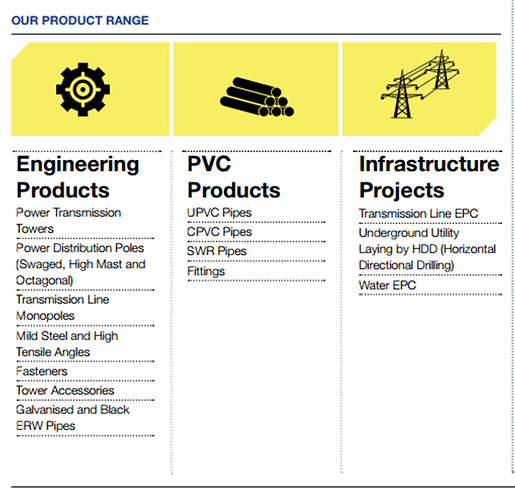 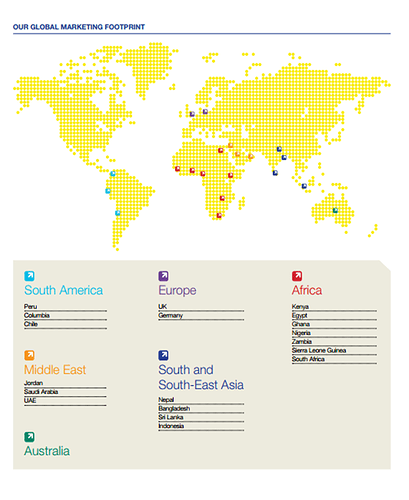 Following are some of the important links:

The Company has become the manufacturing partner of Sekisui a Japanese Company which is one of the world’s leading manufacturers of CPVC compound, for manufacturing premium quality CPVC pipes.

Secondly the Company has entered into tie up with WAVIN, a Netherland based Company, which is one of the world’s most renowned plumbing technology companies, for launching in India, the most advanced plumbing systems in the world. With these the Company is hopeful of becoming a Pan India brand in the PVC piping space in the near future.

The Annual Report seems to be of Standard Quality and carries the following vision statement:

“To be a billion dollar company by 2020 that is focused on producing industrialised, market oriented and finished products and services, with an increasing affinity to customer-centricity.”

Lets discuss this Company in detail, this might be a great story in the making which will truly unfold as time progresses.

Disc: Not invested yet but tempted.

This stock came under my radar a few days ago and started reading about it. I was about to start a thread on the same so thank you @hssodhi198 for taking this initiative.

Now coming to the company, I have a few points to add:

a) PGCIL or one of the state discoms come up with a tender for a line which is generally an EPC project. The tender is on L1 basis after come technical requirements are fulfilled. This company is new to the EPC part of the business although they have been the suppliers for a long time. So for them to expand in this space they need to get sufficient experience to participate in tenders. Some companies generally take the JV route if they are not qualified, so we need to know how is the management planning to do this.

b) The EPC business is a very slow process with many extensions and delays in payments from the discoms. This is effect the working capital of the company if they plan to expand further in this space.

Disc: I do not hold any stocks of this company. Currently tracking it closely.

Following are some key points from the latest concall July 30, 2015 (for better understanding of Skipper as Business):

I hope above points will provide some understanding of Company’s business and give base to dig more about the Company.

Thank you @Value_Investing and @ramakanth for interesting posts.
@ramakanth with below comments i am trying to answer your concerns :-
a) The sales from direct EPC projects for Skipper is just 46 Cr (>1% of total sales). (In-fact they have recently completed their first EPC project but do have few other in progress).Which only shows that Skipper is majorly supplier in T&D sector. Also there major sales is from manufacturing various engineering products (89%of total sales) which are used in T&D as well as others such as manufacturing telecom towers, LPG cylinders and Tubes. Although they are looking to expand in EPC projects in high power transmission towers (>400KV). the EPC tenders which they have to my knowledge is in high power transmission only.
b) Power Grid is the major buyer (~50% of total sales from engineering products). This is two way sword. Benefit is that they are suppliers. Companies winning Powergrid orders provides them orders for supplying various products which enhance chances of money recovery. Disadvantage is that its overly dependent on Powergrid. They are into same business from past 30 years and have good reputation which helps them getting tenders as material supplier so somewhat this disadvantage do not impact much. Also they are due to same reason have asset light model ie. do not require capex as much as companies taking EPC tenders.
c) Incomparison with KEC or Kalpatru whose major business is securing Tenders of EPC projects and delivering them. In a way both these companies model is different from Skipper.

With regards to why PVC pipes, I need to further look for the reason but on the onset, it seems to add another engineering product which is going to be in huge demand as indian economy progresses.

Your veiw points are welcome

@Value_Investing, regarding “asset-light approach”:
" Skipper is the only company in India to have complete value chain control
from angles to tower production to fasteners to EPC resulting in control of over 80% of the
cost on any tower line. The company has done backward integration through angle rolling
which is the main raw material for towers and is also horizontally integrated with
manufacturing of fasteners and accessories for towers. The location of Skipper in Eastern
India allows it access to raw material at a competitive price leading to cost competitiveness
and it enjoys ~400-500 bps of cost saving by way of economies of scale, lower freight costs
and sources its raw material, mainly billets, from SAIL"

How Value Chain Control can result into Asset Light Approach? The understanding which I have of Asset Light Model is that Company’s take lease approach for its business for several years and don’t undergo any Capex. Ex. Indigo in Aviation, Byke in Hospitality etc.

Please correct if my understanding is wrong.

Yes you are correct,company following leas based model, which is quite strategic approach.

Can you elaborate more on strategic approach of Skipper using Lease based model? What I have understood of Skipper is that majorly they are into Tower making business. What is the way in which they are using lease based model in this?

Do you already hold shares of Skipper?

If you read ar 14, http://www.skipperlimited.com/pdf/skipper_annual_report2014.pdf

you will get fair idea of the lease model

From 2014 only they started lease based model,

not yet holding, but got interested , will buy on correction

Here is the brokerage report
http://breport.myiris.com/SKPSEC/SKIPPER_20150921.pdf

Skipper’s AGM is today, if any VP member has attended the same then please share the details.

Board Meeting on October 05, 2015 | 26/09/15 19:11
Skipper Ltd has informed BSE that a meeting of the Board of Directors of the Company will be held on October 05, 2015 inter alia to consider acquisition of a PVC plant and approving Employee Stock Option Plan.

Further, the Company has informed that the trading window of the Company will be closed from September 28, 2015 to October 07, 2015 (both days inclusive).

ps: I have invested in Skipper today!

News Report on Upgradation of Skipper Rating by CARE:

Below are the ratings awarded by Credit Analysis and Research Ltd. (CARE) for local debt instruments as of September 2, 2015. COMPANY INSTRUMENT RATING AMOUNT MOVEMENT ...

Thanks for your post on Board Meeting. From the lens which I see the agenda items to be discussed in the upcoming BM are of significant importance: 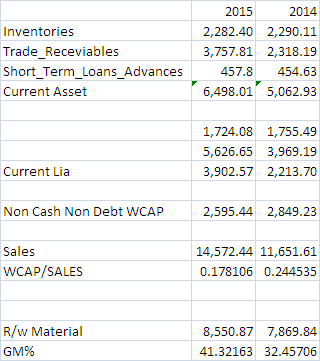 Figures are in Million

Excellent working capital management, Advance from customer increased from 26 crore 2014 to 76 crore in 2015 (this reminds of eicher from 2009/8 onwards advance from customers increasing), company getting 70% repeat customers and increase in gross margin indicates customers accepting price hike which speaks quality product and after sale services.

Can you please let me know from where you have drawn the following conclusions: