Should CWIP be included in calculating ROA?

I have a very basic question that i am unable to resolve in my head. Many companies have CWIP as an item in the balance sheet. CWIP refers to the amount spent on a capital asset which hasn’t been completed yet or more importantly the asset doesn’t have any earning power until it gets completed. When calculating ROA should we include or exclude CWIP from the assets? If we include it then we arent really measuring the true earning power of the operating assets because CWIP will not start generating money until its completed. So I am leaning towards excluding it when calculating ROA. I am asking for the views of the experts on the forum because the excluding and incuding CWIP changes the ROA dramatically. Please guide me!

Without bothering about what’s the textbook way to do it i would say we go by common sense of doing it. Exclude.
Happy to learn , if include is the right answer and why?

Return on Asset or for that matter any ratio is not required to be reported
by company either under Indian GAAP or US GAAP. So all ratios we calculate
for internal use whether its bank or individual. This is to justify the
point there is no GAAP instruction for calculating ROA.

That leaves us to objective interpretation than jurisprudence. ROA is a KPI
to calculate earnings power of assets. Which is return divided by total
assets. Some people defines return as Net profit after tax, some before tax
etc. Total assets meaning all tangible and intangible, for some its
tangible only as intangible assets without cost can be discretionary to
capitalise.

All ratios are either for a comparative or against a benchmark. If you are
taking CWIP then do it for all your companies under consideration. The idea
is to level the base.

Capitalisation for tangible asset under GAAP is “put to use”, in some case
straight forward bill date , in some cases management judgment and external
evidence is necessary. So saying accounting capitalisation commences with
earning power is bit open for debate e.g. contract accounting. Despite the
work being completed unless certified it appears under CWIP. There is no
GAAP to say you can not recognise revenue on assets which are under CWIP.

More importantly all the data base and tools calculate ROA basis PL Net and
Balance Sheet Total number. If you want to split , it’s a lot of work…not
for one company but many.

This is from the HUL report 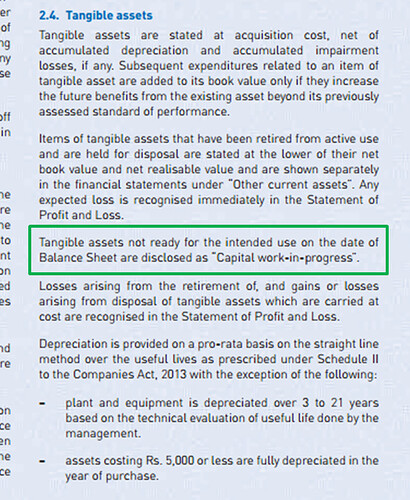 from the mahanagar gas report

from the eicher motors report

Return on asset is the earnings generated (profit after tax) against
resources used that is total assets. Total assets included not only fixed
asset but working capital, intangible asset etc.

If you exclude CWIP which constitutes cost incurred in terms of material,
labour and over heads. One leg i.e. cost of PL is stripped and included
under CWIP. To that extent profit is increased for the period.

Second leg is liability; the accounts payable against these costs still
appears under working capital. If you can separate creditors for Capex and
trade creditors while calculating it will make sense. I think its disclosed
under sundry creditor for others (bit outdated accountant here!)

Or else total asset would be understated to the extent of creditors for
capital goods/ capex for calculating ROA.

If go logically, asset which is ready to be considered for utilization for returns should be considered , now whether it is being utilized or lying in bank is a different matter.so, I would exclude .Usually, when CWIP undergoes completion n demand side is good , leads to bump up in revenues ,so, why to make it inconsistent