I searched and although Shivalik was a great wealth generator, the company doesnt seem to be discussed here. I wish to put some figures for consideration from what looks like a good value play. I have taken a small tracking quantity.

Shivalik is undergoing an expansion
For the purpose of expansion they issued preferential shares of 44 lakhs at the price of Rs.326 each which brought in a capital of Rs.143 crore

If you set aside the new money raised as I assume that money is still not put to use to generate profits as yet, the remainder market cap of Shivalik is 227 crore

Shivalik as per annual report also owns 39% of Medicamen Biotech.
Medicamen is valued at 599 cr.
39% of 599 crore is 233.6 crore
Usually holding companies are traded at a discount of 30pc the assumption being if they were to sell their investments and distribute the capital it will attract a tax of roughly 30pc. So if Shivalik was only holding Medicamen and nothing else, the market cap would be roughly 163.5 crore

Deducting 163.5 crore from the 227 crore we got earlier, for the current business the market cap is 63.5 crore (Their expansion is 185 crore as you would see below but lets deduct just the new capital for now and 70% of medicamen)

Medicamen risk
Major calculations above include the value of Medicamen. If this is inflated then eventually Medicamen market cap would come down so its essential to look at Medicamen a bit to understand if we are dealing with highly inflated market cap.

Missionpharma supplies generic pharmaceuticals, medical devices, medical kits and hospital equipment to countries outside the EU – primarily in Africa and Asia. Customers include ministries of health, central medical stores and public procurement agencies as well as NGOs, funders and private wholesalers. The
products are both sold in bulk and kits. Missionpharma is not a manufacturer itself whereas all products are sourced globally from manufacturers.

So looking at the “possible” value of Medicamen future sales it’s good idea to check what MissionPharma’s cost of goods/material is. As Medicamen is likely to get a slice of that pie. Missionpharma material purchases for resale in 2017 as per their annual report - converted to today’s exchange rate - is in the region of INR 440 crore.
Medicamen sales is 118 crore, profit of 10 crore, pe of 57. Lets say normal pe for generics business is 20 like Cadila. So back of envelop calculation, market is expecting medicamen to have revenue of around 350cr as below 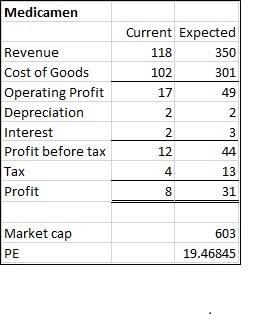 Its unlikely Medicamen will be able to procure a big part of MissionPharma’s yearly requirement of 440crore however they do have the capacity as per their 2016 annual report so depreciation is likely to remain at current level and because of MissionPharma being on board probably new generic drugs development is targeted at higher margin products. MissionPharma is growing as well and as part of a listed company they would have growth plans. I am not sure how Medicamen fits into it but I assume with board, shareholding, etc they have plans to use the underutilised Medicamen plant

Shivalik Expansion
Looking at the expansion, Shivalik initially took an approval (board,shareholders, environment,etc) for expanding their existing products. The expansion of existing products was in the region of roughly 5 times their current capacity

Live date for expansion
They have received all approvals for the change of plan with an expected production commencement date of December 2019.

shivalik/medicamen intergroup sales
Medicamen cost of raw material is around 59pc. Lets say Shivalik fulfils roughly half of it. So Shivalik is looking to generate a revenue of 150 crore, which is roughly 3 times current revenue. Their last expansion plans for their old products was 5 times capacity. So 3 times probably sounds very conservative. They also said the raw materials currently have to be imported from China and their new plant is state of art which would make them more competitive. So on the expansion capital of 143 crore they will most likely make 14 crore (150 crore / 44.82 * (5.79 - 0.73) x .70 after taxes
14 crore over 143 crore is an excellent return of 10pc per annum or a pe of 10

The expansion so far has been without debt other than recently raised more capital. Their annual report says their proposed investment for new plant is shown as 185 lakhs. I am assuming this is due to oversight. No one will talk a lot on an investment of 1.85crore. They probably mean 185 crore which ties in with the recent capital raised. 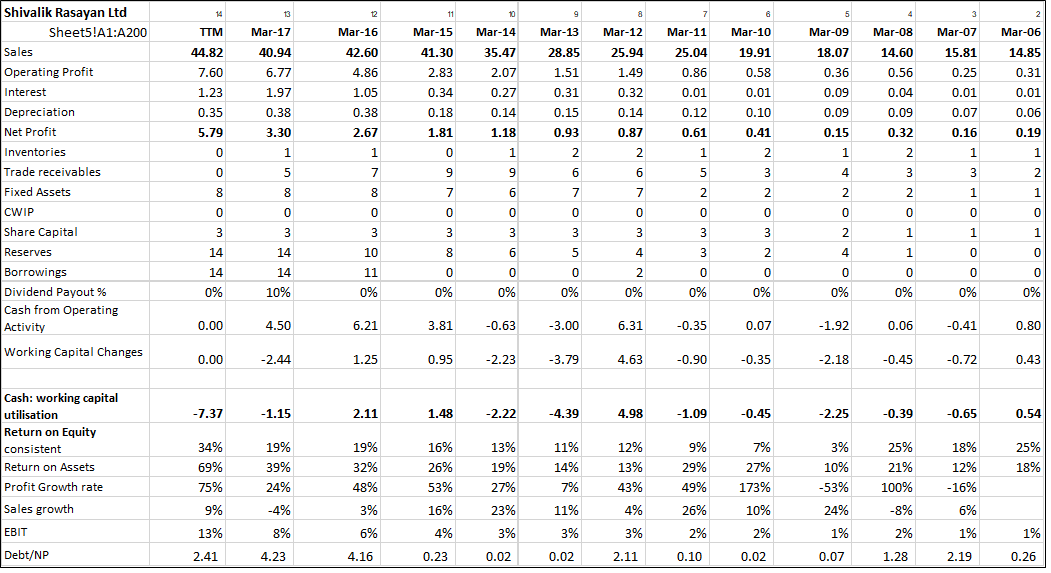 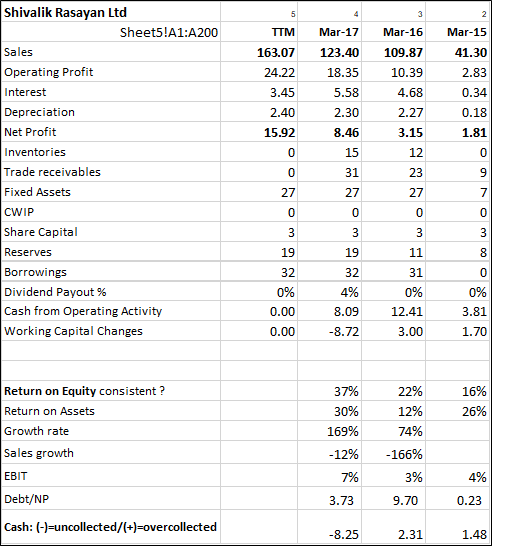 Thank you for creating the thread. Actually the 44lakh share is yet to come and is not included in present market cap of Shivalik Rasayana. Further Medicamen bio is also expanding and they are doing oncology plant which will be operational from next year. The revenue of medicamen is expected to increase. For the expansion Medicamen bio has realised fund by issuing preferential allotment viz: 306000 shares at 543 and 324000 at 618 for promoters and public which is above the current market price. The revenue of 150 crore looks small( yes in initial years of operations we can expect lesser revenue) less when compared to the investment of Rs.185 crore.

Disc: I am invested

You are right, I was confused due to shares in issue last year and this year - I think due to bonus and share split.

So it doesnt look like a great buy at this moment

Have been invested in this since July’16 and it has already been a 5 bagger for me in just 2 years. Although I started with a miniscule amount with tracking quantity, kept on adding as the consistent performance strengthened my conviction.
Recently visited their Dehradun plant. Although couldn’t meet anyone from the management since it wasn’t a planned trip but based on the interaction with the staff I got to know that the plant had been running at 100% capacity utilization operational 7 days a week.

capex is relatively huge 185 cr - 4x revenues. But is there info on management’s estimate of capacity creation for the oncology API which they propose to produce from end of 2019 (apparently there is no analyst meet-transcripts or press release)? Also do we know the name of the oncology API? These details will help in realistic estimate of incremental growth.

Yes its huge. It has potential to generate 5 times current revenue and most of it has a ready customer

The way I look at cash flow+ capex usually is (operating cash flow + investing cash flow)/Revenue. If the company is not growing we should get atleast 5%. Shivalik over3 years that it has acquired other companies has grown so this ratio for period of standalone when it has not grown is great measurement of efficiency

There is a filing with Gujarat pollution board that gives more details on the exact oncology API. I’ll try to post it later.

I’m planning to attend the AGM this friday. Please let me know if there are any questions you’d like to get clarification on by the management. I’ll try my best to put those forward during the meeting.

Thanks. I have some please -
How much percentage of production of the new plant is expected to be used within group
What is their expectation of capacity utilisation on new plant over next 3 years
At full capacity at current market rates what is the revenue they would expect from the new plant
What are margins at current market rate
Who will be their biggest competitors in India and overseas for the new plant
Their medicamen holding last year was 42pc and now it’s 39pc, why did they reduce

I think the stake reduction on Medicamen was due to the capital raising that they did through preference issue they did for medicamen.

I was going through financial statements of both shivalik and medicamen. As I understand approx 40% of Medicamen is held by Shivalik. What I see is Shivalik’s standalone+medicamen’s standalone=Shivalik consolidated; this is true for eg: in P&L - revenue and eps etc. follows this; This lloks like overstatement; For all practical purpose, (eventhough the stake is controlling in nature), shouldn’t it be shivalik standalone+40% of medicamen standalone = shivalik consolidated? Am I missing something here?

I think medicamen is an associate (and not a subsidiary) under accounting GAAP rules hence from what I know, 40% of Medicamen profit (not revenue) will be shown in Shivalik as other income

In both cases (associate or subsidiary) intercompany revenue that is not realised has to be removed from consolidated. For example if Shivalik sells Rs120 worth of goods to Medicamen out of which Shivalik’s cost is 100 and profit is 20 and Medicamen still has those goods in inventory, wip or part of finished product and have not subsequently sold off, then, from the group profit, 20 has to be withheld to be shown whenever Medicamen downstream transaction completes

As of now there is no intercompany revenue. The present business of Shivalik is Agrochemicals. The API plant is yet to come and the inter company revenue may start after their new API plant starts commercial operations.

Thanks for clarification. I had gone through till 2018 March results; to me it looks an over representation when you add 100% of Medicamen’s rev and earnings to Shivalik’s accounts when in fact you don’t own 100% of it; consolidated statements doesn’t look like minority interests have been reduced; further i could find arithmetic errors as well in their 2016-17 financial statements - though the impact isn’t huge, it makes me wonder not to take the stated nos. at face value

@srvn
Refer to my post
Medicamen is an associate besides Shivalik is following IAS.
I am aware auditors sometimes overlook, accounts receivable or inventory which inflates profits as was done with shilpi but this is only because they are lazy or take management word at face value. This relying on management will not cost them their practising license

Because Medicamen is an associate, accounting rules (developed with lot of discussion papers borrowed from IFRS rules) require a certain treatment to these figures.

Your post says so - which we appreciate your research into. So why not present the figures of where you found the anomalies. If you are correct it will save us all from the mistake of investing here

Nevertheless thank you for looking into it briefly. I would be very appreciative if you present your findings in a manner we all can arrive at the same conclusion from it as you have

Ref post: disc:1) no holding;2) not an accounting expert ( its likely that I may be wrong here; looking here to better understand the nos.) 3) as always base your inv. decision on multiple factors not just one

as per annual reports

as per AR 17-18, medicamen is their associate comp where they have mgmt control; no other subsidiaries,associate companies are listed;