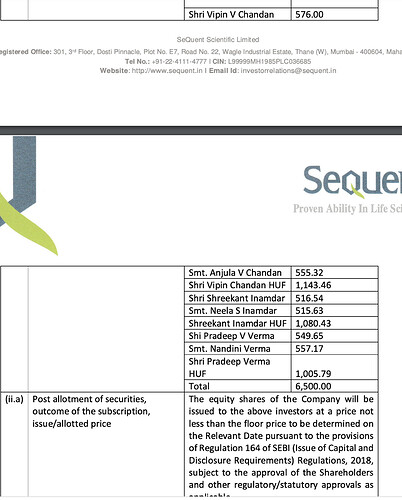 It is interesting to see what price they are allocated ?

Sequent API business is key profit driver, looks like there are having difficulties in sales. Forget price hike, they are struggling to API sale.

I wonder why they keep acquiring formulations business which do not make money.

The business trades at an EV/Sales of 2x(mkt cap 2600+ 400debt) while the acquisition they made was for 200 crores for a biz that does sales of 80 odd crores which works out to around 2.5x (assuming no leverage).

So they paid a higher multiple for a biz that they acquired? Maybe cause Tineta Pharma has higher unit economics. The acquisition hardly adds anything to the topline but maybe pitched as a base to build the india formulation business. Need to understand what is the strategy the company wants to buiild.

Looking at the Q2 result, the new CEO/CFO seems to following a kitchen sink approach: Reporting losses when they join in clearing up the book and past doing of earlier management. There is a trace of this happening. On the other hand, they would be indicated positive second half, which they did. Management hinted at a slightly better second half, which does not sound very optimistic picture of the future.

In the Q1 call, just a few months back, management said they would recoup all the API sales lost due to fire, but months after the call, the second quarter came much worst. Sequent had 65% of revenue coming from the regulated market, and most of them have a contractual provision to pass on RM prices, and this is likely to happen from Q1 onwards.
They would report better profitability just by passing the RM cost for API. Considering this is a regulated market, this could have been significant. But looking at the management commentary, this looks like a pipe dream, as they have yet to hint at significant improvements in Q4/Q1.

High inflation across the world is impacting farmers’ life. As a result, Sequent cannot pass on higher RM prices in the formulation business. Despite that, they are buying companies in different Geographies. I find it weird that all this formulation business combined is not able to make money if one sees over the last 4 to 8 quarters. Agree; they are making investments for VMF in the US market, but it is small, and the business has little pricing power.

Turkey is another tragedy IMO. Due to currency depreciation, earlier management said that the business is doing locally, and the currency depreciation is making products manufactured within Turkey very competitive in Europe. We have not seen any traces of it yet, and neither the new management mentioned anything about it in Q2. So it seems earlier management was misguiding, or that was just a mirage, and they said for the sake of saying it. I hope this was not the case, but looking at the last 3/4 quarters’ results, it is increasingly looking like the case for me.

The new India acquisition is funded by preferential allotment for 65 crores. I am keen to see what price new shares are allocated as it will set the new benchmark. If the allotment price is above CMP, then it will be positive for the stock in the short term. However, any discount to the price or allotment of shares around 86, the price at which Carlye bought, will not augur well for the stock. I think the business is nowhere near as sound as I thought it to be, and it is made worst by ESOP costs, which are constant irrespective of the business performance.

Note: Invested and rubbing my nose.

Even on last year earning, Sequent is at 45 PE.

Is sequent a very high quality, high growth business that market and investors have given it a huge valuation of 45 PE?

Can experts on sequent please throw some light on the valuations at cmp?

It could be simply a case of earnings collapsing in last few quarters which makes it appear optically expensive on the P/E front.

Disclaimer: I am not tracking it now, too many changes happened at the company and it also faced multiple headwinds, hence thought it would be wise to get out and re-evaluate it at a later date.

It could be simply a case of earnings collapsing in last few quarters which makes it appear optically expensive on the P/E front.

After earnings collapse, PE is at 180.

45 PE is the valuation before the earning collapse happened.
Why does sequent deserve such high valuations?

My apologies, in that case I am out of depth on this one.
Have you checked on the stock holding pattern and available free float? There are many stocks that remain on expensive valuation irrespective of business fundamentals because stockholding is concentrated and available free float is very low. This is the only other point I can think of at this time.

Public shareholding is 37%. Float is very good. not low.

Since the Margins of the company are and were so low, even the PE based on last year earnings looks pricy. Therefore, looking at multiple valuation metrics such as price to sales , ev/ebitda, ev/cfo ,etc can be more helpful in better understanding the business valuations.

The price sale from high of 5.5 is now at around 1.5 which is lower than its median. So the valuation so seem to have adjusted to business.

Price to sales went high for a brief period of time- similar to Zoom, Paytm, Netflix, Moderna etc- doesn’t mean that’s the valuations it would get.

Need to compare EV/EBITDA, PE, EV/CFO with other pharma companies listed on NSE and BSE.

Since the Margins of the company are and were so low, even the PE based on last year earnings looks pricy. Therefore, looking at multiple valuation metrics such as price to sales , ev/ebitda, ev/cfo ,etc can be more helpful in better understanding the business valuations.

Hence, it is trading 2.5 times more expensive than these small-mid pharma/API cos.

Is the management quality much better than other companies, and growth much higher, that market is giving such high valuations?