And now the CFO resigns. The sequence of events are highly suspicious when all top management moves out.
Is this some kind of move by the PE to replace the management?

Replacing higher management with their own management is not exceptional in merger and takeover. The new managements wants their people at the key positions.

However, CEO resignation earlier and now CFO resignation in quick succession does not auger well in the short term.

Whenever the top guy leaves, especially a long tenure CEO, expect others in the senior leadership team to leave. This may not be the last, we could expect more. This is quite common in companies which are not promoter driven and very common in the US/Europe

Whether it is good or bad for the company, is a different point and remains to be seen

Fire accident reported a week ago at one of the API manufacturing facilities. 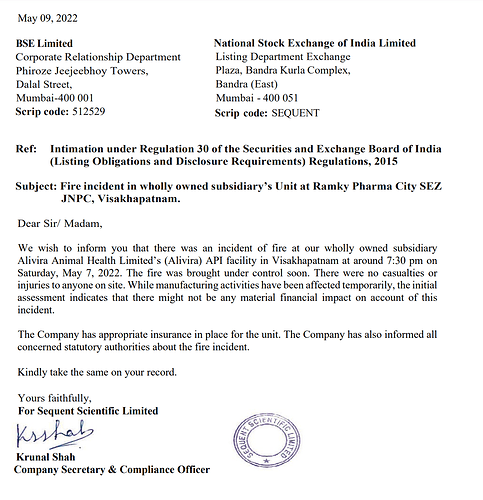 With these numbers, Sequent’s valuation deserves to be even lower IMO.
I was left flabbergasted by how much my understanding was wrong about this business.
Management clearly indicated that it is out & out generic business (LFL commodity) , the ability to pass price rates even partially is a struggle.
Was all that Branded generic stuff just an illusion. But how can they have 40% gross margins entirely due to commodities. But operating and net profit margins of 8% do confirm the same.

Disc: Invested since 210 levels. Not regretting but I did commit a mistake buying it at the mcap/sales I had entered here.

Update: after Q4FY22 concall, I truly am regretting and will definitely be learning from this. Hopefully, I will be able to avoid failures like this in future. Doesn’t deserve > 1.2 ~ 1.4 market cap times sales.
It’s a small portfolio quantity so not something I will lose sleep over but capital preservation is my first and most basic principle, hence the regret.
Currently have no choice but to basically sit back and trust the new mgmt to bring us back to top of circle numbers, steadily it maybe and slowly build conviction on the business based on them walking the talk. Re-acheiving Fy21 numbers is not a possibility at least in medium term.
Above are personal views. Your own due diligence is appreciated.

stock has bottomed out market has all ready discounted it, what ever worst can happen it happened with this stock, only Latam & India part played will, Turkey is in worst shape, Germany approval is pending , API is not working currently even human API is worst performing not for other co’s, But one thing is good that they have established S&D network through inorganic route which will eventually work out in future, Estd a brand Alivera , if
CDMO traction happened to India only player to avail bcoz of USFDA approved , I believe Carlyle can buy on these valuation as well, consolidation will be for another year for sure,

Key question for me regarding Sequent:

How commoditized is Sequent’s product portfolio?

Gross margins have contracted 500bps YoY. That’s a lot of contraction compared to other API players such as Laurus (Flat), Neulands (110 bps contraction), Divi’s (100 bps expansion). I understand the other companies have some CDMO components but the broad directional point stands.

New CEO’s comments in yesterday’s concall were revealing - his effective understanding is that although Sequent calls itself “branded generic”, distribution led animal pharma is mostly commoditized with low pricing power. He said Sequent will focus on transitioning to more specialty molecules and formats (injectables) where pricing power is higher. Not sure how much weight should be put on a newly appointed CEO’s words, but his comments are definitely a warning sign for me in terms of evaluating Sequent’s overall pricing power in the market.

If Sequent does not really command pricing power, then valued at its FY21 full year EPS of 3.84 also it may not really be cheap at current prices (28x PE).

Anybody bullish on Sequent in the near term should listen to yesterday’s concall. The sense I got from the new CEO was that a reset button is being pressed in terms of Sequent 2.0 strategies and speed of execution. The earlier strategy is being re-evaluated (Not in terms of planned capex but maybe in terms of molecules) and further committal steps will be taken cautiously.

Look forward to comments from folks bullish on Sequent at these levels from a 1-3 year POV.

Branded generic in human pharma actually means something. Not so sure about animal pharma.A small and rather simplistic view- those looking to self medicate for a fever will ask for a crocin or dolo at their local Pharmacy. Most people won’t buy paracetamol from an unknown drug maker even if it’s way cheaper but if you are rearing cattle and your so called branded generic is up 20% you are unlikely to care about your cattle’s preference. You want the cheaper version

, one thing is clear people hardly check the anti thesis points . comparing animal Pharma to fmcg products and comparing sequent to biggest competitor was the biggest mistake . I have seen same narrative by fund managers and couple of brokerages not sure whether everybody falls by the story or just fail to identify it .in last conference call new ceo clearly told there is nothing branded and all they do is in generic .Depreciation of Turkish lira was part of the anti thesis but nobody cared it much untill it shows up in results. When those videos surfaced p/e of a ‘commodity API’ company was above 50 and still people blindly buy ( me too). There is nothing wrong in selling out and move on when ur thesis is not working .

Any stock spedific reason for todays fall?, couldn’t find anything in filings. 75% down from June 2021 top.

Not a technicals guy but weak days like these(especially with what looks like tons of margin calls in smallcap space) there is tons of overhead supply(people who hold the stock from higher selling out, which is a lot of people in sequents case).

Stock is in a classical downtrend, for those of us who would like to buy the narrative of RM cooling off and picking up animal apis at a cyclical lows, I would wait for a base formation.

In my pov its the effect of many factors into play, which can be stated as follows,

The above points are purely my pov. I might be highly optimistic or naive to have these understandings but for now this is how the overall picture seems to me. The watch is going to be long. I would be adding when the fundamentals look better or technical base seems to be made.

If you heard the concall, the management clearly said they don’t have pricing power despite them being branded players, and their distributors/ consumers are price sensitive. In my opinion, this is a clear fundamental divergence to what the earlier narrative was. Add to this, your points, no wonder it’s facing drawdowns.

The story might change in a year but it’s not investable today due to the thesis being broken.