Saregama has only audio rights, tips has video rights… the streaming apps have the logo of saregama, so I suppose saregema gets the penny from these apps…

Under the licenses column on youtube it’s mentioned by Tips that it is on behalf of Saregama. It could have been an old agreement between the two in the 80’s.

Decent quarterly results for the music business as a whole. However, starting to get concerned by the frequent tinkering with the ammortization policy of new music acquisition. Conveniently, this comes right before Saregama is likely to go into a phase of high content acquisition. Does anybody have any idea how global players ammortize rights?

The Group has a history of poor corporate governance, such accounting jugglery makes me nervous. Anybody have any thoughts? 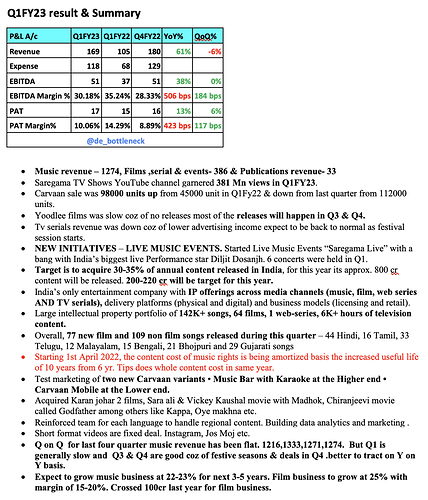 Global players does it between 10-25 years as mentioned by management in concall.

-Music segment grew by 38%, which might be better than global labels and other labels in India. Q1 is generally a soft quarter.

-In terms of revenues, Q4 is the best Quarter as International Publication Revenue & Society Revenue hits in Q4. Carvan also does well due to festive season.

-Whatever Music saregama is acquiring, its impact will be visible only 12-18 months down the line. As in Bollywood, music gets sold 12-18months in Advance.

-If Rs100 are spent on music acquisition, Rs20 is spent towards marketing and Rs80 is spent on the Actual Music.

-Rs 20 will be written off in Year 1 which is meant for marketing.

Why has this been done?

-Acquiring a lot of content going forward, have to prepare company for practical realities. Life of music in reality is much higher as proven by music from 1970s and 1960s still doing well.

-Unlike Global Peers, who do straight Line depreciation. Taking a more conservative approach of front loading Amortisation in earlier years.

-Did 6 successful events with Daljit this year. Business of live events should be EBITDA Positive and will contribute to topline.

-Events business is a 5-10% margin business.

-Youtube growth is coming through organic uploads on the SAREGAMA Channel. Market leader in Gujrati and Bhojpuri Music.

-How Music Licensing Revenues are earned?

Licensing Revenues aren’t too much Ad dependent, as in most deals SAREGAMA earns through fixed paisa per stream. No impact of ad slowdown on Licensing business. TV Part is hurting though (but too small as a % of business).

-New content acquired will start getting released from Q4FY23 and FY24.

3. Any slowdown in category or any streaming player going bankrupt.

Disclosure:- Invested since Early 2021, and continue to believe in long term story of Saregama, along with the risks mentioned above. Not a recommendation to buy or sell. Not SEBI Registered. Looking segmentally, Music Licensing revenues have grown 3% QoQ in a seasonally weak Q.

The useful life seems to be in-line with competitors below. Plus if we look at the revenue share from songs from 1960-2000 it is currently at 57%, which would imply that 10 years is not a totally unreasonable assumption for useful life.

Hipgnosis Songs Fund
The Group amortises Catalogues over a useful life, using a straight-line method of 20 years, which is in line with industry standard.

Round Hill Music Royalty Fund
The Board has assessed the useful life of each Catalogue’s assets to be 16 years and amortises its intangibles as such;

Universal Music
The majority of the music catalogues are amortised over 20 years on a straight-line basis. Some significant catalogues can be amortized over longer period of time. Wynk Studio could be key differentiator to compete with YouTube, Spotify

So as I understand the IP will owned by the artists and the creation cost also. Is it ?

IRR on new music. Management has done well in the past, will be interesting to see going forward.

on what parameters we can actually assess that the company is earning good IRR on new music and is doing prudent capital allocation on acquiring new content… would you look at traditional parameters like ROE and ROCE 2-3 years later to check how good IRR they earned 2-3 years back from that year in future? how one can assess this IRR?