Promoters hold 73% stake in the Company.

(b) Ferro alloys and power 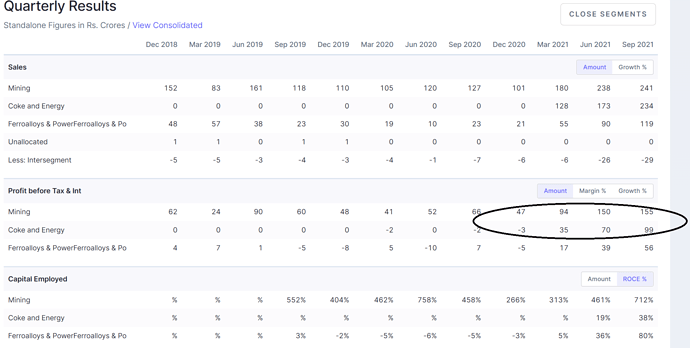 (b) Iron ore expansion (in final stages of EC)

Sandur has been for long trying to increase its permissible Iron Ore mining limits from 1.6 Million MTPA to 3.85 Million MTPA. Due to past issues in the mining sector in Karnataka, they haven’t been able to increase their Iron Ore mining production. They were in the final stages of doing this but they were recommended Public Hearing by the EC committee. Following this, they amended their initial plans and have now applied an EC to increase the mining limits from the current 1.6 Million MTPA to 4.5 Million MTPA. Key point to note is that via amendment, they will now be increasing the extraction of iron ore by 5x to 7.5 Million MTPA and will beneficiate the output and sell 4.5 million tonne of better quality iron ore. This is better as the quality of ore would have depleted on further mining. 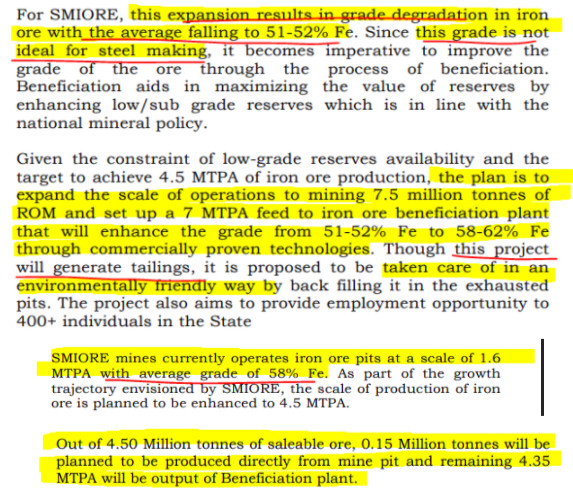 With this proposed expansion (pending EC), the company is expecting 2.8x volume expansion with growth in realisation as well as their current average grade is 58%. They will use the beneficiation plant to churn out higher grade Ore. Therefore, the value growth in Iron Ore can be 3 - 4x.

Sandur initially had a plan to set up a 1 Million MTPA steel plant but according to the recent EC filings, that has been revised and they plan to set up a Ductile Iron Pipe Plant of 200,000 MTPA capacity expandable to 300,000 MTPA later as second phase. This will be supported by Blast Furnace and Sinter Plant. Given that they have Captive Iron Ore and Coke, this project will be almost entirely backward integrated.

The idea behind forward integration is that when Sandur’s mines go up for auction in 2033, they will be in a position to secure the rights by showing the mine as a captive mine, though they will have to pay the premium as per the market scenario at that time. This also helps in mitigating concerns over sustainability as pure play merchant mining company. 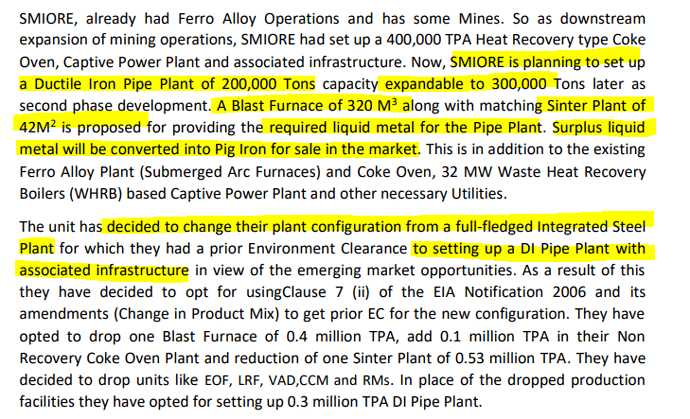 The company sells its entire Iron Ore & Manganese Ore through e-auction. Therefore any registered customer on the MSTC portal can participate and buy their Ore. The Karnataka Govt. has imposed a ban of exports of Iron Ore and therefore, the company generates 100% of its Iron Ore revenues domestically. Since transporting Iron Ore & Mn Ore is expensive, most of their products are consumed in and around Karnataka.

They are doing a large expansion in iron ore mining. Further details on their mining cost and how profitable this expansion will be- 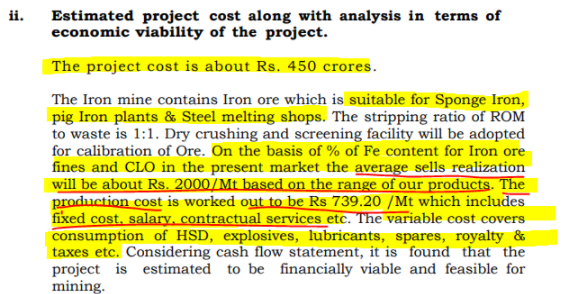 Source for all these images- EC Document

BARRIERS TO ENTRY
The non-mining business is capital intensive. The mining operations require a mining lease that is granted by the government which creates a huge barrier for new entrants. Other than this, it is a commodity business.

*Manganese Ore capacity has been assumed to increase from current 2.85L to 4L (mining limit is of 5.5L).

However, if we estimate the numbers based on current prices, this is what they look like-

The above numbers do not include DI plant projections.

On the lower end of assumptions (660cr EBITDA), Sandur is available at 2.6 times FY24E EBITDA at today’s EV.

With this proposed expansion (pending EC), the company is expecting 2.8x volume expansion with growth in realisation as well as their current average grade is 58%. They will use the beneficiation plant to churn out higher grade Ore. Therefore, the value growth in Iron Ore can be 3 - 4x.

The ~3x iron ore capacity expansion and beneficiation plant proposal was considered by the EAC in Jan 17-18, 2023 meeting. The minutes of the meeting (MoM) is available here. The MoM has the long and much awaited green signal for EC grant. 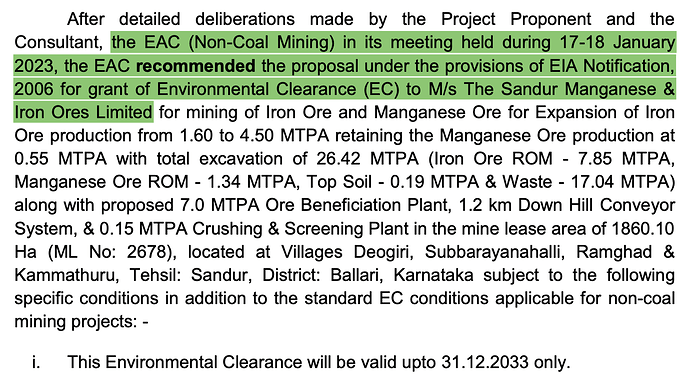