)- Promotors are having 75% share holiding and general pulic (floats) are around ~10.8%

)- Cash cow of Rossel India. It has been transformed with lots of changes in last 30+ years.

)- It is a monsoon, heavy asset and labour intensive business.

)- They are already having india based customers like DRDO, and last year they’ve got aerospace oem contract from Boeing

)- This division is expected to do a lot from current 10% revenue contribution considering FDI in Defence (More than 300cr project, requires 30% contribution from indian based company to tie-up)

)- It was started around FY2012-2013 with own brand called Kebab Xpress in New Delhi/NCR region.

)- Future plan is to spread into bangalore and calcutta (their HQ)

)- Q1FY15 – With 7 shops, they’ve contributed 2crores as revenue; FY2015 may have 14 crores possibly as revenue from this division

)- Read the food ratings and comments section – Almost all are good; Cost seems to be also normal

)- It is having 70 crores as short + long term debt; having investments in MF around 55 crores + 12 crores invested in JV called Rossel Enterprises pte (26% by Rossel:74% by devyani international) – Investments are done in taco bell franchise in an african country.

Overall the business on defence, aerospace OEM and QSR will give the differentiation in growth and value unlocking while tea business to be the cash cow!

Disclaimer: Already having a tracking position and please do the related analysis and take a call. It is a low volume scrip again.

Hi Hitesh, Ayush, Have asked your inputs in a thread and did my study from AR reports and other news items here. All VP’s, Please share your valuable comments about this business and queries/views to learn more. Thanks.

I am holding Rossel India since last 2 years. It is a good long term bet in my opinion. But do keep in mind that there is a good chance that QSR division will bleed as long as they are in expansion mode . 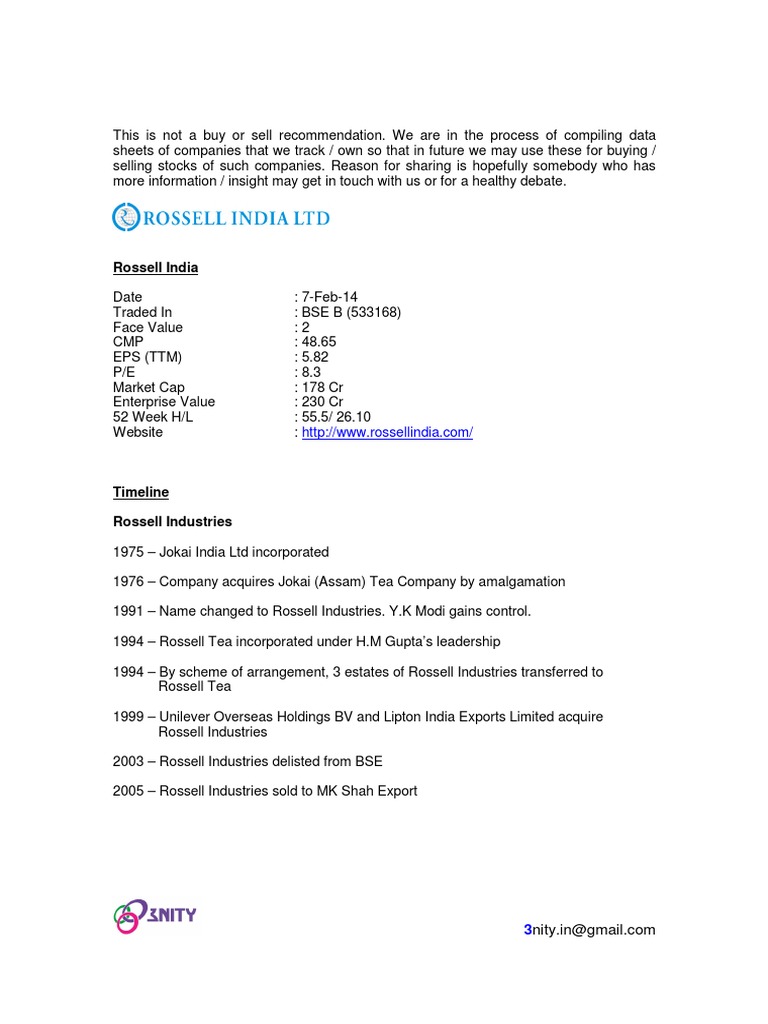 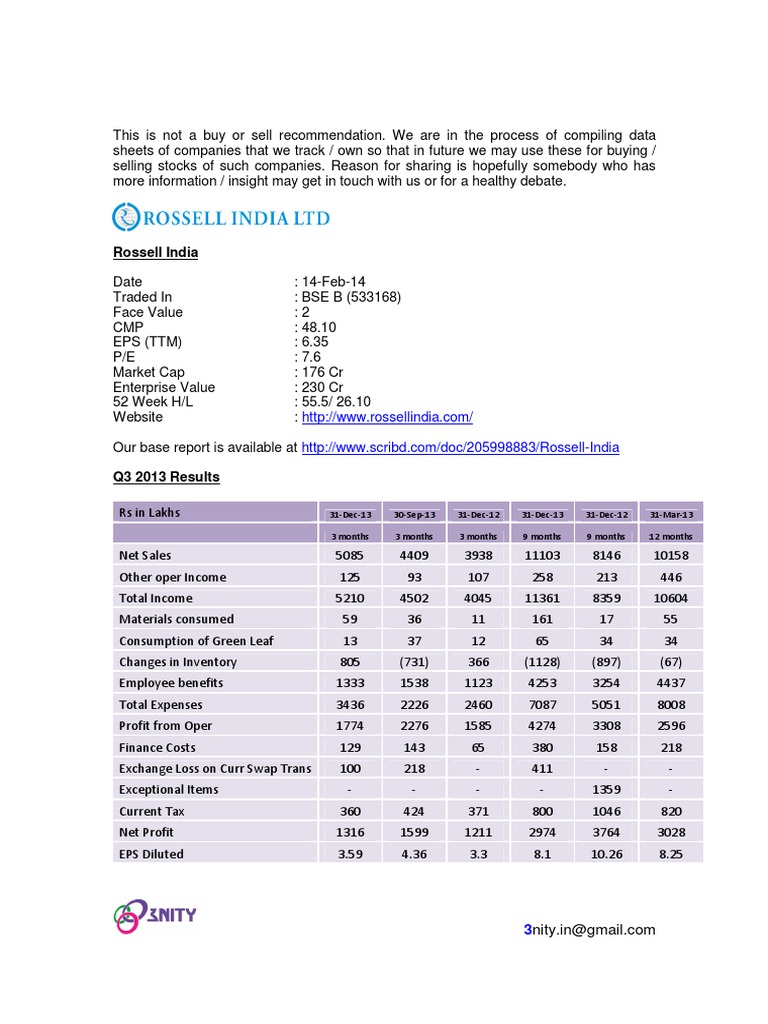 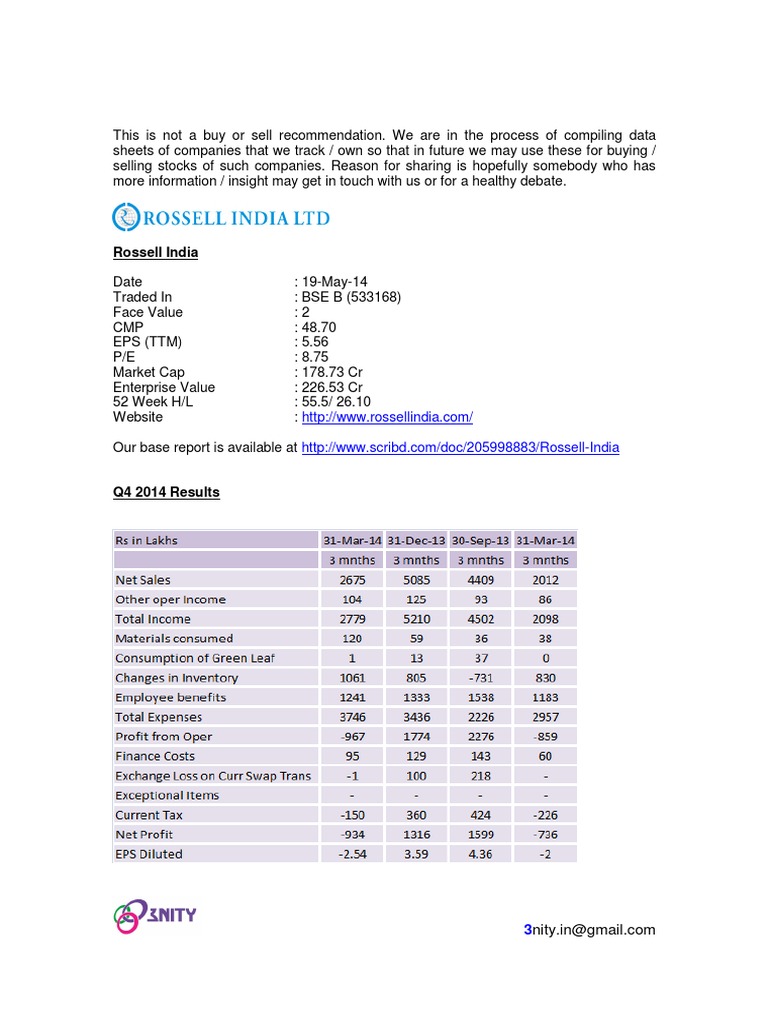 Rossell May 2014 Update | Board Of Directors | Valuation (Finance)

Thanks Bosco Menezes for the response. As per recent interview from management, they’re claiming to get into profit of QSR in Delhi/NCR setup in FY15 itself after reaching branch count around 15 (from current 7; Seeing already 8th shop is opened).

It will be great to know if any of VPs (from delhi) had a chance to taste Kebab Xpress menus and experience on it (scuttlebutt).

Thanks Bosco Menezes for the response. As per recent interview from management, they’re claiming to get into profit of QSR in Delhi/NCR setup in FY15 itself after reaching branch count around 15 (from current 7; Seeing already 8th shop is opened).

It will be great to know if any of VPs (from delhi) had a chance to taste Kebab Xpress menus and experience on it (scuttlebutt).

IMHO, classic “diworse-ification”. QSR is a low ROCE, capital destructive business in a country like India (most restaurants which scaled up have pretty low RoE’s given high rentals, intense competition and fragmentation of market).

Worldwide, the ones that producre good returns are those which spotted this trend early and now are franchisors (asset light, steady cash flows driven by brand royalty).

If the company is already into tea, doing value added products/branded tea would have been a far better idea - QSR market is even more competitive than the branded tea market.

Any views ? On what basis did they choose to diversify - why defence/QSR ?

I am holding Rossel India since last 2 years. It is a good long term bet in my opinion. But do keep in mind that there is a good chance that QSR division will bleed as long as they are in expansion mode .

If the company is already into tea, doing value added products/branded tea would have been a far better idea - QSR market is even more competitive than the branded tea market.

Would like to suggest to have read on the latest AR which is having good walk though of business and achievements.http://www.rossellindia.com/financial-result/Annual-Report-2013-2014.pdf. Add my thinking and points for the questions and would like to learn from the discussion again.

Company is certainly doing investments and plans to increase the main business i.e tea in coming years. Last year, they’ve acquired two estates and looking to get good opportunities to increase the tea production. Their realization per kg is very above then average measures.

)- They’re looking for the potential via defence FDI which is having clause that foreign vendors have to source 30% contract values (for contracts exceeding rs. 300cr) from local companies. Where rossell have invested on the plant/training resources and gaining experience from domestic projects. This will really be a sun rise industry to set of players where rossell will be among them.

)- Rossell is already having set of OEM projects on aerospace in domestic level and last year they’ve got a contract from boeing which gives the quality certification/credit to them. This will enable to go for global OEM service space on aerospace.

)- Revenue contribution’s are already there - 10% in FY14. We need to wait n watch on the potential they’re able to unlock. Also we’ve to factor the employees they’re having (all are from X service folks)

)- They’re starting with the own brand (kebab Xpress - North indian cuisine) and having already experience/exposure via running taco bell franchise in african country with JV with devyani international.

)- Currently having 8 outlets and thinking to get into profitability on reaching 15+ outlets which they’re hopeful in FY15 itself (Targeting to setup 20 outlets in FY15 itself). They’re following the central hub model where initial few outlet will be requiring more capital where rest will be mainly on rental + very low operational needs.

)- This industry is really booming and expected to grow 15%-20% cagr for next few years.

)- Having good executive team who is having very good business exposure on this domain http://www.rossellhospitality.com/management-executive-team.html.

We’ll have to see the management’s walk the talk in QSR in next few quarters.

Rosell India Ltd started its journey in 1994 as Rosell Tea Ltd. Along the way, it added Aviation and Defence manufacturing and service capabilities to its growth and diversification story.

About Rossell Tea (A division of Rossell India Ltd)

The Essence of Quality:

Our gardens are our special assets, star properties that have been acquired carefully and tended with care. Each of our estate is a jewel. The gardens came into our fold 22 year ago and several acquisitions, we are a family of seven jewels. These we guard and nurture very carefully. The ‘jewels’ yield true satisfaction and pleasure for tea aficionados around the world.

Rossell Tea is a Division of Rossell India Limited, earlier known as Rossell Tea Limited, which was incorporated on 10th June, 1994.

On 1st July, 1994, it took over Dikom and Nokhroy Tea Estates located in the state of Assam, earlier owned by the erstwhile Jokai India Ltd., established in the late 19th century. Jokai was a well-known mark in the tea industry renowned for its quality.

At the time of the takeover, saleable production of our black tea was 2.7 million kgs.

After successive acquisitions of other prized tea gardens located in the quality belt of Assam, reaching to total 7 tea estates such as :

Currently, our total area under tea cultivation, comprising all seven tea estates, is nearly 3000 hectares and currently has around 6000 employees.

A sizeable quantity of teas produced by us is exported to various overseas markets.

The Group’s exports are approximately 30% of its annual production.

The group has now capacity to produce about 6 m.kgs of tea annually, with major production of Orthodox (approx. 60%) and balance comprising high quality CTC teas.

Quality has been the prime mover at Rossell Tea and significant capital outlay, coupled with best field and manufacturing practices, have firmly established the Company’s reputation as a Quality Producer.

Strict controls in the field, the shop floor and thereafter, at Company’s tasting facility in Kolkata ensure that top quality teas are produced under the most stringent hygienic conditions.

Rossell caters to a large base of premier overseas buyers, mainly in the:

as well as the quality conscious domestic market.

Rossell’s commitment to supply Quality & MRL-compliant teas is evident from the consistent support shown by buyers globally and within the country.

The company’s direct exports in the last seven years have shown a growth of more than 300%.

Rossell India Limited is now, a diversified Company, the other Divisions being Aerospace & Defense, Product Support & Services and Hospitality.

About Rossell Techsys (A division of Rossell India Ltd)

Rossell Techsys is the Aerospace and Defence (A&D) Division of Rossell India Limited, and currently has around 425 employees.

In addition, Rossell Techsys is a member of IPC, RTCA and ERAI.

More certifications are on the anvil, including ISO 37001, DGCA (Directorate General of Civil Aviation) and ISO 28001.

Committed to the goal of meeting and exceeding the requirements of our Global Customers, we constantly strive to improve the effectiveness of our engineering & manufacturing systems and processes.

Rossell Techsys is fully eligible to be an Indian offset partner (IOP).

It is ISO 27001 certified entity and has an established information security management system (ISMS).

Does anyone have an updated view on Rossell India? From Tea to Defence is a crazy diversification.
There are some shoddy related party transactions happening in Rossell where promoter’s wife and daughter is getting too much employment benefits. - https://www.rossellindia.com/media/wvbhptts/related-party-transaction_31-03-2020.pdf

With Rossell Techsys setting up it’s new state of the art facility at Bangalore, with an investment of close to 90crores, does this add to the capacity expansion and its capabilities?

Rossell Tea Division as stated in the annual report can do approx 150-160 crores top line.

Rossell Techsys is where the thrust is going to or should come from. It already contributes 50% of topline, with the commencement of the new facility in Bangalore, will the topline go up?

Yes, as per 2020 and 2021 AGM, they have materially expanded their facility from about 80,000 sq ft to more than 4 lac sq ft. This has been done as they see huge increase in aviation business in coming years. They have also got good orders from new customers like Honeywell and Lockheed Martin and have doubled their order book. However FY22 maybe flat or poor they mentioned in the AGM due to Covid issues in the industry which led to deferment of orders.