RIL: Is the 'Reliance" on 'Jio' Justified?

Background
Established in 1966 as Reliance Commercial Corporation by Shri Dhirubhai Ambani as a polyester firm, Reliance Industries today stands as the largest listed firm by market capitalization in India. Dhirubhai took a loan and started the Reliance Commercial Corp, a trading firm, with a capital of Rs 15,000, operating out of a corner in a borrowed office in Bhaat Bazaar. The firm was renamed as Reliance Industries in 1973. In 1975, the company expanded its business into textiles, with “Vimal” becoming its major brand in later years. It’s IPO was one of the most successful one. Rs.10000 invested in the IPO (for 1000 shares at Rs.10), after accounting for the 4 bonuses the company has declared so far, is now worth Rs.1.7 crores (as on 23 April 2020) - An astounding CAGR of 19% over 43 years, and that too without taking into account the dividends paid.

Recent advancements
After the recent deal with Facebook picking up 9.9% stake for $5.7B, valuing Jio at Rs. 4.7 lakh crore, valuing Jio roughly 20 times EBITDA. After this stake sale, following two points are clear:

Investment Thesis
This seems to a great play on the ‘Great Indian Consumption Story’ via retail and Jio (tech business). Considering that Facebook paid Rs.43.5k crore for 10% stake, the rest 90% of Jio could be valued at Rs.390k crore.
The retail business has earned Rs.7,098 crores of EBIT for 9MFY20. Considering it earns another Rs.1350 crores in Q4 (50% of Q3FY20 - due to COVID-19), total EBIT stands at Rs.8400 crore for FY20. Assumming tax of 26% (highest), the net profit stands at roughly Rs.6200 crores. We can reasonably assign a P/E multiple of 50 to a highly growing profitable retail company (conservative as compared to other retail companies).

Based on the current market cap (23 April 2020), the Oil-to-Chemicals business + media business is getting valued at 275k cr, which is less than 6 times FY19 EBIT. Even though earnings are bound to decrease in Q4FY20 and FY21, this still appears cheap.
Apart from this, the consumer business are growing at a healthy rate, and could more likely grow at a >20% CAGR over the next decade.

It would be helpful if experienced members provide their insights on this.

Disclosure: Invested and holding RIL since the past 4 years and views may be biased.

RIL has 4 major segments of revenue:

You are missing few other business which they have under Jio :- wechat (whatsapp integration), netflix (Jio movies), Embibe (byjus), Alipay (jio pay), Jiomart (ecommerce), Telecom etc. Its the only play on all the above in listed space.

All those come under Jio that is their Digital business

Rights issue to be discussed on April 30 board meeting. Looks like Aramco deal might be postponed or even called off

Why would you say that? How is this connected to the rights issue?

They were raising funds from Aramco to reduce debt. Same is the reason for introducing the rights issue. There could be a possibility that the Aramco deal might be delayed (just my perception, I could be wrong). Due to this delay and to achieve the goal of becoming net debt free by March-21, the rights issue could have been brought.

Theres an interesting article here that covers the deal
https://fi.fintuple.com/insights/reliance-finally-accepts-a-friend-request-and-its-name-is-facebook

Hi everyone, can anyone please shed some light on the below:

RIL has been constantly reporting depreciation which is literally 1/4th of capex it has been doing. If you see the past 10 years data as well, depreciation numbers have been way too low when compared to capex, bringing the free cash flow to negative.

Whats the catch here? What am i missing? I know their oil and telecom business is capital intensive but still seeing the deviation 10 years back as well. Plus over the long term, it ideally makes sense that depn roughly equals capex right? Please let me know your thoughts.

For the last 10 years RIL has been on an expansion spree. New plants for Petro chemical business. Massive capital outlay for Jio. Similarly, opening new Retail stores every day. All these were happening since late 2000s.
That is also why you would see that the company’s RoCE was very mediocre as the capital expenditure was not resulting in any rrevenue. Only since early 2017, once Jio went live and the Petro plants became active did the company start seeing it’s numbers improve.

So, in short, you are not missing anything.

Reliance’s 4.9 per cent stake in the paint maker is worth about 74.9 billion rupees ($989 million), based on the last price.

A stake sale would be the latest in a string of fundraising plans unveiled by Reliance. 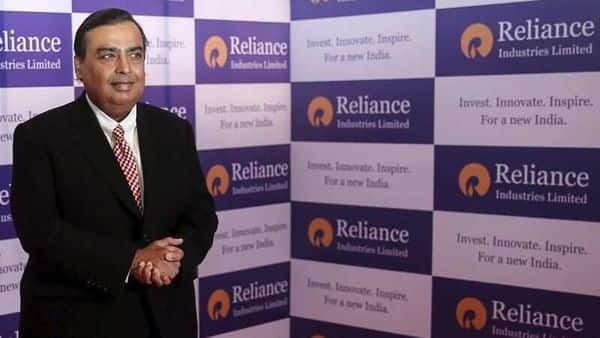 Just adding one snapshot featuring all the new stakes in Jio 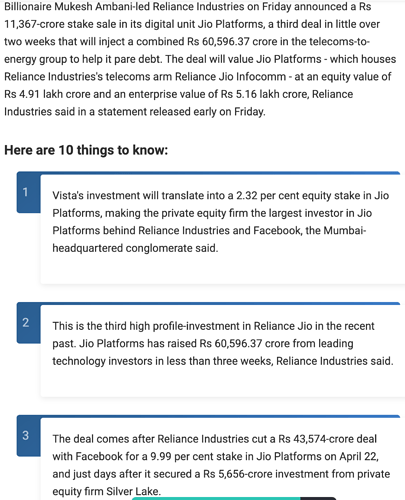 My personal opinion - Either love him or hate him, Mukeshbhai is taking serious efforts to reduce the Reliance debt.

Your views are invited,

My opinion is these are just announcements and may not convert into a deal. Moreover RIL will see a washed out Q1 in petroleum and retail sales and also a subdued one for Jeo because of income loss in unorganized sectors. RIL is not into retail sales of petroleum products and therefore does not get benefitted by lower crude prices.On the other hand, due to lack of demand , the refining margins would remain soft and refinery capacity utilization would also be lower.Due to there back to back announcements, RIL share will remain propped up and rights issue would get subscribed collecting the largest amount as rights issue at a reasonably good price.
I think post rights issue and after Q1 2021 results, the share would be available below issue price. Views invited
Disc:No holding

Ran some numbers comparing Jio vs China Mobile (CM). CM is the world’s largest telecom company. CM hit its peak valuation of $400 bn in 2007 when it was a similar size as Jio is today (and China roughly where India is today). 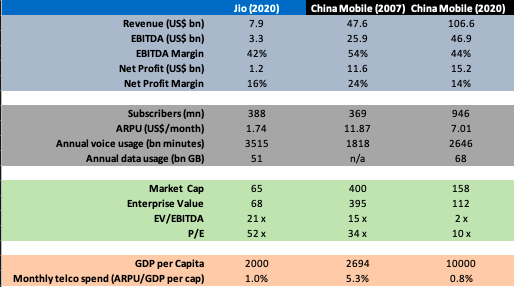 Here are my key takeaways:

Things to consider when valuing Jio:

The biggest risk as always in India is the government, but that might also be Jio’s biggest strength…

Is Reliance beating its Cost of Capital?

Overview Reliance, as we all know is in multiple business segments like Refining, Petrochemicals, Oil and Gas, Retail, Digital services etc. It is the topmost company by market cap. To keep this in…

While Reliance is selling stake in Jio and partnering up with Facebook, on the other hand it has also gone for the restructuring of Network18 group. The group will now have about a 7% share of India’s broadband connections under a completely owned subsidiary which might be sold to Jio in the future.
Can anyone please list the observations related to advantages for the Reliance group in this restructuring and how the Facebook deal can affect the Network18 group.

Reliance has announced several stake sales to high profile companies with in a short period of it’s rights issue which obviously upped it’s share price and may help in smooth sailing of its issue price at a good price in a v. difficult environment.since you HV a done a detailed study through your post, did you check if these announcements have been converted into binding agreements or may even be called off by the buyers at a later stage?
In view of low crude prices and negligible sales, the losses of Reliance are likely to be much heavier in Q12021. The only Saving grace could be reliance Geo. Have you worked out the estimated earnings of reliance in Q1 2021 and it’s impact on share price? Is there a possibility of its going below it’s issue price post declaration of Q1 results?
Disc: No investment

RIL rights issue will open for subscription on May 20,2020.

In addition to the usual modes of subscription,
they have provided an additional option via the registrar’s web based platform for applying for the same.