I have been following VP for almost a year now, and this forum has been helpful in improving my investment process.

Below is my portfolio along with the rationale for selecting my picks.

Objective is to generate Nifty + 3-5% returns p.a. over the next 5 years. Please let me know your thoughts.

Noticed No exposure to FMCG? Any specific reason?

A well diversified portfolio. All the best.

Even I noticed No exposure to FMCG, Paints and Prominent IT companies?

Considering extremely high PE of most FMCG/Paints sectors I have stayed away from them.

I have exposure to TCS and Intellect Design in IT space. 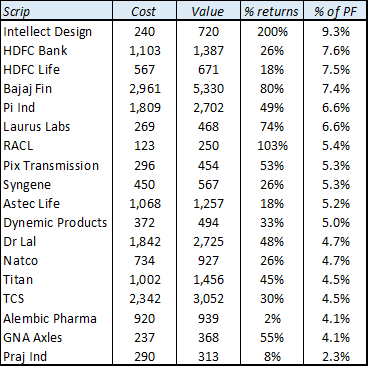 In terms of investment style, I am allocating to compounders (mid-large caps) and then potential high-growth stocks (small caps). Currently have 18 stocks - gives me the benefit of diversification with reasonable concentration since I intend to have at least 4% allocation to each individual stock.

Sharing my updated pf since it went through some overhaul recently.

Exited - TCS, Titan, Alembic Pharma (all three are excellent quality companies, and it pains to sell them)
Entered - Mastek

Proceeds from sale of TCS primarily went to Mastek. Proceeds from Titan and Alembic were used to concentrate my existing bets.

Exited TCS because found a better priced opportunity in the form of Mastek. TCS is a solid compounder machine, expected to clock 10-15% CAGR, with healthy dividends. I find Mastek to be relatively undervalued, especially with the growth triggered by Evosys acquisition (should open up opportunities in US). They also have a fair chunk of cash on books, and could present optionalities for tuck-in acquisitions. UK market has been growing well for them, so offers a decent base as well.

Titan is an excellent franchise, but current valuation limits future appreciation to <15% CAGR. While the theory says not to sell companies just based on valuations, I think in case of well discovered large caps, it becomes difficult to make returns beyond earnings growth at such high valuations.

Alembic Pharma has been discussed enough on this forum. There is pressure in oral solids, sartans opportunity has tapered off. So next leg of growth needs to come from injectables and domestic brands. I find Laurus and Natco better placed to deal with these circumstances. Laurus, with their diversified non-ARV API plus CSM/Bio optionalities, as well as Natco with their FTF/Para IV strategy are ahead in the curve. I expect Alembic to consolidate till they start firing the injectables business, and will re-evaluate them.

I got a bit lucky with Neuland Labs in the recent carnage - my entry price was 2150-2200, but I managed to sell off a major chunk of it around 1900-2000 mark purely for tax loss harvesting. It was just dumb luck. My view on the company’s fundamentals hasn’t changed, so I entered back yesterday.

I would ideally like to have a minimum allocation of 4%, with 15-20 scrips to offer the benefit of reasonable diversification along with concentration. Praj has the least allocation currently, because I can’t mentally build a reverse DCF model for them. For all the other companies, I can visualise what might happen in 3-5 years, but Praj is a dark horse. Their India ethanol story is mostly priced in from a revenue point of view. But margin accretion could show some surprises. Similarly, their CBG business and BioPrism could throw up some surprises, but I don’t have conviction to put more into it yet.

Lastly, I would like to thank some of the forum members who have been spearheading the next wave of growth in VP - @sahil_vi , @Tar @Chins @Malkd @gurjota

PF update after 3 months below.

Last 3 months have been interesting, particularly the months of October and November which saw most of the alpha getting eroded. Majority of this is due to the pharma-heavy portfolio, which is seeing headwinds in the near term. Some lessons for my reference:

I don’t think both these are heavy mistakes since the long term thesis of Laurus hasn’t changed, and CV cycle for GNA Axles in India is yet to play out. But ultimately, allocation decisions are based on opportunity cost, and adding to other stocks could have been a better option.

I have added two new stocks - Jash Engineering and Steel Strips Wheels during the last couple of months.

As next steps, will closely monitor the performance of pharma and chemical companies in the next couple of quarters. Auto ancillary stocks could get heated in the coming quarter, so would need to keep track of froth in these stocks as well.

Some of my current bets have a relatively lower allocation - idea is to remove underperformers over the next 1-2 years and then concentrate on the overperformers.

That’s a stellar portfolio! Keep it up. Best of luck.