I have come across an opportunity for participating in pre IPO placement for shares of BSE. I dont know how this works and I dont understand the risks other than the shares are locked for a year. Dont know if this is even meant for or legal for retail investors or this is only for institutional investors. Who decides the pre ipo price and what if the IPO comes later at a lower price or if the IPO does not come at all or is very delayed.

Could someone please throw some light.

Let me tell you how this works. I do track this market. The pre IPO shares are generally allotted to employees as ESOPs or some kind of private placement. Incase of BSE these have been allotted to the brokers registered with BSE. It is legal in most cases to buy these shares. You can get more details about these companies by registering with MCA (Ministry of corporate affairs) website and downloading the documents(ARs) available there. Incase of BSE you can get the ARs and QRs on the BSE website itself.

Risks: The major extra risk in such companies (other than the usual ones) in general is the uncertainty in listing and lack of availability of public info. Further due to lack of liquidity your buying and selling price may differ around 10%. In the case of BSE the listing has already been delayed by 3 times. BSE being a stock exchange there are a lot of other factors that are coming into play. The IPO price is decided by the issuing company in ways similar to how other companies do. Incase of BSE the stocks were issued to Brokers at around 500 Rs after which there has been a lot of erosion of value.

Thank you Anant! They are being offered at 182 so looks like a stock clearance sale.

Make sure to check the tax implication because pre IPO (as per my undertanding)will be treated asan off market transaction.

Most probably BSE IPO will come this year… At this price 182 it could be a good deal to grab, as IPO listing price would be definetly much higher than this… However the only risk is lockin for 1 year for Pre-IPO ! 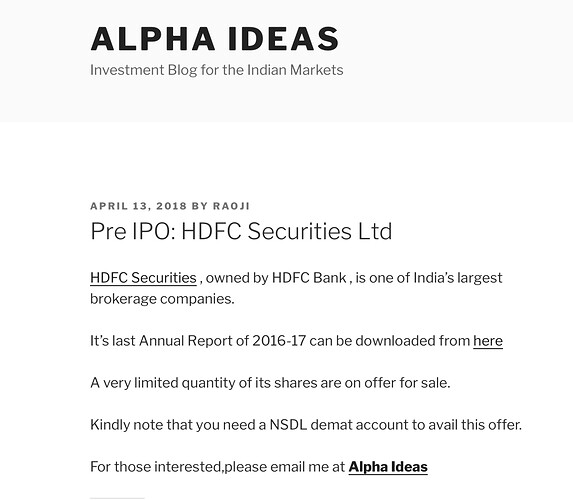 Please do your diligence, I have no personal interest nor applying for this.

The Pre-IPO market is quite buoyont now. However, the dealers today are selling everything that is available with them. I am no expert in this, but have been observing this and invested small amounts of money from time to time in some Pre IPO scrips.

Some of the common issues faced while investing in these securities are as follows:

a) Liquidity - Any scrip that doesn’t trade actively has this problem. Unlisted companies will be very difficult to exit. I have not tried exiting any unlisted company i had invested in.

b) Duds- Like any portfolio, there are bound to be duds here. Some companies may never list and even disappear entirely. So it is best to avoid companies whose financial statements are difficult to obtain.

c) Holding companies - This has been elaborated in one of the presentations by @anantjain87. Investors might get sucked into investing in holding companies which are never planned to be listed. It is best to avoid such companies.

d) Delisted companies- Though the companies might be performing well, these got delisted for a reason (voluntary/forced). Forced delisting could be a common case in MNC companies. Voluntary delisting may be due to other plans of the promoters in taking the company private and selling stake to PE firms for a profit (Example Manjushree Technopak which was once widely followed in this forum).

e) Cash burning startups- This could be a mixed bag. But it is better to exercise caution. I have heard that shares in Ola, Oyo, Paytm, Swiggy etc are available. As long as these companies are able to raise funds, everything seems great and even the paper valuation might increase. Based on my observations, it is better to be a stakeholder like an employee/consumer in these companies unless you have decent exit options. If listing is the only exit option, it is better to avoid or limit investments in such shares.

f) Companies with regulatory/internal issue- There are cases where SEBI has delayed IPO for many years now. It can take many more years as well. If one is interested in a company for exiting after IPO, it is better to avoid companies with regulatory overhang. NSE has been trying for IPO for many years now. It may come in a few months/years. Catholic Syrian Bank has been trying since 2015. Tamilnad Mercantile Bank is facing internal opposition from significant Nadar shareholders who don’t want it to be public.

g) Overvaluation- In-spite of pre-ipo market being a tiny portion compared to public markets, there is widespread overvaluation due to scarcity of shares. In some cases, this may be justified, but in most it is not.

h) Companies with no plans to list- There might be some companies which never plan to list. Such companies may be very successful. But for a small investor, exit might be difficult and the sell price may be at a significant discount to the prevailing buy price (bigger bid-ask spreads).

i) Novelty- Investors are enamored by a new type of business whose parallel doesn’t exist in public / private markets. Just because a company does something innovative, doesn’t guarantee that it will do well for shareholders. Hence, it is better not to fall prey to this.

All said and done,there could be some very profitable ideas lurking in the pre-ipo space. It is best if one can find a company which can grow at decent rates and long runway.

It is another problem that it is tough to get hold of the best names. I have tried purchasing small quantities of Avenue Supermart, Bandhan and Au Small Finance and was unsuccessful. The dealers just didn’t have enough supply and whatever little they had, they invested in it themselves. It is common that the mediocre ones will be always be available in plenty and due to availability bias, it is more common that people invest in such stocks (example MSEI. Have seen this getting advertising in newspapers as well).

“A lot of retail investors lost over half their money as Reliance Retail was valued at around Rs 5 lakh crore earlier in the unlisted space,” said Sandip Ginodia of Abhishek Securities, which deals in shares in the unofficial market for unlisted...

Here, Private market trading was at exorbitant prices. People got sucked in at higher prices. The beneficiaries were the unlisted dealers and possibly employees who exited at higher prices. Maybe now the brokers are left with some inventory which they will be forced to swap or sell at lower prices.

Disc- Not invested in Reliance Retail or RIL

The Big Bull sees a big bubble in the unofficial market for unlisted shares.