I had started looking at this company when it came out with an IPO as I found it to be interesting reading the IPO notes of various brokers, etc.,. But wasn’t able to apply due to liquidity issues.
Disclosure – Finally was able to buy from secondary market post listing. Hence disclosure at the beginning itself that I am invested in Power Mech Projects.

Purpose of the IPO was to provide Motilal Oswal PE and exit and at the same time raising cash to pay debt partially and to utilise rest of the funds for WC requirement.

Luckily Nirmal bang also started covering this stock and has come up with a detailed report on the same (can be found here). I am utilising excerpts from Nirmal Bang report to provide a brief summary on the stock.

Company-
The first step of setting up a plant is the most arduous for any power company. It requires intense engineering expertise which is often in short supply—and also proves expensive to acquire and retain. The simpler option is to outsource the heavy-lifting: Enter Power Mech Projects, a Hyderabad-based company, which spotted this opportunity back in 1999.

Power Mech Projects (PMP) is an integrated power infrastructure services company providing below services to power plants which are nothing but the business segments that Power Mech. operates in:

In 2013, it built, tested and commissioned projects for a cumulative capacity of 40,000 MW across India. It also erected 65 boilers and 80 turbines during the period. And, in the process, it crossed Rs. 1,000 crore in revenues for the first time.

Some Financials and Ratios-

Power Mech looks like a play on it getting better valuations and then being driven by improved earnings. There are no like to like comparable players with closest one being Sunil Hitech and BGR Energy Systems. Power Mech seems to be trading at discount to both these Sunil and BGR as it is trading at 10-11 times earnings and at an EV/EBITDA of 4.8 (estimated FY16), whereas BGR trades at 15 times earnings on TTM basis and EV/EBITDA of 8.25 times and Sunil although trades at similar valuations as Power Mech but Power Mech has better return ratios, operating metrics, WC cycle as compared to both BGR and Sunil.

I think Power Mech should trade at 15 times earnings or EV/EBITDA similar to BGR i.e. 8 times.

Hence I have taken a position expecting a re-rating and after that better numbers driving the stock price post re-rating.

P.S. - This is not a buy/sell recommendation. I am an amateur investor and not capable enough to analyse a stock. Above are just my views on Power Mech., which may be biased as I am invested in the stock. Please do your own due diligence.

Reason - Selling PM is not a change of view on PM or not because I am not convinced about PM. It is just because I further added to present holdings of both Ajanta (as a core long term holding I found Ajanta giving good entry points at these level) and Indian Terrain (post results I think Indian Terrain has become more attractive).

Expects to close FY16 with a revenue growth of 7-8%

Power Mech Projects held a conference call on Feb 15, 2016. In the conference call the company was represented by Kishore Babu, CMD; Kodendaramaiah, Director; Rajendran, COO and Satish, CFO.
Key takeaways of the call

Of the total erection order backlog the share of BHEL is coming down from about 60% in FY15 to 50% in FY15 and now it is 40% of current order book.

The company has submitted bids for O&M orders worth over Rs 500 crore from SEBs. The bids are for two projects and the first one worth Rs 265 crore will open in another 20-30 days and the second project which is of Rs 300 crore ticket size will be opened in April 2016.

Sustainable O&M margin typically will be about 18-22%. O&M segment revenue will be 40% of the company’s FY17 revenue compared to current 27%.

Of the current order backlog the share of slow moving orders are Rs 180 crore largely in erection.

O&M orders are typically for 2-3 years.

The company is looking at civil jobs in railways and irrigation. If any orders materialize the civil vertical get a boost.

Employees on payroll is about 5000.

Hydro Magus, the subsidiary company is engaged in supply and construction of hydro plants on EPC basis, Renovation & Modernization, O&M etc. Its Current order backlog is Rs 35 crore and the company expects addition of another Rs 20 crore orders by end of this fiscal. Revenue for FY16 is expected to be about Rs 20 crore. Typically EBITDA for its business is 15-16% and a net margin of about 6.5-7%. Next fiscal the revenue is expected to scale up to Rs 45-50 crore. The CoD of Noida workshop will be declared before March 31, 2016.

any view on huge contingent liabilities of PMP ltd

Recently announced orders increase order book by approx. 650 cr. Stock price also responded a bit with orders. What I want to know from fellow members, which company fits well for peers for powermech projects. I want to do peer comparison, but in screener.in it shows L&T, voltas etc. that is not comparable.

Power Mech Project is a final buy today, since Aug 23, 2018 there may be good news 😉 https://t.co/fsBgviyvkF

One can buy shares of acquirers in the firms as NCLT cases could see a 40-70% haircuts.

There are four little-known companies eyeing Lanco Infratech. “One can buy shares of acquirers in the companies as NCLT cases could see a 40-70 per cent haircuts. With a sound balancesheet and probably in the right cycle cyclically, if stronger companies acquire a company at a 60 per cent haircut – and the IRR on that acquisition is northwards of 20 – the market is more likely to rerate that company than the lender, which took the haircut,” Rohit Agarwal from Kotak Life Insurance recently told ET Now.

If anyone attended the AGM or knows answer to these questions I complied going through the company AR may response:

All figures from Standalone only

Disc: No investment but trying to understand 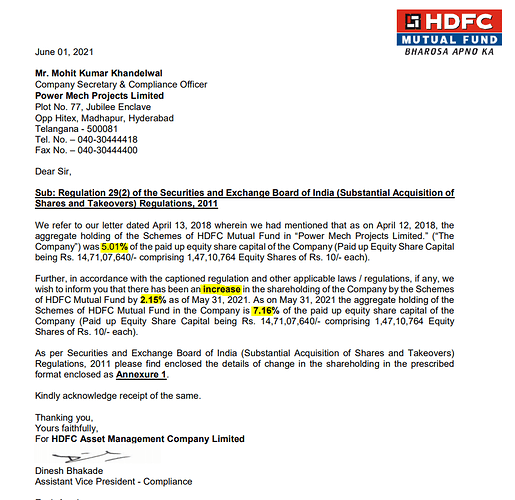 Increase in holding by HDFC MF

Company’s plan for diversification is bearing fruit. Last Annual Report also gave a lot of hints about their plans.

It is incredible that they got the above-mentioned project. It speaks volumes about their reputation.

The contract will primarily comprise of mine infrastructure development, removal of overburden and extraction of coking coal, processing, crushing and transportation of coal up to washery of CCL, carrying out R&R activities at Kotre Basantpur...

The concession period is 25 years including two years of development period with an option of extending the contract for a period of another 10 years with the consent of both the parties. With this, the total contract period will extend up to 35 years. 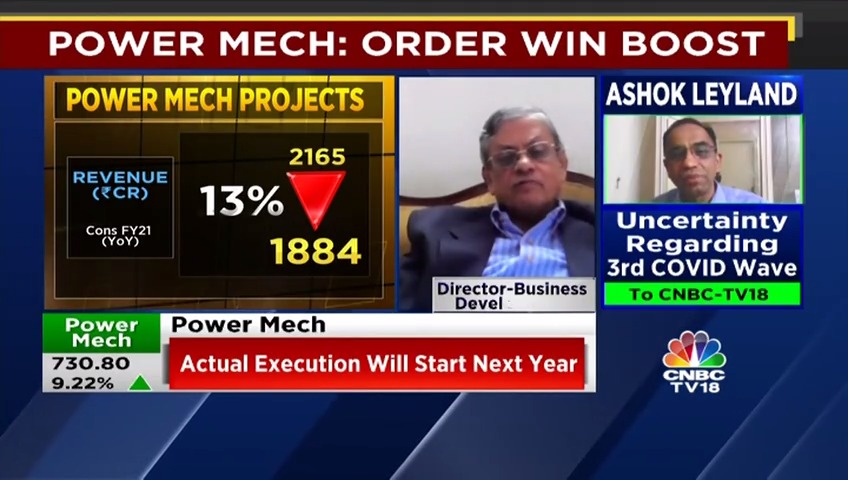 #PowerMech buzzing in trade on the back of an order win worth Rs 9294 cr frm Central Coal Fields. Co's Biz Dvpt – Dir, S Kodandaramaiah tells @_prashantnair & @Reematendulkar that the #CCL contract is spread over 5 yrs. Adds that contract execution is set to start next year. https://t.co/9ICzQDFGOY
4 Likes
rcinvestor999 October 11, 2021, 9:27am #16 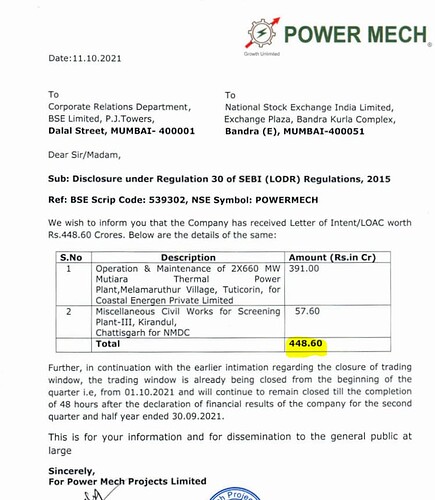 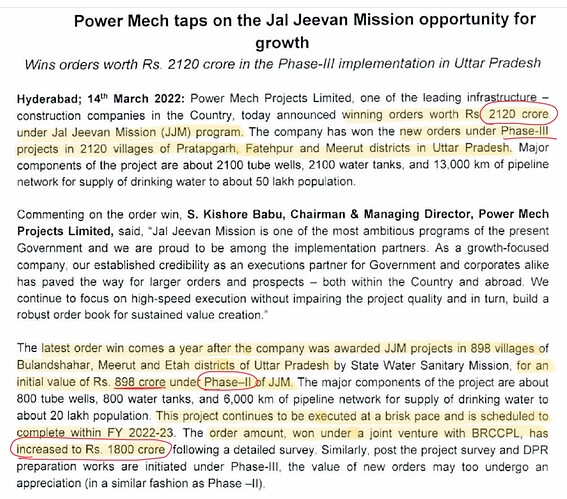