Overview
Pasupati Acrylon Limited is an India-based company, which is engaged in the manufacture of acrylic fiber, tow and tops, and PPT films. The Company has an acrylon manufacturing plant at Thakurdwara in the state of Uttar Pradesh. It has a manufacturing capacity of approximately 42,000 tons per annum (TPA). It offers a range of deniers, ranging between 0.9 to 15 denier; cut lengths, ranging between 38 to 150 millimeters (mm), and luster in various categories, such as bright, semi-dull and gel dyed. Its products are used in various sectors, such as sweaters, shawls, apparels, blankets, carpets and upholstery. It also offers specialty products, such as hydrolon and low pill of shrinkable fiber. It offers fiber as raw white, including bright or semi dull; bleached, including optical white; tow dyed in various colors, and gel-dyed in a range of colors. It exports fiber and tow to various countries, such as China, South America, Israel, Bangladesh, Indonesia, Turkey and Europe.

Pasupati was designed for a rated capacity of 15000TPA. By means of various innovative modifications and debottlenecking the capacity has been enhanced to 30,000 MT. Now with the installation of an additional spinning line the capacity has been further enhanced to a level of 42,000 TPA. Advanced technology, automation, computerized process control systems and captive power, make the operations of Pasupati extremely efficient and reliable. Pasupati is one of the best plants in the world, running on SNIA technology.

The company has diversified into CPP Film (flexible packaging) and has set up manufacturing capacity of 5000 MTPA which started commercial operations since September, 2017. The total cost of the project was Rs.32 crore funded entirely through internal accruals. The company is currently ramping up the production and FY19 would be the first full year of operations for the CPP project. The company is selling the CPP Films under the B2B model, primarily to converters. The company has reported income of Rs.8 crore from this segment during FY18 (6 months of operations). The company has further expanded its CPP capacity by another 5000 MTPA with a total cost of Rs.20 crore funded through internal accruals in Q4FY19.

Key Strength
Pasupati Acrylon Limited (PAL) was established in 1982 and has established itself in the industry as leading manufacturer of Acrylic Staple Fibre (ASF). The domestic ASF industry is concentrated among 3 large manufacturers totaling to around 104,000 Metric Tonnes Per Annum (MTPA) of overall capacity. PAL is one of the largest acrylic producers in the country with 42,000 MTPA 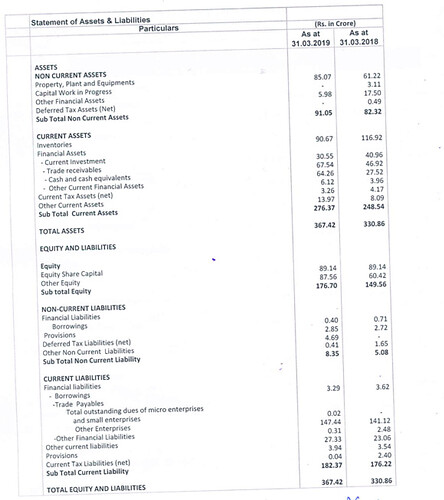 High inventory holding
The operations of the company are working capital intensive as the company holds inventory of around 80 days. As ACN is an imported raw material, the company maintains an inventory owing to transit time given the fact that majority of raw material is imported from Korea and Europe. The average collection days for the company has remained around 25 days as the company provides 20-30 days credit to its domestic customers while the export receivables are either backed by advances or LC.

Competitive industry scenario with cheaper substitutes and imports
Acrylic is a substitute for cotton, wool and polyester and thus faces intense competition from these substitutes. Furthermore, the industry also faces competition from imports due to demand supply mismatch and capacities. The domestic acrylic industry is concentrated among few players and the major raw material ACN has high volatility. ACN prices have fluctuated from around $1450 MT in April 2015 to around $900 MT in April 2016 and trending back to around $2100 MT level in July 2018. Thereafter, in Q3FY19, ACN price witnessed sharp fall and reached to a price of around $1300 MT. The price has further firmed up since then and has remained around $1750 during Q4FY19.

Disc. Initial entry into the stock at around 15 rs. Invested .

Why invest in this company? Low PE ratio or something more?

This company is showing good growth despite of slowdown in economy. Company posted superb result for Q1-19. 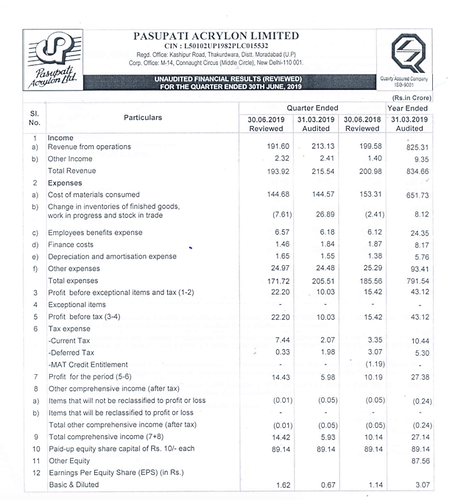 The increase in profit in Q1 FY20 is due to negative change in inventories which were built up in the last quarter of FY19. The inventories will dissipate in a couple of quarters (hopefully) and then again the company will build up inventories.

Is anyone tracking this?
Dismal set of numbers.
Anyone attended AGM ???

They don’t pay dividend as they are increasing their reserves. As you would have noticed that the company was with negative reserves few years back, it would be better to have more reserves than paying dividends.

I have been tracking this company for few years. I think the company won’t have very good quarters (at least 2-3 next quarters). That could be the reason for stock trading low.

Pasupati Acrylon Limited has received approval for listing of its equity shares on National Stock Exchange of India Limited (‘NSE’).

The equity shares of the Company shall be listed and admitted to trading on NSE with effect from 12th October, 2O21 and designated symbol shall be ‘PASUPTAC’.