Panyam Cement as a stock investment idea came from came from AceInvestorTrader blog (link at the end). Coincidentally, SP Tulsian recommended it in the last few days (as I was compiling this post) and there was a management interview also (links provided below).

Basically, it’s a turnaround case. The plant was shut in Nov 2013 due to lack of power and was restarted only on 21.07.14. Sales and profits since then are showing some signs of improving.

Its current capacity is not exactly known, however, they commissioned an enhancement in capacity from 550TPD in Kiln 1 to 1800TPD on 10.08.2011. The company reported capacity of 5.31 lakh tons per annum in their 2011 annual report (when their Kiln 1 capacity was 550 TPD), however stopped reporting the capacity thereafter. In any case, they haven’t been able to make full use of their capacity for one reason or the other.

The owners are part of Nandi group and I had read earlier that they had political affiliations. The MD however is an IIM Ahmedabad graduate and is said to be running the company professionally.

The company is based in Telangana region which is expected to witness very high demand given the planned infra development activities (there are several new bits regarding how this region is expected to attract lot of demand, so this bit seems plausible). In addition, it also sells in neighbouring states like Goa, Karnataka. It has access to limestone mines close to the plant.

Following information is compiled to indicate that turnaround is taking roots: 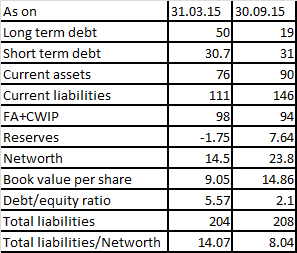 Reduction in debt and debt equity ratio is positive. Though it is still high at above 2x. Total liabilities to networth is uncomfortable

Accretion to reserves is also positive.

They had 25 cr of CWIP as on 31.03.15, which seems to have come down to 20 cr as of Sep’15 which indicates some capex is on – either balancing equipment or debottlenecking or some such. 2015 annual report had a figure of 4 cr under Estimated contracts remaining to be executed under capital account (Rs 6 cr as on 31.03.14).

Pledged shares are down a lot and promoters are slowly buying shares from market (albeit marginal). There was one internet link which had compiled information (it was a paid site) for potential acquirers. However, acquisition (ie promoter selling out) is not a part of my thesis yet.

Some historical financial and production data:

Some recent Quarterly data, which indicates improvement in financials:

They say that they will produce total 8 lakh tons in FY16, which works out to approx. 175 Rs per 50 kg bag, which considering current prices of anywhere from 250-300 Rs per bag, looks conservative and achievable.

They also say margins would remain in line with 1st half of the year. Assuming margins as given in the table, expected net profit in FY16 is around 20 cr, and current market cap is 128 cr.

Some Negatives in financials:

There are huge statutory liabilities under dispute shown as contingent liabilities (eg. IT claims of 42cr, Excise claims of 11 cr, Royalty delays penalty 13 cr etc). If these become payable, then the company would be bankrupt.

There is a component of interest received of 5 cr in 2015 (4.3 cr in 2014) which is included in the profits. Sustainability (genuineness?) of this is unknown.

Significant related party dues within the group – eg. 60 cr given to associate company as deposits/advances, corporate guarantee on behalf of group companies of 220 cr etc

These are significant figures, on which there is no clarity.

Concluding remarks:
I admit, this would appear as a leap of faith kind of stock.

It corrected 20-25% after Q2 results, which I was not very happy with, especially the profits. However later it struck me that Q2 is monsoon quarter, and in such a period, if they have done sales which is just 25% below the Q1 figure, then it is actually quite decent.

Given presence in Telangana, cement demand being especially good in 2nd half of the year, access to limestone mines close by, some bit of capex going on, reduction in debt, increase in promoter holding, reduction in pledged shares, near term prospects appear good. Part of it seems to already be in the price, but if they continue like this even in 2017, then it could really turn out to be cheap at this price. This would need close monitoring and hence current allocation cannot be high.

Taken starter position at 60, added a bit recently. However it’s a very miniscule portion of my PF allocation as yet.

Links and other info: 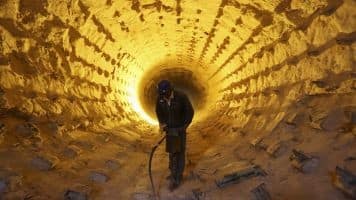 S Sreedhar Reddy, MD of Panyam Cements expects margins to remain at same levels and revenue to be Rs 160 crore against Rs 120 crore in HIFY16. 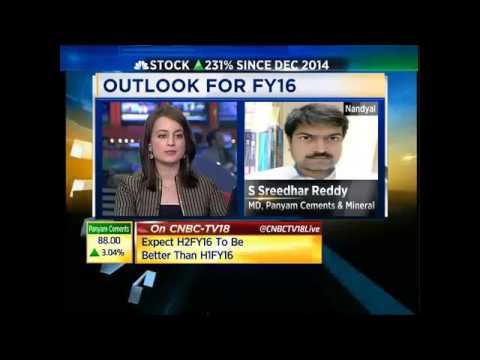 Background: Cement is one product which is mostly dependent on local factors and is relatively insulated from the global turbulence, be it Fed action or China. Thus if we can find companies that ar…

While it may make sense in valuation, I would still ask to you to check same at operational efficiency and management paramter. In my opinion, a fake note of 10 and 1000 are both valued as waste paper unless we find a greater fool. While the Telengana region is expected to show demand improvement, not sure whether the company has any brand in market. Also, it would be critical to see local demand supply situation. Typical cement capacity are at least in 1 mn to be MES (with recent one are more in range of 2 mn tpa), against which the production of the company is 0.5 mn tpa which may be very close to mini cement.

Not seen valuation in EV/Tonne (Ambuja Etc are traded at around USD 170-200/ tonne EV), so the better way to calculate EV/tonne for the capacity. May also look at Dalmia Bharat and other mid size players to get more understanding.

Your thread was worth reading and points were very well highlighted (as usual, I can say because seen your work/note for almost decade now !)

Discl: I hold shares of Heidelberg Cement and my view may be biased.

Is not katwa looking so cheap considering its expansion in comparison to panyam in same small cap space.

Discl: Invested in both katwa and panyam

Current capacity of Panyam is 1 MTPA. You should also consider about Rs 30 cr of advances from joint development agreement as networth, this is entirely their profit which will be recognized once the registration of the flats is done.

One of the critical this you have missed analyzing is on the statutory dues the company owes (apart from contingent liabilities), which is about Rs. 50 cr (direct taxes and unpaid power charges). I guess we should attempt to value the company at some market multiple and discount the value with this Rs 50 cr of payables.

I am not too sure on their reduction in debt levels, if you look at bifurcation of FY15 debt, it consists of Rs. 30 cr or loans from group companies. I guess some of them are reclassified (probably as other current liabilites which increased by about 25 cr)

disclosure - i have exposure around the same level Rs. 60-62.

Announcement also includes 98 cr of debt issue, not too sure on the purpose for the same. Probably for the unfinished modernization project.

Generally these special situation funds ( edelweiss special assets funds) operate in the target investment returns of 22-25% IRR terms. Since the cement prices in south are due to pricing discipline, we are seeing all the players operating in the region are getting superior margins.

Since the region is operating around 48% odd capacity utilization levels, if the pricing discipline gets diluted then these kind of high cost debt might prove disaster.

Promoters do take on these high cost debt to do some kind of debottlenecking and wants to show higher rated capacity since an important parameter in cement industry for valuation is EV / capacity.

Company cannot mention to the exchange at this point in time. Coz though they are private placement (Investors prefer listed NCDs for - Lower tax leakages), they will be listed on the floor of the exchange.

The debt/equity ratio goes for a toss, rising to 5.78 times immediately upon subscription to the NCDs and warrants, and would reduce to 4.78 upon full conversion of the warrants assuming no more increase in debt.

This is alarming to say the least. The interest cost alone on the debt would be close to Rs 15 cr at 10% p.a. (which in itself is a very low rate for this kind of company). Their FY 2015 cashflow from operations itself was only RS 14 cr. Wonder where are they going to generate the cash to service this debt from.

Discl. same as above. Its an option stock for me since my allocation is v low. Watching how it unfolds.

Dec 2015 shareholding pattern. No change (improvement) from Sep in terms of promoter holdings and pledged shares. Am a little disappointed, as I was hoping the promoter buying and release of pledge would continue.

No new info. Just a confirmation that the company is considered a “distressed asset” and a distressed asset fund is investing in equity. As someone mentioned earlier, there is no info on the track record of the fund.

@varun88
you are right. Edelweiss is subscribing to the NCDs as well.

The company could have been a good turn around case but for the mismanagement of funds. So many inter corporate deposits to related parties and guarantees to related group companies. There are too many contingent liabilities for comfort. Hope better sense prevails and the company improves on Corporate Governance front.

that data is available on bse block deals. anyways the results were good no doubt but it has to sustain in quarters ahead and a strong breakout comes above 80 close.

In the interview in the beginning of 2017 MD had mentioned they will depledge 100percent in FY20 (2021) utilizing the Amaravathi cement demand. But the debt doubled to 136 (which isn’t for any asset it seems) and CF became negative…
Anyone still tracking this?