At first let me disclose that I am invested in this stock – it constitutes about 13% of portfolio. I am posting this to share my investment thesis, and also to receive feedback on the same.

Business model
NDTV is in the business of News and Media. They also have lot of online ventures such as NDTV.com, CarandBike.com.

Some of the Highlights

They also have lot of online ventures such as NDTV.com, CarandBike.com.

I noticed this was coming in improving metrics, but never researched further. Would you please list the online ventures they have and give an overview of all the major business activities apart from NDTV TV channels? Among TV channels, how many many are operated by NDTV?

A good idea in general when investing is to go through rating agencies reports. From the recent CARE report:

One should keep in mind that NDTV is actually controlled by Ambani. No view on the stock. SEBI findings suggest that VPCL, owned by Mahendra Nahata, a member of RJio board, may hold the reins at the media company

So NDTV was caught indulging in an online donation fraud in the name of children affected by Coronavirus pandemic!

Both UNICEF & Childline India Foundation have denied any association with the donation campaign @ndtv is running in their name. 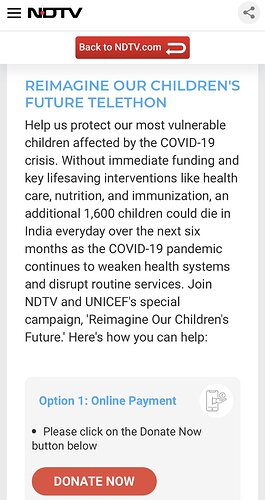 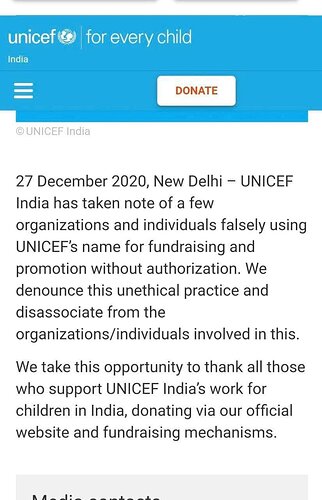 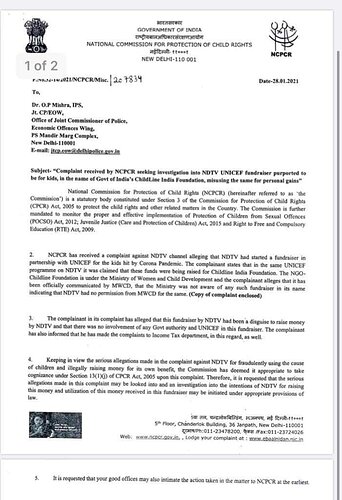 @WordsSlay
So NDTV was caught indulging in an online donation fraud in the name of children affected by Coronavirus pandemic! Both UNICEF & Childline India Foundation have denied any association with the donation campaign @ndtv is running in their name!

NDTV accused of faudulently using UNICEF's name to raise funds in the name of...

In his letter to NCPCR, the complainant has alleged that the purported fundraiser initiated by NDTV was nothing but a fraudulent way to use cause of kids to illegally raise money for its own benefit. | OpIndia News

NDTV has declared their results and they are the best ever!!
Also, out of last 12 quarters NDTV has recorded profit in 10 and losses were marginal in 2 quarters.

Has the tide turned? Is it a turnaround story?

NDTV Group's Best Result In Over A Decade; TV Has Highest-Ever Profit

With a profit of Rs 70.9 crore, the NDTV Group is declaring its best result in over a decade for the financial year ending March 31, 2021.

Disclaimer: Invested in the stock for more than 2 years now!!

NDTV Convergence Limited, a subsidiary of the company, is set up to use the synergies between television, Internet and mobile. NDTV Convergence owns the digital media business of the group and controls all NDTV websites, including NDTV.com

In the last few years, there have been several structural, transformational changes in the company.

There has been large-scale debt reduction.

They have taken cost-cutting measures.

They have divested their 45.56% stake in the loss-making business, Fifth Gear Venture.

They have also decreased debtor days, by making provisions for and writing off bad debts, as well as improving collection efforts.

Recent financial performances, too, have been best-ever with highest-ever revenues and profits.

A penalty has been imposed on promoters: “The Securities and Exchange Board of India (“SEBI”) had issued a notice dated 5 September 2018 to Dr. Prannoy Roy, Mrs. Radhika Roy and RRPR Holding Private Limited (Promoter Group Company) in regard to alleged violations under Securities and Exchange Board of India Act, 1992 (“SEBI Act”) read with SEBI (Prohibition of Fraudulent and Unfair Trade Practices Relating to Securities Market) Regulations, 2003 and Equity Listing Agreement read with Securities Contracts (Regulation) Act, 1956 on account of alleged non-disclosure of the loan agreements entered in 2008 – 10 by – (i) the Promoter Group Company with ICICI Bank Limited, and (ii) the Promoter Group Company and Promoters with Vishvapradhan Commercial Private Limited. SEBI vide its order dated 24 December 2020 imposed a penalty of INR 2,500 lakhs (INR 25 crores) on the Promoters and Promoter Group Company under Section 15HA of the SEBI Act, to be paid jointly and severally within 45 days of the receipt of the order and a penalty of INR100 lakhs (INR 1 crore) each has been imposed on the Promoters under Section 23H of the Securities Contracts (Regulation) Act, 1956, to be paid within 45 days of the receipt of the order.”

The key risk is of litigation and court cases.

Often times I have seen that in a dying industry, it is possible for cos to have high roce but low multiples. The valuation comes from optimism of investor which is negative for dying industries

Cos like ndtv, autoline, everready can be considered to be deep value or cigar butt type companies. Not that there is anything wrong in that style of investing but it requires extreme amounts of patience, triggers & deep expertise imho

Personally find it much more easier from psychological pov to stick to cos with some barriers to entry, barriers to scale, durable competitive advantages, and industry growth (tailwinds). Ndtv has lost all these advantages. Ndtv revenue is also directly tied to their viewership which is itself cyclical depending on the flavor of politics (republic TV would dominant when RW politics dominante & ndtv might when LW politics dominantes). Personally don’t have expertise to predict cycles in politics which also makes ndtv a risky net (setting aside fact that ndtv ownership itself is politically motivated).

Hostile takeover of NDTV is being attempted. The open offer will be aimed at acquiring another 26 percent stake in NDTV, said AMG Media Network, which is owned by Adani Enterprises.

NDTV: Exercise of rights by VCPL was executed without any consent of founders

The clarification came shortly after AMG Media Network said its affiliate VCPL will acquire 29.18 percent stake in NDTV and launch an open offer for another 26 percent shares.

After 3 years invested into the company, i exited since Adani’s have taken over last free media company in the country. But this was truly a multibagger with more than 11X return. What are others doing? Are they exiting or staying put?