Set up in 1981 in Hyderabad company is an R&D focused pharma company with 5 manufacturing facilities. It has > 3000 employees. Natco is into finished dosage formulations and API. It also does job works, pharmacy and others.

Natco is known for challenging patents in India and in 2012 became the 1st company to win a compulsory license from Bayer for its patent protected anti-cancer drug Nexavar.

Oncology accounts for a major part of company’s domestic formulations revenues. Post recent launch of Hep C drugs in India (license from Gilead to manufacture and sell the Hep C in over 100 countries) the revenues have grown strongly and expected to grow further

On the exports Natco has limited presence in US US. Export to US today is just 10% of sales. Natco partners with globally pharma companies to address US market.

Exports ex-US (EU, Brazil, Venezuela and RoW, with presence in over 40 countries) accounts for 15% of sales and mainly includes .

60% of Natco’s ANDAs are backward integrated. Natco has a portfolio of 38 niche ANDA filings in the US including 16 Para IV filings and 31 USDMFs filings 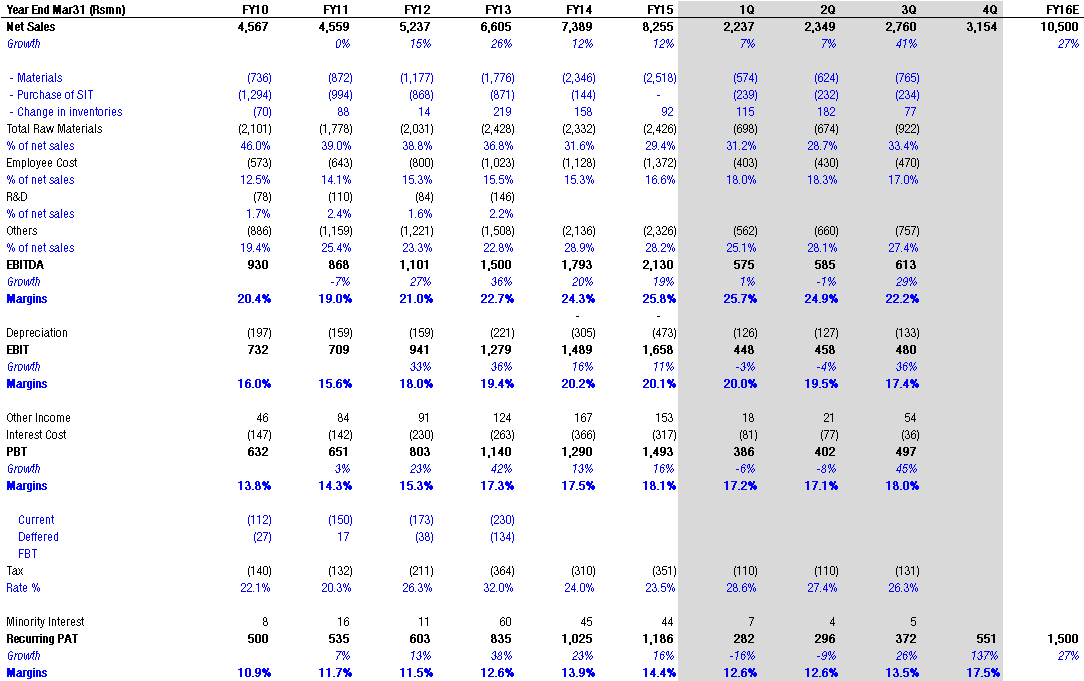 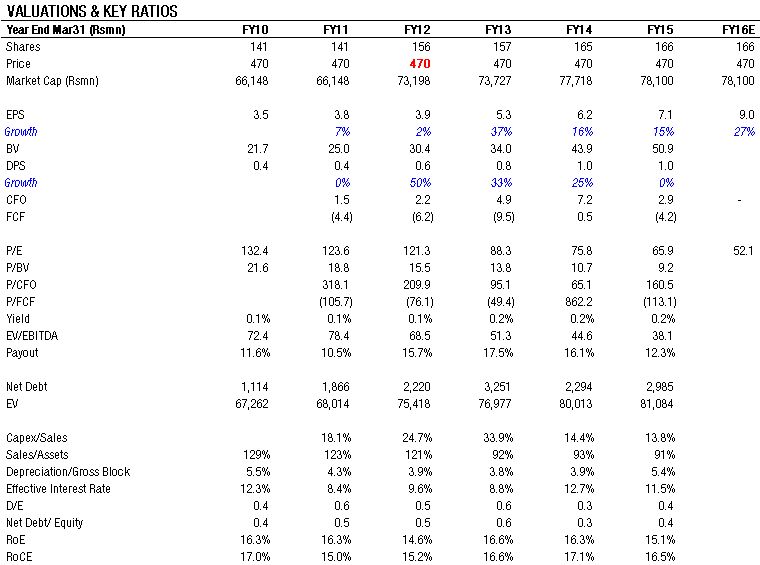 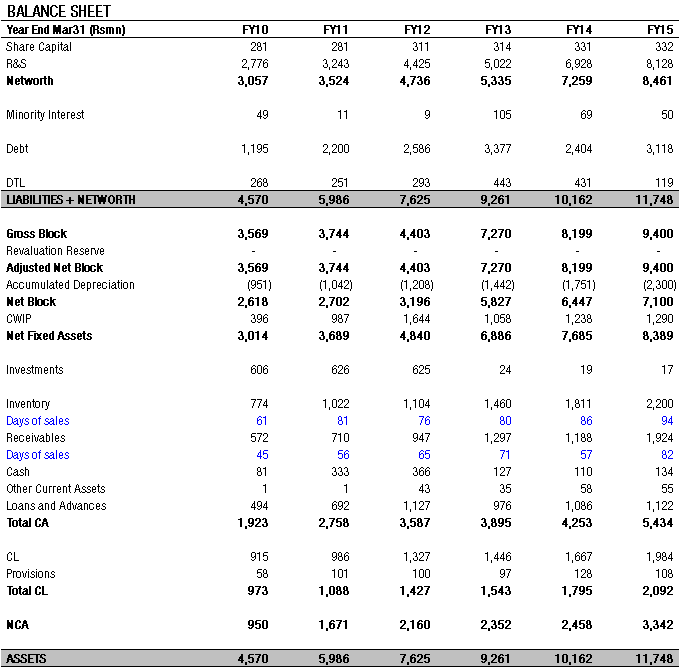 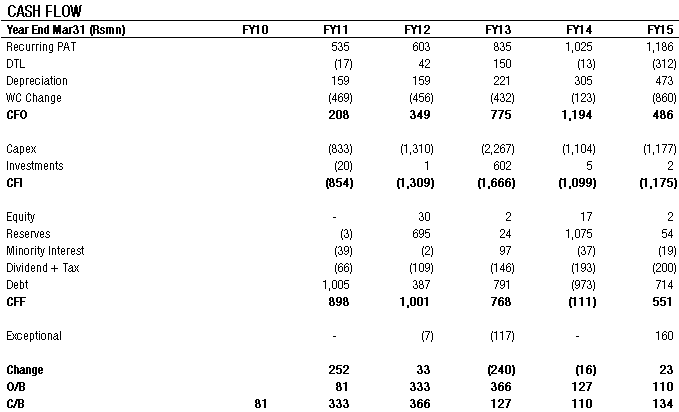 Based on personal experiences in my day to day dealings with my patients, I feel this company holds a lot of promise.

It has a niche in Oncology and Hepatitis C segments. Cancers are rising by leaps and bounds and we have a very significant amount of population who can barely afford treatment of cancer. Natco has many Oncology drugs, both in chemotherapy and targeted therapy as also in hormonal therapy. For some Targeted Therapy drugs, the cost of those produced by Natco is less than one tenth to one twenty fifth of the research molecule. and many of its drugs have been approved by committees in major cancer centres, even in Tata Memorial Centre. When we are faced with deciding a brand to prescribe chemotherapy, the first thing that we have to consider is whether the patient has insurance. If yes, well and good. If not, we try to prescribe them cheaper medicines. But with being cheaper, we do not wish to prescribe non standard companies whom we cannot easily trust. In this situation, we have ten to fifteen names of Indian companies which are reasonably good and trustworthy and Natco is one of them. Even the Hepatitis C treatment is a niche segment, with barely few companies into these drugs. If you see the projections of cancer, the future market is huge. And a company like Natco, which has a good outreach with economically priced drugs, has a good outlook.

I am sorry for my very non technical language. This forum has helped me a lot. But because of my zero knowledge in technicals, I cannot reply much. So I try to share at least where I can.

Disclosure 1: I am invested in Natco. Purchased some 250 shares recently, when it received FDA warning, and price tanked to 393.
Disclosure 2: Many of my colleague Medical Oncologists very regularly prescribe chemotherapy drugs from Natco and are reasonably satisfied using them.

@snowprince that is valuable feedback from a doctor.

I guess most valuepickrs have latched on to Shilpa Medicare early to play the oncology opportunity. That is why no one has bothered to start a thread on Natco Pharma.

This is a very valuable feedback, Sumeet., specially for us non-medical people. 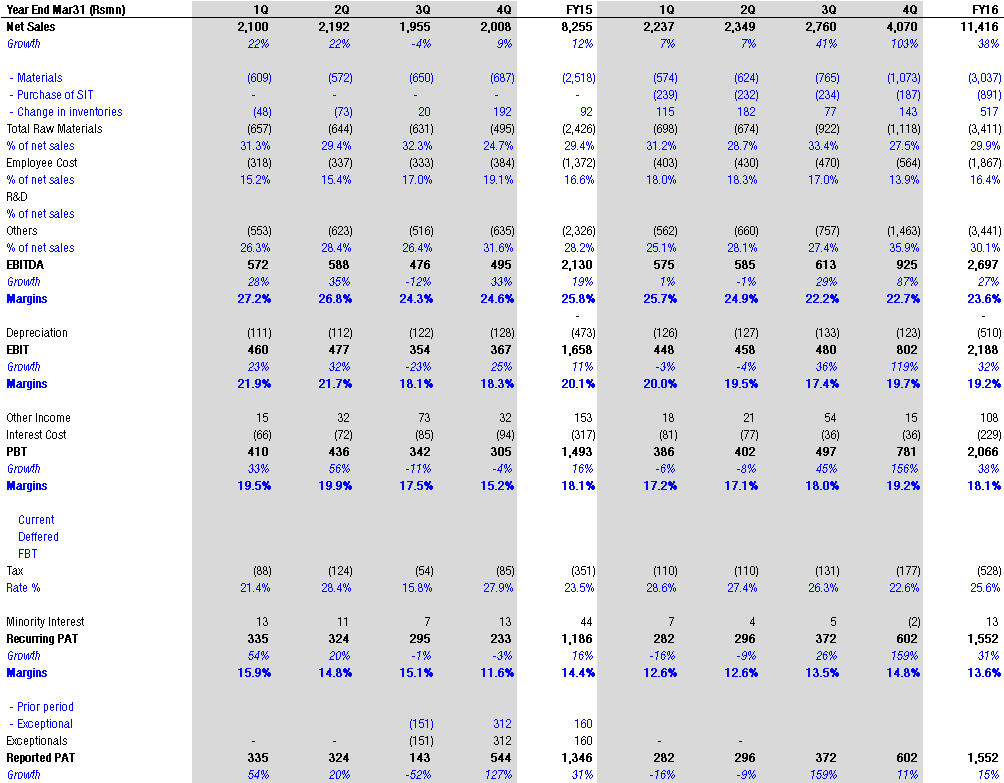 Stock up 9 percent on the back of this news. This facility Kothur had got 483s. Given the USFDA approval looks like this issue is behind us now

I read what I wrote earlier. Oxymoron indeed. And does not sound good.

Natco gets final approval for gRobinul (GLYCOPYRROLATE). The link:

It seems to be a highly competitive product with lot of competition. However, if news from CNBC are to be believed, the approval is from Mehboobnagar formulation facility which had received 8 483 observations in the last USFDA inspection in February - March. This approval clears the air regarding the USFDA related issues.

Very good growth company but expensive valuation. Hep C is driving the growth along with oncology currently.
In the future (4-5 years from now), lenalidomide is going to be a star performer for the company in my opinion. They have agreed to a deal with Celgene for gradual escalation of the generic lenalidomide sales in the US from 2022 onwards (I think).

Discl- already a 5 bagger for me, but I keep on pumping more

Natco Pharma has got the final approval of ANDA containing a paragraph IV certification filed with the U.S. FDA for generic versions of TAMIFLU® oral capsules (Roche’s trade name for Oseltamivir Phosphate), 30 mg, 45 mg and 75 mg.
NATCO and its marketing partner Alvogen are the first generic players to receive this approval. Earlier in December, 2015, NATCO and Alvogen settled a patent infringement with Gilead Sciences, Inc., Hoffmann-La Roche Inc., F. Hoffmann-La Roche Ltd. and Genentech, Inc. Under the terms of the settlement, NATCO’s partner Alvogen will be able to market the oseltamivir phosphate capsules before the expiration of the pediatric exclusivity period listed in FDA’s
Orange Book for U.S. Patent No. 5,763,483, which is February 23, 2017.
TAMIFLU® oral capsules had U.S. sales of approximately $403 Million for twelve months ending December 2015, according to IMS Health.

Reproducing their excerpt from the above results PDF:
“Hyderabad based NATCO Pharma Limited (NSE: NATCOPHARM; BSE: 524816) has recorded consolidated net operating revenues of INR 325.22 Crore for the quarter ended on 30th June, 2016, as against INR 223.71 Crore during the same quarter last year, reflecting an increase of about 45.4%. The net profit for the period, after tax and minority interest, on a consolidated basis, was INR 47.65 Crore, as against INR 28.07 Crore same quarter last year, showing a growth of 69.8%. The growth for the company was predominantly driven by increased sales of its oncology and hepatitis C products in India.” 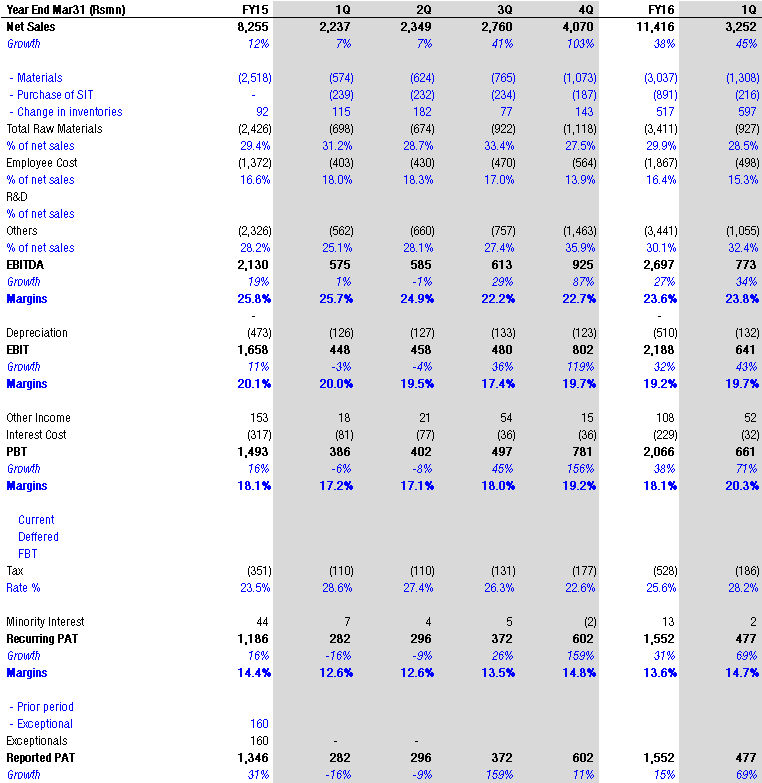 NATCO Pharma Limited (NSE: NATCOPHARM; BSE: 524816) is pleased to announce receipt of successful Establishment Inspection Report (EIR) from the U.S. Food and Drug Administration (FDA) for the inspection conducted, during the period February 8 – February 12, 2016, at its Chemical Division, Chennai, India (named NATCO Organics Limited, prior to amalgamation into the company)

A U.S. court ruled against two patents of Teva in the Copaxone case. Copaxone is a combination drug of four amino acids currently used to treat multiple sclerosis in patients. U.S. court invalidated two of the patents protecting Copaxone on Wednesday. Mylan NV had petitioned the court to review three patents held by Teva for Copaxone. Natco Pharma has partnership with Mylan to supply Active Pharmaceuticals Ingredients or APIs for U.S. market. Copaxone brings nearly $4 billion in annual sales to Teva.

Natco awaits final drug approval from U.S. drug regulator for generic 20 milligram which went off patent in 2015.
Teva said in a statement that it plans to appeal to the United States Court of Appeals for the Federal Circuit.
Mylan said it believes it was one of the first to challenge the patents at the U.S. Food and Drug Administration, so should receive 180 days of marketing exclusivity upon regulatory approval for 40 mg injection. Teva is defending the patent for this version that extends till 2030. The ruling is a positive for Natco Pharma and Dr Reddy’s Labs, both of whom have filed for 40 milligram Copaxone.

Teva Pharmaceutical Industries Ltd. had a third patent on its top-selling multiple sclerosis drug, Copaxone, invalidated Thursday by a U.S. agency, a further blow to its bid to block generic versions of a drug that accounts for 20 percent of its...

This last week was district court’s hearing on patent protection about Teva’s Copaxone. The district court was to review the IPR ruling which had invalidated Teva’s patents on Copaxone.
Is anyone aware of the court proceedings and what was the outcome? I tried to search with lots of keywords but could find only a few valid links: 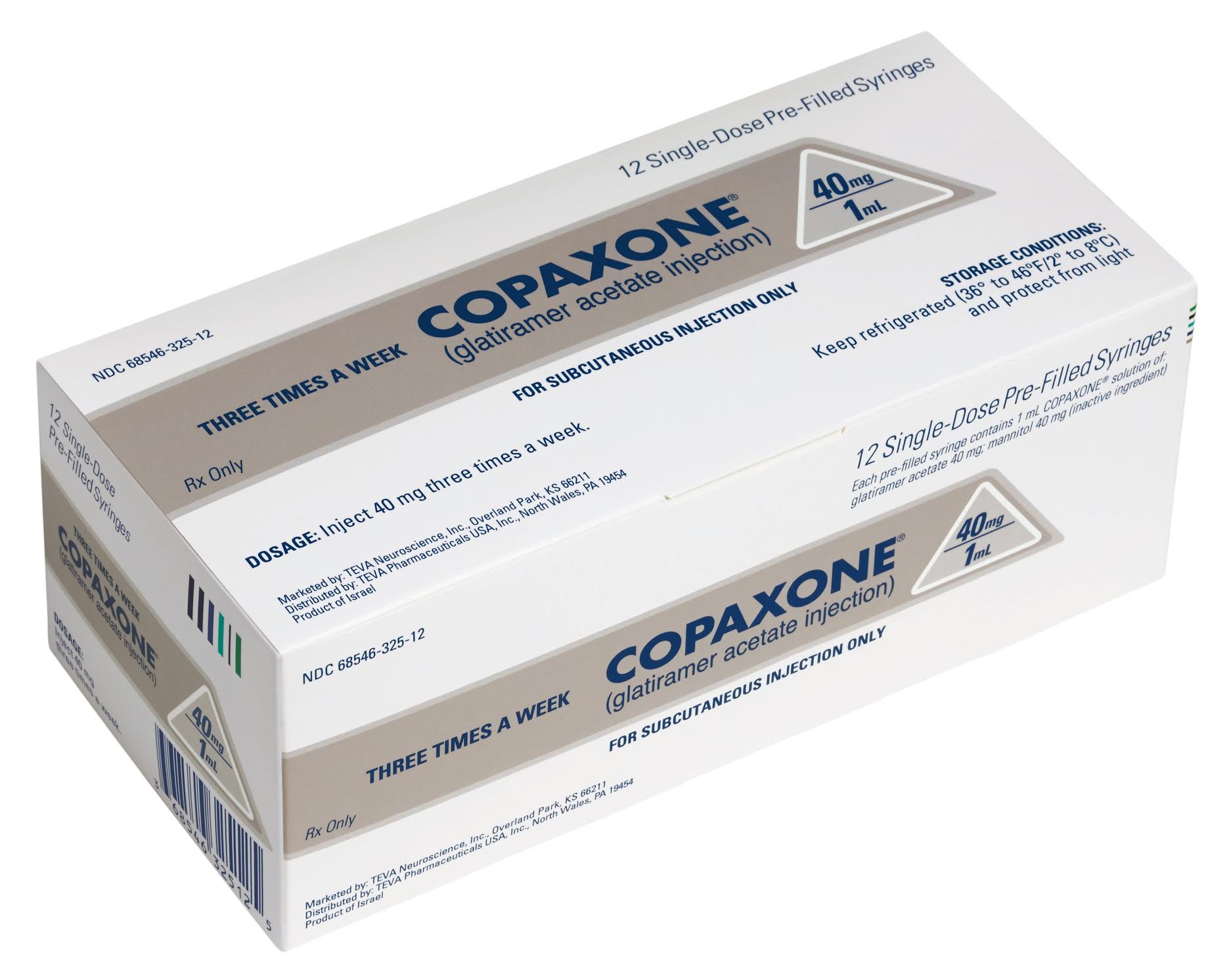 It’s Day 2 of the 7-day district court hearing over the patent protection on Teva’s 40-mg Copaxone, and so far, things aren’t looking great for the drugmaker. 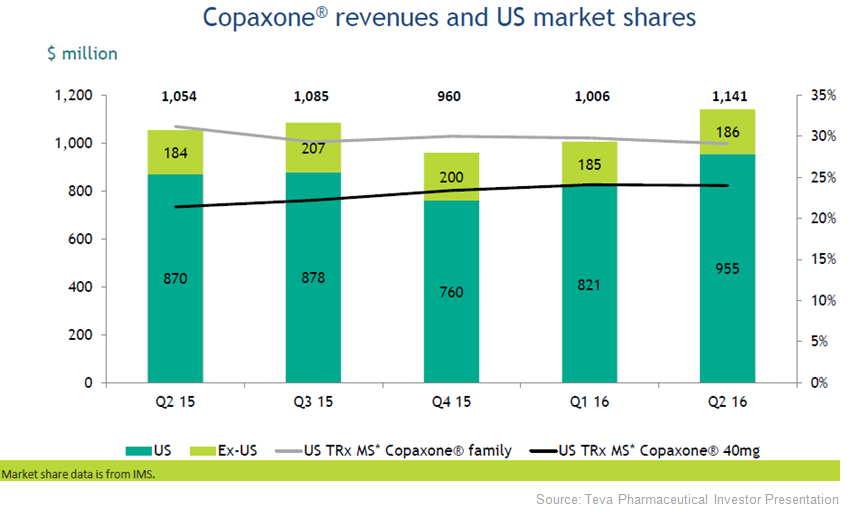 Will The Crashing Copaxone Franchise Spell Doom For Teva Pharmaceutical?

Teva Pharmaceutical can safeguard Copaxone franchise from generic competition even if it can uphold one of the two remaining patents. The judgement of the Distr

This second link, does mention that outcome may be announced in March 2017. I am still interested in knowing the proceedings. Does anyone have any idea about the same?

anyone tracking this lately? corrected a lot 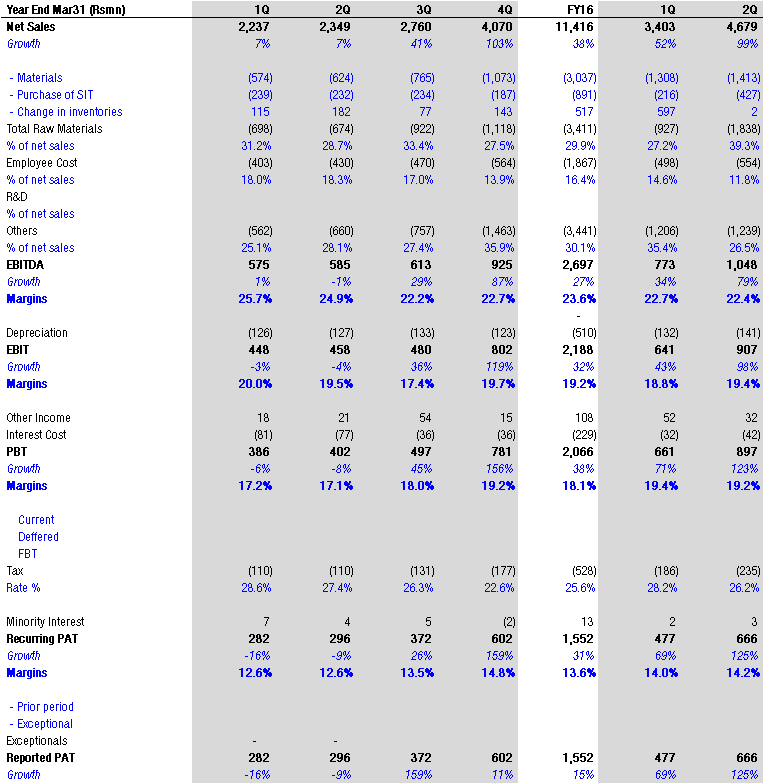 Impressive set of numbers. This is just the start.
If anyone sees the WHO charts on non communicable diseases and also charts on rise in incidence of cancers, it is disturbing. Cancer is on its way to even overtake cardiac mortality by next decade.
Natco, by virtue of its conservative pricing has a good market share in Oncology drugs and it will only get bigger.
Moreover, a significant part of revenue is coming from Hepatitis C segment. Oncology segment will slowly increase over time.
For anyone who can hold it for a reasonably long time maybe 5 years or even more, Natco should be able to show a steady growth quarter to quarter.