Have uploaded Sharekhan analysis on Narayana Hrudayalaya, what worry me is its a Offer for Sales (OFS) for promoters, raised money will not get infused in business.

In my opinion its a bit expensive on valuation. Listed player like Apollo Hospitals is available at cheaper valuation IMHO.

Hospital business in India is like liquor business. High margins and high capacity utilization at a unit level, but low RoE at a consolidated level. The bucket leaks for the benefit of the owners. Apollo is a great example.

you are absolutely right. When you get discharged and paying bill you realize how expensive is the treatment. they are looting public in the name of service.And show meagre PAT. where does all the money go?.
e.g. Simple blood sugar testing they charge Rs 90 to 180 depending on where you get admitted.Do you know the cost of doing blood sugar. Rs 10/. I do charge 40 for my patients in my own hospital. Most of labs do for 40-50. but Narayan Health charge three times and claim to provide cheapest rates in the country. you can check yourself.
They are all businessmen in the guise of Doctors 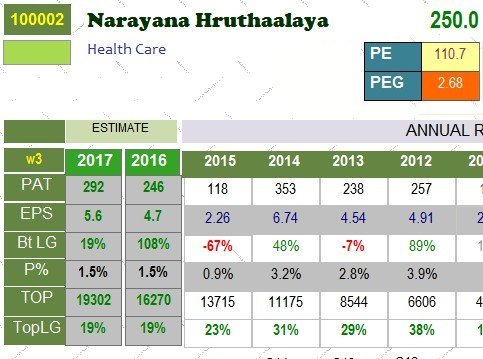 To me looks like it will be cafe coffee day like listing.Not much hype left …look to listing with interest. We can get it after listing at good price I suppose,provided all investing
parameters r ok.I will wait n watch.We must not depend on Devi Setti
image…

I have penned down my understanding of Indian Healthcare Services Industry and it’s Business Economics as first post on my new blog Rational Side of Pendulum. I wanted to share so that anyone interested in Healthcare Delivery business can benefit from it. Please click here. I am looking forward to any questions/comments.

Discl: I am bit new to investing and don’t have much expertise on investing or health care sector.

I believe, Nobody can tell with authority why the stock price is rising or falling in short term because too many things come into play in short term. An illiquid stock may go up substantially just because some HNI or mutual fund is buying and vice versa. Sometimes it could be that investing community expects a bad results from company, so the price could come down before results itself. Lot of time, the Market is right and lot of times it is wrong. You got to do enough research that with your own conviction you should be able to hold the during these big falls and also euphoric shoot ups.

The company might have a bad quarter. I believe at around 300 rs, the stock was bit expensive with slightly less margin of safety. With the growth rate it had past few years, it could have caught up with valuations. So, investors might have been waiting for that to happen. The mutual fund reorganization and FII outflows could have had negative affect too. But this is all guess.

The investors need to keep track on how the new branches doing over next few quarters, which should help with EBIDTA margins. If the growth is good and EBITDA margins go up even 0.5 to 1% and if debt is under control (keeping the money debt used for buying the caymen islands hospital aside), then the price may rebound quickly.
-ves:

Discl: Not invested yet due to lack of margin of safety. The current price is attractive, so evaluating swapping with one of the stocks in PF

Any reason why, the company warrants such a high P/E of 94 ?

It may not be a good strategy to invest in a hospital biz which is in growth phase solely looking at PE as it would appear depressed till it reaches stable phase. If you still look at PE then u shud be able to estimate a PE much late into the future which isn’t easy.

PE is suitable for stable businesses with estabilished asset turnover, margins and growth. So, PE as a metric not suitable for businesses which does not have these stable characteristic. In NH case, due to significant mix of new vs old hospitals and nature of business, it takes hospital by hospital to attain optimum asset turnover and margins and hence PE is not the right way to value.
Look at their matured hospitals EBITDA per bed , caped per bed, hospital distribution by age and need to build reasonable estimates of optimum occupancy , margins n EBITDA per bed n then on matured scale can do a EV EBITDA type valuation and then check if they do better return on capital, growth , mgmt study n decide if u want to give a discount or premium to that 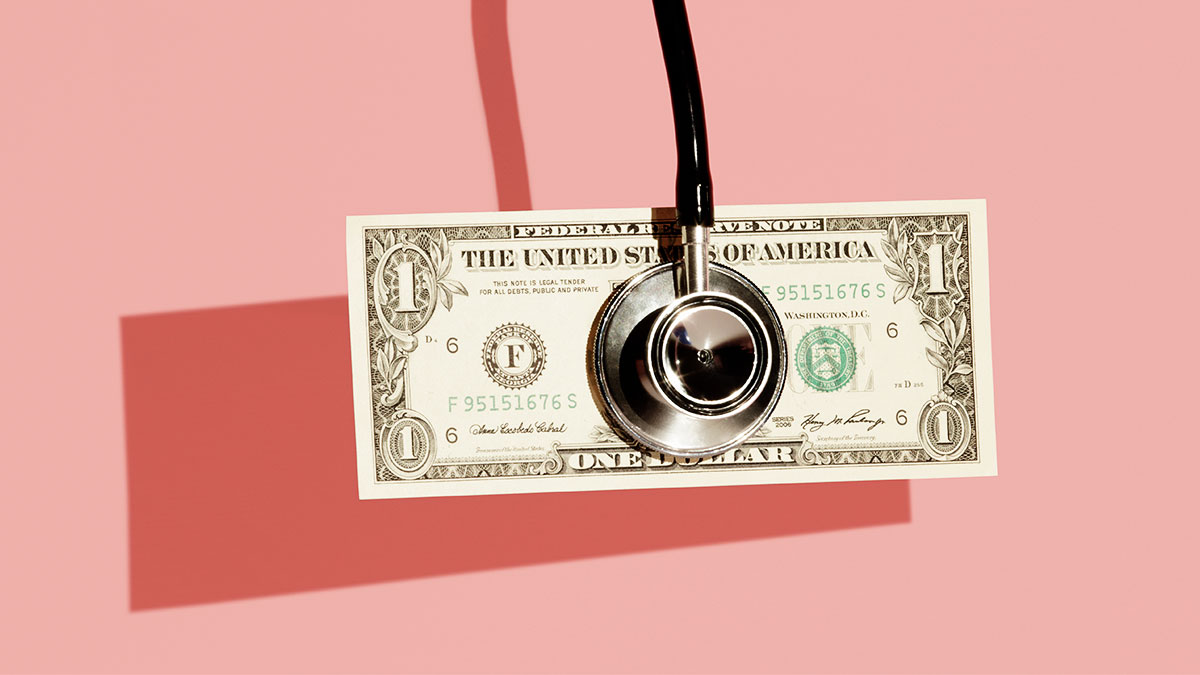 Is This the Hospital That Will Finally Push the Expensive U.S. Health Care...

Not all is well with India's corporate hospital chains

Indias corporate hospital chains are faced with heavy strain on their financial health, thanks to spiraling costs and regulatory controls on pricing.

Hi Saurabh, Is there a way to check if company has taken debt in current financial year ?
The interest payments look significantly higher.

I have done some detailed research on NH. They do have a grand vision but fell short on execution. I have replicated my write-up below. It can also be found on my blog - https://rarecinch.com/2018/12/28/narayana-hrudayalaya-building-an-affordable-model-of-healthcare-at-scale/

Hospitals provide a necessary service and are hence relatively immune to economic cycles. On the other hand, it is a highly capital intensive business and is inherently riskier to that extent. For capital intensive businesses such as hospitals, the capital expenditure required is more than the cash generated from operations especially during the growth phase of the business. Most of the hospital chains currently in India are in their growth phase and hence have negative free cash flows as can be seen from the table below. Kovai has a positive cash flow as they derive a majority of their revenues (88%) from one single multi-specialty hospital.

Because free cash flow is negative for all hospitals except Kovai, these companies will need to raise outside capital in the form of either debt or equity to bridge the gap. Too much of either is not a good thing for a business. Hence, for capital intensive businesses, it is generally a good policy to be disciplined and expand in a calibrated manner so as to minimize the need to raise outside capital.

Also, as most of the hospital chains are in growth phase, their current profitability is diminished and is not a true reflection of their steady state profitability. That is because when you start a new hospital, all the capital and operational expenditure has to be done upfront to build the hospital. But the revenues in the initial few years gradually build up as patients learn about the new hospital and footfall gradually increases. Hence new hospitals operate at a loss in the initial few years before they reach maturity and start generating profits. Hence a better approach to understanding their business efficiency is through their cash flows.

First of all, we need to understand where their cash is coming from. Majority of the cash will come from business operations, debt and equity. The table below provides the percentage of cash flow coming from each of these sources.

As we can see from the table, Narayana Hrudayalaya (NH) is getting more of their cash flows from operations and as compared to either debt or equity in comparison to their peers. (Kovai is not relevant here as they have limited capex requirements as they are operating just one major hospital.) As discussed above, NH has been the most disciplined in raising outside capital. As a result, we would expect their growth to be lower than the peers. Let’s have a look at their growth. The table below provides the revenue CAGR for select hospitals.

So, from the above figures, we can see that NH is indeed running a tight ship. They are generating more cash flow from operations per unit of capex when compared to their peers. As a result, they are able to grow their business at better rates even though they use lesser outside capital.

Finally, because they use lesser debt, they are able to reinvest majority of their cash into the business. The table below shows the percentage of cash outflows for capex, interest and dividend.

The macro picture for NH is better than peers. But how are they able to run a more efficient organization and be more disciplined than their peers. To understand that, we will need to get an understanding of the micro picture.

The results are due to their strategic choices. For NH, their strategy is to provide healthcare services at affordable cost and at scale. Two keywords here are – affordable and scale. In their own words – “Affordability is the epicenter of the group’s strategy.” On an average, NH charges patient much less than their peers. The image below provides average revenue per occupied bed (ARPOB) for select hospitals.

At NH the doctors work on a fixed salary. At most other hospitals, part of the compensation of the doctors is linked to the amount of revenues they generate. This gives rise to lot of malpractices because it creates a conflict of interest between what is good for doctors and what is good for patients. Charlie Munger famously said – “Show me the incentive and I will show you the outcome.” In NH, because doctors work on a fixed salary, they have no incentive to prescribe unnecessary tests or procedures for the patients to earn extra money. That completely eliminates the egregious behavior prevalent at other hospitals. But, this also means much higher fixed cost during the starting phase of the hospital.

The second cog of their strategy is scale, and the results here have been mixed.

Their vision is to have 30,000 rooms across their hospitals (current bed 6,228 operations beds as of September 2018). The vision was announced in 2012 and to be reached within 5 years i.e. by 2017[5]. They have fallen short on that measure by a huge margin. They plan to reach the vision by having 2,000-5,000 bed health cities in multiple locations. Currently they have a ~1,500 bed health facility in Bangalore and ~700 bed health facility in Kolkata. These are also their oldest facilities which are doing very well. Together these facilities comprise ~50% of their total revenues from India. Based on their experience, their vision was to have similar facilities with 3,000-5,000 beds in other parts of India. However, they have not found same success in other parts of the country. They have tried and failed in two locations – Hyderabad and Ahmedabad.

NH has failed to replicate the success of their first two hospitals in Bangalore and Kolkata elsewhere. However, despite the setbacks it is still one of the most efficient hospital chains in India. The vision of NH is to provide affordable healthcare at scale without compromising on the quality. This is a goal worth striving for especially in a country like India where majority of the population find it difficult to afford quality healthcare. But it is not easy and that is why almost all the hospital chains in India are focused on premium segment of the market. NH is trying and I think we should all cheer for them. If they are successful they will change the face of healthcare in India and perhaps globally.

In a separate post, I will look into the detailed financials of NH.