Music Broadcast Limited (MBL), which owns the radio channel Radio City, is a subsidiary of Jagran Prakashan Ltd. It operates radio stations in 39 cities across India.

The company earns its revenues mainly by advertising.

The company has seen sustained drop in revenue since June 2019 quarter due to overall economic slowdown in India. Adversiting is a discretionary expense and is highly correlated with economic activity.

In the Q4FY20 concall, the CEO mentioned that they have been facing pressure on revenues as well as collections (i.e. collecting billed cash) since October 2019. Q4FY20 was a washout quarter due to the impact of COVID-19 as 2/3rd of March had very low or zero revenue.

Due to economic slowdown in the past year, some categories like government, ecommerce, real estate, hospitality and travel have seen drastic reductions in ad spends. 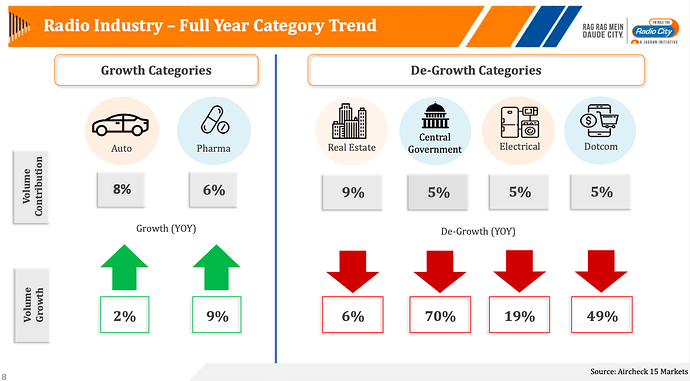 Company has reduced debt over the last few years and as of March 2020 is a completely debt free company. 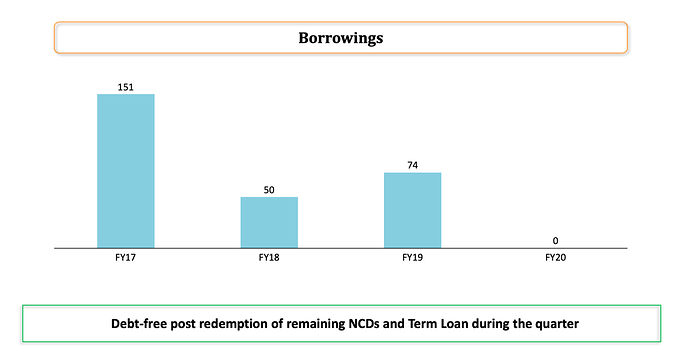 Advertizers started cancelling contracts from the 2nd week of March. The company is operating at around 15% of normal revenue during the months of April and March. Mumbai and Delhi revenues are severly affected. However with zero debt, good liquidity and reduced costs, the company is well placed to handle a pro-longed slowdown in revenues.

According to the company, radio listenership has gone up during the lockdown. However the advertisers are not spending money on marketing because shops & services are closed.

However I am not sure how they arrived at the market position, because Radio Mirchi is present in 63 cities across India vs Radio City’s 39 cities. So it seems Radio Mirchi is a market leader with Radio City at no. 2 position.

The radio industry has grown at best at 10% even in the best economic times. My main valuation driver is extremely cheap valuations. Let me explain.

At 16 times earnings, the company may seem reasonably valued. However this does not capture the full picture. The earnings are highly skewed due to the surprisingly poor performance in Q4FY20. The company had a profit of -9 Cr in Q4FY20 due some one-off expenditures + write-offs (9.5 Cr) and impact of COVID19 for 2/3rd of March. The margins of the company are healthy at 30+ %. As the economic activity picks up, post COVID-19 impact, advertising spends will come back.

Advertisers have limited avenues to market their products - TV ads, newspapers, radio, digital marketing and promotional activites in malls. For local advertisers i.e. advertisers who want to target audience only in a particular city, radio and print are the only major channels of advertising. Print (newspapers) will go through a more prolonged slowdown due to the reluctance of people to accept physical deliveries of newspapers. IMO Radio & digital marketing spends will recover the fastest, if and when the lockdown is lifted.

Disclosure: Initiated a small tracking position. < 1% of my portfolio.

For my personal portfolio, I buy these statistically cheap cos. only on basis of cursory numbers analysis.

@shardhr Saw your comment on the Jagran thread. We can continue the discussion here. Curious to know why you think the valuation is cheap?

Also major competition can come from internet streaming radio stations in the future. Look at the US market…

Thanks for the detailed analysis. ENIL is the listed entity for Radio Mirchi and yes they are the market leader with Zero debt and 40% higher market cap than MBL at similar valuations. Overall industry is facing very strong headwinds and in my view, it is a good contra bet but with some serious short term pain before the industry gets in vogue.

ENIL is the listed entity for Radio Mirchi and yes they are the market leader with Zero debt and 40% higher market cap than MBL at similar valuations.

Thanks for pointing this out. Have corrected my post. ENIL has not come out with Q4 results yet, so valuations (PE) not comparable yet. I agree that it is worth having a look at ENIL as well.

This is how I found this statistically cheap.

At the company’s ttm operating earnings this gives a multiple of around 15. However, these earnings are depressed considering the current scenario. A more normalised earnings will mean the EV @ 10-12 times, which is reasonable.

Few other factors to consider :-

Disc:- Holding. About 3% of portfolio.

Does the revenue and profit numbers include the earnings from reliance broadcast network limited? When is the acquisition expected to complete? And is there any chance of increasing debt to pay off the remaining part of the acquisition? Sorry I am a newbie ti the industry. pls guide

My take on the results:

MB has reported a loss of 13.9 crores. However their cash reserves have increased to 238 crores in this quarter - thats more than 40% of their market cap! The listenership has also increased and share of ad revenues has increased as well compared to competition. Plus they’ve got a large chunk of new advertisers.

All this indicates that they will survive the downturn and will bounce back very strong as soon as brands start advertising again. In the meanwhile, it is possible that many of their competitors fail and shut shop under increasing debt, which will further consolidate Music Broadcast’s position and profitabilty.

Disclosure: Holding a tracking position. Will likely add more after the con call today if the commentary is reassuring

Ms Purohit has sold 25 lakh shares in the past few days according to the disclosures to the exchanges. Not sure why, with all the positive commentary around the business. How many shares does she now hold?

Ms. Apurva continues to hold 65 lac shares as earlier. Could you pls share the source where you got this information on sale of shares by Ms.Apoorva Purohit

This seems very odd…to sell large qty at almost distress/low valuations. Ceo herself doesn’t seem to be confident of the business recovery? Would be helpful if she clarifies reason for sale on next earnings call.

And whats most interesting is that she seems to have sold these in the open market, and throughout this period the stock has rallied quite a bit with high volumes.

In fact if you’d look at the weekly chart of MB with volumes, you’ll notice that the volumes of shares traded in each of the past 8-10 weeks are disproportionately (read over 10x) times higher than any preceeding week. And each week has been a green bar. So it looks like a robust accumulation pattern with steadily increasing share price. With this scenario playing out, for her to sell so many shares is strange to say the least.

I believe this sector should be avoided. Principally following reason. Audio streaming apps are killing radio. One might argue people like to listen to RJs but, over killing with ads and a better product, cheap internet is robbing radio stations of listners like crazy.

The cash on book might appear to give positive assurance, but I remember similar case with HT Media, with cash on book and positive earnings. The stock kept on tanking while appearing cheap from all angels.


BONUS to non promotor only

@HIMSHAH How exactly does this work? does this mean its a dilution of equity?

No they are giving preference shares , which will be redeemed in 36 months. . And that also only to non promoters. It’s very good move to reward shareholder. Read above notice it’s in details

Who is consumer for these companies. I think only folks tuning in sometimes are those driving in 4 wheelers. With google/apple auto and music on mobiles, I doubt if they have any chance to survive.

There was no reason for promoters to keep themselves out but they have sacrificed a big amount and truly rewarded others. Hats off for corporate governance, comparing with what happened in other extreme end like Electrosteel/Srikalahasti pipes.

I think media/advertisements may be finally coming out off dumps soon. Last few years have been very bad for the whole media sector as ad spending was cut due to demonetization, RERA, GST, COVID.