Why is MCFL worth looking at?

MCFL is a trusted known brand in North India for woolen wear. As someone who has lived in North India for a majority of his life, I can attest they make good products and there is significant demand in the winter season for their sweaters, cardigans and other knitted wear. The company is also into cottonwear for which it is not very well known, but the MC brand helps leverage some growth there too. As of now, both woolen wear and cotton segments are growing well. The business model of the company is captured in the below screenshot: 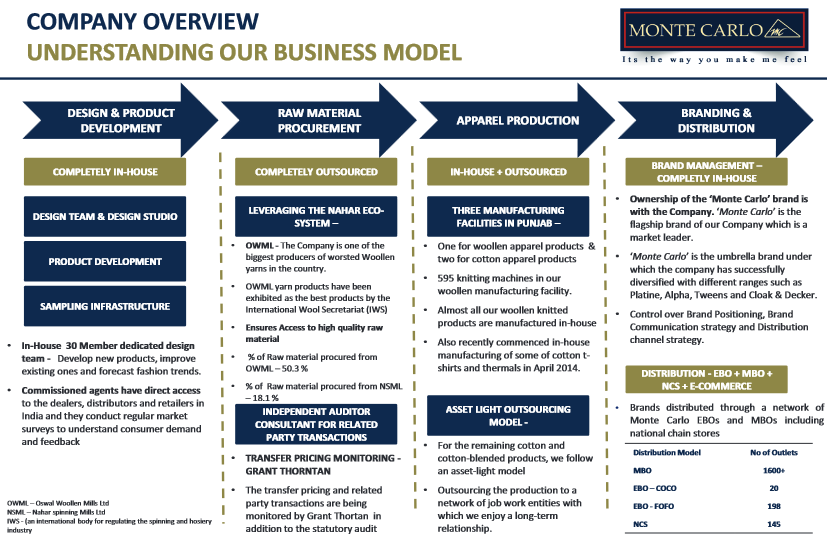 The segment analysis of revenue distribution is as below, taken from investor presentation: 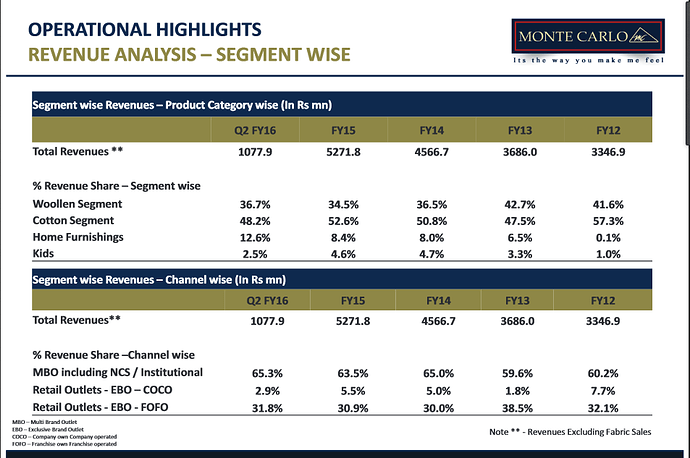 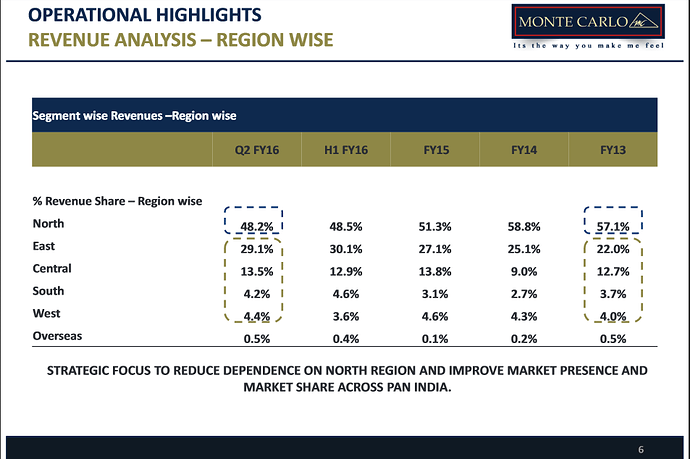 Is it a good entry point?

At a PE of 15.53, MCFL trades below other branded apparel stocks in the market. One that comes to mind is Indian Terrain Fashions Ltd, which trades around 18-19 PE and may trade higher eventually. I am not advocating a short term trade here, I just think this is a good entry point for a long term compounding machine.

This is my first thread here. Please bring any oversights of the posting guidelines to my notice, I will rectify as soon as possible.

Nice writeup. I have few concerns though, so please provide insights into below mentioned queries:

You are correct that 50% of sales are now from the cotton segment. I do not know the margin in this segment as segment-wise analysis is not available in the AR. It is likely that margins are decent. This is evident from the fact that in non-winter quarters the net profit is lower than Q3 but margins are intact(but they seem to vary a lot). Screenshot (there was an adjustment of inventory from June 2015 to Sep 2015):

I would say increase in debt is due to increased store openings. The stores have increased 10% over the last year. Also, the management has indicated in the investor presentation that the company is investing into marketing and advertisement. However, inputs welcome.

If the company is expanding in South and Central India why sales of Mar & June quarter in FY15 is less than FY14?

Quite nicely summarized. Here are my 2 cents

Above mentioned text raises more questions rather than answers. And for me, there used to be even more - when i was closely associated with the group for some equity related activity. Since then i have not tracked it & still at this price, it does not excite me. Wont like to elaborate more on this on a public forum - feel free to PM me, for any specific query - if you are really enthusiastic for it

Lastly - The things might have changed and i might not know. So i deserve the right to be wrong. Needless to say, no holdings

I would request you to at least do some research before asking questions. I have raised an idea here and hope for inputs, not an interrogation and one way flow of information.

To answer your question, June quarter there was an adjustment that led to sales being booked for September quarter. The Company indicated the profit for September would be higher on this account and this was correct.

March quarter the revenue dipped due to change in the way sales are booked.

The company is putting TV commercials. But the commercial has no appeal. All the participants read actor/actresses are girls but all of them were non-Indian. I could not understand who were their target audience. Their TV commercial work is really lousy and proves @Mayank_7772 point that it is one of their businesses.

Hi I am holding Nahar Spinning for more than 2 decades but small quantity.The performance over the period is inconsistent or not constant.Above all, the promoters of all the 3 Oswal group companies are against the interest of the minority share holders.
1 Bindal agro oswal agro etc.
2 Vardhaman spinning, Varthaman Acrilic etc.
3.Nahar Spinnig,Nahar Capital,Monte Carlo, etc.
That is why all the Oswal Group companies shares except Monte Carlo are quoting very low P.E
Dis. Not invested/interested…

Highlighting some observations from the FY 15 AR:

Most of the sales is done on pre-order outright basis. Franchise model is asset light.

I think their working capital situation is not good. As they are generating good profit but where is cash flow. even in Fy15 they have generated cash of only Rs.22 crs against net profit of Rs.59 crs. that is lousy. so if anyone has any idea regarding management plan of reduction of working capital?

I think a large part of the cash flow gets impacted due to loan repayment. They’ve 2 major loans from PSU banks which are being repaid and most of the debt should finish by March 2018 I believe.

MCFL results are due on May 30 but I’m not expecting the Company to meet management guidance.

The management has been repeatedly giving a guidance of 10-15% growth, latest in Feb in an interview with CNBC.

Although it seems baffling that MCFL’s Q4 turnover was 1/5 of Q3 turnover considering winter wear sales remains steady atleast until end of February in North India.

Even at guided growth rate and steady FY15 OPM margin (as claimed by management), NP growth is ~25% assuming there are no shockers in operational costs. The Company trading at 15PE still appears overvalued.

On the short point on winter - winter in North India was exceptionally brief and relatively warmer than past years. So that is a definite impact on previous quarter.

Any view on Indian Terrain brand in B’lore?

I would like to avoid this because of the track record of the promoter group as mentioned by many they have eroded minority share holder wealth. so even if the company is growing if the management is not shareholder friendly there is no use in investing in it as we minority shareholders are totally at the mercy of promoters. I think it will be better to go with ABFRL as it has many brands and has pan india presence, yes it has high debt but they should be able to get through it, with sales of 6000cr they will soon find the ways to take care of debt. Promoters have to be shareholder friendly in any company we invest orelse there is no use at all

Its not a bad company - from what i can make out from the cash flow statement. However, over the last 5 years 80% of its cash flows have been used in the working capital & capex investments leaving very little to cheer. However i am enthused by the fact that its operating profit before working cap & taxes has been more than 20% of its net assets ( total assets less investments & cash ), which is a sign of a good company. Its a nice company and i think it will do well in the future for sure. Not Invested though 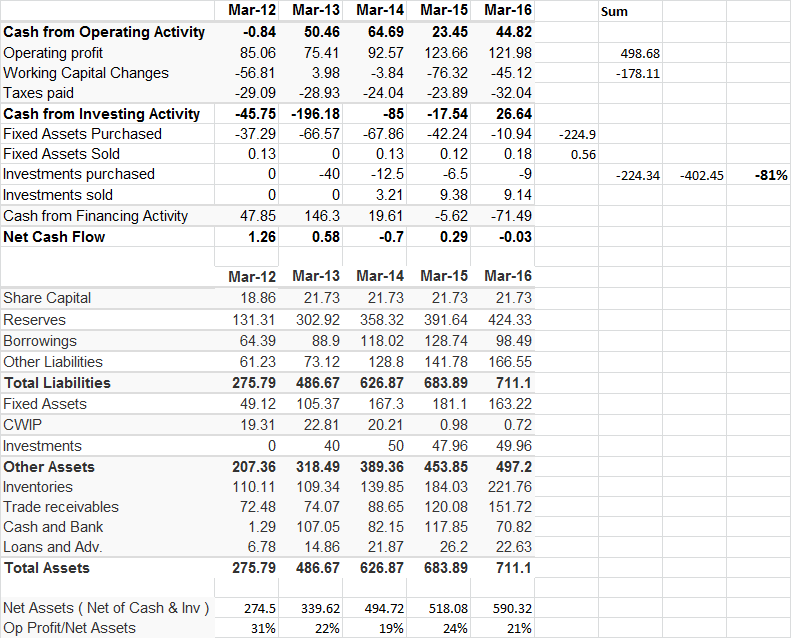 one more thing you can see is in the last 1 year promoters are buying shares from open market around 400rs range and till now they have bought stocks worth of 3 cr. so maybe its good , I dont know . I am not taking any risks as I am not comfortable with the promoters