Tata definitely has the first mover advantage in EV. Looks like most of the japanese and european automakers prefer hydrogen fuell cell, because of more cleaner technology, density and convenience. Need to watch, if it is complacency or better due diligence.

Wondering how much time or research is needed to change assembly line from Combustion engine to Motor and circuit? Can Maruti wait for these aggressive players to actually achieve some success and reserve its own aggression to bring new models when its sure of demand?

Secondly Lithium supply on earth is scarce and the mines are mostly controlled by Chinese firms. Unless batteries evolve to work on something else, can prices really come down? 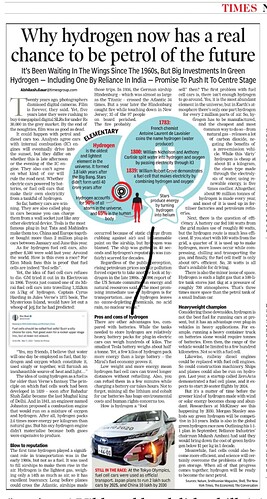 In today’s TOI. With challenges around coal based electricity production, this seems to be more promising.

This thread gives the reality of EV charging infrastructure.

Frankly saying, his experience was much better than my expectations. He did 1300 kms on an EV alone, at a cost of 2500 rupees only (petrol would have costed >10k). As the infra gets better, it would be even easier to drive these long distances.

It would obviously get there where we all would want.

But spending 4 hours to troubleshoot the errors for charging for 7 hours.

Sleeping in car at 3 AM while charging.

Taking detour for charging after every once in a while cannot be considered as a decent experience and we cannot take this adventure with family in the car.

even if there is infrastructure to charge batteries, if it takes 3-4 hours then for long routes EVs are almost useless??

This is one example in a state where the infrastructure is definitely sparser than a few others like say Karnataka. The question is at what rate the change is happening. I would say very fast. Just 3 years back no one would touch EV’s with a barge pole and now people are having actual discussions. For those who use 2 cars, one for short runs within the city like shopping, dropping kids to school, going to office and all the EV makes perfect sense as a second car. The long distance part would get resolved sooner rather than later.

It’s a chicken first or egg first puzzle, no new technology will come into existence without the that transition phase and its troubles.

A little long though a good read to understand the automobile sector and Maruti’s stance in the EV industry.

Is Maruti no more India’s First Choice? The Potholes in the Road Ahead |...

So, what was your first car? Was it Suzuki Alto/Swift or Hyundai i10? Well, we might not be very sure about it but one thing that we are quite certain is that the future of automobiles is Electric Vehicles. Recent showcase of the car “Avinya” by Tata...

In the current times, Maruti’s strategy to focus on CNG/Hybrid technology makes immense sense as it’s viable for at least a decade and Maruti has the secret sauce to make cars in that category, which are affordable to satisfy India’s major demand.

On the EV front, Maruti seems behind the curve at first glance, but might not be so considering the car’s manufacturing approach by the OEMs . Most of the car systems are outsourced except key areas such as Design, Chassis, Body [Sheet Metal Design], Powertrain and Engine.Considering Maruti’s hold on Indian market and design abilities, they can easily customize four of these factors - Design, Chassis, Body [Sheet Metal Design], and Powertrain as per the need of EV’s dynamics.

The last one, Engine, would be replaced by the battery technology. Whoever around the globe makes it affordable would end up supplying to most of the OEM’s including Maruti. I recall that Suzuki made a plant in Gujarat with a similar objective.

In my opinion, Maruti will enter EV category with a big bang as soon as affordability is in the ball park range. Till than, It will keep learning at the expense of it’s competitors without worrying too much about the market share.

Let’s see how this pans out.

But don’t you think, TATA being an aggressive player will get an early mover advantage? Plus Maruti being focused on CNG will be a short-term play. In the long-run competitive pricing in the EV segment will lead to pricing wars and with many new players, MS might lose the automobile battle

Though it looks balanced decision of going slow on EV, it could be there in the mid term plan.
After launching premium cars from 2013 onwards, OPM moved up close to 15%, and now have dropped to long term average of about 10%. ROE is also trending downwards due to low sales growth during pandemic, commodity inflation and increasing competition.

Considering that, some other manufacturers may have aggressive EV plans, MARUTI may need to relook its strategy as it could help to improve margins in the long term. Also, EV may emerge as mega trend which may span across few decades, and it would be worthwhile to start moving in that direction.

Also, Maruti need to relook at its design, safety, and looks of the interirors in general to make cars more appealing.

Once EV batteries will become more affordable and more charging statios / facilities would be available, there could be positive opnion about EV over a period.

Disc: Under watch list for some time. Due to low OPM and ROE, was not able to build conviction.

1.We are not electricity surplus country.
2.Imagine 10% vehicles shifting from petrol to electric…cost economics will
determine prices of fuel.
3.Prices of electricity will rise and market dynamics will determine price equilibrium…
4.Eventually we’ll find EV/Petrol/CNG vehicles around…

We are electricity surplus country.

In this ICE versus EV debate, we are projecting Indian future with using Western success of EVs as benchmark, but there are some very unique issues specific to India.

Govt tax collections will be loser with mass adoption of electric vehicles and no govt will accept it. Raising electricity tariffs or adopting stricter metering both are political hot potatoes.

Therefore how governments react to EV once it starts to pick pace is a big question mark to me!

In Summers many OLA scooters caught fire and EV Enquiries at EV Dealers dropped by 50%. Earlier this month Tata Nexon caught fire Tata Nexon electric vehicle catches fire, the exact cause of the fire is unknown | English News - YouTube Such incidents can reduce the demand quickly, we are not Europe and summers are very hot in many parts of the country. Lithium mining: What you should know about the contentious issue

Electric cars are significant contributors to climate protection – but the mining of lithium for the batteries is often criticized. The discussion focuses on the extraction of raw materials in salt deserts. Questions and answers. ...

The total global reserves are estimated at 14 million tons. This corresponds to 165 times the production volume in 2018. So if demand goes up exponentially, lithium will become expensive eventually. As a country we will just shift dependency from Oil to Lithium.

Maruti is treading waters carefully and I think its best approach, Unlike TAMO which goes on posting losses and increasing debt and won’t mind going bankrupt if things turn ugly.

Unless there is better innovation in Batteries and abundantly available metals like Aluminium could be used in batteries, there will always be overhang and higher risk.

Inflation will continue to take a bite out of profits.
Sales are expected to be good, but not the quarterly profits.

“We had an impact on commodities all across, including steel and precious
metals. The impact was to the extent of about a little less than 2%. And while we were able to partially
offset this impact with the price increase that we did and there was also some incremental impact of the
sales promotion cost being higher sequentially compared with fourth quarter in this quarter. So, that
broadly is the reason for the drop in operating margins that you see sequentially between quarter 4 and
quarter 1. Moving forward, we are hopeful of commodity prices cooling. It is difficult to give any fixed
guidance at this point in time because these situations vary, but we have more clarity on quarter 2 because
quarter 2 rates are fixed to quarter 1.”

The interesting possibilities in this stock:

In 2016 its OPM was 16%, now 7%. Once this inflation issue is done and over with, the profitability has a lot of headroom.

Sales are at all time highest. This will hugely contribute to profits.
My estimate we could see EPS going to 300 in the next couple of years. This process should start, as soon as the RM prices start cooling off.

There are news of Steel plants shutting down in Europe, this should further delay the process.

Sales growth of entry-level car like WagonR, Alto has declined during the past few years due to changing consumer preference. Maruti Suzuki Chairman R C Bhargava said that he does not expect these unit sales to grow in the fourth quarter (Q4FY23) or in the next FY.