Mahindra Lifespace Developers (MLF) is the Real Estate company of Mahindra group. The company benefits from the strong pedigree, brand name, trust and reputation of the Mahindra group. We also believe that over last few years, the company has shaped and executed its business strategy very well, positioning it for strong revenue and earnings growth, as well as market share gains over the coming years.

Speedy execution & even speedier sales: The company has diversified its portfolio well by taking-up multiple small to mid-sized residential projects across multiple cities (currently 11 projects are under implementation in cities like, Chennai, Delhi NCR, Nagpur, Pune, Hyderabad, Bangalore, Mumbai). The company’s project- wise data shows that it has maintained a consistent and relatively fast completion of the projects (4-4.5 years in Mumbai, other-wise 3-3.5 years across other cities), compared to other listed/ unlisted developers. More positively, the sales cycle has in 83% of the projects been even faster than execution cycle, contrary to industry trends. Even in a market like Delhi NCR, the company’s Luminare P-I project has sold 73% since 6 quarters of launch, ahead of completed 41%. This strategy of fast executionandsalesinourview istheoptimalstrategy,asithelpsthecompanyinrevenue recognition, inventory cycle (better than Oberoi, DLF), cash flows and profitability. Even more importantly, it helps in consolidation of the company’s brand image and create virtuous cycle of continuous fast growth and translate to market share gains.

For more check out the attachment below

Your content is not sufficient for the new thread on a company. Please put your work in detail by editing the first post itself. Till then this thread will remain closed.

Mahindra Lifespace Developers Limited (MLD) is the Real Estate company of Mahindra group. They operate in both commercial as well as the residential space. They have manageable debt on their books.

They are right now executing a number of residential as well as commercial projects.

Current situation of the sector:

Some claims by the company in their last con call on Oct 27, 2016. The transcript of the con-call is also attached below:

Mahindra lifespaces reported encouraging set of numbers for Q418 and financial year in general. Revenue reported was steady 180.6cr Q4 vs 185.6cr Q3. EBITDA margin increased to 48% Q4 vs 24% Q3 and 19% Q417. Revenue dropped significantly to 644cr FY18 vs 831cr FY17. Operating expenses reduced significantly. Debt to equity stood at 0.20 vs 0.38, with debt dropping from 25cr to 5cr. Board also approved 60% dividend on shares of face value 10 each. More details can be found here.

Agree, but you have to look at the number in the context of what is happening with real estate sector in general. Demand is low, small developers getting bankrupt due to various reasons and RERA is pain. In such condition, if you are able nearly double EBITDA margin and keep numbers steady, its great achievement. I was expecting debt and interest to go up for above reason, but it has actually come down. Going by the momentum, i think both premium residential and commercial office complex demand will pick up by next quarter. CEO of MAHLIFE already spoke on affordable housing ventures of the company and said the margin will be low. So, i think things are overall encouraging.

As a investor, i look at context of the business environment, business model as well as financial result to judge a result. So, that’s there. 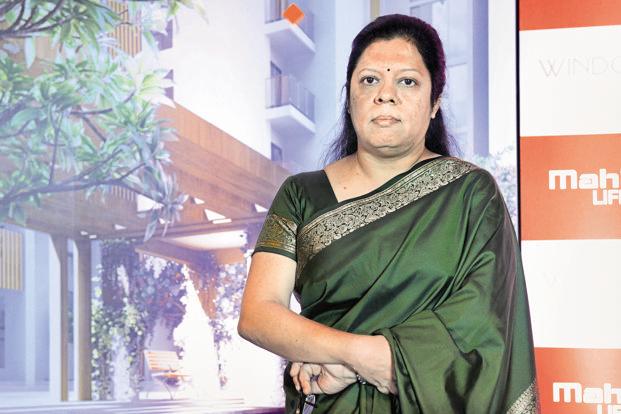 Mahindra Lifespace to launch 5 housing projects by next March

Mahindra Lifespace CEO Anita Arjundas says the new residential projects, with around 2 million of space, will come up in Mumbai, Pune and Chennai

It was undervalued and not all the development projects were in price. I think its fairly valued now.

Check out @CNBCTV18News’s Tweet: https://twitter.com/CNBCTV18News/status/1009342230388019200?s=08
Mahindra Lifespace commences pre-sales of ‘Roots’ in Mumbai. Sangeeta Prasad, CEO of the company says they are looking at a revenue potential of around Rs 200 cr. @life_spaces https://t.co/cw9adHokfM

Highlights from AR 2018:
• Company sold 1,357 units aggregating 1.16 million square feet of saleable area in 2017-18 against 863 units / 0.91 million square feet in 2016-17
• The Company sold 721 premium units in 2017-18 compared to 613 units in 2016-17. 636 units and 250 units are figures in Affordable segment for the two years. The premium segment includes all residential projects of the company, barring the three affordable housing projects in Avadi, Boisar and Palghar marketed as Happinest.
• The sales growth of 57 percent and 27 percent by area sold was achieved inspite of the Company having to defer the launch of three of its projects in Mumbai due to High Court related restrictions and two of its projects, one each in Pune and Chennai, due to pending approvals.
• The Bombay High Court placed restrictions on (a) granting permissions for new construction due to solid waste management issue in Mumbai, and (b) granting building height approvals in the funnel area of the airport in Mumbai.
• The Company handed over total 3846 units during last 2 years 2016-17 and 2017-18. This marked a significant uptick from the achievement during 2014-15 and 2015-16 when it handed over only 1364 units. It reflects company’s focus on execution.
• Company has launched a new brand of industrial clusters called ‘ORIGINS by Mahindra World City’. These are relatively smaller clusters - one near Chennai and the other near Ahmedabad. The former has received all its approvals and we expect it to get its first set of customers in 2018-19, and the latter is in the process of getting its approvals.
• Looking forward to launching five new residential projects on receipt of requisite approvals in 2018-19. The total estimated saleable area of these projects amounts to 1.97 million square feet.
• The Company is currently developing 3.97 million square feet with another 4.44 million square feet available in the form of forthcoming projects, new phases of ongoing projects and new projects that are in various stages of planning, for launch in the future.
• In addition to above, the Company has a landbank with a development potential aggregating around 10.44 million square feet, 91 percent of which is within Mahindra World City, Chennai.
• The Company seeks to grow its presence significantly in Mumbai, Pune and Bangalore and add to its presence in Hyderabad and NCR before exploring any other geographies.
• Integrated Cities and Industrial Clusters (ICIC) recorded 62 acres of land leases during the year, compared to 74 acres in the previous year.
• The Company will focus on increasing its deal pipeline and closures in the balance inventory of industrial land in Chennai and in leveraging the enhanced product-mix at Jaipur to add more customers in its DTA and multi-product SEZ.
• During the year, the Company expanded its post possession value added services that had been piloted in 2016- 17 — both, in terms of number of projects and types of services. These now encompass complete interior solutions, electrical fittings, lighting solutions and modular kitchens. Going forward, the Company shall further increase the bouquet of value added services available to customers.
• During the year, the Company entered into two partnerships. The first partnership is with International Finance Corporation (IFC), a member of the World Bank Group, for the development of multiple industrial parks across Gujarat, Rajasthan and Maharashtra. This entails an investment commitment of USD 50 million, with the first investment in Origins, Jansali — the 268-acre industrial cluster near Ahmedabad. The second partnership is with a fund managed by HDFC Capital Advisors Limited for projects in the affordable housing space, with joint commitment of Rs 500 crore that can deliver development footprint of 5-10 million square feet. Happinest, Palghar (I & II), in the Mumbai Metropolitan Region, which has an estimated saleable area of 1.05 million square feet, is the first project to be implemented under this partnership.
• Consolidated total revenue reduced from Rs 831 crore in 2016-17 to Rs 644 crore in 2017-18, primarily due to decline in project activity during the year and a one time revenue of Rs 176.71 crore through sale of land in the previous year.
• Operating Margins improved from 14.3% in 2016-17 to 21% in 2017-18.
• Residential Operations’ share was 79% in Total Income and 57% in PAT while Integrated Cities and Industrial Clusters (ICIC)’s share was 21% and 43% respectively.
• The average cost of consolidated debt reduced from 9.86 percent in 2016-17 to 9.49 percent in 2017-18.
• Finance Cost increased from Rs 20 Cr to 41 Cr due to less allocation to cost of projects.
• Legal and other professional cost (Other Expenses) increased from Rs 8.6 Cr to Rs 10.9 Cr
• Project Management Fees increased from Rs 12.7 Cr to Rs 28.5 Cr
• Income from Projects reduced from Rs 729 Cr to Rs 519 Cr
• The amount of inventories recognised as an expense Rs 37,344 lakh (31st March, 2017: Rs 56,589 lakh) include Rs 1,190.14 lakh (31st March, 2017: Rs Nil) in respect of write down of inventory to net realisable value.
• Current Trade Receivables increased from Rs 76 Cr to Rs 145 Cr
• The Company had entered into an agreement to acquire a parcel of land near Thane, Maharashtra, at a consideration of Rs 20cr. While full consideration was paid, the land was not conveyed pending completion of certain formalities. The amount currently standing in the books as a current assets is Rs 28079cr. Tahsildar (Thane) has issued an order against the registered owner alleging non-adherence of certain conditions pertaining to Bombay Tenancy and Agricultural Lands Act, 1948 and changed the land records to reflect Government of Maharashtra as the holder of the land. The Company has been legally advised that the said order and the demand thereunder is grossly erroneous and not tenable.

The whole idea is to create pipeline because with completed contracts coming in residential, revenues are become a lag indicator. It is only how company work to sell , to get completion done , to get land and turnaround it faster. So company focus is on LLCC – Land, Launch, Completion & Customer.

@smehta - Are you still tracking MLDL? I am trying to understand the business here especially with respect to the Integrated Cities & Industrial Clusters part.

Hi, Were you able to find any details on these points?

seems like a diverse business model. How this is going to effect the company in long term?