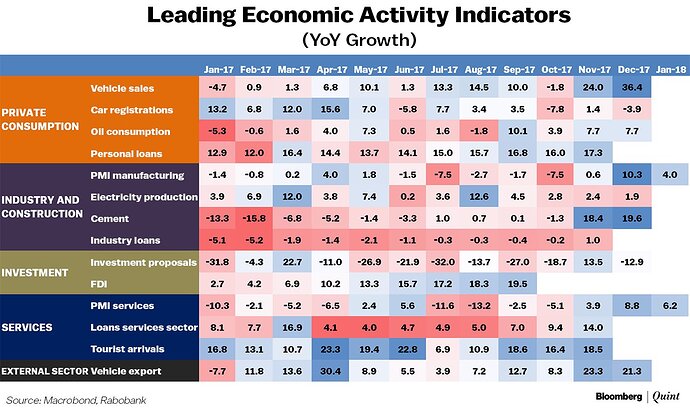 Thanks for sharing this. It is quite an interesting set of numbers and this is what I thought of it.

Vehicle sales is up but car registrations are down which indicates that commercial vehicle sales is on the up. This can be seen in sales of Ashok Leyland and also the CV segment of Eicher Motors which was a positive surprise. I think the driver could be GST mainly because of the logistics sector that’s going to see more business as selling and procuring across the country increases due to GST. Growth in oil consumption is also a healthy indicator of a growing economy. Personal loans has been growing healthily as the economic growth so far has been driven by personal consumption.

Electricity production I think is down because on the one hand we are calling ourselves a power surplus country while having a large section of the populace in the dark. Clearly the lack of demand comes poor infrastructure and last mile connectivity. Unless we fix the transmission and distribution infrastructure along with better policies in the renewable space, this is going to continue the same way. Economic growth without growth in power is a bit strange but then considering most big business these days have captive power, its perhaps understandable.

Cement growth substantiates the infra push while industry loans being down shows that capex cycle is yet to recover. This is understandable as we have unused capacities and no one is in a hurry to spend more on capex. Once demand picks up to use the built-up capacities and commercial banks clear up the NPA mess, we will see growth in the industrial loans. This has at least a couple of years or maybe more to go.

FDI deregulation is clearly working its magic and tourist arrivals seem to be going up as well both of which should bring money into our shores. Investment proposals going down is a bit strange considering the chest-thumping the govt. has been doing about the ease of doing business. Perhaps that’s yet to yield fruit.

Overall I think we are in a better space now than we have been in the last year or so with demonetisation and GST impact. Let’s see how things unfold towards the elections.

We will need to figure out & remove 2-Wheeler sales to conclude what you said?

Electricity production I think is down

Cement has shown a very rapid growth for last two month. Do we know where is consumed most? Housing, Roads etc.

Continuous increase in tourist arrival is big surprise to me. I have no knowledge about tourist arrival in India. Which country sends most people to India? Do they come mostly for medical tourist or do they visit places?

I do not know the source though. Also the growth he has mentioned is MoM or YoY is not known.