There are a few interesting triggers at play in this story where further digging is required & I am hoping that we at valuepickr can unravel!

The Co. supplies Lecithin to Nestle (perhaps for its baby food). A smarter mgt. looking for market cap would have splashed this all over the place! I have done some scuttlebutt & confirmed from Nestle that this is true. I have also gathered that Nestle is happy both with Kriti supplies as well as its mgt. However, I am struggling to determine the size of this opportunity. Nestle is known to hand-hold its suppliers & take them to the next level.

The last few years has seen a continuous disparity in soya crushing making exports of soya de-oiled cakes unviable. This has changed in the current year which is seeing a quantum jump in exports. This is largely due to a bumper soya harvest. I am again looking to understand the size of this opportunity. I am also not clear about the kind of margins in export of de-oiled cakes, but will not be surprised if they are better that refining, which has formed the bulk of Kriti’s turnover in the last few years.

Kriti has been refining & selling soya oil under its own brand “Kriti” which is well respected in the markets. A few years ago, it also started marketing sun flower oil under “Kriti” brand, by leveraging its distribution network. This throws up interesting opportunities. Does the Co. have the wherewithal to add a few more products & use its distribution network. That is something the markets would love!

The Kriti mgt. is conservative to the core. While this may have its advantages, but it does make life of us stock pickers very difficult as there are always more questions than answers, but therein lies the opportunity!

It will be nice if other Valuepickrs can contribute in unraveling this story.

Some reduction in debt is seen, which is a good sign, but yet to have an impact on interest costs.
Currently the margins are very low. Could the triggers you mention help increase the margins?
Having a strong client like Nestle would make it even more difficult… isn’t it?
Exports could face problems due to rupee appreciation. This would usually not be an issue but considered in combination with low margins, seems a big risk.

I am not able to see this company through ICICI Direct. I am told they do not have Kriti Nutrients in their stock list.

Which portal are you guys using?

Have filter some stocks out of long list and kriti nutrients is one of them , found the stock interesting wit following data
Low equity
Small company in the segment
D/E ratio at 0.44
3yrs avg. Roce at 25.63
EPS of 1.26
PE at 14

Soya prices are depressed in Madhya Pradesh. This was one of the reasons of the recent farmer protests. Indian soyameal prices are uncompetitive at the moment due to a global supply glut and low domestic productivity, so that is a negative for exports which may effect the top line of Kriti. Cheap imports of edible oil are at 70%. So the industry may be struggling to stay competitive right now.

Kriti Nutrients came out with a stellar set of numbers for the June qtr., with a marked improvement in operating margins. The last two qtrs taken together sequentially augers well. This will be the second straight year of decent monsoons & the industry is also bullish about the export prospects of de-oiled cakes. This story may be getting interesting!

India has raised import tax on edible oil to the highest level in more than a decade, the government said in an order, as the world’s biggest importer of edible oils tries to support its farmers.

The duty increase will lift oilseed prices and their availability for crushing in the domestic market, helping the country in capping edible oil imports in the 2017/18 marketing year, which started on 1 November.

India doubled the import tax on crude palm oil to 30%, while the duty on refined palm oil has been raised to 40% from 25% earlier, the government said in its order, issued late on Friday.

Indian oilseed crushers were struggling to compete with cheap imports from Indonesia, Malaysia, Brazil and Argentina, reducing demand for local rapeseed and soybeans, even after steep fall in oilseed prices.

The second increase in import tax in less than three months will push up domestic edible oil prices and support prices of local oilseeds like soybean and rapeseed, said B.V. Mehta, executive director of the Solvent Extractors’ Association (SEA), a Mumbai-based trade body.

Soybean and rapeseed prices have been trading below the government-set price level in physical market, angering farmers.

Even after the duty increase, India will need to import about 15.5 million tonnes of edible oils in 2017/18, down from earlier estimate of 15.9 million tonnes, but higher than last year’s 15 million tonnes, said Sandeep Bajoria, chief executive of the Sunvin group, a vegetable oil importer.

“The duty hike will have marginal impact on imports. India has to import due to huge demand,” Bajoria said.

what happened to the stock today

Why is it falling so badly for the second day? Are the results considered so bad?

Looking ahead, the trend is up and the price of soybeans in April is even higher.

The prices of sunflower oil has seen a marginal uptick in Q1 2017. I could not find a breakup of sales by product category, so it is difficult to decipher any further.

The next board meeting of Kriti Nutrients is to be held on July 31, 2018 for Quarterly Results

: Get the latest Currency Research Reports in PDF format 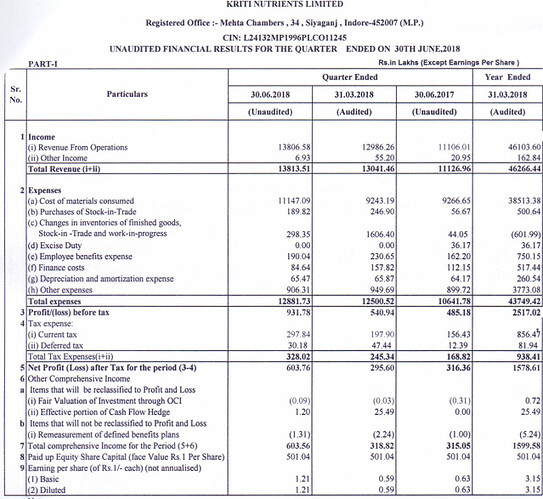 On the flip side, material cost has gone up this quarter to 80% and is expected to keep climbing in the short term

I fail to understand your statement.

Let them keep climbing, if they are indeed climbing, as long as margins/PAT climbs faster.

QoQ it has gone up from 71 to 80%. Commodity like steel has about 70% cost of material and doesn’t get more than 10 PE. Already wafer thin margins may come under pressure, not just from increase in MSP and soya prices (see futures prices) but also from players like Patanjali (which is close to buying out Ruchi Soya). Biggest segments are edible oil, followed by soymeal which are very cookie cutter. Don’t think Kriti is manufacturing value added products so that margins could be expected to improve - unless exports go up

Sorry, I still cannot understand.
I compute,
Total Revenue QoQ increase as 6%, 138 Cr v/s 130 Cr.
Material Expenses QoQ increases as 2(a)+(b)+(c), also by 6%, 116 Cr v/s 111 Cr.
Material expenses are all these components,
(a) Fresh consumption (for use in production)
(b) Stock-in-trade (very minor component, can be ignored, hardly 0.5 Cr difference)
(c) Inventory (mainly understood to be of finished product, here decrease occurs in both quarters)

There is absolutely ZERO difference in margins due to material costs (or any other reason) on QoQ basis.
In March quarter, fresh production was less and more existing inventory of goods was sold off.
In June quarter, there is simply more production.
Accounting takes care of this and shows this very clearly, by treating decrease of Inventory as an expense.
An increase in Inventory on the other hand is deducted from the expenses! 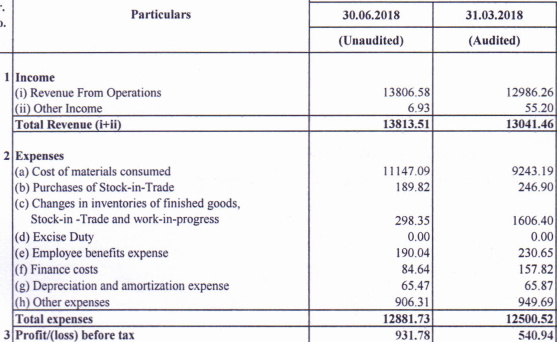 I hear you. I am looking at 2 (a)/Revenue from ops only. The key sensitivity I am looking for is raw material consumed in that quarter, i.e. soy bean prices only, so not taking inventory or stock in trade.

OK, thanks for explaining, that’s what I thought!
Simply think there is not enough data to come to any conclusion of the sort. 2 (c) difference more than accounts for the 10%. Do not think it can be simply ignored.

AHMEDABAD: A new amendment in the Food Safety and Standards Act (FSSAI) mandates that the total polarized compound (TPC) value in edible oil must be l.